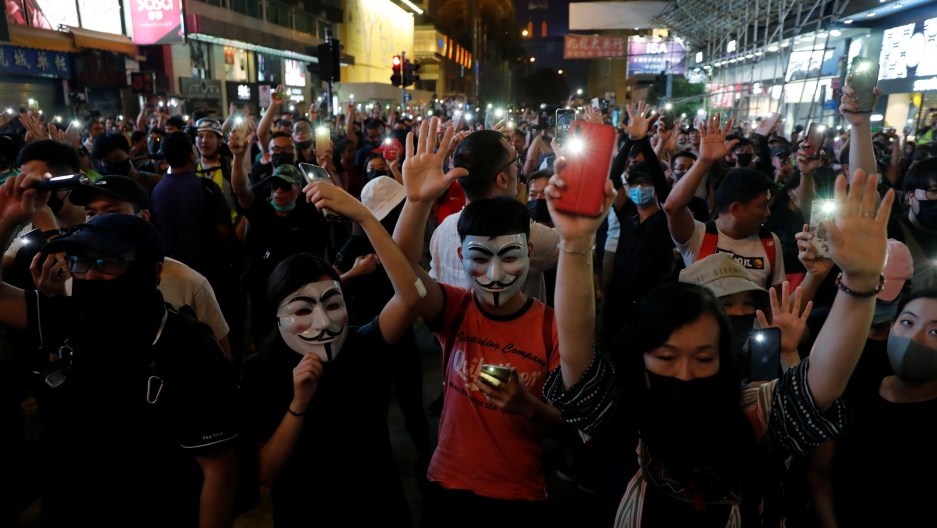 After nearly five months of street protests, the economy in one of China's most important business hubs is slowing down. Retail sales are plunging. And the US-China trade war is taking a financial toll.

The demonstrations in Hong Kong have been led mostly by young people protesting the way China governs the territory. It's easy to make a historical comparison to 1989 when young people in Beijing's Tiananmen Square also protested. 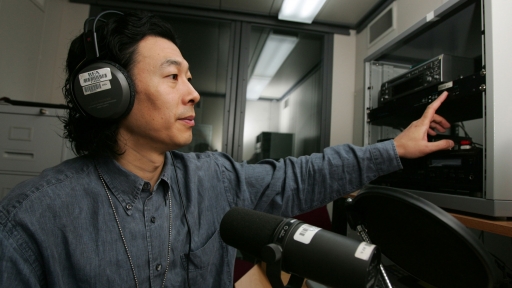 Chinese labour activist Han Dongfang speaks on a radio show at his studio in Hong Kong in a 2004 file photo.

Han Dongfang was among those in Tiananmen Square 30 years ago.

After the bloody crackdown, he spent a couple of years in prison. He later fled to Hong Kong.

Dongfang spoke to The World's Marco Werman about his view of the protests that have taken over Hong Kong.

Now, he's a labor organizer based there. And he's watching and supporting this young generation of protesters. Their movement is different from Tiananmen in one crucial way, he says.

"In Beijing, 30 years ago, we were begging for something called freedom that we never tasted, but once we were smashed and we just gave up — because we never tasted it," Dongfang said. "Today, the Hong Kong young people — what they are doing is not begging and asking for freedom, as they have been living in freedom. Now, someone is attempting to take it away. So, that is the fundamental difference. That is what I believe — these people will never give up."

Han Dongfang: I am not really speaking to them. I am participating in every major protest. I am in the streets. I observe them, and I learn from them. Because if I well remember in 2014, I saw these young people break into the highway and I ran to them and I said, "Look, you've got to get out from the highway, you are giving them excuses to shoot you." And I came from 1989, Tiananmen Square, that's what happened at that time. They get excuses, and they start shooting people. And people don't want to listen to me, and I feel kind of sad about, you know, they are really not taking their lives carefully and they are really taking great risk.

But Dongfang, aren't the protesters today also giving the authorities plenty of reasons to kind of stage reprisals? I mean, subway stations have been set alight, they've occupied the airport. I mean, they're giving, it seems, the police a lot of reasons to crack down on them.

Yes. You can say today, even more than 2014, even more than 30 years ago in Tiananmen Square, that's what the protesters are doing. But the fundamental difference is the protesters, the mentality and the courage. Thirty years ago, we were fighting for something in our dream. We never knew it — we never tasted it. If we didn't get it, then we didn't really lose anything. But nowadays, these people, from my observation in the streets, every major protest, I can see a determination from their face, from their body language, and especially, this is joined by man and woman, young man and woman and woman are not following the man and women are on their own. So, all over and in the street, they — in their face, in their body language — you can read, they are ready to burn together if it burns.

"So all over and [in the] street, they in their face, in their body language, you can read they are ready to burn together if it burns."

So, Dongfang, what is your advice to the Hong Kong protesters at this moment, and where should they steer that courage?

I'm afraid I don't have any strategic suggestions for them because I don't have it. I am busy learning from them about the creativity of organizing different activities and protests every day during the week and evening and day. So, this is very new to me.

Related: PHOTOS: The masks of the Hong Kong protests

US Vice President Mike Pence says America stands with Hong Kong, and he criticized China for curtailing the rights and liberties of Hong Kongers. Does that help the protesters or does it just add to the Chinese government's claim that this whole protest movement is a Western-inspired, separatist movement?

Oh, it definitely helps the movement at the protest in Hong Kong and to make the Chinese government think twice about what to do. But I have a very serious question here. Mr. Pence or Mr. Trump, are they taking this position as a strategic move to make themselves in a better position during the trade deal, trade talks, as a chip or are they are taking it as principle — that no matter what, even if there is no trade war, they will take this human rights and democracy matter seriously? What about if the US-China trade deal goes well? Will they pull back? There will be no pressure, there's no concern and what will the Hong Kong people do with that?

Related: How Hong Kong's protests are affecting its economy

So, help us with this one final question. Despite some of the police crackdown and protesters disrupting business and mass transit in Hong Kong, it seems many Hong Kongers have not abandoned or given up on the protesters and their actions. Why do you think that is? What does it tell us?

You know, Hong Kong people have enjoyed the freedom. There is not much democracy in the past up to this point. But enjoy the freedom; freedom means you don't have to realize that every day and morning when you wake up, you say, "I'm in freedom!" No, the beauty of freedom is you don't realize that every day. You don't have to pay attention. But once someone attempts to take it, whether you're a businessperson, big business, small business, big like Mr. Li Ka-shing (mega-investor believed to be the richest man in Hong Kong) or small like the corner street, you open a small restaurant. These people, they all suddenly feel their freedom is maybe facing a risk. And this is what brings people together. You lose the same things that you enjoy. You didn't really have to feel it every day. Now, you feel the same danger. Even the people walking in the street to protest for the same things are fearful of losing freedom, and they're not necessarily all left or right or in the middle or what. But they are gathered together on this one same interest and fear, which is fearful of losing freedom. So, that's my explanation about why Hong Kong people, even the businesspeople, they lose some business, they're not happy. But they'll still tolerate this because they know that ahead of them, there will be bigger things to lose.

Related: The memes of the Hong Kong protests