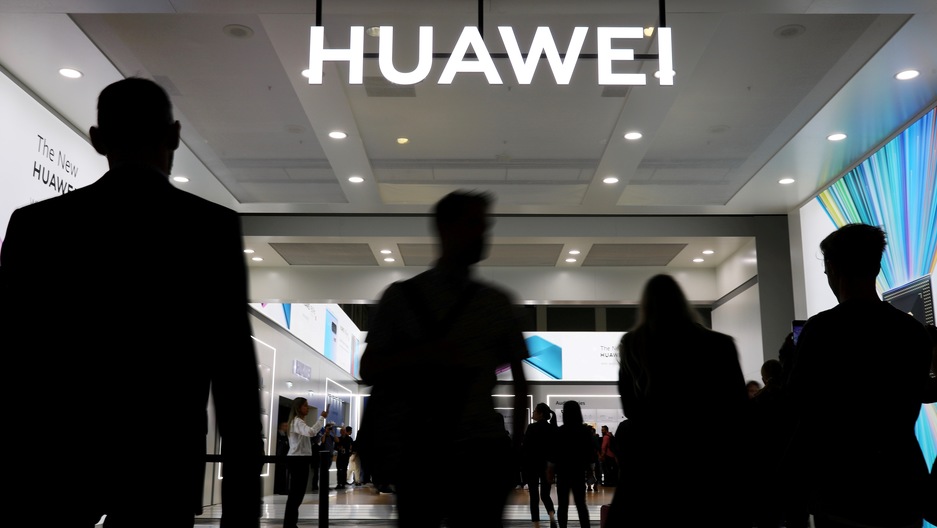 The Huawei logo is pictured at the IFA consumer tech fair in Berlin, Sept. 6, 2019.

The Federal Communications Commission will vote Friday on a set of proposals that would ban certain American carriers from using equipment made by Huawei Technologies Ltd., a Chinese company that US intelligence officials say poses a national security threat.

The first measure would prohibit American companies from using federal subsidies to buy equipment made by Huawei. The second would require carriers that already use the Chinese equipment in their networks to remove and replace it. The proposals also target equipment made by a second Chinese company, ZTE Corp.

Currently, about a dozen small, mostly rural carriers rely on this Chinese equipment to deliver internet, phone and other services to customers. Pennsylvania-based Laurel Highland Total Communications Inc. is one of them. The company’s CEO, Jim Kail, said they’ve been using Huawei equipment since 2014.

“It was a very large company hungry to do business with a small company like ours. Generally ... large carriers like that — large providers — they don't have any interest. The numbers are too small,” Kail said, adding that he chose to use Huawei equipment because he found the company’s prices attractive.

It seemed like a sensible business decision at the time. But not so much anymore.

“We're talking about potentially having [to] rip and replace that [Huawei] equipment, then swap it out with something else.”

“We're talking about potentially having [to] rip and replace that [Huawei] equipment, then swap it out with something else,” Kail said, a process he estimates would cost his company about $1 million and cause major disruptions because it would require him to divert crews working on networks in other underserved areas of the state.

Kail said Huawei’s equipment has been “perfectly reliable.” But US intelligence officials say it poses a security threat.

Testifying before Congress last year, FBI Director Christopher Wray said the existence of Huawei and other Chinese equipment in American networks gives China the capacity “to exert pressure or control over our telecommunications infrastructure. It provides the capacity to maliciously modify or steal information. And it conducts the capacity to conduct undetected espionage.”

The US campaign against Huawei began around 2012, when a congressional investigation concluded that incorporating equipment into American networks could threaten US national security because it could be used for spying on Americans. Things intensified under the Trump administration, which launched an unprecedented campaign to keep Huawei out of 5G networks — the newest generation of mobile networks — and get US allies to follow suit.

But security experts say the US government has provided little proof to back up allegations against Huawei.

“So much of the intelligence, if it exists, has stayed classified about what these security threats are. So, it's very hard for us outside government to really determine are there actual, credible, serious current security threats coming out of Huawei technology or is this just about kind of the possibility of that happening in the future and the fear of China's economic growth?” Wolff said.

The British government recently conducted its own assessment of Huawei technology. In a report of its findings published earlier this year, it identified security flaws in Huawei technology. But there’s “no evidence … that those vulnerabilities are any worse or any more severe than what you would see in any other kind of network equipment, all of which has security vulnerabilities,” Wolff said.

What does worry Wolff and other security experts is the close relationship between China’s government and its private sector.

“There is no clear distinction between the government and the private sector in China in the way that we recognize it in the United States, and that's understandably very concerning to people who are thinking about whether or not what way is going to be beholden to the Chinese government moving forward.”

“There is no clear distinction between the government and the private sector in China in the way that we recognize it in the United States, and that's understandably very concerning to people who are thinking about whether or not what way is going to be beholden to the Chinese government moving forward,” Wolff said.

Huawei has denied allegations it could be forced to hand over access to data and systems to the Chinese government.

“It's really a misstatement to say that Huawei has a particularly close relationship with the China government,” said Andy Purdy, Huawei USA’s chief security officer. “There is nothing that they do or can do to force us to do anything, particularly where we don't have access to the kind of data that the US government's worried about.”

Meanwhile, as he awaits Friday’s FCC vote, Kail said he feels caught in the middle.

“We're patriots. My allegiance is to my country here, not to China,” he said. “If there was truly a risk, if there was truly a threat, show me. Show me the evidence. We're not going to be jeopardizing our networks just to make a buck.”

So far, he said he hasn't seen that evidence. If he had, he would've ripped out the Huawei equipment from his network already.