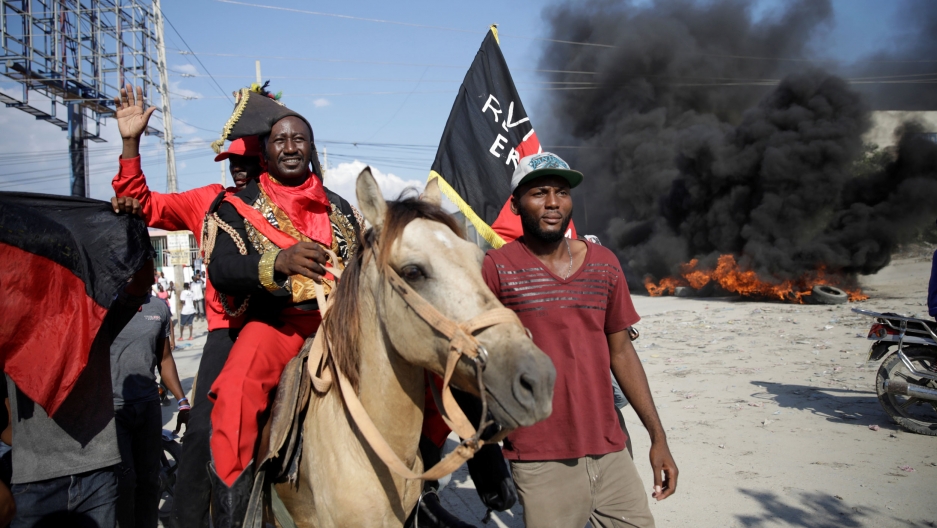 A man dressed as Haitian Revolution leader Jean-Jacques Dessalines rides a horse together with Piti Desalin political party president, Moise Jean-Charles, during a march to demand the resignation of Haitian President Jovenel Moise, in the streets of Port-au-Prince, Haiti, on Oct. 17, 2019. Oct. 17 marks the anniversary of the killing of Haitian Revolution leader Jean-Jacques Dessalines.

A radical, unlikely figure has emerged as the icon of Haiti’s months-long protests against President Jovenel Moïse, who stands accused of embezzling millions in public funds.

That figure is Jean-Jacques Dessalines, the black Haitian revolutionary who defeated the French to free Haiti from colonial rule in 1804. By summoning Dessalines, Haitian protesters implicitly contrast the achievements of that revolution — freedom, universal citizenship and racial equality — with the disappointments of the Moïse government.

Dessalines wrote a radical constitution that eliminated racial hierarchy, established equality before the law and instituted freedom of religion in Haiti.

One of Haiti’s opposition political parties is called “Pitit Dessalines” — Children of Dessalines.

Related: From the ashes, a Haitian business owner wonders, 'How long can we continue?'

When demonstrations began last year, simple stenciled images of Dessalines wearing a military hat and holding a protest sign appeared on walls across the capital. This year, at several marches, men in revolutionary-era garb have ridden the streets of Port-au-Prince on horseback. They were waving Dessalines’ red-and-black version of the Haitian flag inscribed with the words “Viv Lib ou Mouri” — “Live Free or Die.”

A commitment to equality

I am writing a biography of Dessalines, who has long been overshadowed outside of Haiti by the formerly enslaved revolutionary leader Toussaint Louverture, who is often heralded as Haiti’s founding father despite dying before independence.

My research on the diplomacy and state-building practices of Dessalines, conducted using archives from the Caribbean, North America and Europe, shows the Americas’ first black head of state to be a groundbreaking enlightenment thinker and revolutionary leader.

At the time of his birth, around 1758, Haiti — then a French Caribbean slavery-based colony called Saint-Domingue — was the most lucrative colony in the world. By the time of Dessalines’ 1806 assassination, it was the Americas’ first sovereign abolitionist state.

Though European and American powers refused to recognize the young nation, Dessalines steadfastly rebuffed any concession to world powers that might undermine Haiti’s hard-won independence.

In early 1804, Dessalines even declined to sign a treaty with the British governor of Jamaica that would have given Haiti diplomatic recognition. The reason: It would have limited Haitian sea travel and allowed the British to occupy a strategic fort.

A few months before, when Dessalines discovered that white Frenchmen were plotting to overthrow his government, he ordered the execution of all remaining French people in Haiti. Some women and children were targeted in these public executions.

White world leaders took note of Dessalines’ gruesome retaliation against the French, which may have contributed to Haiti’s diplomatic isolation in the early 19th century. Haiti’s independence would go unrecognized until 1825, when France finally conceded that it had lost the war.

To maintain Haitian autonomy, Dessalines’ constitution also declared that only Haitian citizens and the Haitian government could own land and property in Haiti.

But he also established a policy of offering refuge in Haiti for the downtrodden and oppressed of the Americas. In the decades to come, Haiti would welcome 13,000 African Americans who fled racial discrimination in the southern US and many others fleeing slavery in the Caribbean islands.

Dessalines is the only Haitian revolutionary to have been incorporated into the Haitian religion as a spirit, named Ogou Desalin. Among Haitian spirits, the Ogou are known as warriors. Ogou Desalin is the warrior who defends liberty. 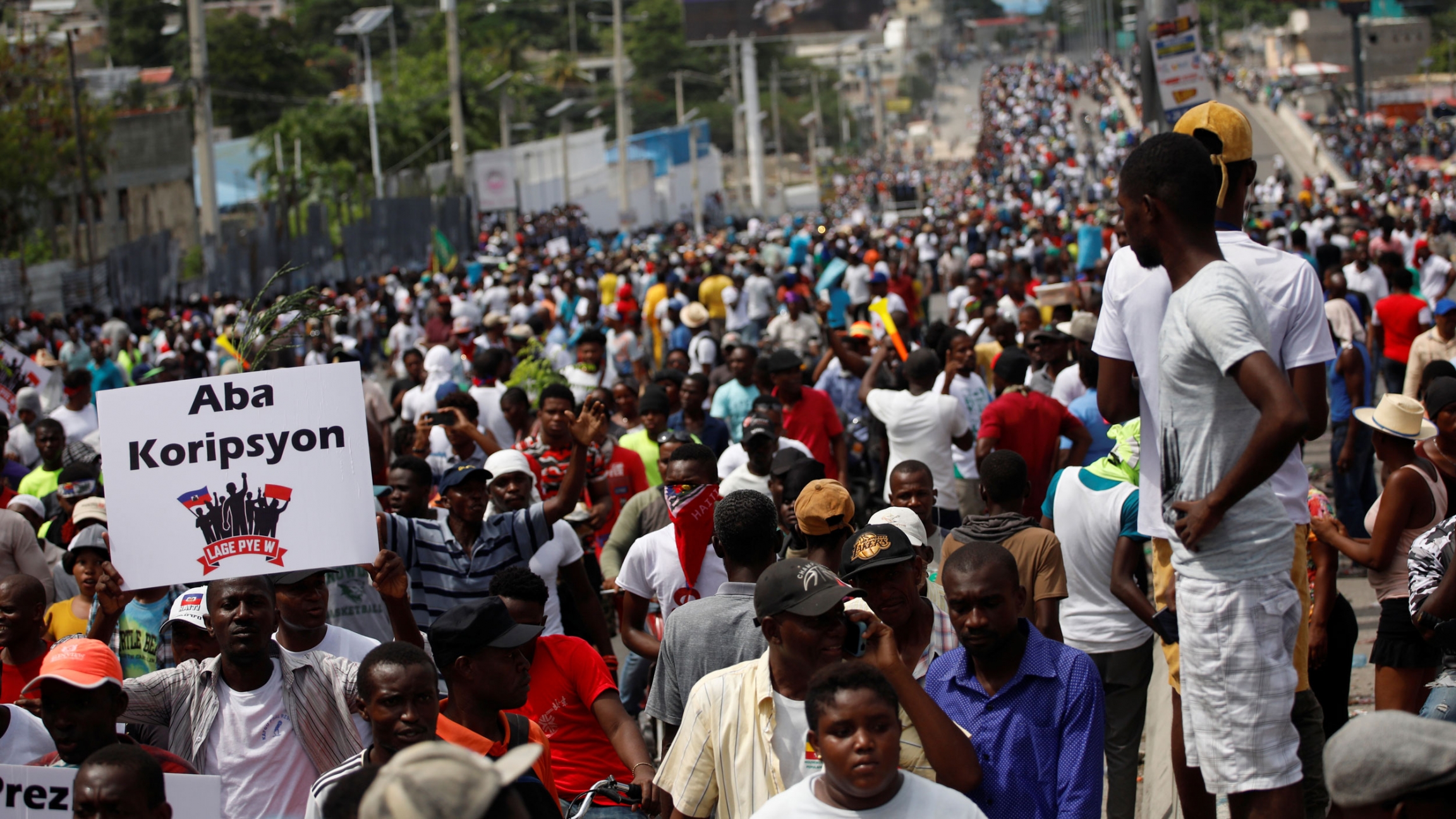 Protesters march during a demonstration to demand the resignation of Haitian President Jovenel Moise, in the streets of Port-au-Prince, Haiti on Oct. 20, 2019.

This legacy underpins Haitians’ desire for a new kind of independence — an existence free of predatory leaders and reliance on international aid that comes with strings attached.

After the 2010 earthquake, many Haitians hoped that the devastation would inspire positive change. Instead, the influx of foreign aid and global investment in Haiti opened the door for the corruption that has tainted Haiti’s last two leaders.

Moïse’s predecessor, Michel Martelly, departed office amid scandal in February 2016 without a successor in place, leaving the country with a provisional government. Moïse, a businessman who was Martelly’s chosen successor, became president in February 2017 with 56% of the vote.

Related: Inside the Kingdom of Hayti, ‘the Wakanda of the Western Hemisphere’

To deter the fraud that had marred recent presidential elections in Haiti, monitors from the Organization of American States supervised the vote. But many Haitians still doubted that Moise’s victory was legitimate.

By late 2017, Haitians had learned that Moïse was implicated in an embezzlement scheme involving US$2 billion meant to finance infrastructure development in the country. The pillaged funds came from an international organization called PetroCaribe, which sells Venezuelan gas and oil to Caribbean countries at reduced cost to free up money for development. Under Martelly and Moïse, Haiti’s extra money seems to have disappeared.

To make matters worse, Venezuela’s own political and economic crisis has rendered the PetroCaribe program unable to meet Haiti’s oil and gas needs, creating an acute gas shortage. In mid-2018, Haiti’s government raised the cost of gas by 38%.

Saying they are suffering the direct consequences of government corruption, angry Haitians have demanded Moïse’s resignation. The president, who has largely retreated from the public eye, refuses. 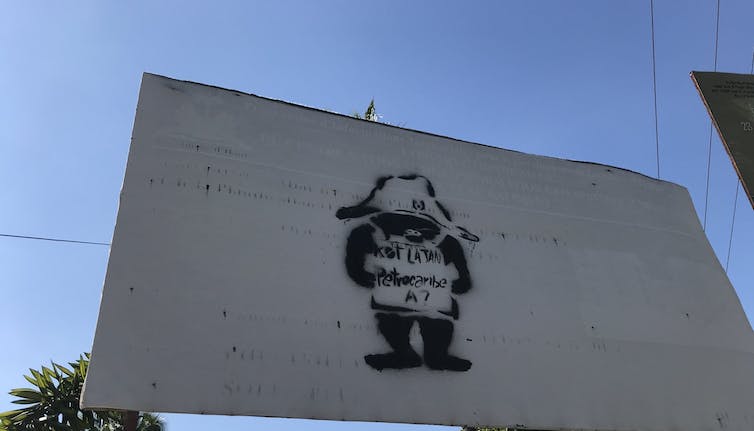 Dessalines’ track record as a leader was not perfect, either.

Shortly after he overthrew French rule, Dessalines declared himself emperor of Haiti and revived the plantation system that revolutionaries had just burned to the ground. Field workers were called “cultivateurs,” and they received some pay or a share of their crop. However, they were bound to a specific plantation.

This form of coerced labor resembled the US sharecropping system and others that arose across the Americas after slavery ended.

Two centuries after his assassination in 1806, some still consider Dessalines a barbarous despot. To others, he is an uncompromising freedom fighter.

Both of these conflicting portrayals reduce Dessalines to a one-dimensional character. The protesters inspired by his legacy aren’t necessarily ignoring Dessalines’ shortcomings. Instead, they are championing his unwavering determination to rid the country of foreign rule so that Haitians could live “by ourselves and for ourselves.”