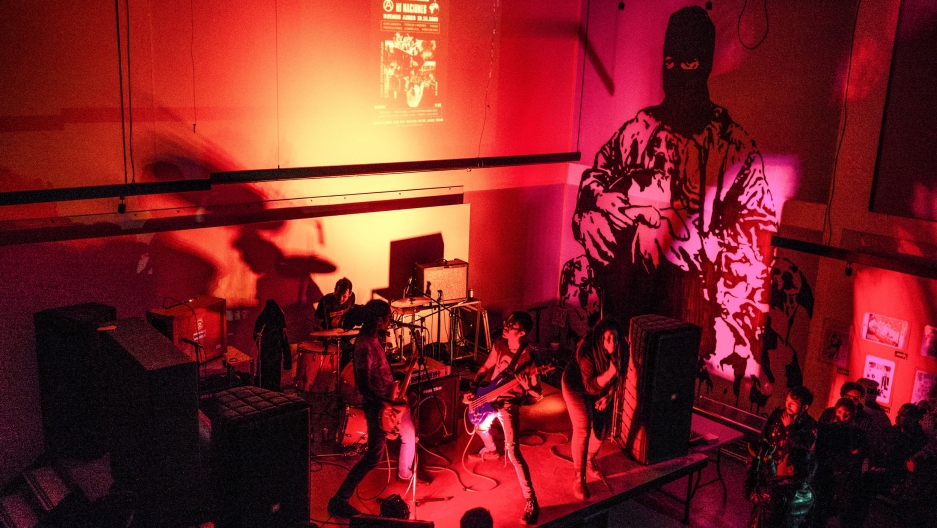 The guitarist stops fiddling with his pedals as the lead singer, wearing long dreadlocks and all-black denim, approaches the edge of the stage.

“This one is dedicated to the police,” she tells the crowd, before stepping off and joining them.

It’s a Saturday night in a lofty new cultural space in a gritty neighborhood in Bogotá, Colombia’s capital, and of the eight bands on the line-up, four hail from neighboring Venezuela.

Bogotá has long had a big underground punk movement — expressions of counterculture in a country plagued by corruption, inequality and narco-related violence. But the scene has exploded over the last year with more bands and concerts than ever, say followers.

Its recent growth aligns with the mass exodus of Venezuelan punks — some veteran musicians, others newer to the scene — who have arrived in Bogotá over the past few years.

The mosh pit of flying elbows and Doc Marten boots speed up and a fight breaks out between two young women, but most of the spectators are too engrossed in the music — or too intoxicated on cheap fermented sugar cane — to notice. 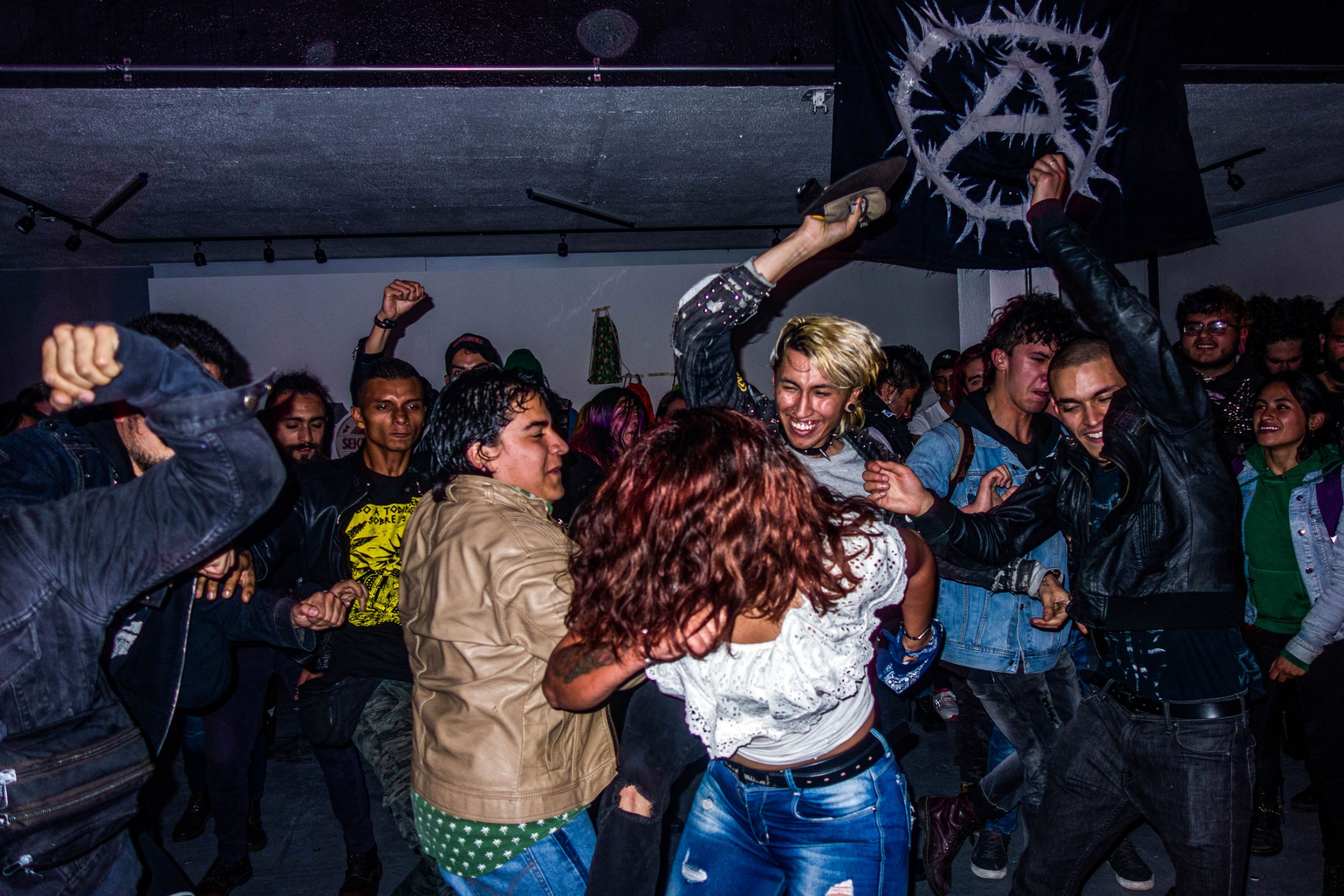 Punks mosh to the sound of Venezuelan band Doña Maldad at Antípoda club on Oct. 19, 2019.

“Look at me in my eyes without fear, without stars your chest ...” González howls.

González, 40, from the city of Puerto La Cruz in eastern Venezuela, is one of those arrivals, having walked across the border with her partner and guitarist of their band, Exilio, in July 2017.

Like most members of Venezuelan punk bands in Bogotá, she decided to leave when her country’s crisis became unbearable. In González’s case, she says the constant stationing of an armored car parked in her neighborhood to intimidate residents and the imposition of strict curfews during a period of heavy protests in summer 2017 pushed her over the edge.

“More than not being able to play in a band, it’s not having electricity, food to eat or water to drink. ... And then there’s the heavy violence: You can go out, but you don’t know if you’re going to come back.”

“More than not being able to play in a band, it’s not having electricity, food to eat or water to drink,” she says. “And then there’s the heavy violence: You can go out, but you don’t know if you’re going to come back.”

Exilio was formed by three Venezuelan migrants who came together in Bogotá after leaving their friends and family behind to seek a new start.

As the political and economic crisis under Nicolás Maduro has intensified in recent years, over four million people have fled widespread shortages of food and medicine, rolling blackouts, and indiscriminate violence.

Today’s crisis has produced a new wave of angry youth expressing their rage through heavy guitar riffs and howling vocals. They follow in the footsteps of punks who produced some of the fiercest bands in Venezuela in response to political turmoil during the 1990s. But the unprecedented rage has completely transformed the subculture.

Young people have become ground down by the extremity of the crisis, says Johnny Castro, bassist and singer of the band Apatía No, another member of the diaspora that has made the Andean capital its new home.

“You can be a punk in your own home, and you can wear the clothes, but outside it’s pretty hard to be a punk when you don’t have the money for guitar strings,” he says.

Making ends meet is difficult, but then there’s the challenge of selling concert tickets when Venezuela’s minimum wage is $2 a month. Playing electric guitars during a power outage poses another challenge.

Some of the biggest venues in Venezuela have been forced to close and some of the largest bands have been exiled across the globe.

Those that remain tow the chavista line to get state funding or play government-organized gigs to promote the Maduro regime, Castro says.

Apatía No’s guitarist is in Germany, their drummer is in Mexico, and Castro, the singer and bassist, lives in Colombia. They only reunite when touring abroad in Europe or the US.

“While many musicians dream of touring the world, Venezuelan bands dream of going home."

“While many musicians dream of touring the world, Venezuelan bands dream of going home,” Castro says.

But while the young musicians are ground down, they are not broken.

In Venezuela, some bands continue to play thanks to support from a nongovernmental organization promoting human rights, Provea.

The NGO helps many who could otherwise not do so record, produce, release and distribute music.

Their two “Rock Against The Dictatorship” compilations have allowed 32 bands to record and voice their rage against the government, and their Music For Medicine program — in which fans swap spare medicine for CDs — is procuring much-needed medical supplies for those in need.

Provea's programs promote human rights through music and culture at a time when the crisis is killing it, says its founder, Rafael Uzcátegui. The goal is to create room for resilience and resistance against a dictatorship when it is needed most.

“It’s very important to help people from our country to keep making art and culture, show their talent and, through expression, help people talk about the situation.”

“The lack of public security has reduced public space and the right to recreation to a bare minimum,” he says. “It’s very important to help people from our country to keep making art and culture, show their talent and, through expression, help people talk about the situation.”

But criticizing the regime inside Venezuela poses its risks. On Sept. 19, Uzcátegui was awaiting the delivery of printed CD inserts at his Caracas office for their latest album, a tribute to the country’s punk legends. But the inserts never arrived.

The material was confiscated by national security forces for containing a subversive image shot by punk photographer, Nelson Garrido, which depicts a uniformed military officer with a pig’s head and a pocket stuffed with US dollar bills. The delivery driver was detained and questioned for 24 hours in the infamous Helicoide Prison before Provea helped secure his release.

In Colombia, the bands are using their political freedom and relative economic stability to criticize the crisis and raise awareness.

Exilio’s González and guitarist Carlos Equiz say crossing the border changed their “chip”: suddenly, once far from the chaos and state propaganda, their perception of normality was restored. They were furious.

Their previous band, which had a more experimental sound and “celebrated chaos as part of nature” no longer served “the energy and rage” they felt inside them, so they formed a new one. Instead of celebrating the unbearable disorder, it opposes it.

“I have played in a lot of political bands, but this is the most political yet, and the angriest ... You can’t talk about stars, suns and planets when there is a president killing people.”

“I have played in a lot of political bands, but this is the most political yet, and the angriest,” González says. “You can’t talk about stars, suns and planets when there is a president killing people.”

Now their songs address issues ranging from exploitation of the environment to closed borders and police brutality.

While those in Venezuela fear the watchful eye of the national intelligence service, Exilio is feeding off newfound creative freedom. 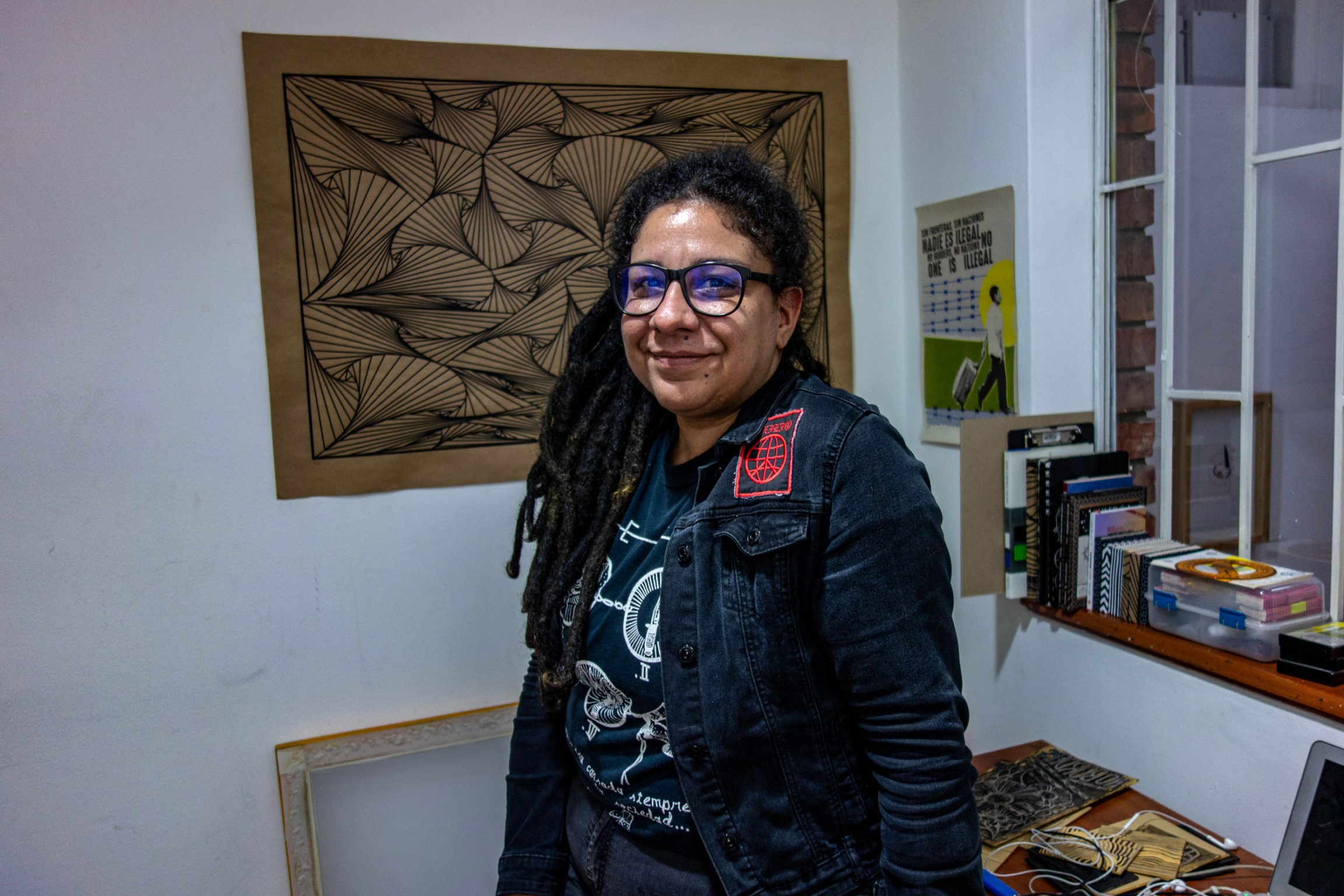 Susana González, lead singer of Exilio, in her office at Casa Rat Trap, the cooperative arts space in which she works in Bogotá, Colombia, Oct. 19, 2019.

Gonzáles knows many at home continue listening to their music and hopes it will “wake them up,” making them as critical as they are.

For Castro, it’s about getting the word out across the world through international concerts and translated lyric sheets.

“People come up to us in Germany and say ‘I can’t believe this is happening,'” he says.

The process is cathartic, expressing the crisis from a first-hand perspective without “victimizing” those who suffer from it, González says.

But it’s also a way to fight back.

“Some use the internet to express themselves, some write, but we take advantage of the fact that we are here and nobody can touch us by playing music,” she says. “Guns or other weapons aren’t necessary to resist, fear isn’t the only tool to fight back … It’s better when people share feelings."