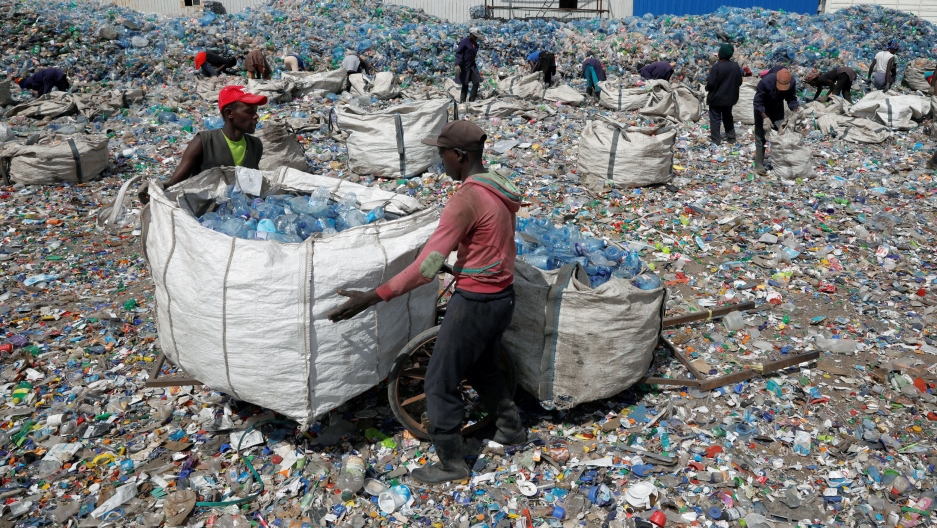 Employees sort plastic bottles at the Weeco plastic recycling factory at the Athi River industrial zone near Nairobi, Kenya, on May 15, 2019.

People have come to expect that as our economy grows, so does our use of resources — a trend many have been worried about since the environmental movement began. Intense concern about whether the Earth can handle our consumption habits have also helped to popularize news stories like the Great Pacific Garbage Patch, as well as fictional narratives like Pixar’s film “WALL-E.”

But the trend we think is inevitable may not be, according to Andrew McAfee, a research scientist at the MIT Sloan School of Management. In his book “More From Less: The Surprising Story of How We Learned to Prosper Using Fewer Resources - and What Happens Next,” McAfee argues that we’re using fewer resources now than we did 25 years ago, while still maintaining economic growth.

“What the environmental movement got wrong was this notion that our growth trajectory itself was going to kill us,” McAfee said. “That’s absolutely not right. We’ve continued to grow since 1960, while lowering pollution, taking care of the animals around us, and taking fewer resources from the planet.”

What are we using less of? Well, lots and lots of things. Aluminum, cement, copper, gold, fertilizer, and paper — for starters.

This phenomenon is called “dematerialization.” And although such changes are better for the planet, McAfee says companies aren’t decreasing their use of resources out of the goodness of their hearts.

“When you or I want a beer, want a soda, we don’t value the aluminum at all. The beverage companies would rather save on that spending category, so it makes sense for them to buy very expensive computerized design systems, sit a couple engineers down in front of them and say, ‘Figure out how to make that can lighter,’” McAfee said. “It’s the easiest thing in the world to understand — materials cost money. It’s a complete economic no-brainer for them.”

Another contributor to Americans’ decreased use of resources is the invention of the smartphone. Though we used to buy alarm clocks, camcorders, cameras, calculators, GPS devices, and tape recorders, most of us now rely on our phones to perform all those services.

McAfee recalls being shocked when he discovered the connection between our more efficient use of resources and economic growth. He had always believed that growth was dependent on an ever-increasing hunger for raw materials.

Related: As China gets tough on recycling, will America get cleaner?

The environmental movement, which began getting attention around the first Earth Day in 1970, pushed the “reduce, reuse, recycle” mantra. But according to McAfee, activists focused too heavily on recycling.

“It’s gone too far,” McAfee said. “I think we’re focusing too much on recycling materials [when] we do not live on a scarce planet.”

Recycling, he points out, has both an energy cost (trucking materials places, melting them down, etc.) and a dollar cost (which tends to come out of municipal budgets).

Recycling initiatives aren’t even seeing much impact, according to a 2017 study, which found that despite recycling’s popularity, only about 9% of plastics are being recycled.

Related: Your 'recycled' laptop may end up in an illegal Asian scrapyard

Something the environmental movement did get right, McAfee believes, was a laser focus on pollution.

“Markets don’t naturally solve pollution on their own,” he said. “If I own a factory on a river and you live downstream from me, and there’s no regulation in place, yeah, I’m going to pollute. Cleaning up costs me money.”

The key to making companies cleaner, according to McAfee, is using well-placed policies and the nature of capitalism to push innovation.

“Forbidding greenhouse gases is probably not feasible, but what we can do is make them expensive with tax mechanisms, then watch the innovation happen,” McAfee said. “[We can] watch all kinds of industries and companies come up with ways that they didn’t know about, that no one knew about, to make total greenhouse gas emissions go down over time.“

McAfee emphasized that fusing the power of capitalism with the clear costs of pollution is key to tackling global warming.

Related: Here are all your burning questions about recycling, answered

“Swinging back into greater pollution is a terrible idea. You have trouble making the argument that oil and gas companies are so strangled by regulation these days that they can’t make any money. And given the potency of these greenhouse gases, we have to increase monitoring and penalties.”