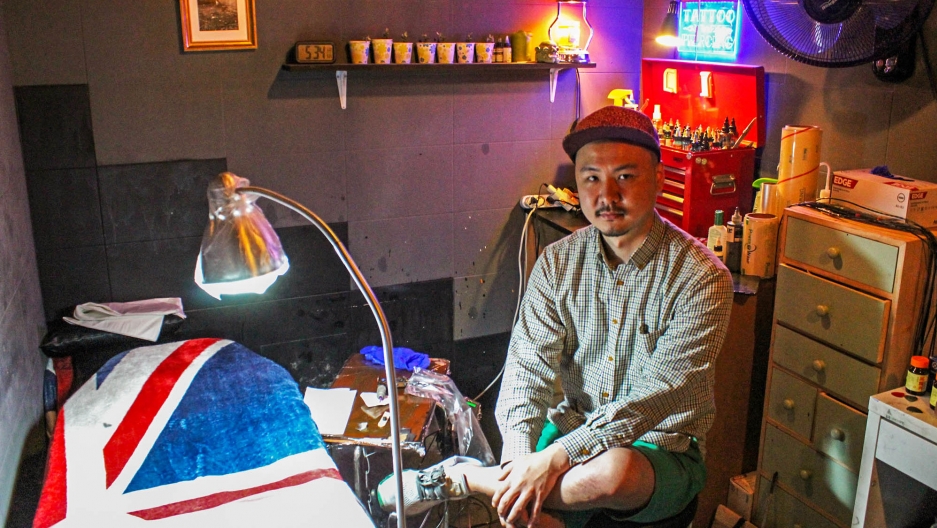 Han Tae-sun sits inside of his tattoo studio called Sunny Ink in Itaewon, a neighborhood in Seoul, South Korea.

Sitting inside a basement studio along a winding alley in Seoul, South Korea, Sunny Ink Studio owner Han Tae-sun revs the needles of his tattoo gun and talks about his job. He may not have formal training, he says, but he still gives tattoos the safe way — rubber gloves and all.

“Everything is covered. We wash these machines with a high temperature cleaner every time,” Han said against the backdrop of a punk rock, neon pink sign, with oddly paired jazz music playing from the waiting room. “I mean, they say hospitals are clean, but I’d say tattoo shops are much cleaner.”

Han is a successful artist making a living from Seoul’s burgeoning tattoo scene, but he is more or less forced to hide in plain sight. Sunny Ink Studio is searchable online and visible from the street, but Han’s work is still technically illegal — since 1992, the South Korean government has arbitrarily enforced a law that limits the act of giving tattoos to medical professionals. Those like Han, who puncture skin as artists, but not as doctors, are at risk of losing their livelihoods to the law at any time.

“Giving a tattoo is just like painting a picture and selling it to somebody. Applying those medical laws to these tattoos — it just doesn’t make sense to me.”

“Giving a tattoo is just like painting a picture and selling it to somebody,” Han said through an interpreter. “Applying those medical laws to these tattoos — it just doesn’t make sense to me.”

South Korean tattoo art is famous all around the world, and it’s mostly known for its distinct, intricate, miniaturized style. Millions of Instagram users follow prominent Korean tattoo artists online. Some tattooists even draw tourists to Seoul or travel the globe while booking foreign customers. Yet, South Korea’s burgeoning body art scene still often remains untaxed, unregulated and unprotected — and some artists, however few, have faced random crackdowns from police.

Related: Why are so many Korean karaoke joints going silent?

Song Gang-seop, 54, is one of those artists. He’s the head of the Korea Tattoo Association, and now works a side hustle with his son inside of a nondescript office cluttered with old exercise equipment, motorcycle models and scattered books near his computer. Song ran a tattoo studio in the Seoul area for more than a decade. Suddenly, a few months ago, police raided his business and shut him down without reason, he says. Song believes a disgruntled customer must have complained to law enforcement.

“There are a lot of cases of customers coming into the studio demanding certain tattoos or asking for a refund or just threatening us and saying, ‘Hey, if you don’t [comply], I’m going to report your business,’” Song said through an interpreter. “[Police enforcement] is almost like it depends on the police officer … If they feel like they are going to enforce the law, they do it. But if they don’t feel like it, they don’t.”

Song has organized protests for years calling for the government to more freely license tattoo artists, but has made little progress. According to Song, thousands of tattoo artists are working in South Korea illegally, and those whose studios get shut down usually end up moving shop elsewhere. But for him, he’s not sure if continuing his business is even worth it anymore.

“It feels devastating, seeing my studios getting closed and others don’t. But I mean, that’s what it is — what can we do about it?” he said.

Part of the problem, however, is South Korea’s long history with stigmatizing body art. Many South Korean saunas and public swimming pools used to bar those with tattoos from entering, and celebrities still often are asked to bandage or cover their tattoos when appearing on network television. (Singer and artist Jay Park has publicly spoken out against the censorship of his tattoos, for example.)

“I actually didn’t like tattoos at first because of the culture around them. There are lots of stereotypes about tattoos, like the idea that only gangsters get them,” Song said, adding that the younger generation sees tattoos very differently. He referenced a Korean soccer player whose tattoo went viral last year after fans realized that it was a loving portrait of his wife.

“People are getting this new cultural idea that tattoos are cool, and that even famous celebrities have tattoos.”

“People are getting this new cultural idea that tattoos are cool, and that even famous celebrities have tattoos,” Han added.

For now, tattooing is still only legal among doctors and licensed medical professionals, but laws are slowly changing. Earlier this month, the South Korean government announced that it will soon begin allowing nonmedical professionals who earn a special certification to legally perform permanent makeup tattoos, such as tattooed eyebrows and eyeliner.

But from Song’s point of view, tattoo artists are facing more than unfair vulnerability to their businesses — they’re also facing a crackdown on their freedom of artistic expression.

“Please treat me as an artist — not as an illegal worker or doctor,” he said.