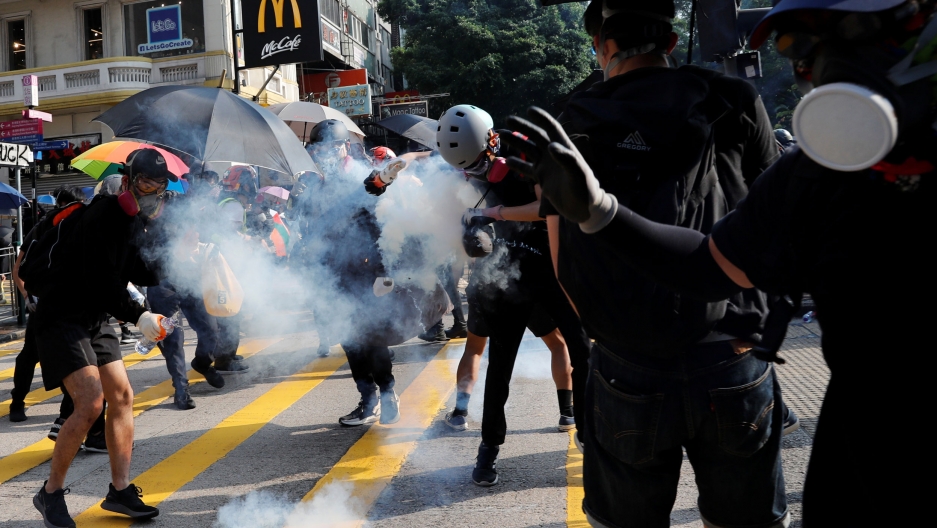 An anti-government protester hits by a tear gas canister during a protest march in Hong Kong, China, on Oct. 20, 2019.

An alarming spread of street protests and civil unrest across the world in recent weeks looms large on the radar of financial markets, with investors wary the resulting pressures on stretched government finances will be one of many consequences.

If, as many fear, the world is slipping back into its first recession in more than a decade, then the root causes of restive streets will only deepen and force embattled governments to loosen purse strings further to fund better employment, education, healthcare and other services to placate them.

Forced fiscal loosening in a world already swamped with debt and heading into another downturn may unnerve creditors and bond holders, especially those holding government debt as an insurance against recession and a haven from volatility.

"Protests per se are unpredictable for investors by definition and fit a pattern of rising political risks that have affected market perceptions in almost all geographies," said Standard Chartered Bank strategist Philippe Dauba-Pantanacce.

"Investors will get more nervous when they see that a country’s IMF package or investment promises are conditioned on fiscal consolidation and that the first austerity measures are followed by massive protests."

More broadly popular pushback against debt reduction and austerity raises serious questions about how still-mushrooming debt loads can be sustained, even after the massive central bank intervention to underwrite it in recent years.

Many also fear the feedback loop.

According to the International Monetary Fund this month, a global downturn half as severe as the one spurred by the last financial crisis in 2007-9 would result in $19 trillion of corporate debt being considered "at risk" — defined as debt from firms whose earnings would not cover the cost of their interest payments let alone pay off the original debt.

Marc Ostwald, global strategist at ADM Investor Services, said he saw many of the protests as "straws that break the camel's back" — tipping points in a broad swathe of long-standing complaints about inequality, corruption and oppression, variations on the broader themes of populism and anti-globalization.

But Ostwald said there was a worry for financial markets who have surfed rising debt piles for years thanks to central bank money printing and bond buying.

"At some point the smothering impact of QE [quantitative easing] will run its course," Ostwald said.

"And as many of the zombie companies then go to the wall, so governments will face rising unemployment and desperately need to borrow money to prop up their economies — particularly as social unrest rises, as we are witnessing."