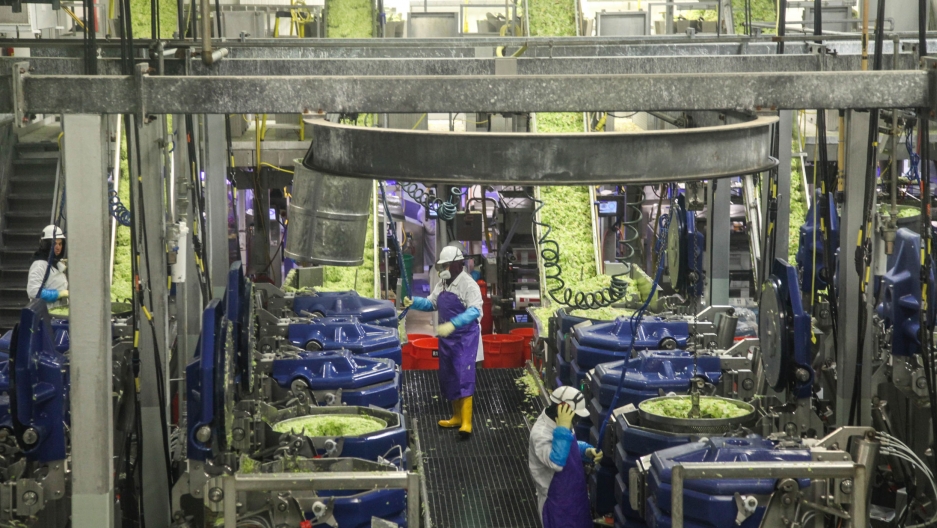 Workers wash and dry chopped lettuce at a Taylor Farms processing plant in Salinas, California on Sept. 10, 2019. In recent years, the company has started incorporating automation in its facility.

Inside Taylor Farms’ massive, 120,000-square-foot warehouse in Salinas, California, millions of pounds of lettuce, cabbage and spinach are processed each day. It’s loud, and the temperature is kept at 35 degrees, so workers wear earmuffs and multiple layers of clothing.

Vegetables from nearby fields are sent here to get chopped, washed, dried and packaged. When they’re ready for packing, a yellow robotic arm called a Quik Pick & Pack uses suction to pick up a 5-lb bag of greens and carefully place it in a box with the help of cameras and sensors. This job used to be done by humans.

In another room, nine large robotic arms stack boxes into pallets, which are then shipped off to restaurants, schools and commissaries. Just two years ago, people did the stacking. But now, human workers are monitoring the robots. 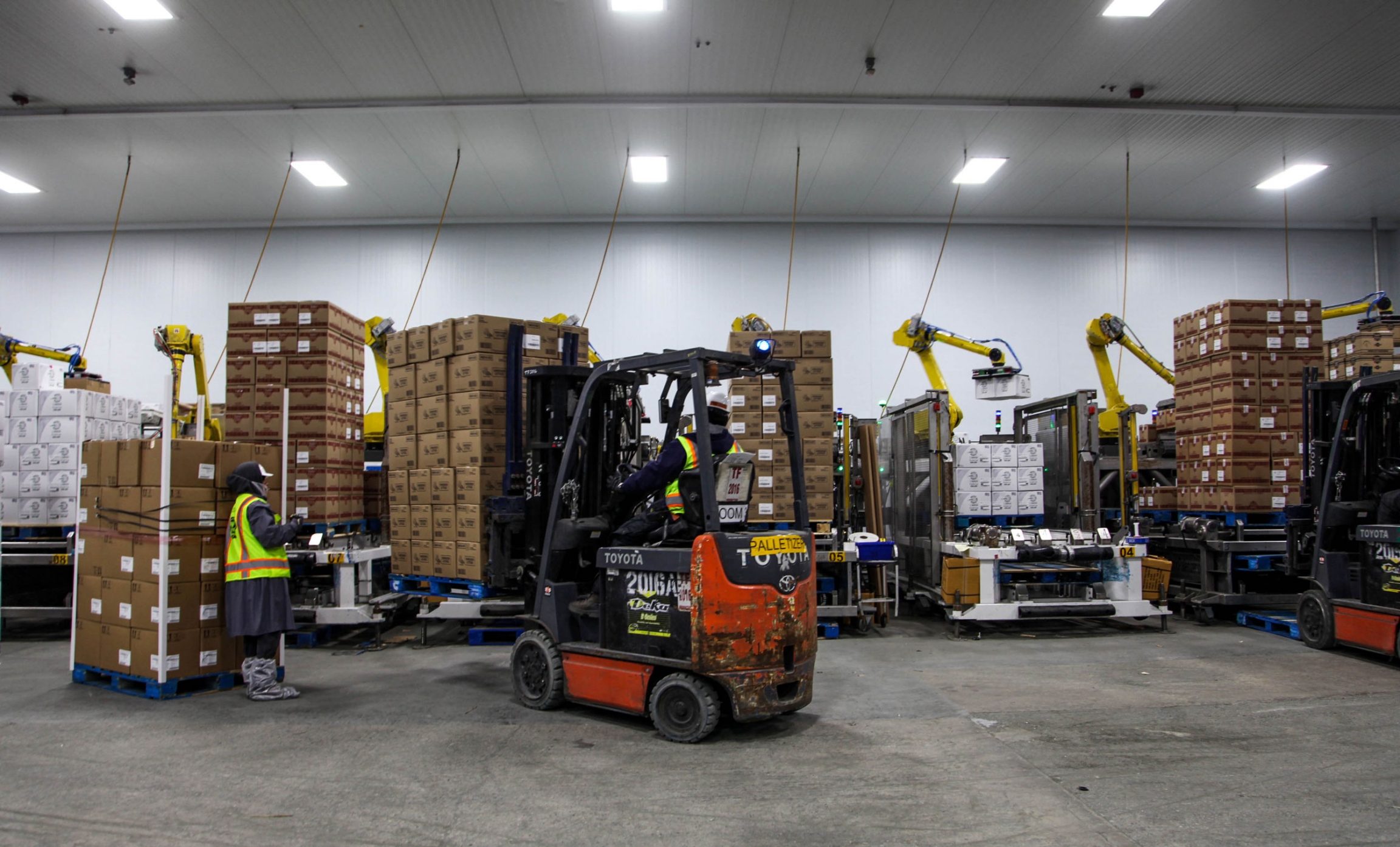 Robots stack 20-pound boxes into pallets at Taylor Farms on Sept. 10, 2019. This task used to be done by humans, but today, human workers oversee the robots.

Ana Gutierrez, an immigrant from Guadalajara, Mexico, has worked for Taylor Farms for 23 years. She has seen big changes in the agriculture industry since she started working in the fields as a teenager in 1984. Back then, she harvested vegetables by hand.

Today, American agriculture businesses are turning to automation — using computerized machines to take on tasks in production that used to be done by humans — as a way to alleviate a nationwide farmworker shortage. And immigrants like Gutierrez are getting education and training to ensure they won’t be left behind.

Gutierrez remembers when she first saw what the robots can do.

“I thought that it was something good because I thought it would make work easier,” she said.

The work has gotten easier, to an extent: Now, machines do most of the heavy lifting. Gutierrez welcomes the changes and signed up for training to learn how to run the robots. But she said other workers are concerned automation will eliminate the need for their jobs.

“I see that many people are worried that this is the future,” she said. 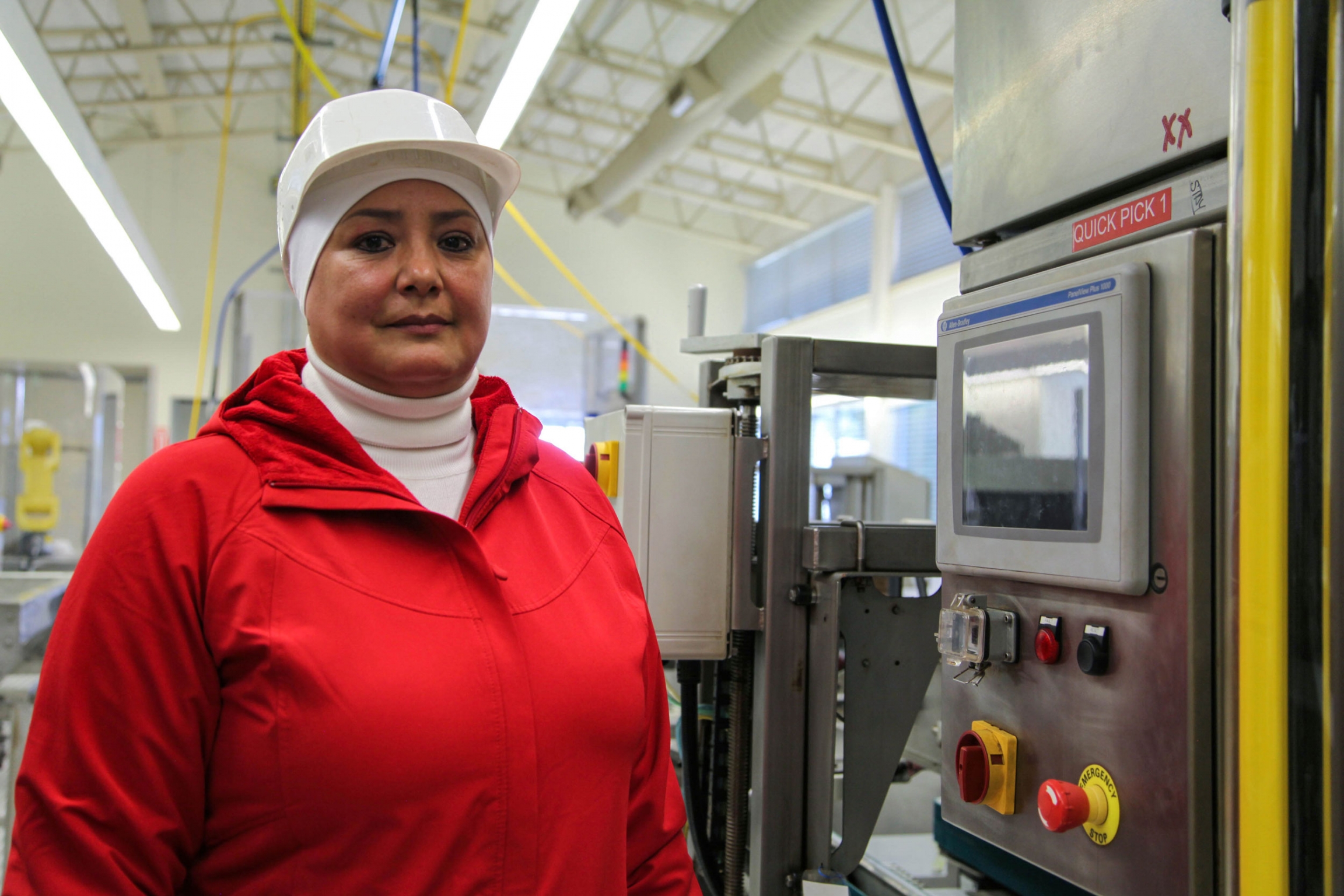 Ana Gutierrez is a machine operator at Taylor Farms in Salinas, California. She being trained in automation.

As many as 800,000 farmworkers are employed in California, according to some estimates. Automation is changing the way they work. Job security for this largely immigrant workforce hinges on people's ability to change with technology and become a new type of worker, one who is more technically skilled. One survey from the US Department of Agriculture found that 90% of crop workers in California are foreign-born. Many have not completed education beyond high school.

“The machines, they don't run themselves,” said Marcus Shebl, vice president of operations at Taylor Farms. “We don't want [employees] to feel in any way threatened [by the new technology]. We want to bring them along for the ride.”

That means major US farm businesses, including Taylor Farms, are investing in preparing their workers.

A solution to a worker shortage — or a scourge?

The turn to automation in the agriculture industry has been spurred, in part, by worker shortages. A recent survey of California farmworkers found that 56% of businesses reported difficulty recruiting workers to harvest and process their crops. Existing farmworkers are getting older, and there isn’t a younger generation in the US willing to replace them. Meanwhile, the flow of immigrants from Mexico, historically a major source of farm labor, is decreasing.

To alleviate the shortage, companies have increased wages. But the work both in the field and inside plants is not attractive: It’s tedious, difficult and often seasonal. And while more agriculture businesses are using a visa program that allows them to bring in temporary overseas workers, it’s not enough. The Trump administration’s restrictions on immigration are compounding the problem, according to industry experts. 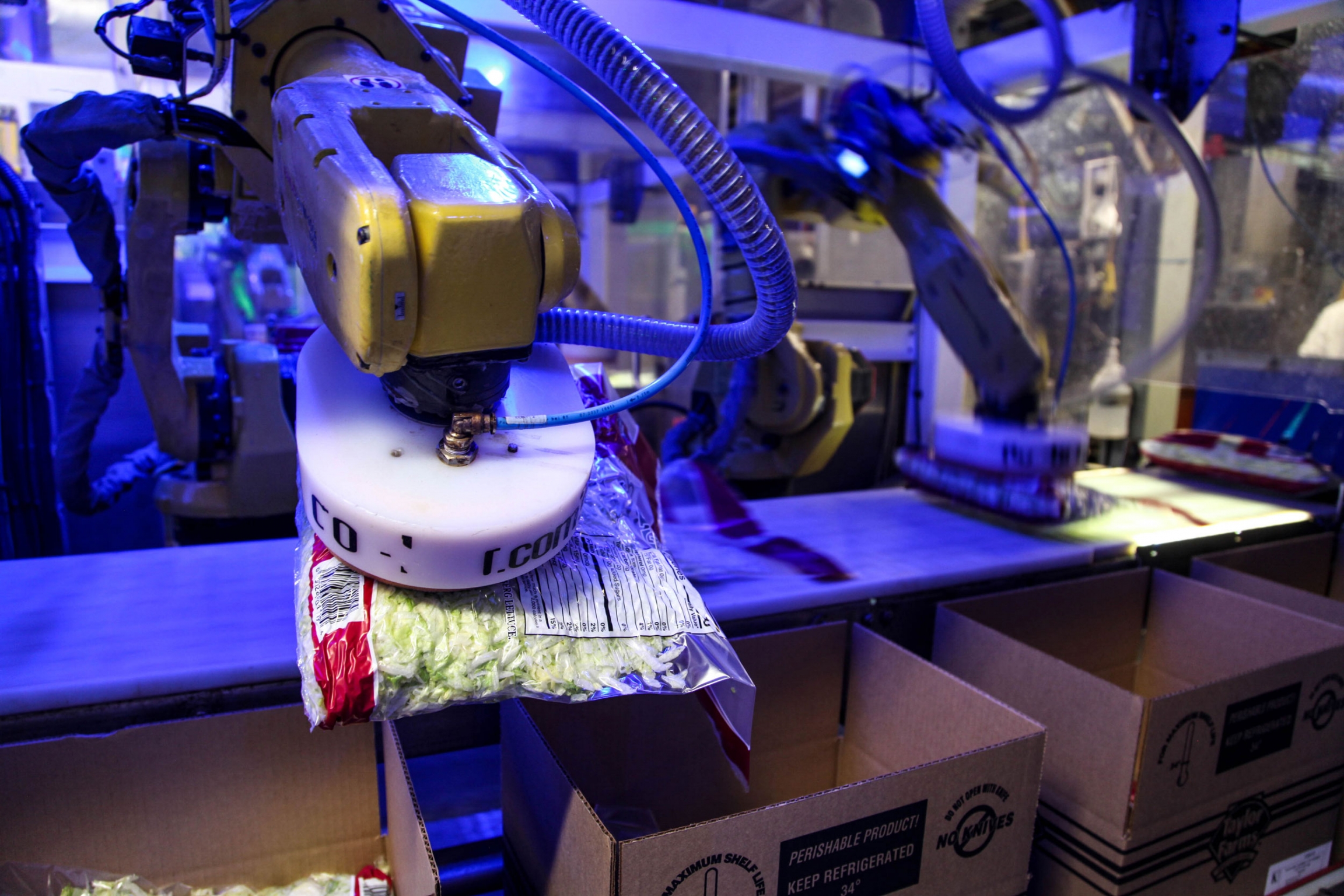 That’s where machines and robots come in, said Christopher Valadez, president of the Grower-Shipper Association of Central California.

“Automation may be another tool that will help you as the employer get some handle onto these tasks that must be performed in a way where you're not as dependent on labor to perform each and every job,” Valadez said.

But there are concerns that automation will displace workers. Crescencio Diaz, president of Teamsters Local 890, a union that represents workers in the Salinas Valley, including at Taylor Farms, said he understands why companies are depending more on technology: It’s harder to recruit workers under the Trump administration’s anti-immigrant policies, and companies have to stay competitive in a world where consumers demand cheaper goods.

But he is skeptical that automation will create enough new jobs for everyone.

“They will eliminate hundreds, thousands of jobs.”

“There's going to be a job for two or three mechanics, five or six technicians, but that's about it,” he said. “I mean, they will eliminate hundreds, thousands of jobs.”

Shebl said no Taylor Farms employees have lost their jobs because of automation. Instead, he said, jobs are changing.

Related: Automation could have a disproportionate effect on women's jobs

Agriculture researchers and industry experts say education is one way to ensure workers are not left behind. Some companies are providing in-house training and development, while colleges and universities are creating programs to help students of all experience levels.

“Automation is happening about four times as fast as we can keep up within education,” said Clint Cowden, dean of career technical education and workforce development at Hartnell College, a community college located four miles from the Taylor Farms processing plant.

Cowden said the college educates two primary groups of people. There’s the younger generation that is being introduced to computer and plant science for the first time. Then there are programs for experienced farmworkers, who are learning electric theory and basic hydraulics.

“So when the plant changes, we don't have to do a complete retooling of the employee with a complete retraining — but only small amounts, to keep them moving forward,” Cowden said.

Last year, Taylor Farms created its own training facility next door to its processing plant. The idea is for longtime workers to gain new skills — and become operators and technicians. 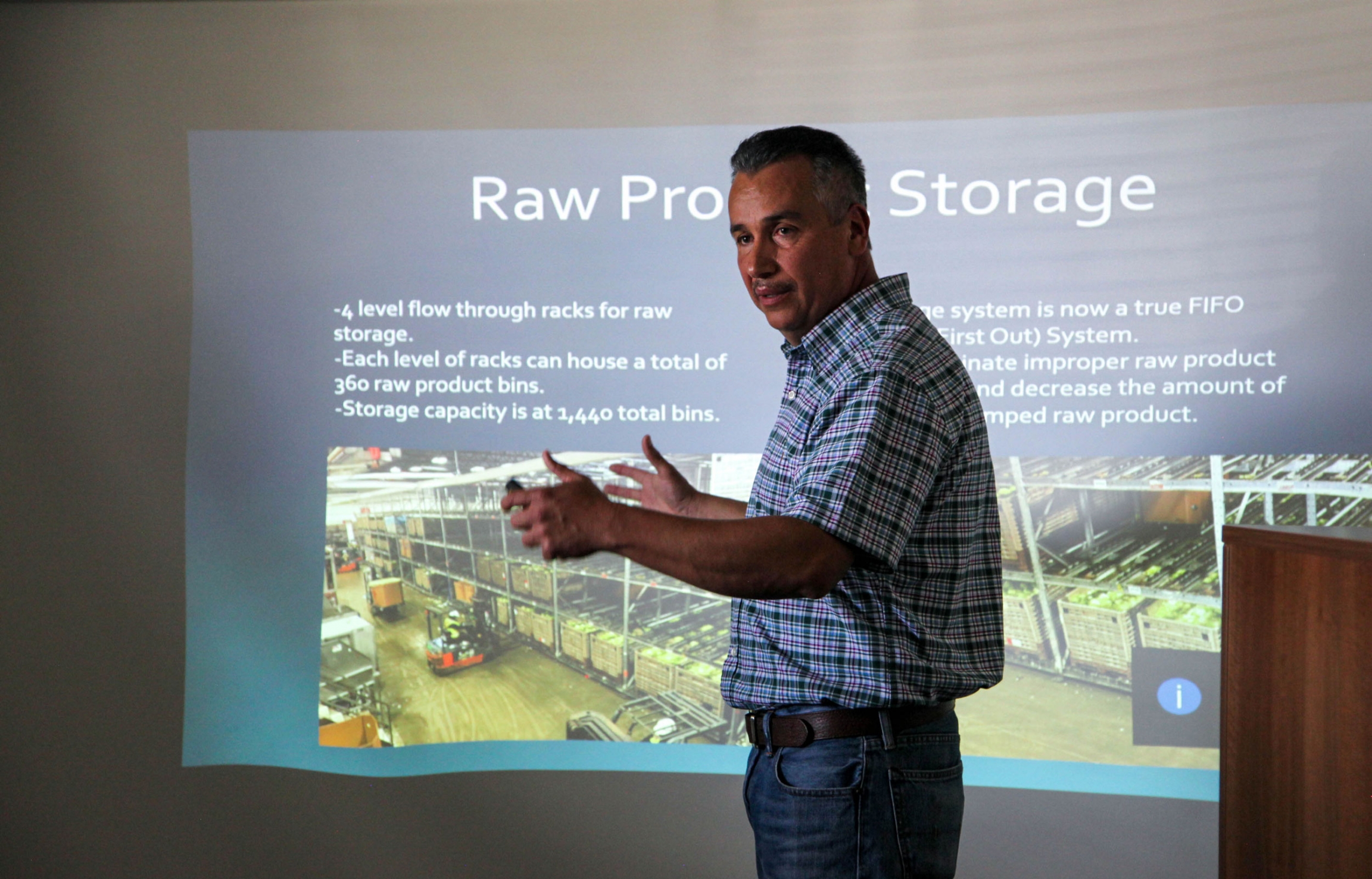 Matias Ramirez, director of facilities and automation at Taylor Farms, gives a presentation on Sept. 10, 2019, about the new technology the company is putting in place at its processing facility.

Matias Ramírez, director of facilities and automation at Taylor Farms, recently conducted a training on automation. About 25 workers sat behind long desks while listening to him go through a powerpoint in Spanish. Afterward, these employees took a close look at a Quik Pick & Pack, the machine that puts packaged vegetables into boxes.

“In the past you rode a bike. Now you drive a car, you better [know how to] check your air pressure, your oil levels, maintain the equipment,” Ramírez told them. “As we've been through this technology change in our business, you need a lot more tech-savvy people. Or someone that knows the [production] line has been that's been there for a long time that could adapt to a more tech-savvy piece of equipment.”

Gutierrez wants to be one of those workers who can adapt. Though she never went to college, she said she likes to learn and wants to keep training.

“It wasn’t difficult learning about the new robots,” she said. “Because I’ve seen how they work, and I can learn by watching.”

At age 50, Gutierrez is now an operator, manning the Quik Pick & Pack robot and another machine that puts the vegetables in a bag. She makes about $22 per hour.

The pay isn’t a big jump, considering she’s been at the company for more than two decades. She started at Taylor Farms making $11 an hour. But her job today is less physically demanding, and she said she sees herself working for the company for a long time.

Gutierrez said she wants to keep looking ahead.

“I want to learn, I want to move forward, I don’t want to get stuck,” she said. “If you set your mind on something, you can achieve them, and transform for yourself and your work.”