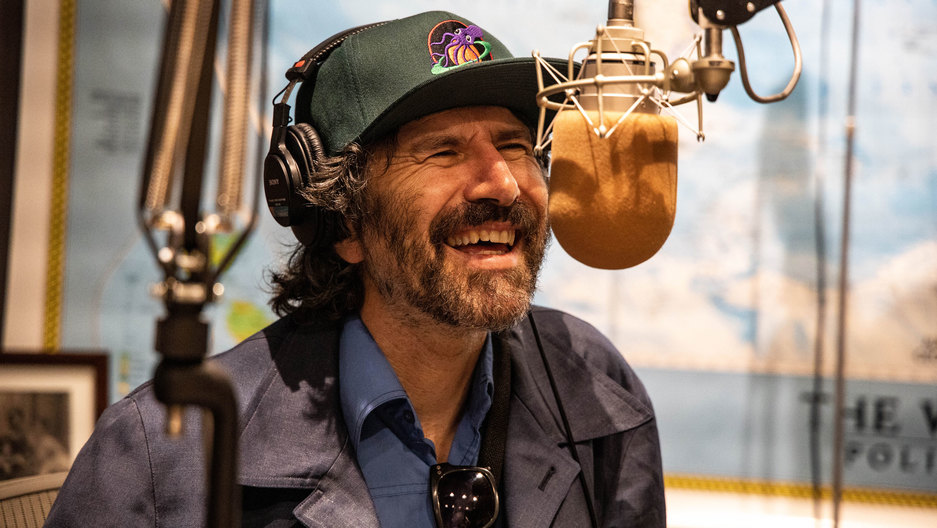 Gruff Rhys of the UK's Super Furry Animals speaks with The World Sept. 19, 2019.

The album is a collaboration with Muzi, a South African electronic artist and producer who worked with Rhys to put a new spin on his beats.

Rhys spoke with The World's Carol Hills about the album, and the political issues it references.

Carol Hills: Where did the title come from? The album's called Pang! with an exclamation point. I think of "pang" as a kind of tortuous emotion.

Gruff Rhys: I think generally the album's quite uplifting and it's a hopeful record, but even on good days, especially these days, you know, you're having a good day and then you listen to the news or something and get a pang of reality, you know.

Yeah, there's a lot of panging going on these days. I don't speak Welsh, but you do address political issues in your songs: distrust of authority, fake news, globalization. What about your climate change song, "Eli Haul," in Welsh? What are you saying in that song?

That song's a really abstract song. It's not a protest song, as such, but I was trying to evoke a feeling of melting. I wanted to write lyrics and music that sounded like it was melting, so it's quite abstract. I think the climate crisis is on everybody's mind, especially as a touring musician. ... Also there's a global political crisis, especially in the short term, in particular, and in Wales and in the UK.

In 2016 you released the song, "I love EU." It was your song to show support for the Remain campaign in the UK. Now, more than two years later, since the Brexit vote, I'm just wondering what your thoughts are on the whole debate. What has surprised you the most?

Yeah, that song came about during the time the Leave campaign was heavily driven by xenophobic marketing campaign. And the EU, you know, it's not a bed of roses. It's — from a socialist perspective — there's a democratic deficit for sure and the EU institutions, it's not perfect. But the Brexit being offered is driven by extreme capitalist ideology.

What's your view now, though? This far along, have you changed the way you think or sing about — it sounds funny — issues like Brexit? What's your message now after all this time of hand-wringing?

Well, I'm not a particularly effective protest singer. You know, I thought nobody, almost, was engaging with the referendum. I saw it as a frightening prospect. And I wanted to engage with it.

Do you see yourself as just a musician who wants to express your own thoughts and ideas musically, or do you feel like music for you, at this point, is a way to convey the really weighty issues that we're all facing around the world?

Primarily it's a musical expression and, you know, music reaches beyond language. That's the power of it. And it's possible to evoke, you know, to create feelings. But then within that, the lyrics are reflections of my life. It's a diary of the time I'm living in.

Your new album is a global sounding album and on the tune "Taranau Mai," I hear what sounds like tablas and a didgeridoo.

Yeah, you're absolutely right. I didn't know how many people would pick up on that. We were in the studio mixing me and Muzi mentioned that the song was something really exotic to him, that the Welsh language sounded exotic, and we decided to put every exotic sound we could imagine in onto one track.