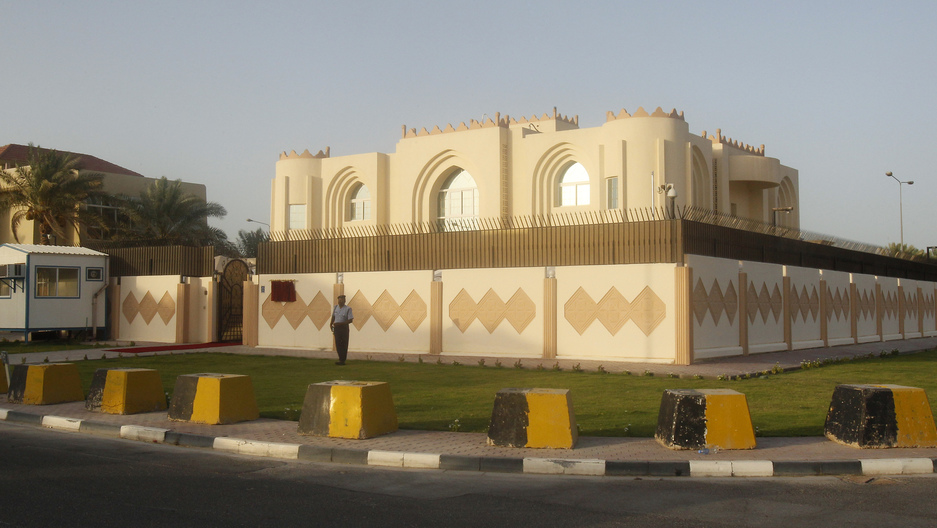 A general view of the Taliban Afghanistan Political Office in Doha, Qatar, June 18, 2013.

On a summer day in 2013, a group of Taliban men stood around a flagpole in Doha, the capital of Qatar. They raised the Taliban’s black and white flag. Then, they lined up to pray.

This was a big moment — a moment that changed how the West negotiated with the Taliban. It was the first time the Taliban had a real address where negotiators could find them.

The US and others had tried several times in the past to sit down with the group, said Kristian Coates Ulrichsen, a fellow for the Middle East at Rice University's Baker Institute for Public Policy.

"In 2008-2009, there had been attempts by NATO and US officials to establish contacts with Taliban representatives in Afghanistan," Ulrichsen said.

Related: 'Peace is the highest desire,' says Afghan ambassador to US

Later, in 2010, the British and Americans reportedly spent a year cultivating contacts that could lead them to high ranking members of the Taliban. With the help of those contacts, they ended up identifying a man called Mullah Akhtar Muhammad Mansour, who they thought was a top Taliban commander.

They paid him large sums of money to keep him interested in the negotiations. Afghan officials met with Mansour four times at the presidential palace in Kabul.

But shortly after those meetings, they discovered that Mansour was no high-ranking Taliban leader. It turned out he was a shopkeeper from Pakistan. He took the money. And he vanished.

"Those contacts had effectively fooled the US, NATO officials into believing they were representatives of the Taliban," Ulrichsen said. "They had walked away with large amounts of money."

By 2013, the Americans realized that if they were going to negotiate with the Taliban, they needed to know who they were talking to.

"Many times they were deceived," said Dawood Azami, an editor for the BBC in London who had previously been the bureau chief in Kabul. "They didn’t know who was the Taliban and who wasn’t the real Taliban. And that’s why they agreed that the Taliban should have an address where they can find them and meet them."

Azami, who has reported on the Taliban presence in Doha, said the US came to the conclusion that the group needed a political office — an address where they could be found. And it had to be outside of Afghanistan, in neutral territory.

"Many countries were interested to host the Taliban or Taliban’s political office," Azami said. "Turkey, United Arab Emirates, Qatar and Saudi Arabia were keen to host a group of Taliban."

Why so keen? Azami said i's because it’s a political investment. Helping Americans negotiate an end to one of their longest wars could boost a country’s image, he explained, both in the region and in the US.

But it wasn’t a given for any of the countries.

"Turkey was rejected because Turkey is a member of NATO. And UAE and Saudi Arabia were considered too close to the Americans," Azami said.

Qatar, was neutral enough for both sides. So the Qatari government offered the Taliban a villa on the outskirts of Doha with tan walls and large, arched windows.

Azami was in Doha in 2013, covering the opening of the Taliban's political office for the BBC.

"It was a big moment," he said. "They told me that they hadn’t seen this venue before, and they were brought and they were told ‘this is your new office.’"

From the moment it opened in 2013, the Taliban political office was controversial. The Afghan government was outraged after the group raised its flag there. Azami said officials in Kabul feared that the Taliban was forming a government in exile.

But the office survived the controversy and became a place where outside negotiators can find the real Taliban.

"The members of the political commission and the negotiators have been living in Qatar with their families for the past many years," Azami said.

Joining them in the latest round of talks this year in Doha, was Taliban deputy leader, Mullah Abdul Ghani Baradar. Baradar had been in a prison in Pakistan. "He was arrested by the Pakistanis for starting secretive negotiations with the then-Afghan President Hamid Karzai," said Javid Ahmad, a nonresident fellow at the Atlantic Council and an adviser to the Trump administration on Afghanistan.

Baradar's presence carries weight in US-Taliban negotiations: the Americans wanted him at the table to make sure that any deal would stick, so they secured his release from Pakistan.

But the most recent talks collapsed when US President Donald Trump called them off earlier this month. Months of negotiations aimed at securing an agreement to pull US troops out after nearly 20 years of war ended abruptly just days before the 18th anniversary of 9/11.

This leaves the complicated question of what is going to happen to Baradar. Will the deputy head of the Taliban remain a free man in Doha?

"He is at the moment in Qatar, as far as I know, and he will remain there for the foreseeable future," Ahmad said.

But Ahmad said the talks are not necessarily dead.

And if the talks do resume, the Americans know where to find the Taliban.