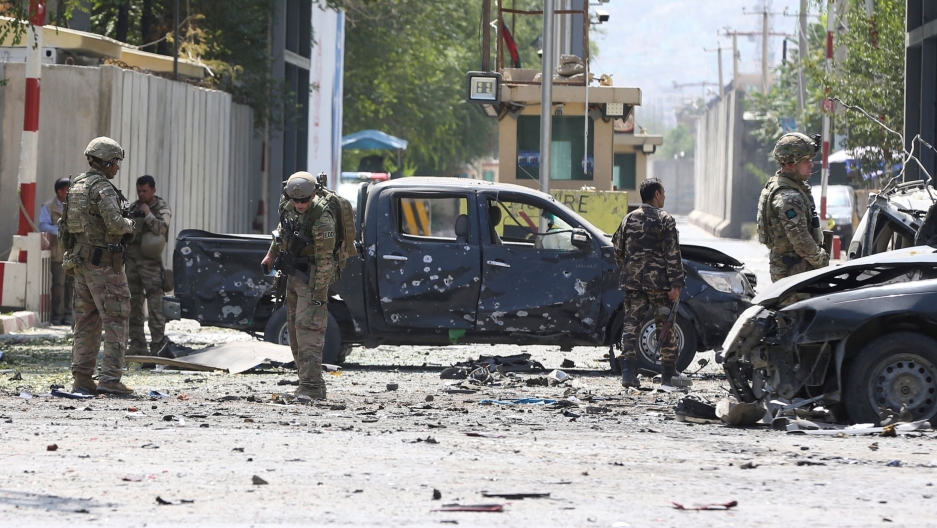 Foreign troops with NATO-led Resolute Support Mission investigate at the site of a suicide attack in Kabul, Afghanistan, on Sept. 5, 2019.

US President Donald Trump said on Monday that talks with Afghanistan's Taliban leaders are off and that he was still considering a US troop drawdown in the country.

"They're dead. They're dead. As far as I'm concerned, they're dead," Trump said of the talks, speaking with reporters as he left the White House for North Carolina.

Months of US negotiations with Taliban militants, who control large parts of Afghanistan, ended on Saturday when Trump abruptly announced he was canceling secret talks at Camp David with the Taliban and the country's president, Ashraf Ghani. The talks were aimed at securing an agreement to pull US troops out after nearly 20 years of war.

A draft accord agreed last week would have seen about 5,000 American troops withdrawn over coming months in exchange for guarantees that Afghanistan would not be used as a base for militant attacks on the United States or its allies.

Despite the Afghan government's wariness of negotiating with the Taliban, Trump had hoped having both parties at the presidential compound in Maryland could produce an agreement.

Trump said he knew the gathering could not take place after the Taliban claimed responsibility for a suicide attack last week that killed an American soldier in the capital Kabul.

The end of the talks has fueled fears of a further increase in violence across Afghanistan.

Afghan President Ghani, who was sidelined from months of negotiations between US officials and Taliban representatives, had been deeply suspicious of the talks, which sought to agree to a timetable for an American withdrawal.

On Monday, Ghani made a renewed call for peace but insisted the Taliban must observe a ceasefire, as he sought to regain a hold on the peace process.

The World's Marco Werman spoke with Monica Duffy Toft, director of the Center for Strategic Studies at the Fletcher School of Law and Diplomacy at Tufts University, about the peace negotiations.

Marco Werman: You've studied more than 100 conflicts. Is there any precedent for what the US has been doing in talking with the Taliban?

Yes, there's precedent for it. You're just talking to the opposition, you're talking to the former combatants that you're fighting. Of course, if you want to get a negotiated settlement, you have to deal with them and have a dialogue.

I think what was unprecedented was the lack of agreement within the administration and, in particular, at the highest levels and how it was going to be handled and then how, when pulling the plug on it, how it was going to be announced. So the fact of the negotiations, that's good, actually, that we're thinking about bringing all of the parties perhaps to the table — at this point, it was just the Taliban — and then trying to seek a negotiation, a political settlement, to this war because there's not going to be a military settlement. We've been trying that for 18 years.

But I think what was odd about this was the manner in which the plug was pulled and then the announcement and the disagreement, ... and actually many in the administration not being aware that the chief executive, who is going to bring the party there, to finally sign and seal the deal just made an announcement that, "No, it's not going to happen, we're done."

"... what is unprecedented to some extent, is the degree to which the disagreements came out within our own administration over how to handle it."

That disagreement within the US national security apparatus, that is the curious part. Can you think of any parallels to that?

It happens sometimes. A parallel, maybe when we were negotiating the Dayton Accords in former Yugoslavia, there was a disagreement about whether to bring the Serbs — and that's both the Bosnian Serbs to the table, but then also Serbia proper of Yugoslavia-Belgrade to the table. So those disagreements often happen, about whether or not you deal with the other side and with which parts of the other side, so that does happen. I think what is surprising is that the laundry is sort of being aired about those disagreements. Usually, you have a bit more professionalism because it tends to undermine your position because then the parties with whom you're negotiating think, "Oh gosh if we could only get x to the table from the American administration, maybe we can get a better deal." And so again, what is unprecedented to some extent, is the degree to which the disagreements came out within our own administration over how to handle it.

Afghans have expressed concern that the US is abandoning them. What is the typical result when a strong intervening power walks away from a conflict?

Well, it is really striking because the people are concerned that we're going to have an outbreak of civil war again in Afghanistan. This is what happened in '79 and then we had another decade with the Soviets going in '79 and then pulling out in '89. And so the Afghans themselves, in particular the government, is very concerned that they're going to have an outbreak of violence. So you do see all across the media, "Gird yourself for more violence." So you're likely to have that, but the truth is is that we're having it anyway and the US presence doesn't seem to be ameliorating it.

The Taliban now controls as much territory as it controlled in 2001. So yes, there's probably going to be an outbreak of violence or an intensification of the violence as the Taliban and others and the Afghan government jockey for position again.

And the Afghan government indeed, Ghani, the leader of Afghanistan, he does feel as if the United States is sort of just going to cut a deal with the Taliban and leave him holding the bag. It's a weak government, we know how corrupt it is, the security forces that we've been trying to build for the last two decades are not functioning, and the Taliban have shown themselves to be extraordinarily effective at keeping it together and being able to prosecute the war even at the lower levels, but to create real damage in the country and to further undermine the government. So the big concern, of course, is that we're going to have a reversion back to a full-scale civil war — and we just might.

But I have to say, the levels of violence haven't been as much reduced as you would think, given the presence of the United States there.

But you know even with the United States there for two decades, Afghanistan is still on the bottom when it comes to the corruption index and it's still on the bottom when it comes to human rights, the protection of human rights. So then you have to ask yourself, at what point should the United States work with regional partners, Pakistan in particular, to say "OK, how can we pull back from here without doing as little damage as possible as we pull out and pull back?"

Note: Afghanistan ranks No. 172 out of 180 on Transparency International's 2018 Corruption Index.

When you have a civil war with a strong foreign intervention force like the US in Afghanistan, typically how do these conflicts end?

They actually don't end. What you get is years, if not decades, of continued, very low activity. So I think what you'll likely see is each side arming themselves again and trying to defeat [the other]. I think the Taliban's made it very clear — it calls the Afghan government "the stooge government." It sees it as a proxy for the United States. And so I do think you're going to see them trying to overthrow the government. And then I think you'll go into low-scale, low-intensity conflict for a very long time.

"They actually don't end. What you get is decades or years and years if not decades of continued, very low activity."

That's a really depressing scenario. Let's just say what we've got facing us right now is a draft US deal with the Taliban. It's been kind of walked away from, it did not even include a ceasefire. Where would you start again? We know the talks that include the Afghan government — what is needed for peace right now?

I think everybody needs to step back and take a deep breath. My understanding of the deal that was negotiated was about taking out US troops over a period of time, so the first 5,000 within 135 days and then the remainder of troops over time...

But then I think what they're going to have to do is diplomacy with both sides to try to bring them together. But the current administration, as you know, is very impatient. I mean these things take years and years to negotiate. And what you have to do is figure out a way to get both sides recognizing each other, which is very difficult, and then recognizing legitimacy to each other and having a right to rule within that government. That's how you get peace. But until they're willing to recognize each other and to recognize that each perhaps has a legitimate right to rule on that government, you're going to see them constantly going to combat, going to war, to defeat the other side.

And the Trump White House and patience? What's that about? Is that about 2020?

I think it is. President Trump said he was going to solve this problem, that he was going to bring peace to Afghanistan, and he does not appreciate — and I have to say generally speaking — how difficult diplomacy is, that it's not a business deal. There's not actually a price to this, that people can be bought off with something, that you actually have to work really hard to understand the fundamental issues and work with the different parties and shuttle back and forth. I actually was impressed. There's [been] nine different meetings in Doha. Zalmay Khalilzad was the one negotiating this and I guess what's really tragic about this is, they were actually doing the right thing and taking a longer-term negotiating strategy, willing to work with the Taliban, finally recognizing that yes, this is an Indigenous — and in the eyes of many Afghans — legitimate, political group that should probably have a say at the table. And I guess what's so tragic is all of that work seems to have been tossed out because the president just decided that he was going to tweet and say, "Nope, we're not going to go to Camp David." And on top of that, the way in which they were going to bring people to Camp David, not being fully honest and open about how that was going to be done, so then the parties, even if they had gotten there, they may not have been willing to negotiate.