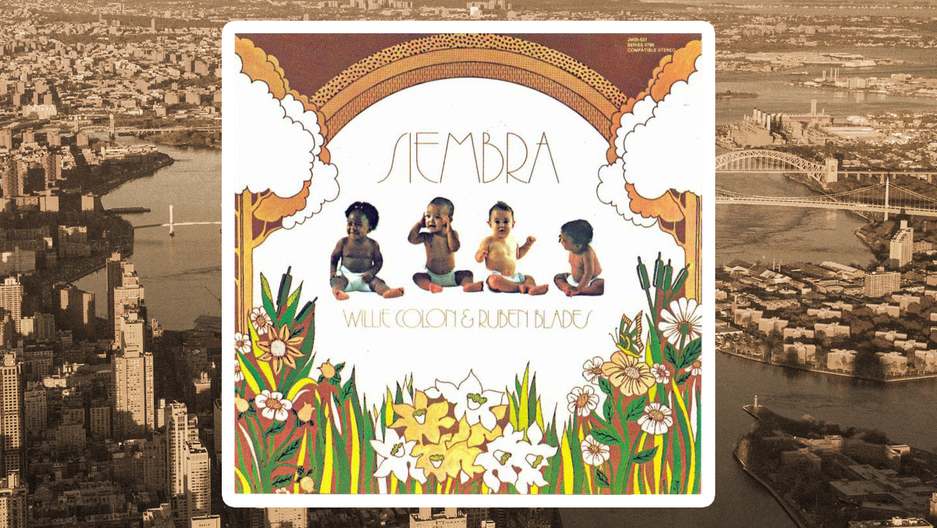 The best-selling salsa album “Siembra” from 1978; a view of the Bronx, just north of Manhattan.

Studio 360’s American Icon series has explored dozens of influential works of art and entertainment that have shaped who we are as Americans. Now we turn to our hometown of New York for a new batch of Icons stories about works of art that were born in the city and impacted the lives of people everywhere.

This time: the album "Siembra," which many salsa fanatics thought was doomed when it came out on Fania Records, in 1978. The record’s songs were thought to be too long, bashed American consumerism and called for Latinos to push for social change — all unconventional choices for a salsa album.

Ruben Blades, a singer-songwriter from Panama who composed the lyrics and music for all but one song on "Siembra," remembers being called to the office of Jerry Masucci, president of Fania Records, with the album’s producer Willie Colón. Colón was a big salsa star at the time with more than a dozen records.

Blades says they played the still unreleased album in front of three top New York salsa DJs. “The three of them said that this record should not be put out, because it would be the commercial death of Willie Colón,” Blades says.

But "Siembra" became the first salsa record to sell more than one million copies. It took a rhythm that was born in New York Hispanic neighborhoods of The Bronx and East Harlem to the world stage.

"Siembra" was so different that, to test the waters, Fania Records started promoting it abroad first, in places like Venezuela, Mexico and Puerto Rico. Latin America was going through political turmoil then and many countries were under military dictatorships. The political songs of "Siembra" spoke to them and they liked the fact that Blades was talking to the whole region. “Nobody talked about Latin America. Things were about 'el barrio,' the neighborhood, maybe Puerto Rico, but you weren't addressing Latin America as a whole,” Blades says.

"Siembra" included songs like “Pedro Navaja,” which was inspired by a British opera from the 18th century about a beggar, and also by street gangs. It’s still one of the most famous salsa songs ever recorded. Cultural critic Carolina Gonzalez says the philosophical ideas of that song and of the album in general served as a blueprint that inspired generations of musicians. “Anybody like Cafe Tacuba, Calle 13, Julieta Venegas — they're all following this playbook,” she says.

You can listen to the album here:

And if you are curious about the song "Pedro Navaja," you can find a translation here.

New York Icons is made possible by funding from the Booth Ferris Foundation.