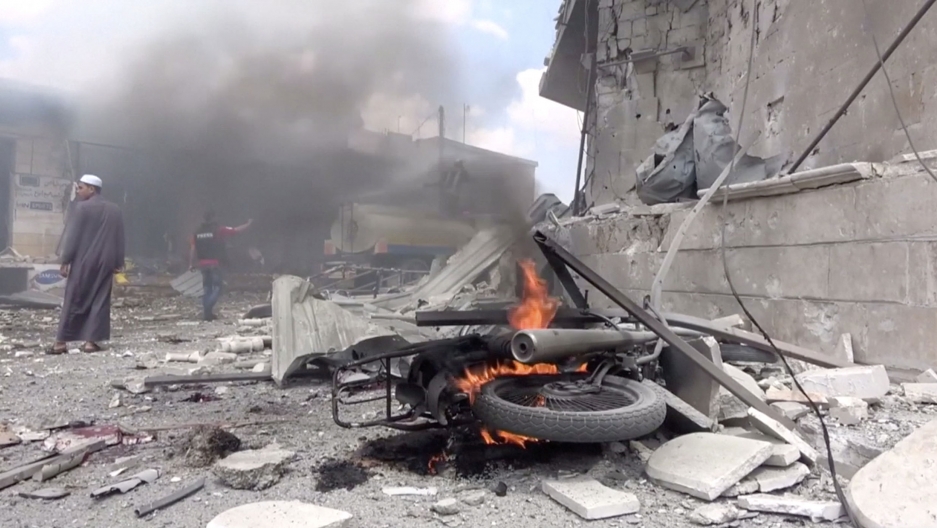 A motorbike burns after an airstrike in this screengrab taken from a social media video said to be taken in Idlib, Syria, on July 16, 2019.

Ten of thousands of people have fled to Syria's border with Turkey in the last few days as a Syrian army advance pushed further into the opposition's last major stronghold, residents, rights groups and opposition sources said on Wednesday.

They left Maarat al-Numan, a city in Idlib province that has been a sanctuary for families fleeing former rebel areas, as a Russian-led push has come close to capturing the strategic town of Khan Sheikhoun further south.

"The flow of cars and vehicles leaving is not stopping," said Abdullah Younis from the city. Rescuers there said around 60,000 people had fled in the last four days alone.

On Tuesday, Russian and Syrian jets intensified their bombing of scattered villages and towns around Maarat al-Numan, with the al-Rahma hospital in the area struck, residents said.

State media on Tuesday said government forces were battling militants but had extended their advance and seized a highway running through the town.

After months of stalemate, Russia has increased the intensity of raids in the last 10 days, transforming the situation on the ground. Hundreds of civilians have been killed and at least 400,000 people displaced, medics, NGOs and the United Nations say.

The Syrian Network for Human Rights said 196 children were among the 843 civilians killed in the Russian and Syrian raids since the campaign began last April.

Moscow and Damascus, who deny indiscriminate bombing of civilians areas or targeting hospitals, say they are fighting jihadist militants drawn from across the world.

"On a daily basis, there is airstrikes, a ground offensive that is taking place in residential areas," says Panos Moumtzis, the United Nations humanitarian coordinator for the Syria crisis. "We have had more than 100 incidents now of health facilities, schools, water points, markets, residential areas that have received a direct airstrike and a hit. There's hundreds of people who have been killed, thousands injured and about half a million displacements that have taken place in the last 100 days or more."

Moumtzis says most residents — there are about 3 million civilians living in the area — are trying to flee with their families.

"Protection of civilians is our major concern, to make sure that in the conduct of hostilities, women, children, families are taken into account and every effort is made to make sure that they are safe, rather than seeing them becoming victims as we have seen so far," he told The World's Marco Werman.

Marco Werman: I know the UN has supplied information about medical facilities to the government in Syria in the hopes of protecting civilians from attack. Has that helped at all?

Panos Moumtzis: We provide coordinates of health facilities, of education facilities, of humanitarian workers' warehouses to make sure that they are protected, they are respected. Sadly we have had multiple incidents on health facilities which have been receiving a direct strike, a direct hit. The secretary-general has now asked for a board of inquiry to find out really what has happened. And for us, this is very serious because the United Nations funded hospitals, schools, water points; our operation must be respected. These are civilian facilities and really, every effort has to be made, and that's why we share also the coordinates and we alert everybody to make sure that they are protected and respected. It's the basic rule of war, according to the international humanitarian law and the Geneva Convention, to make sure that these facilities are respected and protected.

Our concern is really, while these hostilities are taking place, that innocent civilians are paying the price. We have seen this taking place in multiple locations and we see it one more time in Idlib as we speak. So that's why we call for everybody, first of all, to have a cessation of hostilities, to finally see a peaceful way forward and to make sure that civilians will not be affected by what is happening on the ground.

We "de-conflict" sides and provide the coordinates actually to the parties to make sure that they know that this is a health facility and really it has to be protected. This is a standard practice to do in many conflict situations — we share it with several parties to the conflict to make sure that there is no question in their contract facilities in terms of them understanding what that location and what their facilities on the place. In our discussion with humanitarian partners, including the actors who work on the ground, our decision is to continue doing that. It's a question of accountability. It's a question of prevention. And really, to keep on raising our voice so that a hospital is a respected health facility, a school is respected and does not receive any direct targets.

And are you concerned currently that you know what we've just stated, that the coordinates are actually being used to target those facilities? Are you concerned that's happening?

There is no evidence to indicate that this is actually happening. I think there have been some health facilities that have been both "de-conflicted" and others that have not been "de-conflicted." There are markets, there are essential areas that have also received a target. So there's no proof to say that because of the sharing the coordinates they received a direct attack on the ground. On the contrary, the opposite: We feel that by sharing the coordinates, we bring a tighter accountability, responsibility. Nobody can say, "We didn't know," and that's where we are even further strengthening and enhancing the "de-confliction" mechanism to really make sure that the information is accurate. It's not, for example, we no longer provide one point for the hospital but we provide four, taking the walled periphery. And of course taking every measure to make sure that everybody knows about it and that, as the United Nations, we raise our voice again and again to make sure that these sites are respected and protected.

"We have a plan that goes up to 900,000 people. Should we see more than that, there is no way that humanitarian actors or anybody would be able to plan for millions of people."

If Syria routes the rebels and extremists and conquers the whole of Idlib province what will happen to the three million civilians? Where will they go?

Well, that's a big concern — what is the "people-plan," basically with Idlib. Clearly, at the moment, there is a massive movement further north, within the Idlib [province], the vast majority stayed within the nongovernment control area and moved towards the Turkish border. So this could be catastrophic because Turkey already is the largest refugee-hosting country but also there is a threat for destabilizing beyond Turkey, looking at Europe and looking at a massive movement on the ground.

So that's where I think the cessation of hostilities, a peaceful solution, a negotiated way out is really crucial and also finding solutions for where these people would go, because, at the moment, what we see is a massive displacement, which is continuing by the hour and that really requires an urgent political action to make sure that civilians are protected.

So what is the United Nations doing to prepare for that eventuality?

We have a plan that goes up to 900,000 people. Should we see more than that, there is no way that humanitarian actors or anybody would be able to plan for millions of people. We hope that that will not go to this catastrophic scenario because that would really be dramatic for the people and I don't think anybody can be ready to deal with three million people.

So let me rewind to the present day. What hopes are there for a new ceasefire?

At the moment, I mean our work is really on the humanitarian side and that's why we raise our voice. There are discussions on the political side. At the moment, we haven't seen any ceasefire lasting. Their last talk on Aug. 2, there was a ceasefire agreement that barely lasted three days. The ink and the paper where it was signed hadn't even dried when it all resumed again.