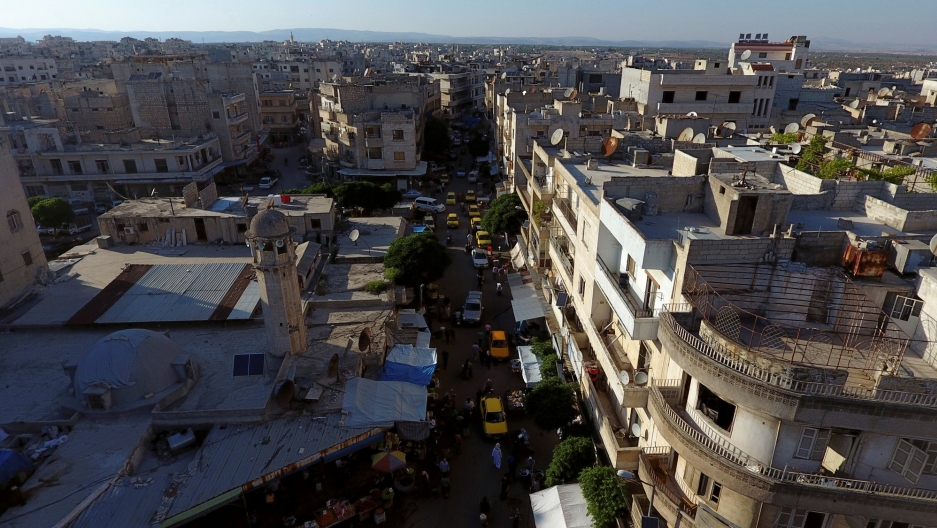 A street filled with cars in the rebel-held Idlib city, Syria, shown from above on June 8, 2017.

The Kremlin dismissed President Donald Trump's warning to Syria not to launch an offensive in the rebel-held enclave of Idlib, saying on Tuesday that the area was a "nest of terrorism."

"Just to speak out with some warnings, without taking into account the very dangerous, negative potential for the whole situation in Syria, is probably not a full, comprehensive approach," Kremlin spokesman Dmitry Peskov said.

The presence of militants in Idlib was undermining the Syrian peace process and making the region a base for attacks on Russian forces in Syria, Peskov added.

"A fairly large group of terrorists has settled there and of course this leads to a general destabilization of the situation. It undermines attempts to bring the situation onto the track of a political-diplomatic settlement," he said.

A source has told Reuters that Assad is preparing a phased offensive to regain Idlib.

Trump on Monday warned Syrian President Bashar al-Assad and his allies Iran and Russia not to "recklessly attack" the northwestern Syrian province, saying hundreds of thousands of people could be killed.

"The Russians and Iranians would be making a grave humanitarian mistake to take part in this potential human tragedy. Hundreds of thousands of people could be killed. Don’t let that happen!" Trump wrote in a tweet.

President Bashar al-Assad of Syria must not recklessly attack Idlib Province. The Russians and Iranians would be making a grave humanitarian mistake to take part in this potential human tragedy. Hundreds of thousands of people could be killed. Don’t let that happen!

The northern province and surrounding areas are the last major enclave held by insurgents fighting Assad, who has been backed by both Russian and Iranian forces in Syria's seven-year-old civil war. They are home to some three million civilians.

Trump has sought better relations with Russia since taking office in 2017 but the United States has been unable to rein in Moscow's military and diplomatic support for Assad.

US Secretary of State Mike Pompeo on Friday said Washington views any government assault on Idlib as an escalation of Syria's war, and the State Department warned that Washington would respond to any chemical attack by Damascus.

Nikki Haley, the US ambassador to the United Nations, wrote on Twitter late on Monday: "All eyes on the actions of Assad, Russia, and Iran in Idlib. #NoChemicalWeapons"

Iran called for militants to be “cleaned out” of Idlib, as it prepared for talks with Syria and Russia about confronting the last major enclave held by rebels opposed to Assad.

Turkey, which has long supported anti-Assad rebels, has cooperated with Russia and Iran on talks over Syria in recent years and has troops in the Idlib region on an observation mission.

Last week, Iran's defense minister traveled to Damascus and signed an agreement for defense cooperation between the two countries with his Syrian counterpart.