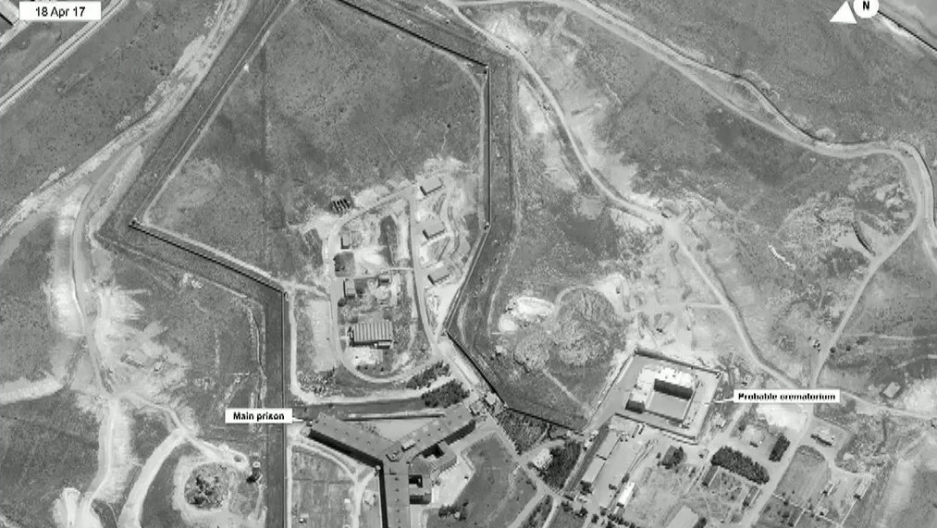 A satellite view of Sednaya prison complex near Damascus, Syria, May 15, 2017.

Department of State/DigitalGlobe/Handout via Reuters

Dr. Hala Al Ghawi was pregnant with her third child when her husband went missing.

It was September 2011, the early days of the uprising in Syria.

"I spent the last two months in my pregnancy feeling very sad that maybe my son will never see his father," Al Ghawi said.

Al Ghawi was a surgeon in Damascus before the war started. Her husband, Mohammad Abo-Hilal, was a psychiatrist. She says a few days before her husband went missing, a man called for an appointment at his clinic.

When Abo-Hilal showed up, "he saw a lot of soldiers, armed. And they took him forcibly."

Al Ghawi gave birth to her son not knowing if he would ever see his father.

Then, after more than two months of anguish, she got a call. Her husband was alive. He was in a government prison and he was going to be released.

Al Ghawi was elated. Until Abo-Hilal got home.

"He didn’t want to talk about his experience," she says, "from a medical and psychological point of view I didn’t want to pressure him to talk. Even if I was eager to know."

It was as if her husband was a different person. He didn’t speak for two months, he didn’t even show any interest in the new baby, Al Ghawi says.

When, eventually, he did talk, his stories were grim.

"He was [beaten] routinely by the regime forces in the prison," she says, "He was put in isolated cells for more than 40 days. Alone."

He was starved and tortured psychologically, she says.

Shortly after her husband’s release, Al Ghawi and her family fled Syria. They now live in Turkey.

But their ordeal isn’t over. She says in 2013, Syrian forces arrested her brother, father-in-law and seven of her cousins.

"We don’t have any information about their situation," she explains, "even about their location, even [if] they are still alive or they are dead."

No system, no information

It isn't clear how many Syrians have been detained and are missing. The Syrian government doesn’t release figures and it doesn't allow human rights groups to visit detention centers.

Last week, Rosemary DiCarlo, Under-Secretary-General for Political and Peacebuilding Affairs at the United Nations, briefed the Security Council on the issue of detainees, abductees and missing persons in Syria.

She said more than 100,000 people have so far been detained, abducted or gone missing — largely, but not only, at the hands of the Syrian government.

She explained that due to lack of access, what's known "comes from accounts recorded and corroborated by the Independent International Commission of Inquiry on the Syrian Arab Republic, mandated by the Geneva-based Human Rights Council, as well as human rights organizations."

Related: With an iPhone and the internet, this Syrian satirist is having conversations his countrymen can't

The Syrian mission to the United Nations didn’t respond to The World's request for an interview.

Sara Kayyali, Syria researcher for Human Rights Watch, explains that for years, the government of Bashar al-Assad has used imprisonment and torture as a way to crush dissent.

"Everyone at this point knows what happens if you speak against the Syrian government," she says from Amman, Jordan, where she is based. "They’ll come to your house, they’ll stop you at a checkpoint and you’ll never be seen again."

Kayyali says there is no reliable official system for families to find information about their loved ones once they are detained. That’s why some of them resort to middlemen.

"Because they’re so desperate for answers, a lot of the families are willing to pay bribes, are willing to put themselves at risk, just to get some form of answer regarding where their loved one is and if they can get them released," she says.

Dani Qappani’s brother, Mohammad, worked as a translator in Idlib, in northern Syria. (Dani Qappani is a pseudonym because he fears retribution against his family in Syria. The World is not using Mohammad's last name to protect Qappani.)

In 2012, Qappani said security forces showed up at Mohammad’s workplace and took him away. He hasn’t been heard from since.

"My family tried so many ways to ask about him — by going to the civil registry, by going to the military police, security forces branches in Damascus," Qappani says via Skype from Turkey. "And they said, 'No, we don’t have any information about him.’"

Qappani works for the Syrian Human Rights Network, an NGO that has been monitoring the Syria civil war since it began in 2011.

Qappani says in the seven years since his brother disappeared, his family has heard from plenty of middlemen.

"Many people told us you can pay money to know where he is and to set him free," he says.

Related: Torn apart by the Syrian war, these siblings struggle to stay connected across 6 different countries

But they have also heard stories about scams — where someone pretending to have information about a loved one took the family’s money and vanished.

Qappani says sometimes the asking price is as much as $30,000 dollars.

His family hasn’t paid, he says, but it’s a tough choice. Sometimes they wonder if they truly have credible information about his brother.

"It’s a difficult issue for us," he says.

In the early years of the war, the only way to learn about what happened inside Syrian prisons was to hear from those who had survived it. That’s according to Mai El-Sadany, legal and judicial director for The Tahrir Institute for Middle East Policy, who has researched human rights abuses in Syria.

"Many individuals had shared stories that they had witnessed as former detainees, so a lot of it was based on anecdotal evidence — eye witness accounts which are of course extremely important and powerful," she says.

But El-Sadany says in 2013, something unprecedented happened. A Syrian military officer, code-named Caesar, defected with thousands of photos saved on a thumb drive hidden in his shoes. Researchers got access to 53,000 photos, mostly from detention centers in Syria. Forensic experts examined the grisly photos of the dead bodies that had signs of torture.

The FBI verified their authenticity and Human Rights Watch tracked down and interviewed some of the families.

Caesar testified before Congress in the summer of 2014.

El-Sadany says the Caesar files were invaluable to the documentation of the brutality taking place in Syria.

"Actually having photos and documentation and memos that showed the way these detainees were being treated and the fact that it was systematic really constitutes a breakthrough in the accountability scheme."

'We Have Suffered Enough'

Today, if you ask the Syrian government, the war is over. Assad’s forces have regained control of most of the territory they had lost.

But for the families of the missing and detained, holding president Bashar al-Assad and his forces accountable is long overdue.

Hala Al Ghawi, the woman whose husband was detained for 70 days, testified before the United Nations Security Council last week. She was there with her friend, Amina Khoulani.

Khoulani and her husband were imprisoned in Syria and they fled after they were released. But three of Khoulani’s brothers didn’t make it out. She says they were killed in prison.

"As families, we have suffered enough," Al Ghawi told the Council, "And I’m here today to urge you to action."

Amina Khoulani now at a #UNSC briefing "When photos of murdered tortured detainees were leaked by military defector Caesar, the first image I saw was of my brother Mouhamad’s body. Mouhamad wasn't only my brother but my best friend & the person closest to my heart"@UN @RussiaUN

Al Ghawi and Khoulani were in the same room as representatives from Syria and Russia, which has supported the Syrian government in the civil war.

"At the beginning, I was a little bit anxious to be in the same room as the representatives of the regime,” says Al Ghawi, “but I feel that the voices of the families who have loved ones who are missing, are with me, and gave me the courage to be at that meeting.”

In 2017, Khoulani co-founded Families For Freedom, a group that describes itself as "Syrian families demanding freedom for all of the country's arbitrarily detained and forcibly disappeared." They want the international community to take action — and some have.

Since March 2017, the European Center for Constitutional and Human Rights has filed criminal complaints in Germany, Austria and Sweden, among others against Jamil Hassan, former head of the Syrian Air Force Intelligence Service.

"He is now very, very sick," says Alexandra Lily Kather, who works as legal adviser for the ECCHR's international crimes and accountability program. "He is regularly traveling abroad, predominantly to Beirut for medical treatment. But if he in some time decides to travel to Europe, there’s an Interpol arrest warrant against him," she says.

Mai El-Sadany, with The Tahrir Institute for Middle East Policy, thinks there won’t be sustainable peace in Syria until the government answers questions about the missing and detained.

"These cases may take years, decades to bring to fruition, but the fact that evidence is being collected, that the anecdotes of victims are being upheld, all of those are steps toward accountability," El-Sadany says.

Dani Qappani, whose brother is still missing, says his family won’t stop looking for him.

"We keep hoping," he says. "We keep having him in our hearts and minds, that he’s alive and that he will be free soon with all the detainees."