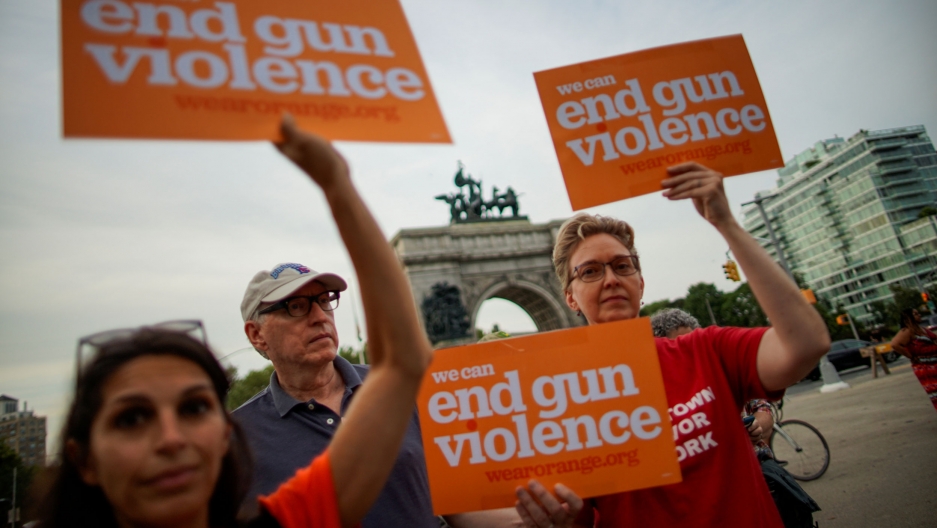 People gather for a vigil to remember victims of the mass shootings at Dayton and El Paso, at Grand Army Plaza in Brooklyn, New York on Aug. 5, 2019.

In 2011, the Obama administration launched so-called Countering Violent Extremism (CVE) programs to combat radicalization nationally and abroad. Under the Trump administration, 85% of these programs' funds — after major cuts — have gone toward initiatives that target Muslims and people of color, while a recent spate of attacks in the United States has heightened concerns about white nationalist terrorism.

In August, two mass shootings within 13 hours of each other left more than 20 dead in Texas and killed nine people in Ohio. The attacker in El Paso, Texas, said he was specifically targeting Mexicans, according to police.

The World's Carol Hills spoke to Fatema Ahmad, deputy director of Muslim Justice League in Boston, about the use of so-called CVE programs and white nationalist terrorism.

Fatema Ahmad: What's wrong with them is that that whole idea that somebody has radical beliefs and that that leads to violence is not real. And if you actually read literature from people who are doing countering-violent-extremism-type programs, you'll often find a disclaimer about the fact that there is no way to actually predict who will commit an act of violence. That's one piece of it.

The other part of it is, 'Who gets to define what a radical belief is?,' or, 'Who has an extreme ideology?,' and the way that that has always been used by these government institutions — the same ones who are now doing CVE — ... against people who are actually standing up for their rights. So, it's been used against — particularly in this country — black folks during the civil rights movement. The way that the FBI talked about these organizations and groups who were fighting for justice is by labeling them as radical. So that's another piece of why this doesn't work. The other part of it is, it's always been about Muslims.

But looking at, say the Obama administration — they were trying to use CVE across a wide range of groups, including white extremist groups. What was wrong with those programs in terms of trying to address these issues?

The Obama administration may have said that they were trying to use it across the board and that's how CVE has always been framed. It uses facially neutral language like extremism to really hide what is behind these programs. But one problem is — even when you're including a few token groups that say that they're fighting white supremacy — that actually just helps to cover the deep problems of this program, which, again, is that it's not a real way to fight violence. It also gives people this idea of, 'Oh, it's equal opportunity, so it's fine.'

In your mind, is there any value at all to these countering violent extremism programs?

The fact that you have institutions like the Department of Homeland Security or the Department of Justice, which are both law enforcement institutions, handing out money to community organizations — some of whom are doing great work — that's part of the problem. On the end of the Muslim community, what we're seeing is, "Oh, we only are getting these resources for things that we desperately need, right?" We do need resources in our community. We do need mental health support. We do need all of these things, but we're only getting them from law enforcement institutions because we're seen as inherently violent. If you're a young Muslim and you realize, "Oh, this after-school tutoring program, I'm only getting this because the Department of Homeland Security thinks that I'm a potential terrorist," — that is horrific. There are plenty of community programs that deserve support. It shouldn't be through this framework.

At this point, do you think that the entire program that the [Department of] Homeland Security and the FBI are funding should be just dumped?

Yes, I think they need to end [it] and I think we need to actually listen to communities about what they really want, and not come at it from a law enforcement perspective.

The interview has been condensed and edited for clarity. Reuters contributed to this report.