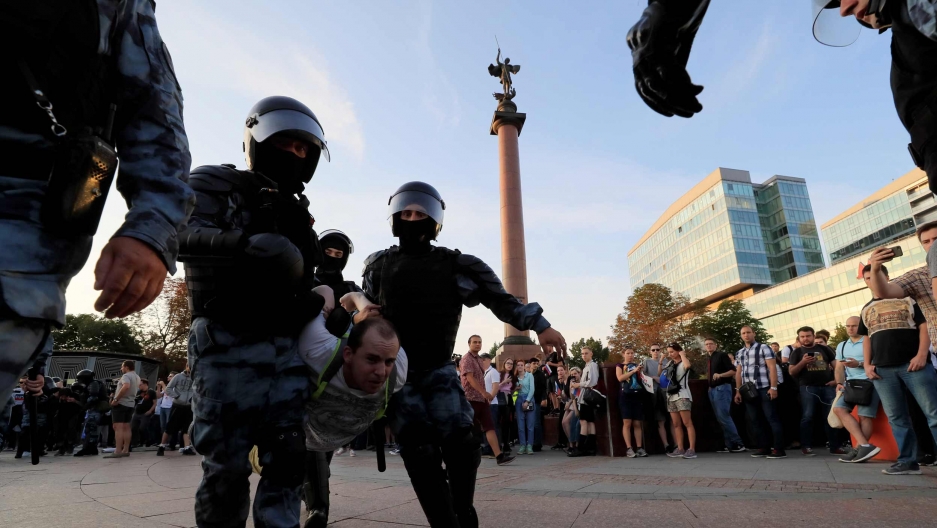 Law enforcement officers detain a participant of a rally calling for opposition candidates to be registered for elections in Moscow on July 27, 2019. More protests are planned for this weekend.

Russian authorities on Friday moved to press criminal charges against 10 people for their involvement in what they called mass unrest at an opposition protest last weekend, as defiant Kremlin critics vowed to hold another rally on Saturday.

Police rounded up more than 1,300 people at an unauthorized protest in Moscow last Saturday in one of the biggest crackdowns of recent years on an increasingly defiant opposition decrying President Vladimir Putin's tight grip on power.

Despite several of its leaders being jailed over the protest for up to 30 days, the opposition plans to stage another rally on Saturday, capitalizing on tensions as Putin's ratings have slipped following years of falling incomes.

Moscow prosecutors on Friday warned would-be protesters that authorities had not approved the demonstration, that its organizers could be brought to account and said it had issued a formal warning to hunger-striking activist, Lyubov Sobol.

Protesters are calling for Moscow city authorities to allow opposition members to be allowed to run in a Sept. 8 local election. They were barred from running for failing to gather enough signatures of support, which they say is a lie.

Sobol said she planned to join the protest on Saturday despite the warning from prosecutors, saying that "Political repressions will grow if we give in!"

Investigators opened criminal proceedings over the protest on Thursday, saying it had identified 10 key suspects in what it said was mass civil unrest last weekend. Organizing mass civil unrest carries a penalty of up to 15 years in jail.

Related: After decades in the shadows, Russia's feminists grab their spotlight

"It's like a huge persecution campaign happening currently," explains Nikita Kulachenkov, an opposition member who works with the Anti-Corruption Foundation. "What is more shocking about that, that all those candidates were arrested. I think 80% of them are now in the detention and they all got something like a one month term in the detention for participating or for calling for protests."

Almost all the candidates running for Moscow's municipal elections are among those arrested, Kulachenkov says.

The World's Marco Werman spoke with Kulachenkov about the protest last week and those planned for this weekend.

Marco Werman: Nikita, you're not in Russia. You reside in Lithuania. How'd you end up there and is it dangerous for you to go back home to Moscow?

Nikita Kulachenkov: Yeah, it's dangerous for me to go back to Moscow because I'm going to be arrested at the border and put in detention for an unknown period of time.

You're certain that would happen if you went back?

And is it true that was all over a stolen poster?

Oh, yeah. You know the story. That's about the stolen poster which happened five years ago, back in 2014. The authorities saw that we got this poster — we actually took that, I was not the only person who was accused of stealing the poster — but we actually took this poster. It was the local artist's, who was drawing those posters on social topics. He was putting them on the walls of the buildings around the city for many years. ... I left Russia in 2014 and then I was on the Interpol wanted list, I was arrested, and lots of interesting things happened.

Nikita, you work a lot with Alexey Navalny, probably the best-known opposition leader, but you're not in Moscow. What's it been like seeing your friends and colleagues getting thrown in prison?

Well, unfortunately, you get used to it. I spent some days in prison, too. It seems that the Russian authorities, they are pretty clever, and they now use the tactics of short arrests — like Alexey spent one-fourth of the year in detention. So he got arrested once in two months for one month which definitely affects his health, which affects our operations, that affects our morale — not his, I think.

And he's in prison now too, right, and allegedly been poisoned. Have you been in touch with him and is he talking about that?

He submitted a complaint to the police in Russia that he was poisoned because before that — when he was sent back from the hospital to the prison — he was a bit skeptical about that. Now, it seems that he changed his mind and thinks that he was somehow poisoned.

Nikita, this weekend, by default, there's going to be a leaderless protest because most of the main opposition leaders are in prison. What are you hopeful for right now?

Looking at this situation, I hope that the local Russian authorities, the Moscow authorities, will change their mind and understand that the bigger problem is with the protest rather than the independent candidates running for the election.