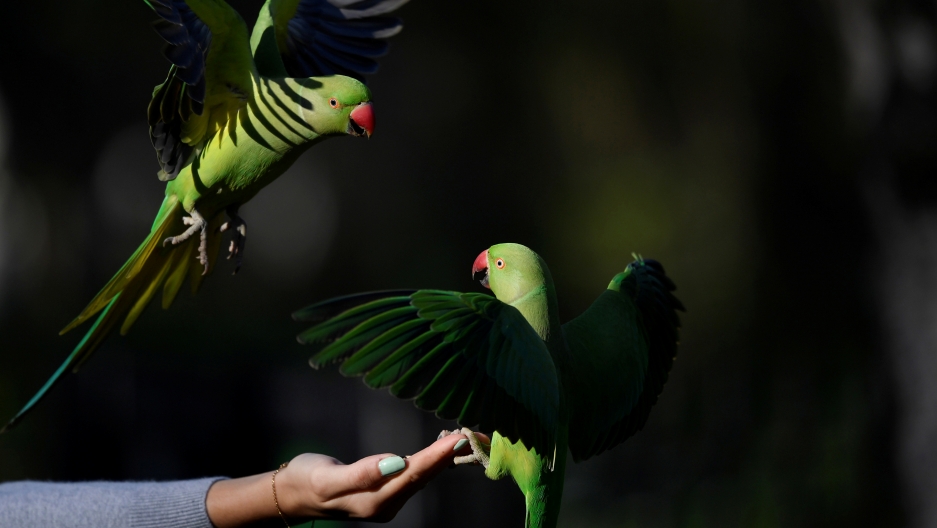 Parakeets compete for food from a visitor in St. James's Park in London, Feb. 27, 2019. At the last official roost count in 2012, researchers counted over 32,000 feral parakeets living in London.

London is at the center of a very loud mystery. A colony of feral parakeets has taken over the British capital. Nobody knows how the small, green birds originating from South Asia and Central Africa came to be in the capital city. While some Londoners consider the foreign birds to be a threat to native birds, others have adopted the colorful parakeet as an unofficial city mascot.

Parakeets are a type of small parrot that is frequently kept as a pet by people all over the world. But in London, if you want to play with a parakeet, you can skip the pet store and go straight to a park. 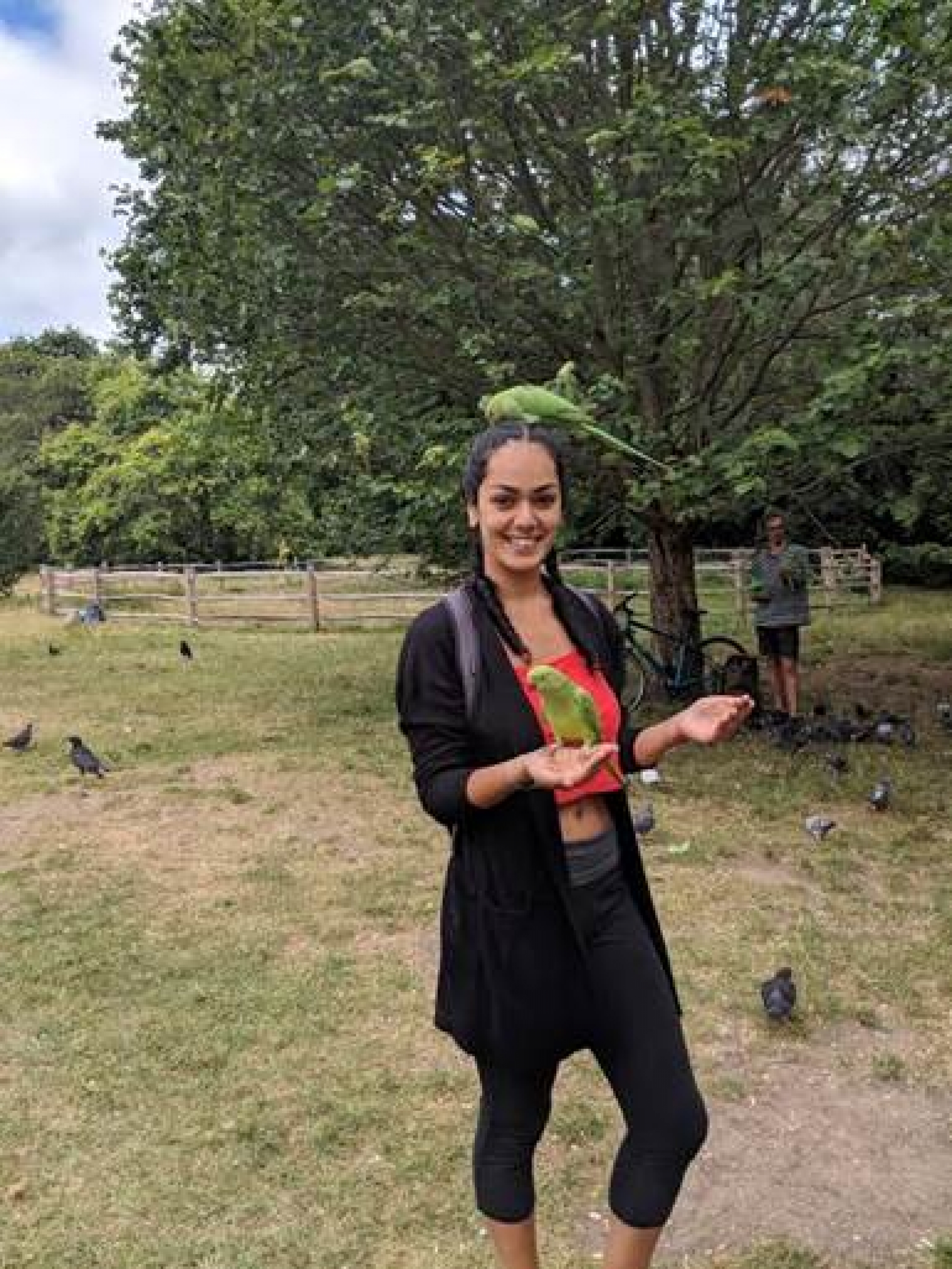 Since moving to London from Australia, Alysia Micali feeds the parakeets in London's Hyde Park every week.

“I love birds, and I think it’s just really awesome to hang out with them and feed them.”

Since moving to London from Australia, Alysia Micali feeds the parakeets in Hyde Park every week. “I love birds, and I think it’s just really awesome to hang out with them and feed them,” Micali said. “It’s just fun to do in the city that you don’t find anywhere else and they’re wild, so they’re not in a cage or anything.” Micali warns that the birds can get a little bit aggressive if you run out of food.

After living in London for nine years, writer Nick Hunt realized that the number of parakeets was rapidly multiplying. At the last official roost count in 2012, researchers counted over 32,000 feral parakeets living in London.

Hunt teamed up with photographer Tim Mitchell on a book called "The Parakeeting of London: An Adventure in Gonzo Ornithology."

“I think one of the reasons this myth is so potent is that they can have a kind of Jimi Hendrix quality, they’re kind of bright, garishly dressed and they have a harsh kind of grating sound that hasn’t really been heard in the city before.”

Hunt and Mitchell first set out to debunk some of the urban legends about how the parrots first came to London, like the story that musician Jimi Hendrix released a breeding pair on Carnaby Street after a wild night in the 1960s. “Nobody seems to have known him to keep parakeets,” Hunt said. “I think one of the reasons this myth is so potent is that they can have a kind of Jimi Hendrix quality, they’re kind of bright, garishly dressed and they have a harsh kind of grating sound that hasn’t really been heard in the city before.” 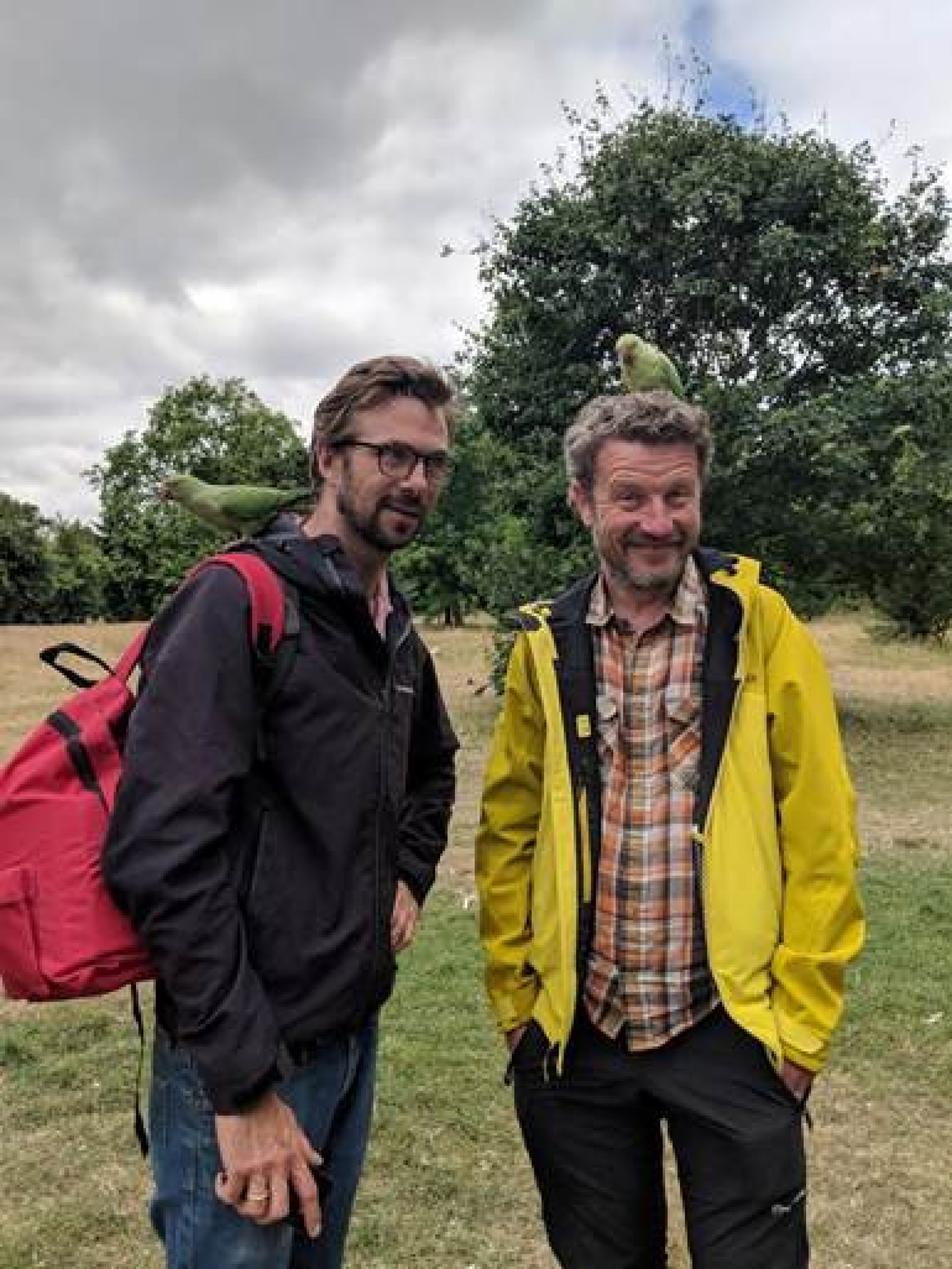 Nick Hunt (left) and Tim Mitchell teamed up to write a book on London's parakeets.

Another urban legend states that the parakeets were released on the set of the film "The African Queen" in 1950. Mitchell thinks that’s bogus. “We’ve fastidiously watched that film and there’s not a single parakeet in it,” he said.

The true origin story is significantly less dramatic. The social birds probably escaped from Victorian aviaries and adapted to city life. That has happened in many other places around the world, like Brussels and San Francisco.

“Geographically, they have a very broad range,” Mitchell said. “And we have loads and loads of trees in the cities in this country.”

Pubs, rugby clubs and even a local beer company have adopted the feral parakeet as a London mascot, but some Londoners see the loud birds as an invasive species. “People who don’t like them say they’re a threat to native British birds,” Hunt said.

The rapidly multiplying parakeets compete with smaller birds for resources like nests and food, and they’re a nuisance to local food crops. However, the British government has decided they’re not a big enough threat to cull the flock. 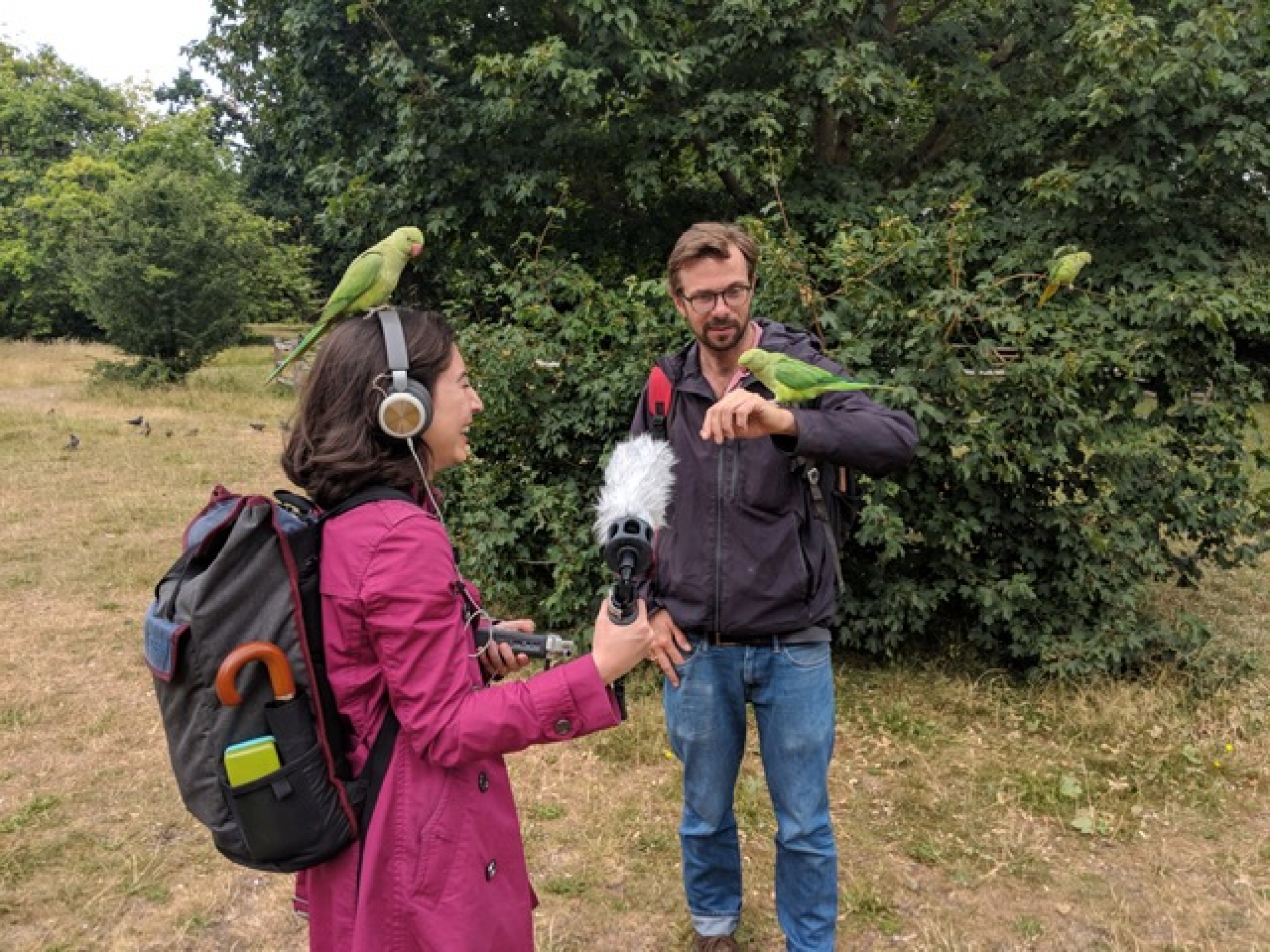 Parakeets find comfortable places to rest on Nick Hunt and Brenda Salinas in a London park.

Hunt and Mitchell believe human activity is a bigger threat to the native bird population than the introduction of foreign parakeets. “The reason why I think kingfishers and woodpeckers are in decline isn’t because of a few tens of thousands of parakeets,” Hunt said. “It’s habitat loss, climate change and pollution.”

London’s parakeets also benefit from the warming climate. In the last 20 years, London has seen 19 of the warmest winters on record. “We got into some interesting thoughts and conversations about the meaning of what is native,” Hunt said. “Does it even make sense in an age where climate is shifting to have this idea of native?”

No matter how they originally came to London, feral parakeets are likely here to stay and to squawk, proving it’s not where you’re from, it’s where you thrive.