Handler Paul Picknell and the Harris's hawk, Lemmy, in London's Trafalgar Square. Lemmy's job is not to hunt pigeons, but to deter them.

Fifteen years ago, the center of London was densely populated — not just with people, but also with birds. Particularly pigeons.

Huge flocks of them would fill the capital's parks and squares. But something has changed. The pigeons are gone. One reason for the pigeon decline can be seen in Trafalgar Square at 7 a.m. every weekday.

Not far from Big Ben, the square is the very center of the city. Even early in the day it bustles with commuters, tourists and school parties. But among all that activity there is a hunter on the loose. A silent killer. One who watches over every movement — from the National Gallery on the north side to Charing Cross Station on the south. Up close to him, you notice powerful shoulders, a penetrating gaze — and also a tendency to twist his head around to the back looking for prey.

That hunter's name is Lemmy, and he is a Harris's hawk. 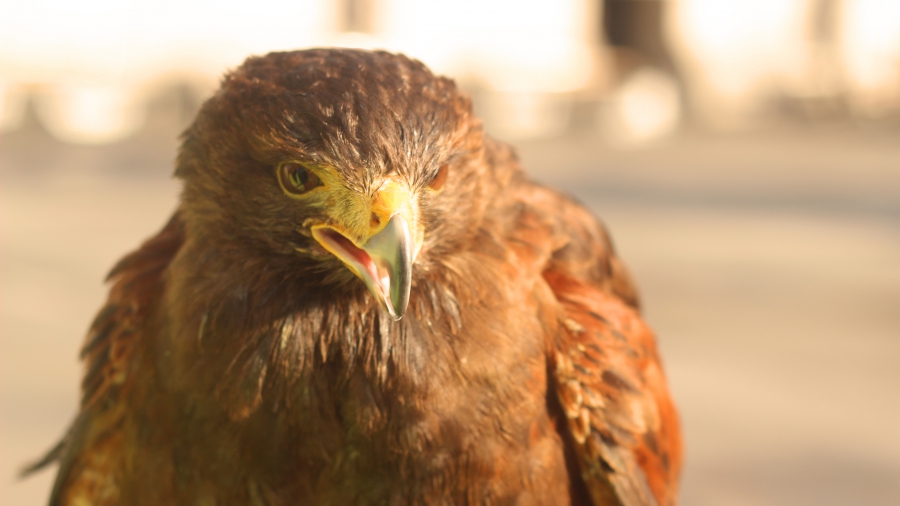 Hawks like Lemmy have been used to deter pigeons in London since the early 2000s.

Lemmy is employed by the Greater London Authority to ensure that places like Trafalgar Square remain free of pigeons, and therefore free of their waste. He works in a team: his handler, Paul Picknell, is employed by Hawkforce, one of London's leading avian security firms.

Speaking to Picknell, there is no mistaking his love for his work buddy. "He's a work colleague, he's a friend. [But he is] essentially a wild animal. Never tame. In amongst all these people — he’ll totally ignore everybody apart from me," he says. "It’s almost a telepathetic communication."

Until the early 2000s, pigeons ruled Trafalgar Square and other open spaces in the center of London. You could buy food to feed them. Even Mary Poppins had a song advising Londoners to feed the birds.

Things changed in 2003, when the mayor of London declared war on the birds. So many pigeons produced a lot of ... waste. And that's not hygienic.

The pigeon feed stall was closed. If Mary Poppins tried to feed the birds now, she would be hit with a fine. But a humane and natural way to move the pigeons on was needed. And that's where Picknell and Lemmy come in.

As Picknell is talking, Lemmy suddenly gags and vomits up a small oily lump of yellowish paste onto the sidewalk. Picknell is relieved. "Oh. That’s what we’re waiting for," he says. "That’s the cast. It’s basically beaks, the feathers, the claws of the food he had yesterday that he can’t digest."

He picks it up and rubs it carefully between his fingers for a diagnosis. It crumbles under his thumbnail. "That one’s quite normal looking. Nothing wrong with this bird. He’s ready to go now."

Although Harris's hawks do hunt birds like pigeons, the idea is not for Lemmy to kill while on duty. He is fed exclusively from a small plastic box of raw chicken scraps. Picknell takes a large handful and fills his pocket with these snacks at the start of every shift.

Instead, the idea is to use Lemmy's presence to deter and intimidate pigeons. "It’s a visual thing. It’s a presence," says Picknell. "The pigeons are aware there’s a bird of prey — there’s predator around, therefore they stay away."

There’s an air of "The Sopranos" when Picknell describes the effect Lemmy's presence has on pigeons. "I suppose he does intimidate them," he says. "The big kid's around. Keep yourself to yourself. Stay out the way."

Unlike other forms of pest control, such as poisoning or shooting, the use of hawks is environmentally friendly and ultimately humane. It is also popular: Picknell and Limmy are constantly pestered for selfies. Some hawks like the attention more than others, Picknell says. Lemmy is not too keen on having his feathers ruffled.

There was some backlash at first — a renegade pro-pigeon activist group is still rumored to carry out vigilante bread distributions somewhere nearby — but the square today is much cleaner. And almost completely free of pigeons.