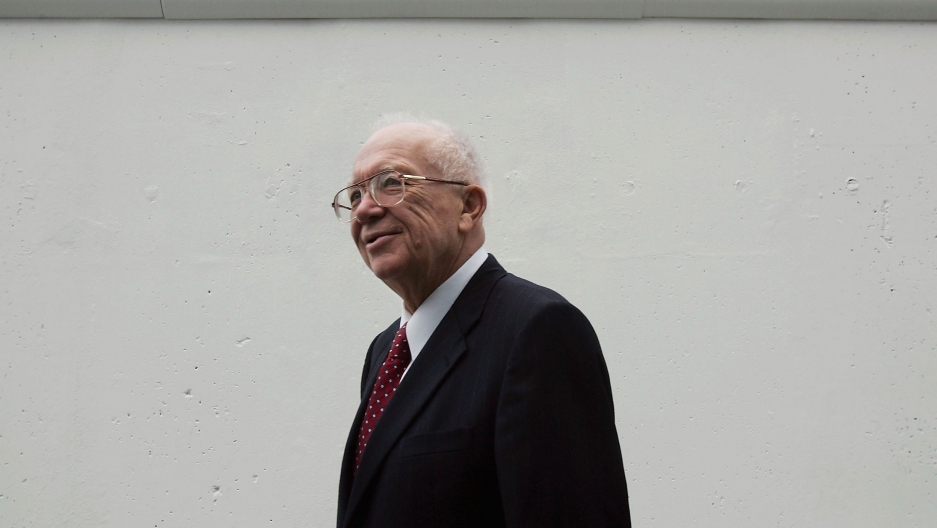 Sergei Khrushchev, son of former Soviet leader Nikita Khrushchev, walks past a rebuilt section of the Berlin Wall and crosses that commemorate its victims on the day of the memorial's unveiling in 2004.

In the summer of 1969 — 50 years ago this Friday — Neil Armstrong took man's first step on the moon.

The US Apollo space program was a massive effort with a massive price tag. It was all developed at a break-neck pace, in slightly more than 10 years. Its start can be traced back to October 1957, when a beach-ball sized metal globe hurtled through space a couple hundred miles above the United States.

That orb was the first artificial Earth satellite — Sputnik. It was launched by the Soviet Union in the midst of the Cold War. Many Americans thought Sputnik was a prelude to nuclear attack.

In Moscow, Soviet Premier Nikita Khrushchev was delighted. He had proof of the Soviet Union’s technological sophistication and a foothold in outer space.

Still, in the Soviet Union, the reaction to the achievement was underplayed, says Sergei Khrushchev, Nikita’s son and a former Soviet missile engineer. "Really we did not expect such a big reaction of the outside world, especially in the United States. In the Soviet Union, it was just much more modest. On the first information about Sputnik, it was only 100 lines in the Pravda newspaper and other newspapers — nothing else."

A US citizen since 1999, Sergei Khrushchev recalls that moment that ignited the space race in “Chasing the Moon," a new PBS documentary series. He also spoke to The World's Marco Werman about the US-Soviet space race and humanity's achievements in space.

The documentary "Chasing the Moon" does a really good job taking us back to the roots of the US-Soviet space race and postwar Germany. The Nazis had built ballistic missiles capable of spaceflight, and at the end of the war, the Americans and the Soviets competed to recruit Germany's best rocket engineers and scientists. The Americans won that battle. How did they do that?

Sergei Khruschev: In the United States, Wernher von Braun became one of the leading engineers in designing missiles here in this country. In the Soviet Union, our rocket engineer and the chief designer Sergei Korolev — he thinks that he can do it better than Germans. So Germans in the Soviet Union more observers of what the Soviets were doing, but not participants in the project.

Wernher von Braun, the young engineering prodigy, had been a member of the Nazi Party and an SS officer. Here he is describing why he wanted to work with US scientists rather than the Soviets:

"This decision was essentially not one of expediency. It was a moral decision. We knew that we had created an extraordinary new weapon with tremendous potentialities and we had seen Germany in the claws of death. And it was our intention to hand our new weapon over to a nation whose leaders, we felt, were governed not by the laws of materialism, but by the laws of Christianity and humanity."

Sergei Khrushchev, I have to ask you as someone who had been invested in the success of the space race on the Soviet side — Wernher von Braun came to the US space program not 20 years after the end of World War II. How have you come to terms with the fact that the US space program happened in large part because of someone who worked for the Nazis just 20 years earlier?

Really we didn't pay too much attention on this because he was not really committed to any war crimes. We thought he was a great engineer and the Americans, they just transported him to the United States. If he will be in the Soviet sector and the Soviets will be [in] control of him, they will do the same with him. But as I told you, Soviets were not interested at that time and they really didn't pay too much attention to them, to the missiles.

Why were the Soviets not interested in him at the time? He may not have committed war crimes but he did develop V2 rockets, which fell on London during the Blitz. Did the Soviets think it was morally unacceptable to employ former Nazis?

No, we did not think at that time it was morally acceptable or not acceptable as he built some weapons that they launched against London. Because we can say the same about the airplane designers who bombed also Great Britain and the Soviet Union. It was part of the war and we have the separation of the people who committed the duties and the people who initiated all these crimes.

In 1961, the Soviets took another big leap ahead in the race to the moon, sending a man into space and bringing him back alive. That Soviet man in space was Yuri Gagarin. Sergei Khrushchev, your father turned Gagarin's orbit into a huge propaganda coup, didn't he?

It's natural. If it will be American, it will be even more propaganda. But it was a really great achievement. When we met Gagarin in Moscow on April 14, it was maybe the same crowds at the same level of celebrations we celebrated the victory over Germany on May 1945. People were on the street, on the roof of the buildings, in the balconies, in the windows toward the Red Square.

Do you have personal memories of that day? How old were you?

[In 19]61, I was 26. I go with my father to the airport. [Gagarin] reported to my father and then after that, they sit in this open car, going to the Red Square. My father was really happy to sit in the back seat behind Gagarin and his wife.

There's a great clip in "Chasing the Moon" where your father gives Yuri Gagarin this huge bear hug, a big bro hug and wet kisses. I mean, I bet Valentina [Goryacheva, Gagarin's wife] was probably jealous. [Laughter.] So shortly after the Yuri Gagarin space shot, President John F. Kennedy in the United States made his big promise.

The unstated goal here, of course, for JFK, was to beat the Soviets to the moon and do it before the end of the decade — 1970 was the deadline. The mission did not move as fast as JFK wanted. He started to worry about what the space program might mean for his re-election. He actually proposed working with the Soviets to pool resources. How did your father, Nikita, respond to that idea?

You know when we're talking about the things we can start with that the President Kennedy decided that he will the race to the moon. My father did was not ready to make this decision. And when Korolev came to him and said, "The Americans go to the moon. We have to build the same project." My father said, "They [are] investing a couple — $20 billion — in this American money, and I have different priority that will improve life of our people. So I'm not ready to race. Let's allow them to go it alone."

It was 1964 only when, under strong pressure, my father agreed to make a preliminary design ... My father was all the time asking how much it will cost. So it was not really a race. But when my father met with Kennedy in Vienna in 1961 and the Kennedy first time offer to join the efforts to fly to the moon, my father denied this. And when I ask him why, he said, "You know, if our engineers will work together and he will work with us, they know that really we much weaker than them and they can provoke them for the first strike."

What do you think might have changed in the course of world history if the Americans and the Soviets had cooperated in this mission to the moon — if it hadn't been a space race, but a space collaboration?

I think it would have saved us money. It [would have been the] beginning of working together on this very expensive space project like we worked later with an international space station and some other project.

We know how the story ended. JFK was assassinated in 1963. Your father was ousted from power the next year. In the US, Presidents Lyndon Johnson and Richard Nixon continued JFK's mission and then US astronauts walked on the moon 50 years ago in 1969. When you and your father received the news of that American moonwalk after all of your own efforts, what sort of emotional reaction did that stir up for both of you?

It was mixed reaction because first we think, "Yes at last they did it." Because after my father it really began the race because [Leonid] Brezhnev was ready to invest money to be the first. And secondly, of course, we were proud that of this world achievement. The same thing that normal Americans were proud when the Soviets first go into orbit. It was really the great leap for humanity. So it was great, great things, what we did at that time.