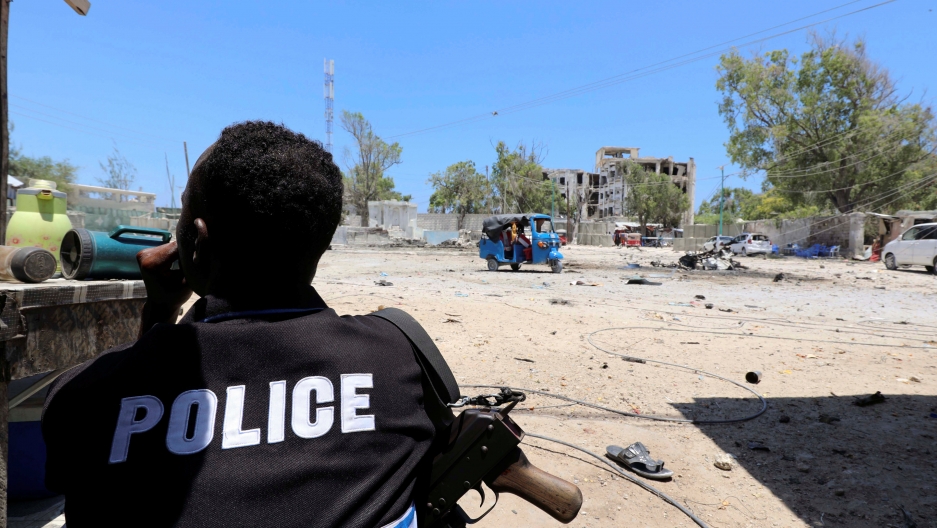 At least 26 people were killed Friday when armed gunmen stormed a hotel and a car bomb exploded in the port city of Kismayo, Somalia, this weekend. Al-Shabab, the al-Qaeda-linked militant group, claimed credit for the attack.

Kismayo is the commercial capital of Jubbaland, a region still partly controlled by al-Shabab, whose fighters frequently carry out bombings in Somalia and neighboring Kenya. Kenyan troops remain active in Somalia as part of an African Union peacekeeping force.

Jubbaland is scheduled to have parliamentary elections this month and presidential elections in August.

Related: Did a US bomb kill an innocent Somali man? His family says yes.

Al-Shabab was forced out of the capital Mogadishu in 2011 and has since lost most of its other strongholds. It was driven out of Kismayo the following year by Kenyan forces. The city's port had been a major source of revenue for al-Shabab from taxes, charcoal exports and levies on arms and other illegal imports.

The US has been battling extremists in Somalia for nearly three decades with various missions from United States Africa Command, or AFRICOM. According to AFRICOM, the US has conducted 110 airstrikes in Somalia since June 2017.

An Amnesty International report released in April 2019 documents the deaths of Somali civilians as a result of these airstrikes.

Bronwyn Bruton, the deputy director of the Atlantic Council's Africa Center, follows Somalia closely and spoke with The World's Marco Werman about the weekend's attack and current politics in Somalia. She says since al-Shabab's inception in the early 2000s, the group has been targeting the Western-backed Somalia government, and the best thing the US could do to help Somalia is to actually negotiate with al-Shabab.

Marco Werman: What do we know about the reasons for the al-Shabab attack over the weekend? Were they targeting specific people?

Bronwyn Bruton: So, al-Shabab has made it a practice since its inception in the early 2000s to target members of the Western-backed Somali government. It's very typical for them to strike any kind of hotel, restaurant or government office where either government officials or people supporting or engaging with the government would be located.

The US has stepped up airstrikes against al-Shabab recently — 50 so far this year. Could this be a response?

Well, I wouldn't say that it's necessarily a response to the airstrikes because I think that it's important for us to understand that al-Shabab is not in conflict with the United States. The US has been constantly hitting al-Shabab with strikes this year, as you said, 50 so far, which is a massive escalation already over last year, which was a massive escalation of the number of strikes the previous year. Al-Shabab is primarily interested in local politics: They want to control Somalia. Their primary reason for existing is to fight the government — the Somali government, not the US. And so I think that the airstrikes have made it less easy for them to attack the government that they definitely — as this strike is probably intended to show — they are definitely [still] able to launch these massive attacks, which is an indication that the airstrikes are not working very well.

Yes. So, what are those airstrikes accomplishing?

Well, you know there's a lot of debate about what the airstrikes are actually doing. I think there is some evidence that they are putting great pressure on al-Shabab and there's some splintering with al-Shabab as a result. But I think even the AFRICOM leadership has been quite candid in saying that it's not very likely that these airstrikes are going to destroy al-Shabab or even debilitate the organization. It's really intended to degrade them a little bit, to give the Somali government a bit more time to make progress. But the problem is that the government has been stalled for 10 years and the US has spent millions on millions on millions of dollars trying to train soldiers for the government that keep on defecting. And there's really no command and control in the Somali army and there's not a strong sense of loyalty. So, it's primarily a set of political problems that are not going to be solved through military force. And the American government, in using military force and drone strikes, in particular, is running the risk of alienating the Somali people because obviously civilians are increasingly being caught up in these strikes — children, mothers, villages have all been hit. And as a result, it may be that al-Shabab actually sees an increase in public support, which would obviously be very detrimental to what the US is trying to accomplish.

The US has been involved in Somalia it seems now for decades. Today, does the US have a policy for bringing peace to Somalia?

The US doesn't have any kind of a plan for bringing peace to Somalia. It's consistently said that it's trying to build a government. It's trying to empower the government, but it's not elected. And I think there's still a lot of uncertainty in Somalia about what a government should look like and certainly a lot of dissatisfaction about what this particular government looks like. Across the country, you see regional administrations popping up that are basically clan fiefdoms, all of whom are at odds with the central government. So, it's really been consistently a case of one step forward, two steps back. And throughout — the US has been actively involved in Somalia since 2003-2004 and we've been funding peacekeepers since 2007 — the situation in Somalia hasn't meaningfully improved. If the peacekeepers were to withdraw, the government that the US has been backing would collapse in minutes. And al-Shabab would take over the country. And the fact that we keep hitting them with airstrikes is not really improving that situation.

So, the attack this weekend. Are there any signs that it could have been linked to upcoming Somali regional elections?

As I said, these strikes from al-Shabab just happen so very frequently. It's not likely that they were specifically connected to the elections but if elections are held, obviously al-Shabab is going to attempt to disrupt them and you would expect a lot of people will be killed in the process. So you have to stop and ask: Is it wise to try to hold elections? Will it be possible to hold elections? And I think it's looking increasingly likely that next year, instead of a one-person, one-vote situation, you're going to have another election by proxy, where a certain number of representatives elect — so-to-speak elect — a new government on behalf of the people. And those exercises have always been very corrupt and they've led to a lot of dissatisfaction and poor outcomes in terms of governance.

What do you think is the best way the US can help Somalia right now?

In my view, the best thing that the United States can do is to negotiate with al-Shabab. We have for many, many years described al-Shabab as a terrorist organization. But that's not all that they are. As I've said, primarily they are a group that objects to the Somali government. They have never directly targeted the United States. They have done a lot of things to improve governance on the ground in Somalia. Although they have been very harsh, they've also increased the rule of law and access to justice and a lot of Somalis depend on them. And I think what's important for the US is to try to recognize the things that al-Shabab has accomplished and find a way to coexist with them and to negotiate with them to get them to agree, for example, not to target neighboring countries, not to target Christians. It's also important to point out that al-Shabab's relationship with al-Qaeda has been quite tempestuous. As far as partners go, they've been a pretty poor one. I think that the alliance is quite weak. And so, again, the possibility of working with al-Shabab to perhaps draw them away from al-Qaeda and find a way to coexist with them is not impossible. And I think it's in the US interest to do that because the current intervention has no end in sight.

Aren't there a lot of activists, though, in Mogadishu, who've been targeted by al-Shabab, women especially, who say al-Shabab has no credibility left?

Well, the problem is that yes, it's true that many people feel that al-Shabab has no credibility. Many people feel the government has no credibility. The government has also targeted activists and women and the peacekeepers, unfortunately, have also targeted women and children in indiscriminate airstrikes, a decade ago, to indiscriminate airstrikes by our allies, now. Unfortunately, there's no one in Somalia with clean hands.