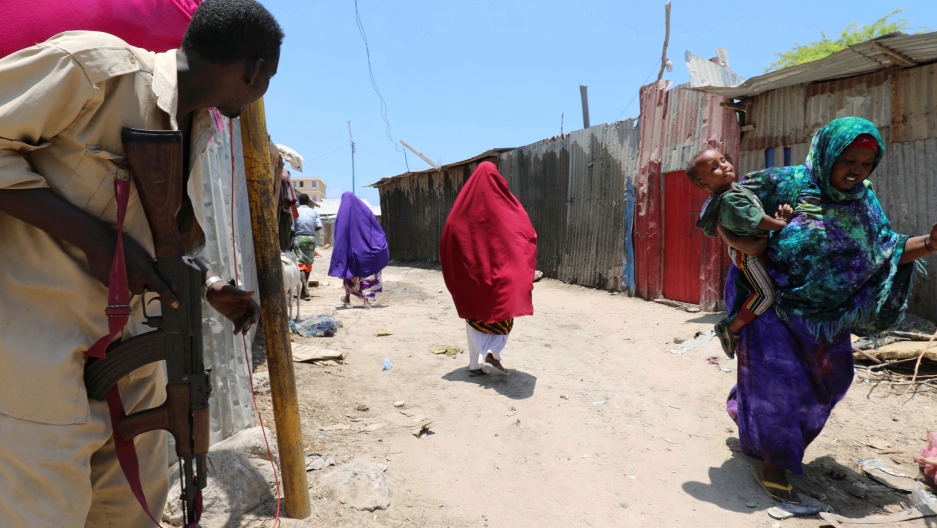 A Somali soldier holds position as civilians evacuate from the scene of a suicide explosion after al-Shabab militia stormed a government building in Mogadishu, Somalia, March 23, 2019.

Three farmers were sleeping under a tree when they were fatally hit by US airstrikes near the rural town of Darusalam, Somalia, in November 2017, according to a new report by Amnesty International.

The farmers were al-Shabab terrorists — according to the United States Africa Command or AFRICOM, which leads US military operations in Somalia.

But Amnesty has argued that overly broad strike criteria are putting young Somali men — some who are farmers living in remote areas — at risk of being indiscriminately targeted by airstrikes.

Under a shroud of secrecy, US military counterterrorism operations in Somalia have surged under Trump administration, along with a lack of transparency in terms of civilian casualties.

The US has killed 800 terrorists and conducted 110 airstrikes in Somalia since June 2017, according to AFRICOM. Many are in the al-Shabab-controlled areas of Lower and Middle Shabelle region of the country.

Related: The death of a Navy SEAL reveals US mission creep in Somalia

The new report by Amnesty says the US military could be guilty of war crimes for killing civilians during airstrikes in Somalia. They documented 14 civilian casualties from just five airstrikes conducted between 2017 and 2018. These casualties were not reported by AFRICOM.

They denied any civilian deaths until April 5, when AFRICOM acknowledged at least two civilian casualties in an April 2018 strike after conducting an internal review last month.

"US Africa Command is committed to transparency in its reporting of civilian casualties. While believed to be an isolated occurrence, the reporting error is being addressed," AFRICOM said in the statement.

In an executive order earlier this month, President Donald Trump revoked an Obama-era policy requiring the government to publish statistics on civilian casualties.

“The fact that [AFRICOM] says they are not killing civilians in these airstrikes needs to be questioned."

“The fact that they say they are not killing civilians in these airstrikes needs to be questioned,” said Abdullahi Hassan, a researcher on Somalia at Amnesty International.

Analysts like Hassan worry that the increased airstrikes and lack of transparency about the civilian cost are having unintended consequences on the humanitarian and security situation in Somalia, exacerbating internal displacement and creating the conditions for radicalizing Somali youth.

Despite the rapidly increasing airstrikes, al-Shabab continues to orchestrate deadly attacks in the region.

Between March 21 and March 28, over 40 people were killed in nine explosions in Somalia’s capital of Mogadishu. 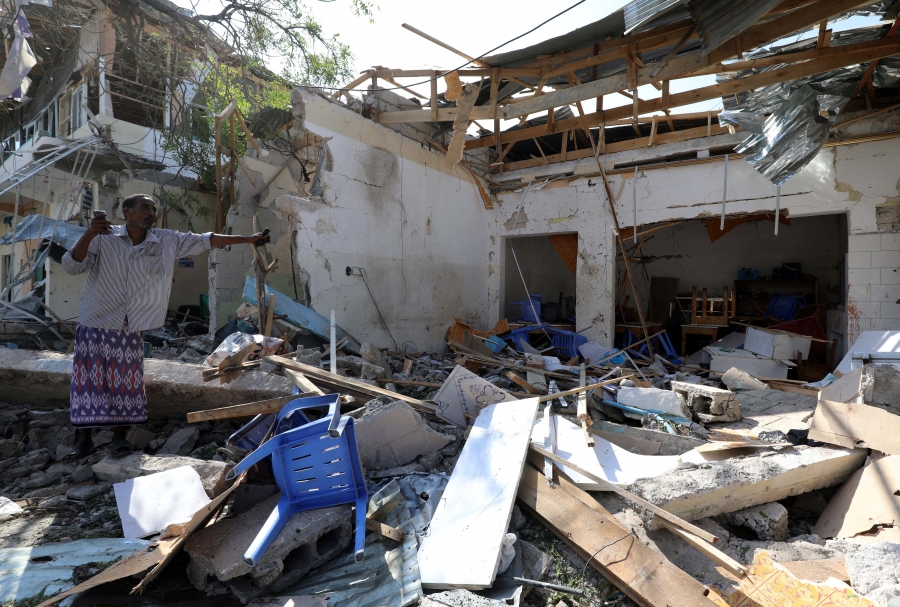 A man stands in the ruins of a building destroyed in an explosion in Mogadishu, Somalia, March 28, 2019.

Amnesty has called on the US to investigate the claims, but the military has rejected their findings.

The report has brought intense scrutiny to the growing secrecy of  US airstrikes in Somalia that have almost tripled since 2017, when President Donald Trump began rolling back Obama-era regulations on airstrikes that were created to protect civilians.

Hours after the US airstrike in Darusalam killed three farmers, staged photos of the victims were uploaded onto a known pro-al-Shabab website.

While smartphones have long been banned in areas controlled by al-Shabab, pictures of civilians allegedly killed in airstrikes are shared on social media by the terrorist group, often accompanied by text decrying the deaths of Somalis by foreign actors.

This has worried some analysts, who expect the propaganda could be used as a tool for recruitment and radicalization in the future.

“Al-Shabab can use this grievance [of civilian deaths]. ... If this continues, we can expect more radicalization."

“Al-Shabab can use this grievance,” said Roselyne Omondi, the associate director of research at the HORN Institute in Nairobi. Omondi noted how al-Shabab often presents itself as defending Somalia against foreign intruders. “If this continues, we can expect more radicalization.”

Similarities have also been drawn to how US airstrikes in Iraq and Afghanistan were used by militant groups to radicalize and spread anti-American sentiments.

“It is in the interest of the terrorist group al-Shabab to untruthfully claim civilian casualties,” AFRICOM said in a press statement. 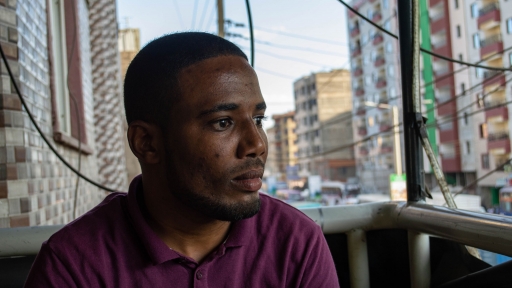 Abdihakim Bare Hassan, 27, is a Kenyan Somali who works for Eastleighwood, a media company that counters youth radicalization and violence in Kenya and Somalia, April 3, 2019.
Credit:

Abdihakim Bare Hassan says he is not surprised that al-Shabab is turning civilian casualties from US airstrikes into online propaganda. The 27-year-old Somali Kenyan works for the media company Eastleighwood, which uses media and art to counter youth radicalization in Kenya and Somalia.

Located in the predominantly Somali Eastleigh neighborhood in Nairobi, known as "Little Mogadishu," the group trains youth who have been or are currently at risk of gang recruitment or extremist radicalization.

They receive referrals from police or local administrators who link the organization with youth identified as at-risk. Eastleighwood has worked with over 6,000 youth since the group started in 2011 — the same year Kenya entered Somalia.

Related: Al-Shabab kidnaps Somali children to fill its ranks. Parents pull kids from school or flee to protect them

Bare Hassan says that at the end of the day, civilian casualties from airstrikes pales in comparison to those caused by al-Shabab.

Between 2016 and 2017, the UN documented 4,585 civilians casualties in Somalia. Sixty percent were attributed to the terrorist group.

“Now they post dead bodies from US airstrikes?” Bare Hassan said incredulously. “What do you take them for? They kill hundreds of people every month.”

“I don’t think air strikes will end this.”

While Bare Hassan is hopeful in the US military and Somali government, he is skeptical that airstrikes alone will defeat the terrorist group. “I don’t think airstrikes will end this.” 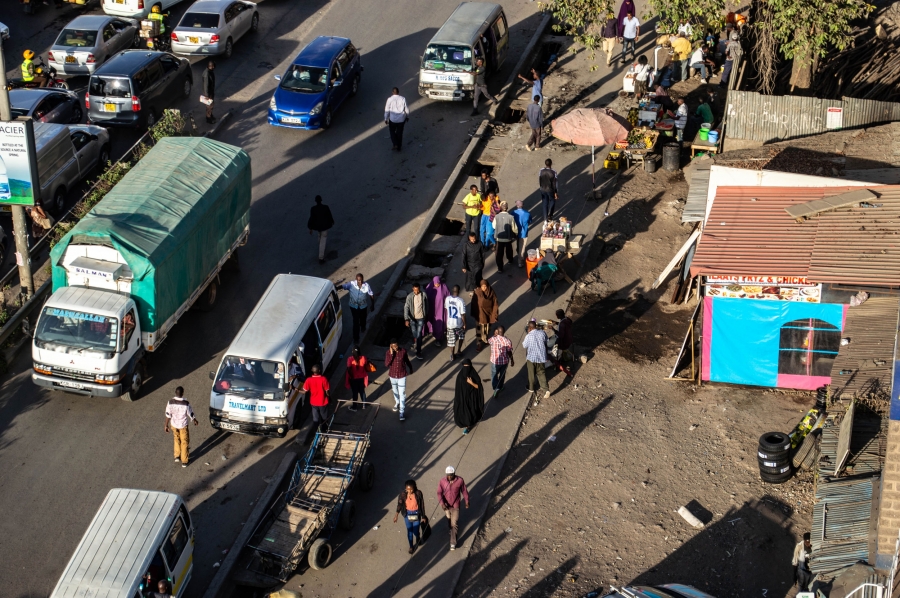 Pedestrians in the Eastleigh neighborhood of Nairobi, Kenya. Wednesday, April 3, 2019. The neighborhood has become a diverse hub for Somali refugees and immigrants, and is often referred to as "Little Mogadishu."
Credit:

In the past two decades, a combination of prolonged civil war, deadly terrorist attacks, and recurring drought in Somalia has led to over 2 million internally displaced people in the country. Researchers now note that foreign-led airstrikes, including those from Kenya, are now contributing to the problem.

“We are alarmed that the number of airstrikes in Somalia has sharply escalated this year. ... More airstrikes and fighting mean more families will flee their homes, and more civilian lives will be at risk.”

“We are alarmed that the number of airstrikes in Somalia has sharply escalated this year,” said the Norwegian Refugee Council in a statement. “More airstrikes and fighting mean more families will flee their homes, and more civilian lives will be at risk.”

According to a United Nations High Commissioner for Refugees report from November 2017, aerial bombardment and ground fighting in Lower and Middle Shabelle regions caused more than 10,000 people to flee their homes.

That number has reached a four-year high, outnumbering those fleeing drought, according to the NRC.

Many of the people interviewed for the Amnesty report lived in Internally Displaced Persons, or IDP camps, and were displaced multiple times, including due to air strikes.

The Somali economy remains primarily agricultural, and livestock accounts for an estimated 40 percent of the country’s gross domestic product. While vicious cycles of drought and famine have plagued the country for years, the areas targeted by US airstrikes are some of the most fertile areas in the country.

Some researchers are concerned about the long-term impact of strikes on farming and food security. Especially since those killed are often the breadwinners for their families.

The United Nations has also recorded how foreign airstrikes have destroyed livestock and displaced pastoralists.

“Even the animals, the goats, the sheep, they are also dying because of the strikes,” said Abdiwahab Sheikh Abdisamad, a Horn of Africa analyst in Nairobi.

“...The farmers fear the air strikes. They can’t even cultivate because they are not sure what will happen if they go out to the fields,” Abdisamad said.

“These people are victimized twice. ... They fear al-Shabab, and at the same time they fear the drone strikes.”

Somalis who flee to IDP camps have already faced a number of abuses.

“These people are victimized twice,” Hassan from Amnesty said. “They fear al-Shabab, and at the same time they fear the drone strikes.”

Amnesty sees AFRICOM’s admission of error as further proof of the need for more investigations into civilian casualties in US airstrikes in Somalia.

“Now they know that these kinds of mistakes were made by their staff," Hassan said. "Now they need to take all the allegations seriously and investigate properly."