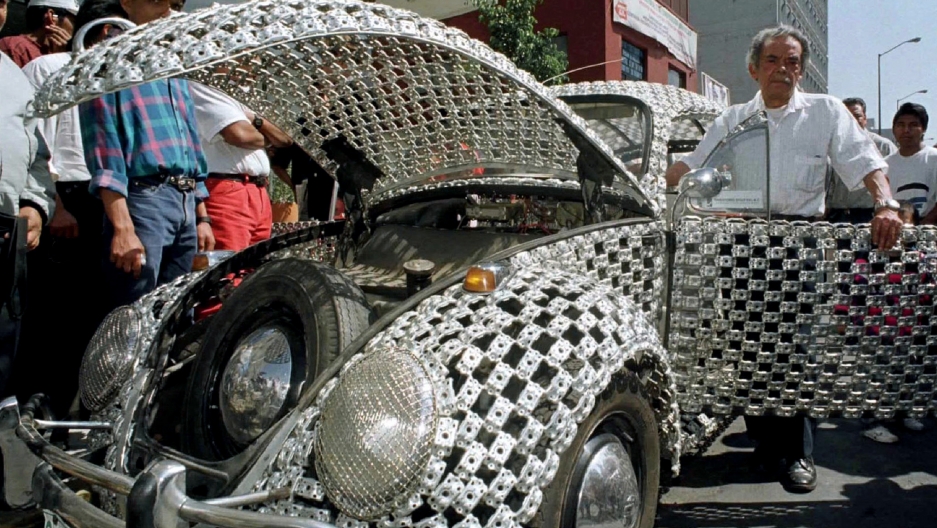 Martin Gutiérrez Sandoval, a 70-year-old former factory worker, displays a 1968 Volkswagen Beetle he built out of 2,740 reject record player parts, Feb. 19, 1996, in Mexico City. His car made it into the 1997 edition of the "Guinness Book of Records" in the "Feats of Man" category.

In 1999, there was a competition to name the car of the century. The Ford Model T came in first, followed by the Mini, the Citroen DS and, in fourth place, the Volkswagen Beetle.

There truly was no other car like it: a tiny, round bubble with an engine in back. Everybody could instantly identify the “Bug.” It was Bernard Swiecki’s first car, a present from his parents for his 16th birthday in 1993.

“It was a 1972 Beetle in yellow, so I really understand how folks get emotional and attached to these vehicles,” says Swiecki, who is now with the Center for Automotive Research in Ann Arbor, Michigan. “It just had a whole different look than everything else; that rear-located engine, it sounded different going down the road.”

But the car had its limitations.

“Not at all fast,” says Swiecki. “That vehicle was barely fast enough to get out of its own way. And so quite often you really had to work that engine just to keep up with traffic.”

Paradoxically, that’s part of what made it so fun. Beetle owners took great pride in tricking out their cars.

“From the front bumper to the rear bumper,” says Swiecki. “Certainly engine performance is always a key thing to modify. One heck of a lot of interior customization with different seats, colors, customized paint jobs, literally the entire vehicle is an open pallet for someone to express themselves.”

Commercials for the Beetle didn’t even need words, just images. The Beetle was cool, hip, a symbol of '60s counterculture.

The car was also affordable.

The Beetle peaked in popularity in the 1960s in the US, its main market. There was another selling point to it: good gas mileage. Volkswagen advertised that the Beetle got about twice the gas mileage of the average car.

For all of its later success, the Beetle had ignominious beginnings. It was developed in 1938 in Nazi Germany. Adolph Hitler wanted an affordable vehicle for the masses, and so “The People’s Car,” designed by Ferdinand Porsche, was born.

By the 1960s, the past was mostly forgotten. Then the Beetle had become a movie star. Disney produced six movies about Herbie — the latest in 2005 — about an anthropomorphic Beetle with a mind of its own.

The Beetle sold nearly 23 million units over 80 years. But by 2017, sales had ground to a trickle and plans were announced to discontinue the car. The Beetle was no longer in sync with the times.

Dave Cole, chair of AutoHarvest in Ann Arbor, says car buyers throughout the world want crossover vehicles, which are basically small SUVs: “When you look at the Beetle, as an example, [it can] carry a few people, not much stuff. And what the marketplace is basically saying is that we want more flexibility in the vehicles that we buy.

“We want the performance, the fuel economy, of a passenger car, but we want some of the utility of sport utility vehicles. And I think that's why we’re seeing essentially almost a total demise, certainly in the domestic Big Three, of cars.”

Related: Mexico City to retire the last of its VW Bug taxis

Volkswagen shifted production of the Beetle from Germany to Mexico in the late 1970s. The last Beetle will roll off the line today at the plant in Puebla, Mexico.

The original Beetle was actually canceled 16 years ago, but was replaced by a “New Beetle,” similar in style, but more powerful and with the engine in front. Dave Cole says predicting the future of cars today is impossible.

“Who knows what the marketplace is going to do,” says Cole “We have seen the resurrection of Beetle Two after Beetle One. Is there going to be a Beetle Three? We don’t know.”

The head of VW Group of America, Hinrich Woebcken, said in a statement that the carmaker has no plans to revive the Beetle. But he added: “Never say never.”