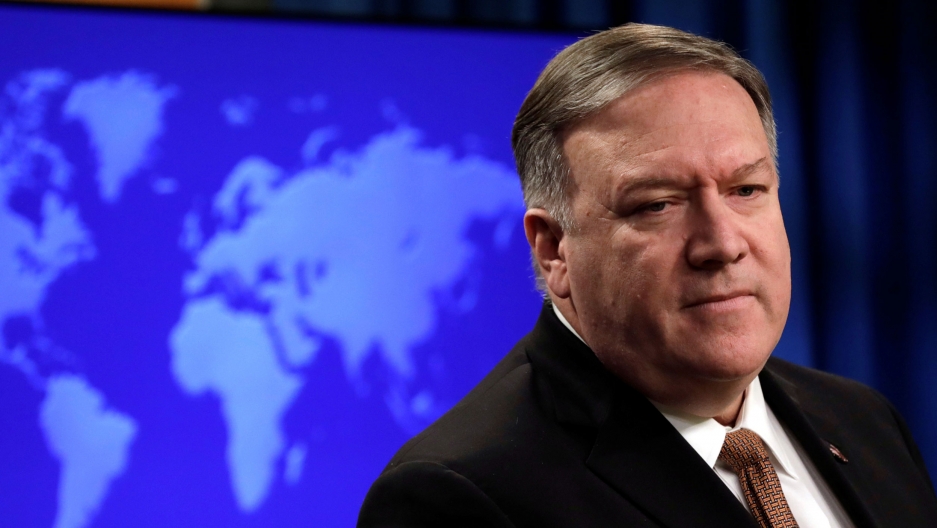 US Secretary of State Mike Pompeo looks on during a briefing on Iran at the State Department in Washington, US, April 8, 2019.

In recent months, Secretary of State Mike Pompeo and other Trump administration officials have been trying to convince Congress that Iran has ties with al-Qaeda and the Taliban.

"Iran’s connections to al-Qaeda [are] very real," Pompeo declared in April. "They have hosted al-Qaeda, they permitted al-Qaeda to transit their country. There is no doubt there is a connection between the Islamic Republic of Iran and al-Qaeda. Period. Full stop."

Pompeo also gave a classified briefing to the House of Representatives in May. Michigan Democrat Elissa Slotkin was present in that meeting, and she later recounted what the secretary of state said.

"We were absolutely presented with a full formal presentation on how the 2001 AUMF [Authorization for Use of Military Force Against Terrorists] might authorize war on Iran," she said. "Secretary Pompeo said it with his own words. I don’t want to go into the details. He referenced a relationship between Iran and al-Qaeda."

Members of al-Qaeda, a hardline Sunni Muslim group, generally consider Shiite Muslims to be apostates. Iran is a Shiite-majority country, so it would make sense for al-Qaeda to disdain the Islamic Republic. But the relationship between the two is much more complicated.

According to the 9/11 Commission report, "in late 1991 or 1992, discussions in Sudan between al-Qaeda and Iranian operatives led to an informal agreement to cooperate in providing support — even if only training — for actions carried out primarily against Israel and the United States."

There are other examples of interactions between Iran and al-Qaeda, some of which are detailed here. But there is also evidence that questions the strength of this relationship.

In 2011, when US Special Forces raided Osama bin Laden's compound in Abbottabad, Pakistan, they left with more than Bin Laden's body.

Related: Could Iran be at risk for another revolution?

They took with them hard drives containing thousands of files that belonged to Bin Laden. The US government released them in batches over a period of years.

These documents were a true gift to researchers like Nelly Lahoud, a senior fellow with New America's International Security program.

"This is very high-value information," Lahoud explains, "because Bin Laden was not addressing you and me. He was addressing his associates in Waziristan [Pakistan], he was writing to members of his family. These were not meant to be for public consumption. In many ways, these were al-Qaeda secrets."

Lahoud pored over them.

Her interest in these documents, she says, was part of a broader question about al-Qaeda's contested ties with state actors.

"The states that are often accused of enabling al-Qaeda are Iran, Pakistan and Saudi Arabia," she explains, "such claims need to be examined carefully, not least because al-Qaeda is a group that rejects the legitimacy of the world order of nation-states, including Muslim-majority states."

Lahoud has been working on these documents since 2012. Now that all of them have been declassified, she is writing a book. One of the questions she wanted to answer is: How does a Sunni extremist group like al-Qaeda think of Shiite Iran? She also wanted to find out whether the two collaborated for the purpose of carrying out terrorism.

"It is beyond any doubt that al-Qaeda viewed Iran in strictly hostile terms," she says. "A recurring word in reference to Iran is the Arabic word ‘ghadr,’ which means 'betrayal.'"

Lahoud says after the US toppled the Taliban in Afghanistan in 2001, some al-Qaeda members who were taking refuge there fled over the border to Iran. But Iranian authorities eventually arrested some of them. They detained Osama bin Laden’s sons, one of his wives and other top al-Qaeda members.

Lahoud says the documents tell us that the al-Qaeda members in Iran were not exactly welcomed guests.

"In fact, one of the documents states that operatives should read a specific ideological treatise to prepare them to commit suicide if they fear they are going to be captured by the enemy, with an allusion to Iran."

Why do relations between Iran and al-Qaeda matter?

Three days after the 9/11 attacks, after attending the National Prayer service, members of Congress voted on a bill that gave President George W. Bush the authority to go to war with al-Qaeda and any related organization without Congressional approval.

Since then, presidents from both parties have used the Authorization for Use of Military Force (AUMF) from 2001 and the one passed in 2002 to justify military operations all over the world, including drone attacks, air strikes and the detention of prisoners in Guantánamo Bay.

"It really runs the gamut, depending on what the strategic objective that folks are pursuing there is," says Scott R. Anderson, a fellow in governance studies at the Brookings Institution.

Related: After decades of US economic warfare against Iran, more sanctions

Anderson, who was a State Department lawyer during the Obama administration, says to be targeted under the AUMF, non-state actors would have had to enter the fight against the US right alongside al-Qaeda and the Taliban, "meaning that they are actually attacking the United States and coordinating with al-Qaeda and the Taliban, ideologically if not actually coordinating. Or, at times it’s been applied to groups like ISIS that evolved from al-Qaeda."

But Iran’s interactions with al-Qaeda, he goes on to add, don’t rise to that level.

So to use the 2001 law to justify going to war with Iran "would be stretching the text of the AUMF and the legal theories that have been developed around it far further than they have been a stretch in the past," he says.

In the buildup to the US invasion of Iraq in 2003, Bush administration officials claimed that Iraq’s President Saddam Hussein had secret connections with al-Qaeda.

Later on, the government’s own assessments determined there was no evidence of any ties.

"I’d prefer to leave that to the lawyers," Pompeo responded. Paul wasn't satisfied with this answer and pressed Pompeo. After some back and forth, he made his point:

"If you want a war with Iran, you have to come to us," Paul said. "It’s the way the Constitution was written and it needs to be very clear [...] and saying ‘well, the lawyers…’ No, no, this is our history. This is a very important question."

Related: Nuclear deal rollback won't get Iran a weapon — yet

Meanwhile, some lawmakers have been introducing amendments to curtail the government's use of AUMF to go to war with Iran.

One was introduced by Democratic senators Tom Udall of New Mexico and Tim Kaine of Virginia. It was an amendment to the Defense bill which prohibited the use of force against Iran unless specifically authorized by Congress. The Senate rejected it Friday.

Separately, the House has yet to vote on other amendments regarding AUMF.

'The value of diligent congressional oversight'

"The fact that the 2001 Authorization for Military Force is being invoked at all is deeply concerning," says Tess Bridgeman, a senior fellow at NYU Law School’s Center on Law and Security and former special assistant to Obama.

Bridgeman says Congress passed AUMF almost two decades ago, and it has already been interpreted broadly to justify attacks on groups that didn’t even exist then.

"The idea that the 2001 AUMF would be used against a country that was not implicated in the 9/11 attacks, whose forces are not al-Qaeda or the Taliban or their associated forces or a successor to any of those forces … that’s completely different and new here and that’s why this theory is absolutely spurious."

Meanwhile, on Friday the State Department responded to an inquiry from the House Foreign Affairs Committee explaining that neither the 2001 AUMF or 2002 AUMF could be used to go to war with Iran.

"This is a really important admission," Bridgeman wrote in an email, "and shows the value of diligent congressional oversight and the level of increased engagement on these issues."