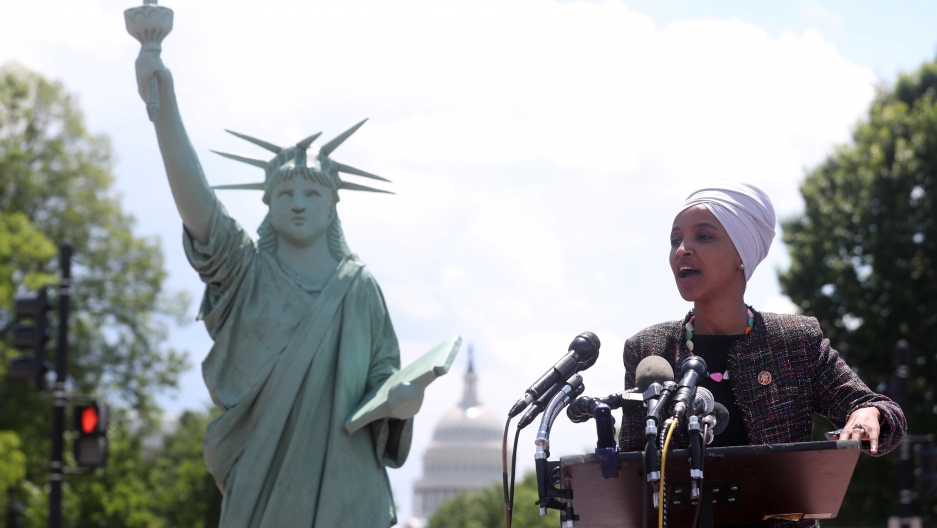 US Representative Ilhan Omar addresses a small rally on immigration rights at the temporary installation of a replica of the Statue of Liberty at Union Station in Washington, DC, May 16, 2019.

The number of people worldwide who are fleeing war, persecution and conflict exceeded 70 million in 2018. That's according to the United Nations Refugee Agency's annual Global Trends report. Of those people, 25.9 million are refugees, meaning they've fled their country's borders in search of safety; 41.3 million people have been uprooted within their countries; and 3.5 million are asylum-seekers.

US President Donald Trump has made reducing irregular migration along the border with Mexico one of his signature policy pledges, extending those sentiments to asylum-seekers outside of North America. His administration recently cut hundreds of millions of dollars in aid to El Salvador, Guatemala and Honduras, and halted its funding to the United Nations Relief and Works Agency for Palestine Refugees in 2018. He has also drastically cut the US refugee admissions program from 85,000 in 2016 to a cap of 30,000 this year.

Minnesota Rep. Ilhan Omar, a Somali American who arrived in the US as a refugee in her teens, has been vocal in defending refugee rights and pro-refugee policies.

Omar spoke with The World’s Monica Campbell about her stance on the refugee crisis, US tensions with Iran and how she thinks the US should handle migrants at the southern US border.

Monica Campbell: I wanted to speak with you about the refugee crisis and immigration in the US. But first, the drone attack is top of the news today, and you sit on the Foreign Affairs Committee. Should the US respond and how?

Ilhan Omar: Well, I think it's too new — and so I will reserve comments on that. We have the opportunity to get a briefing in a little bit. As you probably know, I am one to never be interested in engaging in warfare. As a veteran once told me, "Boots on the ground means boots in the grave." And as a survivor of war, I gravely understand that more than anyone else. And we want to make sure that we're not getting ourselves in another endless war. We have opportunities, we have tools in our toolbox, and we're at a position, I think, to explore what other tools we can use that are not going to cause the deaths of Americans and the deaths of Iranians and others in the Middle East.

"We have to look at our immigration process through a humane lens and what this administration is doing really is truly inhumane, it's extremely un-American."

I would like to return back to the refugee and immigration story. Trump is threatening to deport millions of undocumented immigrants starting next week. He and the acting director of Immigration and Customs Enforcement are sending a message to families in parts of Central America not to come. Some say that's not an easy option for some families. Where do you stand on this?

We have to look at our immigration process through a humane lens, and what this administration is doing really is truly inhumane, it's extremely un-American, and it goes against our values. We're talking about people who are coming to our borders seeking asylum. And there's nothing illegal about seeking asylum, and so we have an opportunity to use the resources that we have to properly process people. We have an administration that is hell-bent on making people seem as if they are breaking laws when they are just within the borders of what is allowed by international law. 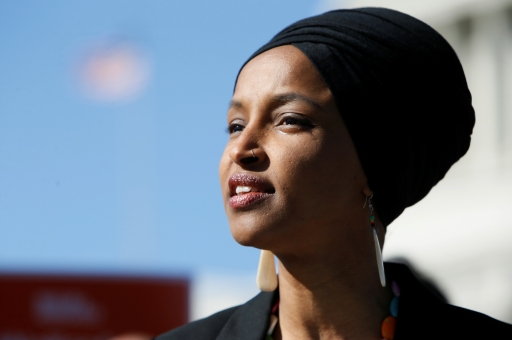 Rep. Ilhan Omar (D-MN) speaks about Trump administration policies towards Muslim immigrants and her own immigrant background at a news conference by members of the US Congress "to announce legislation to repeal President Trump’s existing executive order blocking travel from majority-Muslim countries" outside the US Capitol in Washington, US, April 10, 2019.

You were a refugee yourself from Somalia. How does your personal experience shape your views on how the US is handling migrants at the border?

Today's is World Refugee Day. Yesterday, I had an opportunity to have some refugees in my office, and we were talking about the initial countries we all entered once we fled our own countries. My story began leaving my home country of Somalia and going into the borders of Kenya, and we were processed and we were welcomed. We were given an opportunity to make our case for refugee asylum and eventually got the opportunity to come to the United States. To me, when I look at what is happening in our border, what's happening with the refugee resettlement program, when I look at what's happening with our family reunification program, this is an administration really that isn't interested in making sure that we have an immigration process that is humane. They are truly interested in limiting certain people from coming into this country.

Your congressional colleague Alexandria Ocasio-Cortez is getting a lot of heat, being called anti-Semitic by some, after she called migrant facilities "concentration camps." Do you agree with her description?

When you look at what is taking place, people are being put in camps. And when you think about the definition, if we separate it from death camps, I would say these are camps and people are being concentrated in them. And so that's the general definition. I think a lot of people are conflating what a death camp looks like or a specific removal of people. These people are coming to the border. We are removing them from the border. We are placing them in camps. Some of them are being removed from communities and being put in what we're calling detention centers — but are essentially camps. There has to be a way for us to have this conversation without calling people names and accusing them of things when they are just having a general honest conversation on how detrimental this is.

When you talk about the process of de-humanizing people so that you can exterminate them, there is a process. When you are constantly engaging in the kind of rhetoric this administration has engaged in — when it comes to immigrants and people who are seeking asylum and refugees — we have to be alarmed. It is very worrisome. When we say "never again," that means we have to be vigilant that that doesn't happen under our watch as we stay politically correct and try to find the proper words to use or even worse look the other way.

Going back to World Refugee Day, do you think you and your family would have been allowed in the United States today, in these times?

It's a really difficult question, and a sad one to contemplate. I know that as the numbers dwindle every year under this administration, it becomes very hard for a lot of refugees to still have that dream of being relocated into the United States. And I think often about the little Ilhans in refugee camps who are asking their families why it's taking so long for their applications to be processed. I hope that we understand the kind of opportunities we can give to the 8-year-olds who are waiting for a chance to be in a classroom, for a chance to play in a playground, for a chance to really dream about a future of maybe even being in Congress one day.