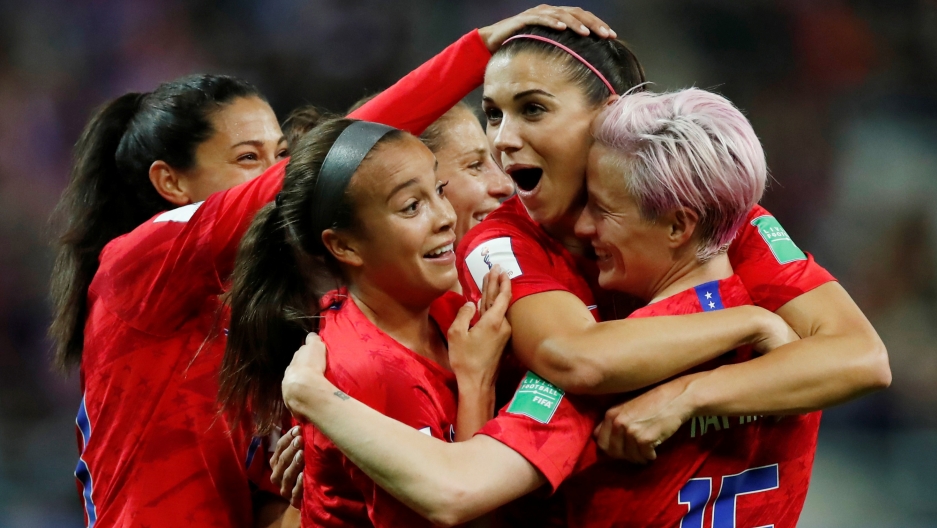 Alex Morgan of the US celebrates scoring their twelfth goal with Megan Rapinoe and teammates during a match of the US versus Thailand at the Women's World Cup in Reims, France, on June 11, 2019.

The story of the 2019 US women’s national soccer team is not yet written, but its opening chapter — a 13-0 drubbing of Thailand — has inspired American fans hoping for a championship repeat.

The US women’s soccer team has long been the envy of the world. And yet, thanks to a scheduling “oversight,” should the squad make the Women’s World Cup final on July 7, they’ll have to compete for viewers with the Copa América and Gold Cup finals, which will be held on the same day.

To me, this scheduling “oversight” is just a microcosm of the way women are treated in the world of sports. And it isn’t just relegated to the playing field.

In my new book, “The Power of Sports,” I draw upon dozens of interviews to look at the barriers female athletes and journalists face.

It’s worse than you think.

Lack of interest or lack of coverage?

Almost every single survey of sports media over the years — irrespective of the sport or outlet — finds female athletics wildly underrepresented relative to men’s.

For example, one 25-year-long study showed that local news outlets spend only 3% of their airtime covering women’s sports, with ESPN allocating a mere 2% of its coverage.

Not until the 1990s did women’s sports begin receiving — barely — more attention than sports involving horses and dogs. Of course, that didn’t prevent Serena Williams’ 2015 selection as Sports Illustrated’s “Sportsperson of the Year” from igniting a debate over whether Triple Crown thoroughbred American Pharaoh deserved the honor instead.

The typical rebuttal to the lack of coverage is an alleged lack of interest.

Related: Women's World Cup kicks off in France, but you'd barely know it in Paris

But this obscures the circular logic that bedevils women’s sports: The way in which sports-media outlets market and cover games partly determines how much fan interest they’re able to gin up. In other words, ratings are often generated by hyping the games. When ratings go up, it justifies the use of those resources.

So when a WNBA game gets punted to an obscure cable channel and has a low production value, it sends a message about priorities to audiences.

Networks like to claim they’re just responding to market forces when they ignore these games. But it’s never been a level playing field: Women’s sports rarely receive the media attention lavished on men’s, so the comparison seems unfair.

When I asked ESPN’s executive vice president for programming and production about this problem, he shrugged. “Any media entity,” he said, “tend[s] to focus the majority of [its] coverage on the topics that are most interesting to your viewers, right?”

In other words, ESPN claims to be amoral on questions of gender equality. Its obligation is to simply give the audience what it thinks it wants.

All men, all the time

More than 90% of anchors, commentators and editors are men. Not until 2017 did a woman announce a men’s March Madness or Monday Night Football game.

Might this color the way female athletes are portrayed? One 2013 review highlighted some notable disparities. When talking and writing about female athletes, commentators tend to focus more on their emotions. They tend to downplay their physical prowess on the field and sexualize their bodies off the field.

Conditions aren’t much better for women working in the media.

Lesley Visser was a sportscaster across multiple networks for four decades. In the late 1970s, as a young reporter for The Boston Globe, she received — and ignored — a media credential stipulation that forbade “women or children in the press box.”

She assumed that waves of women would have followed her lead. But she can’t believe how little progress has been made.

“I go to the NFC Championship, and in the press box there are maybe three women out of 2,000 credentials,” she told me. “I think we’re at the same percentage as in the 1980s.”

Related: As a woman in media, sexual harassment was the norm. I was told to keep it to myself.

The few that do break through can expect to be targeted on social media.

“I still get tweets to go back in the kitchen,” Tina Cervasio, a sports reporter for Fox’s New York affiliate, told me. “They’re worried about color of hair and how a woman looks. … If I was as fat and bald as [some male sportscasters], I would not have that job.”

Kim Jones of the NFL Network concurred. “I’ve gotten tweets that the only reason I have a job is because of my looks; I’ve also gotten plenty more tweets that, you know, I’m an unattractive reporter who shouldn’t be on television.”

This highlights the double bind that female sports journalists face: They feel the pressure to look good for the cameras. But then they’re also denigrated by some who say they only have their jobs because of that attractiveness. It’s tough to imagine a handsome male sportscaster having the same charge leveled against him.

And when mistakes get made — as any human is liable to do — the female sports reporter feels like she’s given less leeway than her male counterpart because he doesn’t have to prove that he really belongs there.

As former ESPN anchor Jemele Hill explained to me, whenever she makes an honest error, “The immediate reaction from a still-too-large segment of the public is going to be, ‘That’s why women shouldn’t talk sports.’ Even though most guys that are in [my] position probably would make a similar mistake, but it’s never going to be about their competence. It’s never going to be about their gender, where it will be for me.” 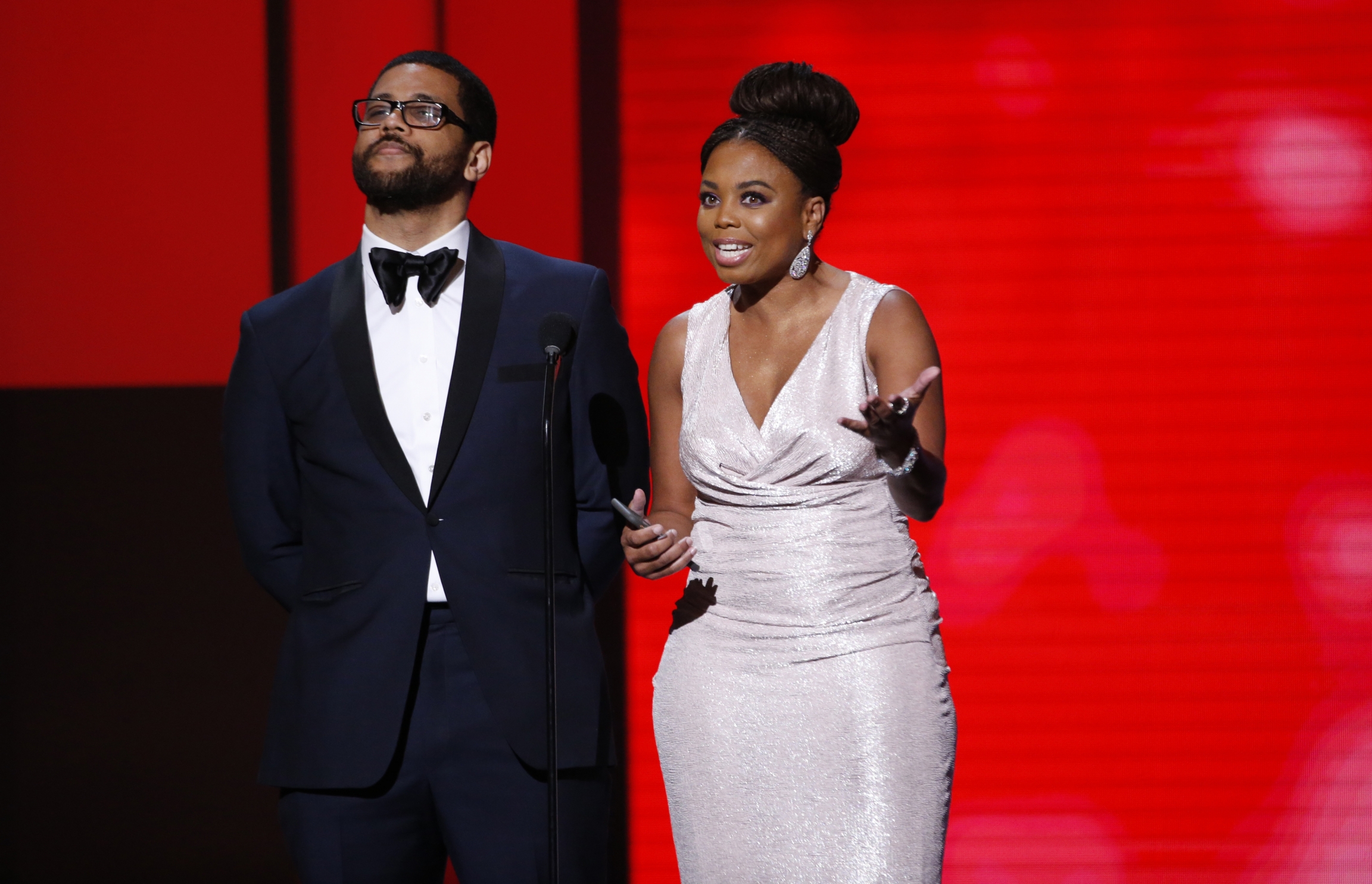 In 2016, an award-winning public service announcement featured male fans reading actual tweets that had been directed at prominent female sportscasters.

“I hope you get raped again,” one read. Another: “One of the players should beat you to death with their hockey stick like the whore you are.”

One of those targeted on social media, Chicago sports talk radio host Julie DiCaro, weighed in poignantly this past April.

“It always seems to come down to this idea that men have a proprietary interest in sports that women don’t have,” she told The Chicago Tribune. “As if we aren’t the daughters of Title IX. As if some of my earliest memories aren’t sitting on my dad’s lap watching the Bears and Cubs. … Sports belong to all of us.”

They should. They just don’t — yet.

Michael Serazio is an associate professor of communication at Boston College.