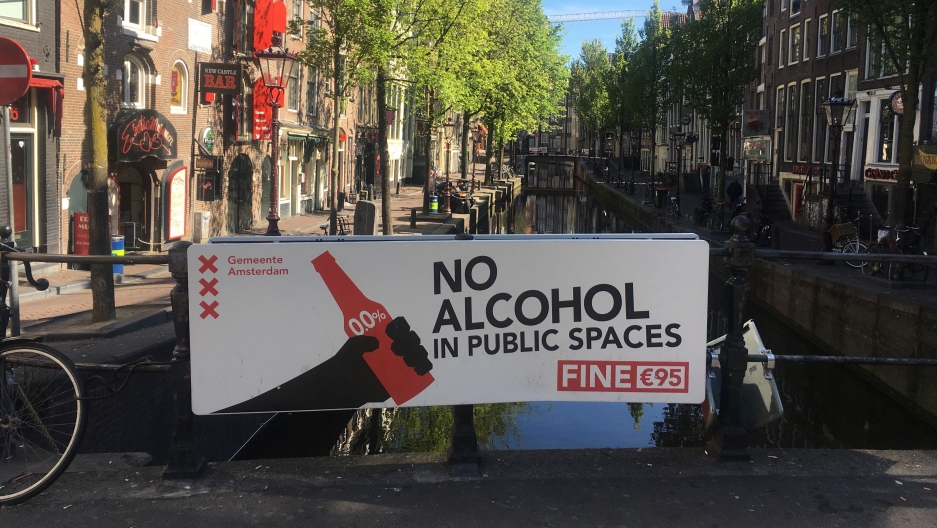 Because of boorish behavior from tourists, Amsterdam city officials have taken to draping banners across bridges in the city center imploring visitors not to drink alcohol or urinate on the streets.

Amsterdam, famed for its picturesque canals, Anne Frank museum and Vincent Van Gogh art collection, is facing a challenge many cities can only dream of.

The Dutch capital, with its tolerant attitude to drugs and prostitution, is such a tourist draw that the city is now openly encouraging visitors to go elsewhere.

It’s estimated over 19 million tourists visited Amsterdam last year. Residents of the city of 850,000 say overtourism has made parts of the city unbearable.

Related: Where people are paid full-time, with benefits, to fish for bikes

The city council is taking measures to combat visitor numbers, including doubling the hotel tax, preventing new tourist shops from opening and, starting next year, banning tours of the renowned red-light district.

For Bert Nap, who has lived in the heart of the city for four decades, the measures are merely a start. Nap’s house stands just one canal away from the red-light district, locally known as De Wallen. At times he feels like a prisoner in his own home.

Related: Amsterdam is tackling loneliness one dance party at a time

“I like to go out on Monday mornings because it’s still my city. But when you come here Friday nights, or Saturdays, it’s a completely different story. You can’t go outside of your house because you’re blocked by scores of tourists.”

It’s not just the number of tourists that is the issue, according to Nap.

"As soon as they are happily drunk, they start puking in our potted plants and pissing against our houses."

“Mostly these people come in in the afternoon and start drinking. As soon as they are happily drunk, they start puking in our potted plants and pissing against our houses. And screaming."

City administrators are trying to tackle the behavior. Banners draped across bridges in central Amsterdam warn people not to drink alcohol or urinate on the streets. Pavements in the red-light district carry signs appealing to tourists not to film the sex workers. District governor Mascha ten Bruggencate recognizes the signs are far from subtle. 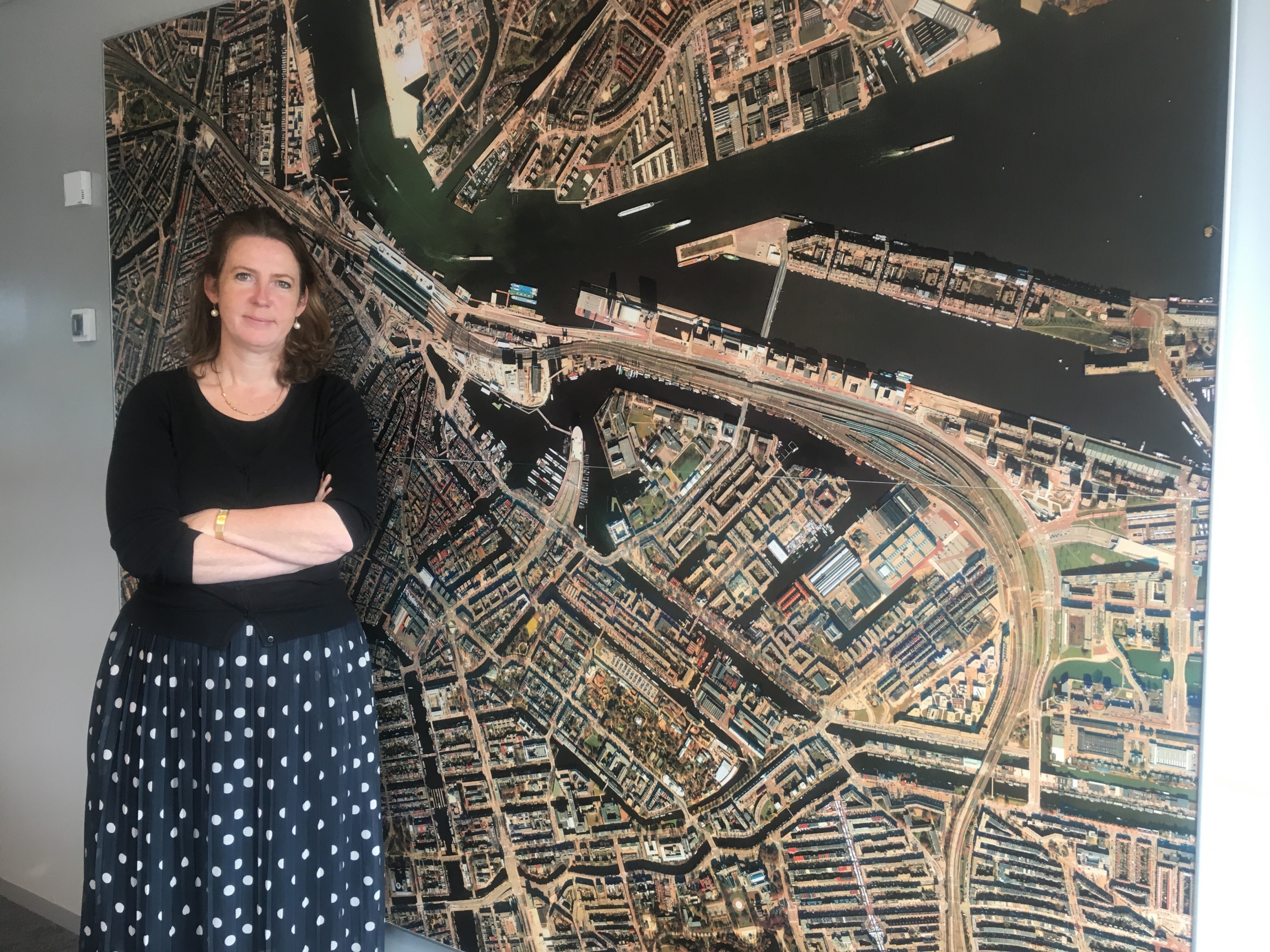 Mascha ten Bruggencate, district governor with the city of Amsterdam, thinks visitors need a gentle reminder of how to behave in her city.

“It seems like a very basic way of behaving, to use these signs. But we have to tell people. Because a lot of visitors seem to think that anything goes in Amsterdam.”

Much of the problem centers around the red-light district and it’s one of the reasons the city is banning tours of the area starting next January. The city consulted with some sex workers who said they didn’t like groups of tourists standing outside their windows. “They told us the tours prevented potential customers from coming in,” ten Bruggencate says.

Unsurprisingly, Elard Tissot van Patot, organizer of Amsterdam Red Light District Tour, disagrees. He claims the tours actually help to regulate behavior. His guides issue instructions at the start of each tour warning tourists not to take photos of the sex workers or stop and stare in the windows. 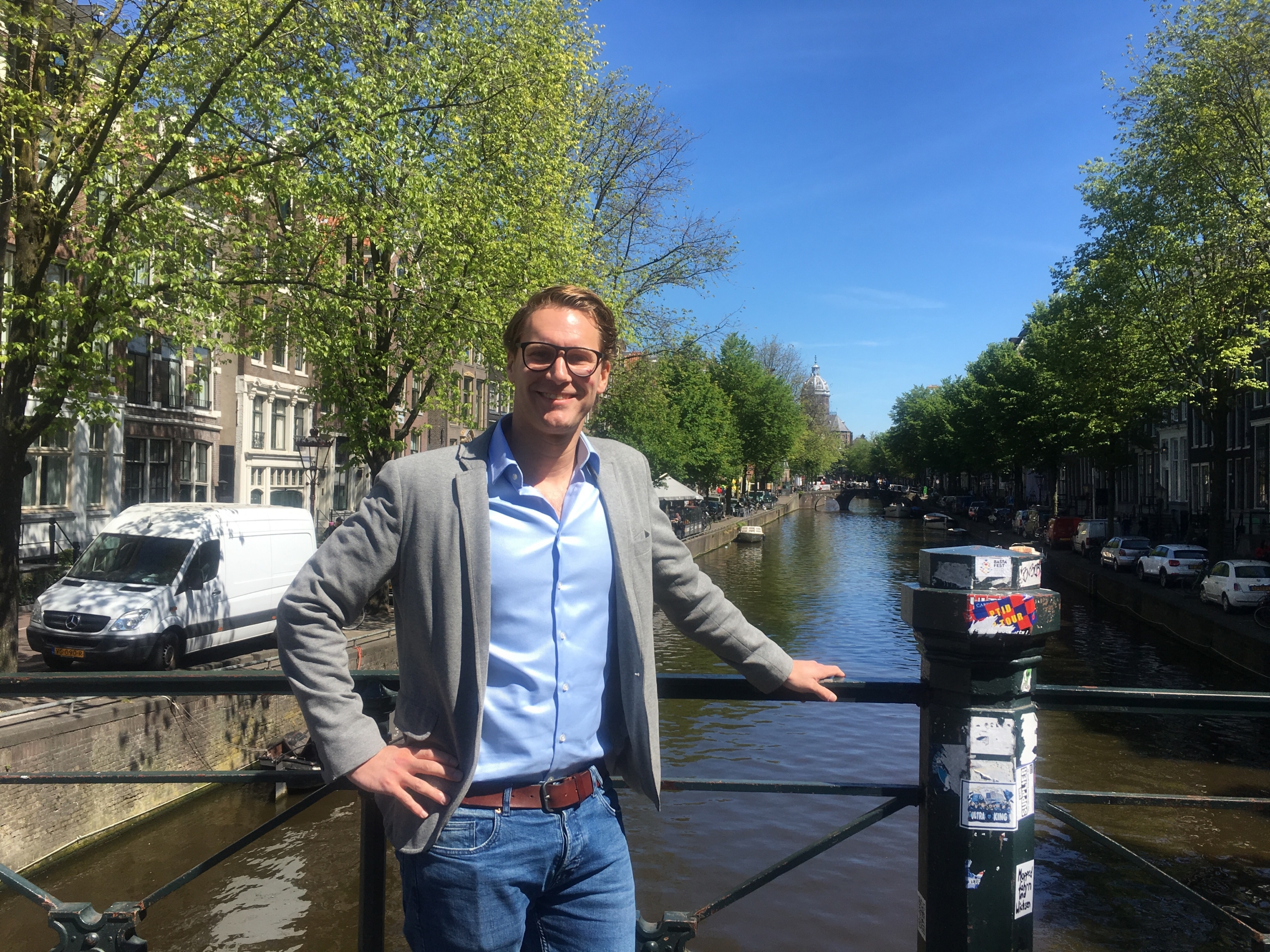 Elard Tissot van Patot is the founder of the Amsterdam Red Light District Tour. He claims the tours actually help to regulate behavior.

Tissot van Patot claims the council only consulted with a small number of sex workers and argues that there are many who are opposed to the upcoming ban.

Talia works in a strip club in the red-light district. She asked not to use her real name as not everyone knows her occupation. A spokesperson for Proud, the Dutch union for sex workers, she is also unhappy with the measures being taken by the city of Amsterdam.

“I think they’re killing the soul of Amsterdam. I know a lot of women who work behind the windows and they actually don’t really mind [the tours]. I don’t think they’re really thinking about this subject. I think it’s on their minds to make money.”

Talia grew up with sex workers. Her family is originally from Colombia and she has worked in clubs in a number of European cities. Talia says she feels safe in Amsterdam, much safer than she has felt elsewhere. Women like her are dependent on the tourists to make a living, she says.

Related: A Dutch brothel where women work for themselves

There is also a broader philosophical question facing the city. Amsterdam has built a reputation as an open-minded place, with a long-held liberal attitude toward drug use and sex. Cracking down on visitor behavior seems a direct contradiction to that, and the council admits it’s a dilemma with which it struggles. Deputy Mayor Udo Kock said recently it was no longer appropriate to see sex workers as a tourist attraction. Mascha ten Bruggencate agrees. She is reticent about having to introduce rules about behavior, but believes some visitors need a gentle reminder.

“We can hardly forbid things. But a lot of people wouldn’t dress as a penis at home, so then don’t be dressed as a penis here.”

“We can hardly forbid things. But a lot of people wouldn’t dress as a penis at home, so then don’t be dressed as a penis here,” she says.

Amsterdam was the first European city to introduce a “night mayor.” The aim was to help grow the nighttime economy of the city while working with local officials and residents to control after-dark behavior. Ramon De Lima, chairman of the Night Mayor Foundation of Amsterdam, has no issue with the bachelor parties that descend every weekend, but wishes tourists would explore areas outside of central Amsterdam and the red-light district. He agrees with Udo Kock that sex work as a tourist attraction is inappropriate. 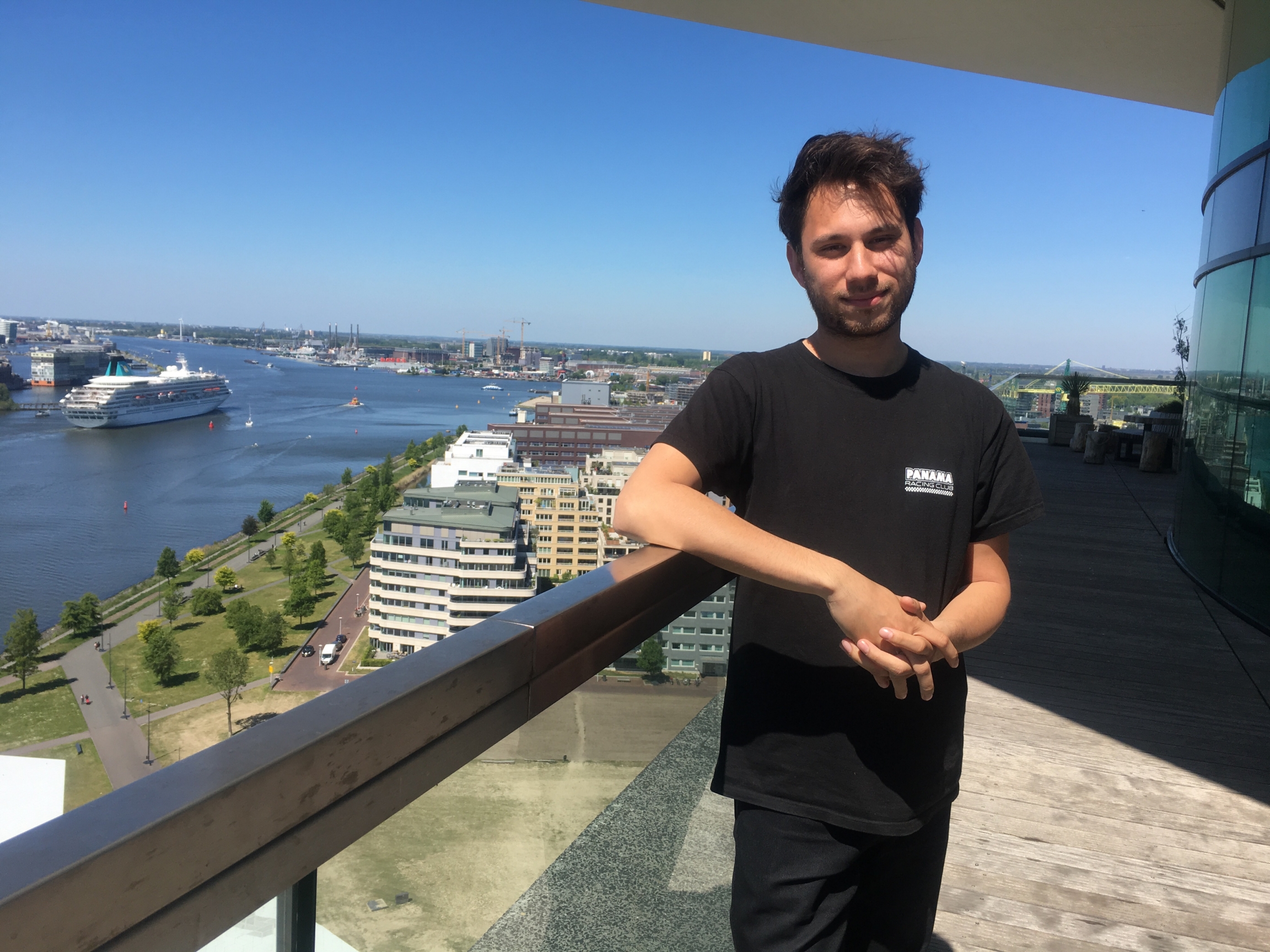 Ramon de Lima, the chairman of the Night Mayor Foundation of Amsterdam, has no issue with the bachelor parties that descend every weekend, but wishes tourists would explore areas outside of central Amsterdam and the red-light district. He also feels that sex work as a tourist attraction is inappropriate.

“I don’t have anything against prostitution, but I think the women behind the windows is something not from this time. I see all these groups of tourists wandering around the red-light district looking at these women like they are animals. I think giving tours through that area is not something to be proud of.”

The Amsterdam Red Light District Tour office is located in the center of the red-light district, alongside the world’s first condom shop. Hordes of tourists pause outside the condom shop to take selfies. Elard Tissot van Patot lives in the south of the city. Although he wants the tours to continue, he admits he wouldn’t live here. 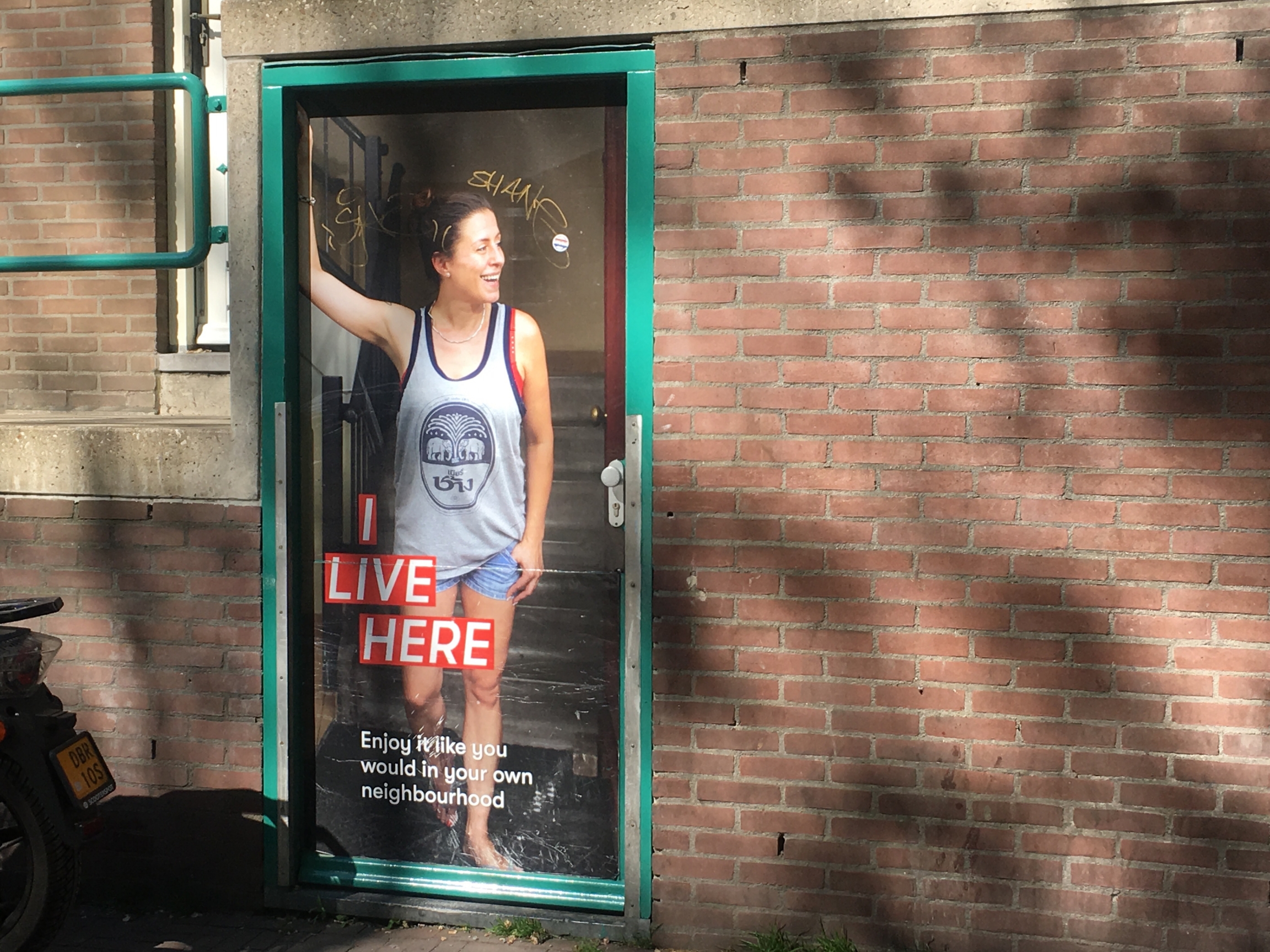 A campaign in Amsterdam aims to remind visitors to the city that there are full-time residents who live there too — and they don't appreciate drunken shenanigans.

“It’s fun to work here. It’s fun to have my office here. But sometimes it’s so alive. When I’m looking for some quietness, it’s difficult to find it in the red-light district. If you’re looking for quietness, this is not the place to go to.”

Tissot van Patot already has plans in place to deal with the upcoming ban. He’s organizing more diverse historical tours of the city and recently developed an app to allow tourists to conduct their own audio tour of the red-light district.

Long-time resident Bert Nap is just hoping that the city’s new measures will one day guarantee him a full night’s sleep. He makes an appeal to visitors thinking about coming to his hometown.

“Please tourist, you’re welcome here. But understand that people live in these houses that you’re walking by.

So when you’re screaming at night, I wake up.”