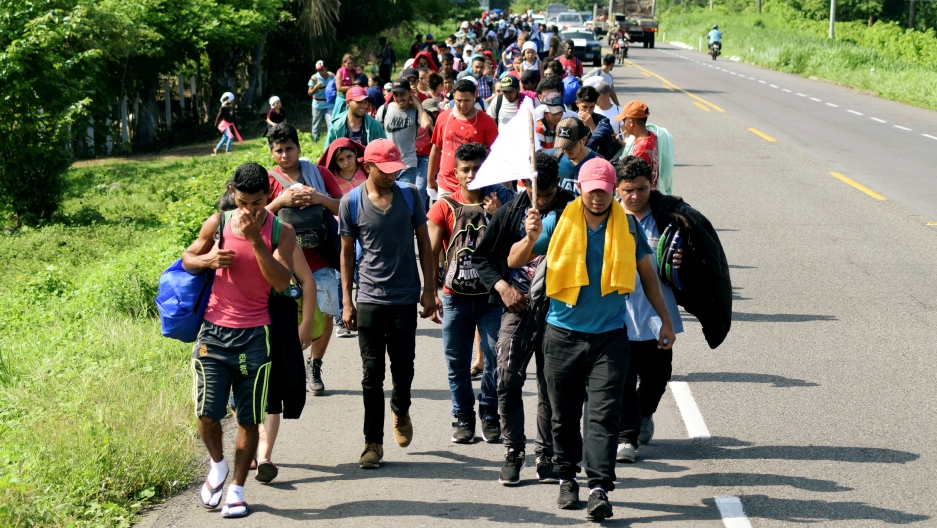 Migrants from Central America walk on a highway during their journey towards the United States, in Ciudad Hidalgo, Chiapas, Mexico, on June 5, 2019.

When a caravan of roughly 8,000 migrants passed through Tapachula, Mexico, last October, residents lined the highways giving out food and water. The migrants were neighbors, after all, and the Christian thing to do was help.

But the caravans kept coming — none as big, but more frequently. They can in groups of between 500 and 2,000. Mexicans’ perception of the migrants began to change: Yes, they needed help, but they were pushy, and some were criminals.

“There is not space for them. We don’t have enough resources to support them.”

“Now, there are more of them, and they are staying here to wait for a [Mexican] visa,” said Marta Forsale, a restaurant owner in Tapachula who offered free meals to the migrants, along with other members of her church. “There is not space for them. We don’t have enough resources to support them.”

In the past few months — and especially recent weeks — Mexico has seen a shift in public attitude toward migrants: Rising resentment is replacing tolerance in a country that is both deeply religious and has a long history of sending its own citizens to the US. But even though nearly every Mexican has a family member or friend living north of the border, Mexicans are becoming increasingly wary of Central American migrants. That’s partially because they tend to be poor and lack jobs, but also because their sustained high rate of migration is jeopardizing US-Mexico relations — which in turn is threatening the Mexican economy. 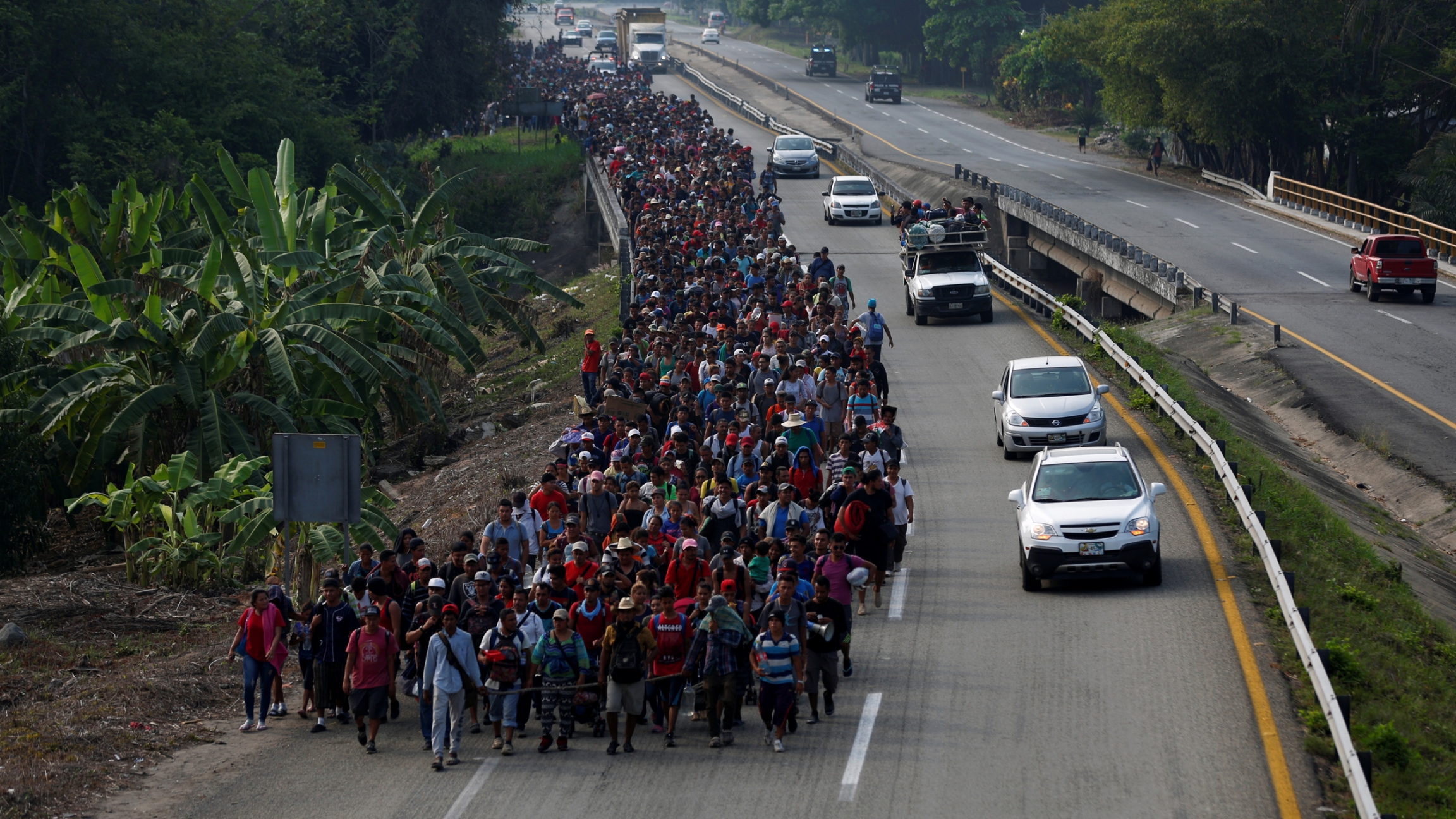 Central American migrants walk on a road in Villa Comaltitlan, Mexico, during their journey towards the United States in April 2019. Many such organized groups have traveled from Central America through Mexico in the last year.

President Donald Trump’s recent threat to impose a 5 percent tax on all Mexican imports underscored just how much was at stake. But already, the fallout from the wave of Central American migrants is being felt in US-Mexico border cities such as Ciudad Juarez, where the wait times to cross into the US now last for hours — both by foot and by car.

Related: Trump defies own party to push ahead with Mexican tariff threat

“We shouldn’t have to suffer this line,” said Rosa López, a Mexican citizen, as she waiting on the bridge to cross from Ciudad Juarez into El Paso, Texas. She lives on the Mexican side of the border and works in El Paso cleaning hotels.

“Before, the line was always easy and fast,” she added. 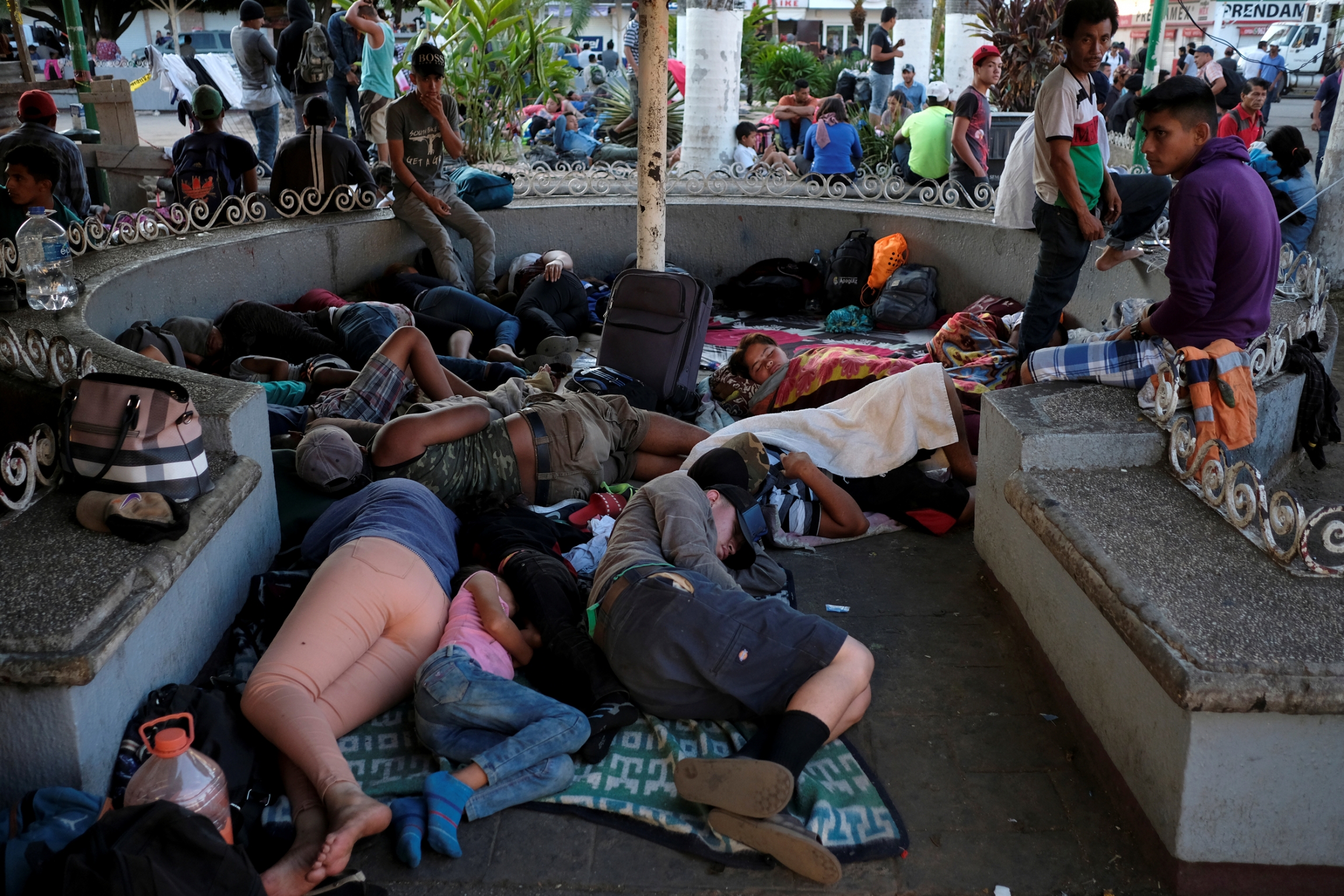 People belonging to a large group of migrants from Honduras en route to the US sleep at the Miguel Hidalgo Central Park in Tapachula, Mexico, on April 14, 2019.

López, like others, partially blames the migrants — and also Trump, who has transferred immigration agents away from the official ports of entry to deal with wave of asylum seekers reaching the US. In May, US Border Patrol agents encountered more than 144,000 undocumented migrants at the southern border. Most of them sought to turn themselves in and request asylum.

Mexican President Andrés Manuel López Obrador, who took office last year, campaigned on promises of better treatment for migrants. His government has issued thousands of “humanitarian visas,” which have allowed Central Americans to work and traverse the country legally. But facing criticism and pressure from Trump, López Obrador’s government is cracking down by cutting the humanitarian visas, increasing deportations, and agreeing to host Central American migrants sent back to Mexico under the US “Migrant Protection Protocols,” better known as “Remain in Mexico.” 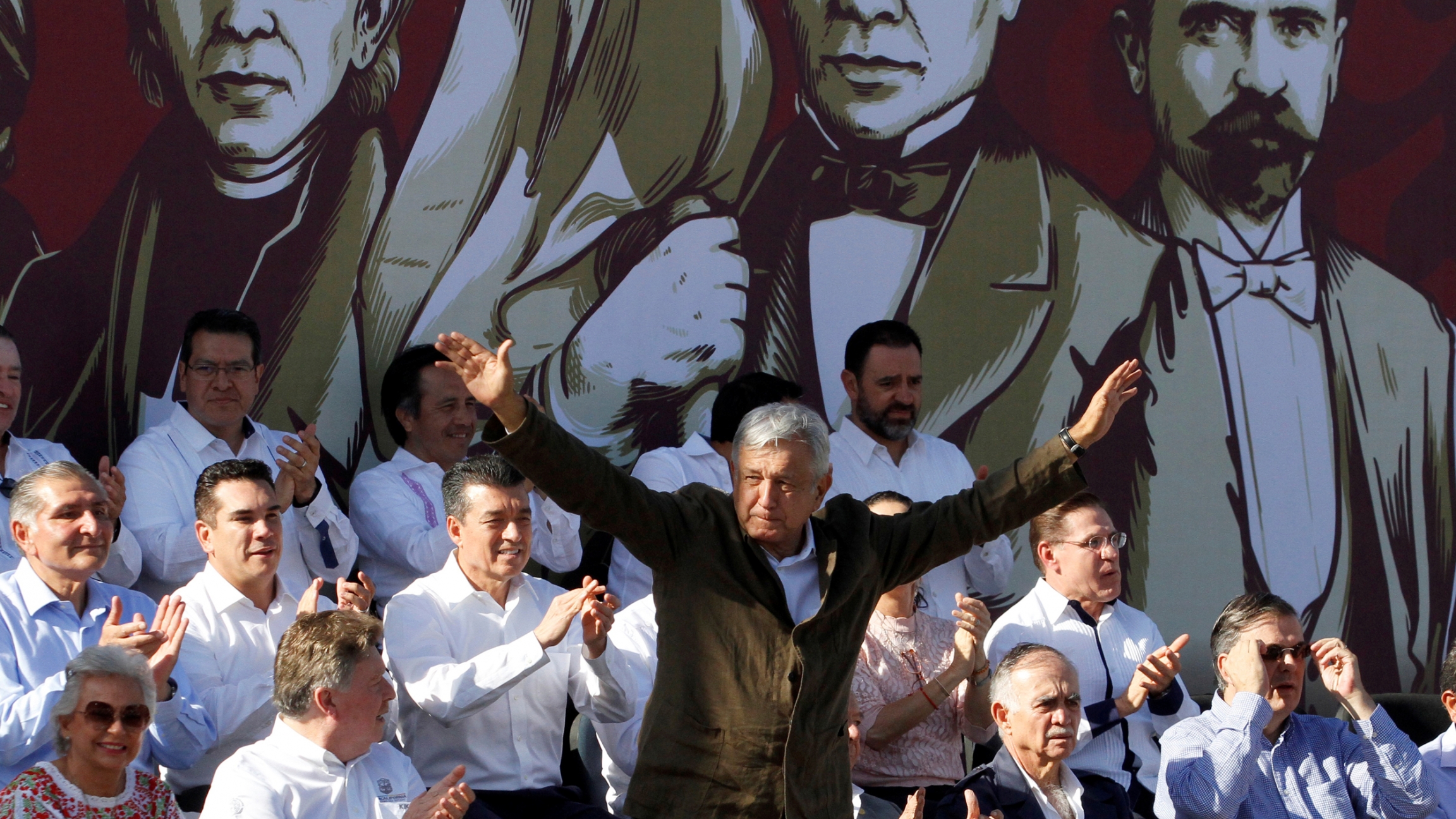 Mexico's President Andrés Manuel López Obrador takes part on a "unity" rally to defend the dignity of Mexico and talks about the trade negotiations with the US in Tijuana, Mexico, on June 8, 2019. His popularity is still high and most in Mexico approve of how he's handled Trump's tariff threats.

Julia Fuentes, a dual American-Mexican citizen who splits her time between El Paso and Ciudad Juarez, blamed the Central American migrants for long delays in processing visa applications. Her Mexican husband has applied for US residency and has been waiting for that 15 months. She expects it will take another year.

“All of the immigrants that are coming, they are making things worse,” she said. “The paperwork for my husband shouldn’t be taking so long, and it is because they are processing those immigrants first.”

Mexican’s attitude shift toward Central American migrants arguably began with the caravans, said Andrew Selee, president of the Migration Policy Institute in Washington, DC. Images circulated in the media of migrants forcing themselves into Mexico at the Guatemalan border and of thousands of migrants marching through the streets in their trek to the US.

“The caravans of Central Americans really created the sense of a breakdown of law and order. And that — as it has in other parts of the world before — tends to be a kind of trigger that turns people against large migration flows.”

“The caravans of Central Americans really created the sense of a breakdown of law and order. And that — as it has in other parts of the world before — tends to be a kind of trigger that turns people against large migration flows,” Selee said.

That’s what Julia Garcia, a housekeeper in Mexico City, had on her mind.

“It’s better to show that they really need help and wait their turn,” she said. “They should follow the rules.”

Garcia’s own son lives in the United States without documentation. He is one of around 11.3 million Mexicans living in the US, about 6 million of whom are undocumented, according to the Migration Policy Institute.

Garcia said if the Central American migrants want to work and get ahead, they should be allowed into Mexico. She said she had faith that the Mexican government would know who really merited it. 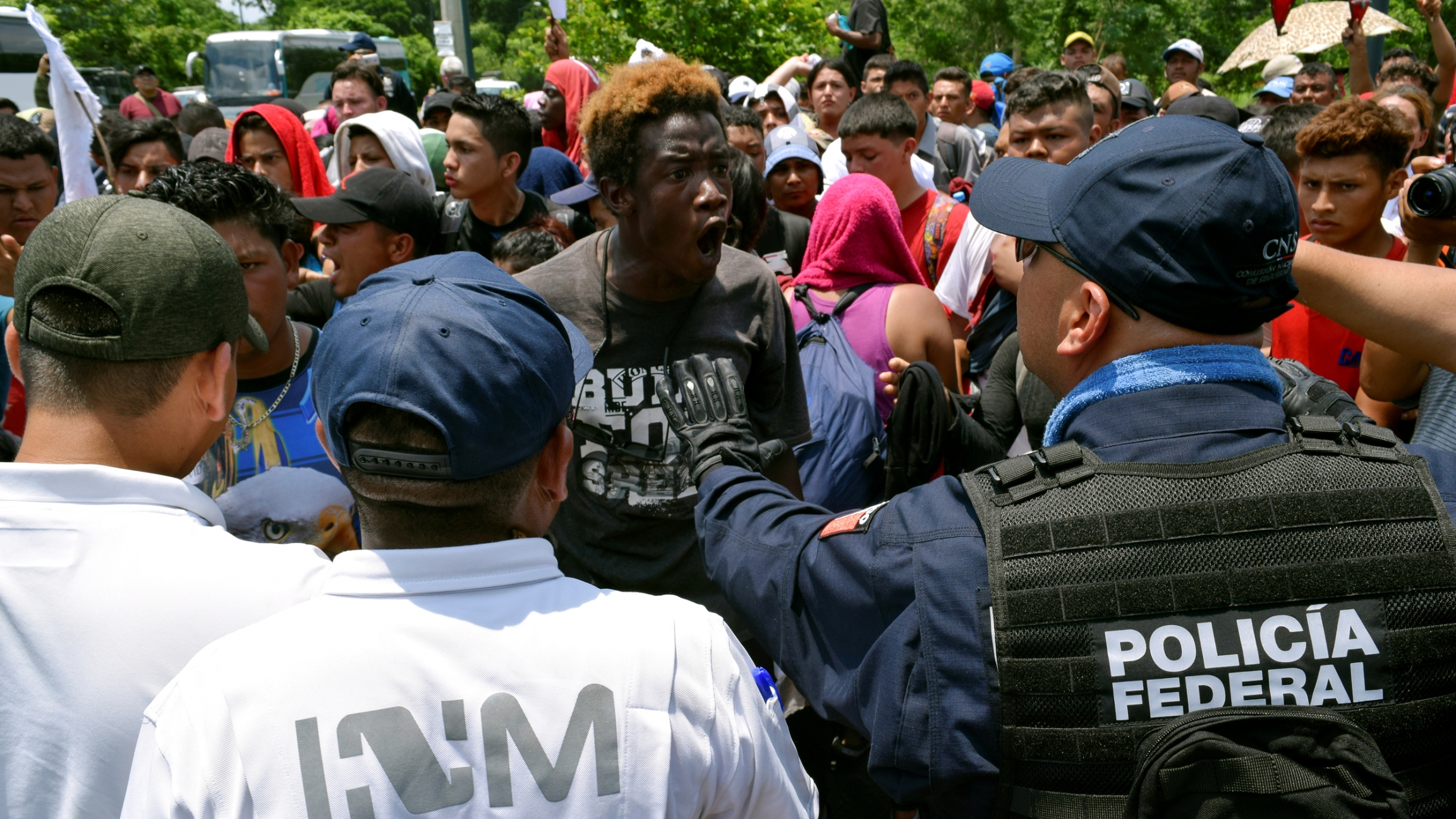 A migrant argues with a federal police officer during a joint operation by the Mexican government to stop a group of Central American migrants on their way to the US, at Metapa de Dominguez, Chiapas, on June 5, 2019.

But for now, the Mexican government is cracking down on Central American migrants in an effort to appease Trump and stave off the threat of a trade war. Mexico’s newly created National Guard is expected to arrive along the Guatemala-Mexico border in the coming days, in an effort to halt the migrants’ passage.

López Obrador is selling the deal with Trump as a political victory. And so far, the deal has played if not great, at least relatively well with the Mexican electorate. Recent polls show his approval rating at 72%, down from 79.4% in March.

But Gustavo Mohar, a former migration undersecretary in the Mexican government, said it was a bad deal for Mexico. He says the country doesn’t appear to be getting anything concrete in return for essentially becoming the United States’ migration enforcement arm.

“This is a tough lesson for the Mexican government, and I personally think that this event should make Mexico reconsider the way that they are going to be dealing with the Trump administration, because this was a very asymmetric position that the US took,” he said.