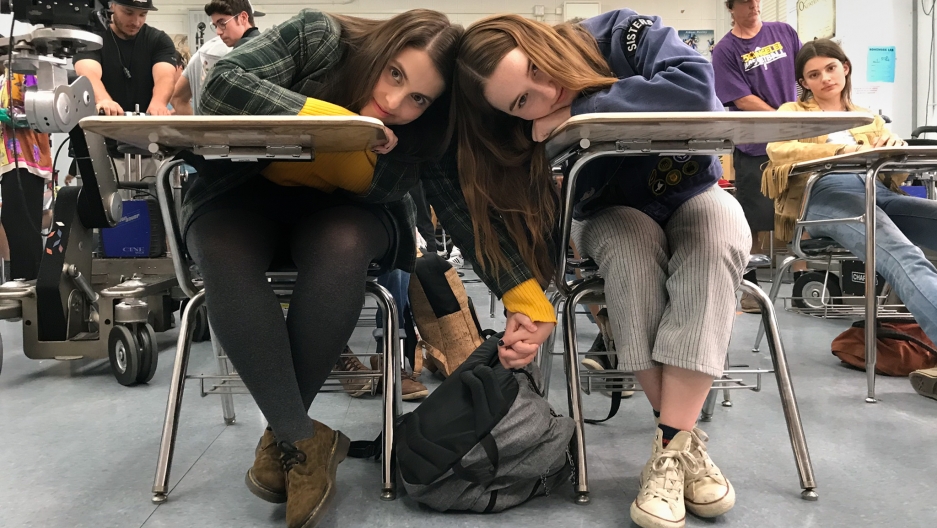 Beanie Feldstein and Kaitlyn Dever on the set of "Booksmart."

The end of high school romp is a movie genre that includes comedies like “American Graffiti” from the 1970s, “Dazed and Confused” from the 1990s and “Superbad” from the aughts.

They’re movies that follow a certain template: There’s a mega-party to be had and it’s a wild, wacky, booze-fueled odyssey to get there.

“Booksmart” is a new movie directed by Olivia Wilde, about two smart young women, Molly and Amy, who are best friends finishing at the top of their class because they spent high school doing homework and volunteering instead of partying so they could get into good colleges. Only to realize that their hard-partying classmates also got into those same good schools. Cue the wild, wacky, booze-fueled odyssey to get to the mega-party.

But the depiction of the two girls and their friendship is not generic, but specific, and fresh, and believable. The stars, Beanie Feldstein (“Lady Bird”) and Kaitlyn Dever (“Justified”), talk with Kurt Andersen about stereotypes, role models, and how they decided to become roommates before shooting the film and actually became friends before portraying them.

They also share their favorite on-screen friendships that inspired the enchanting bond between their characters.

“This movie was never ever for two boys,” Kaitlyn Dever says. “It was always in the female voice and these characters are so, so strong.”