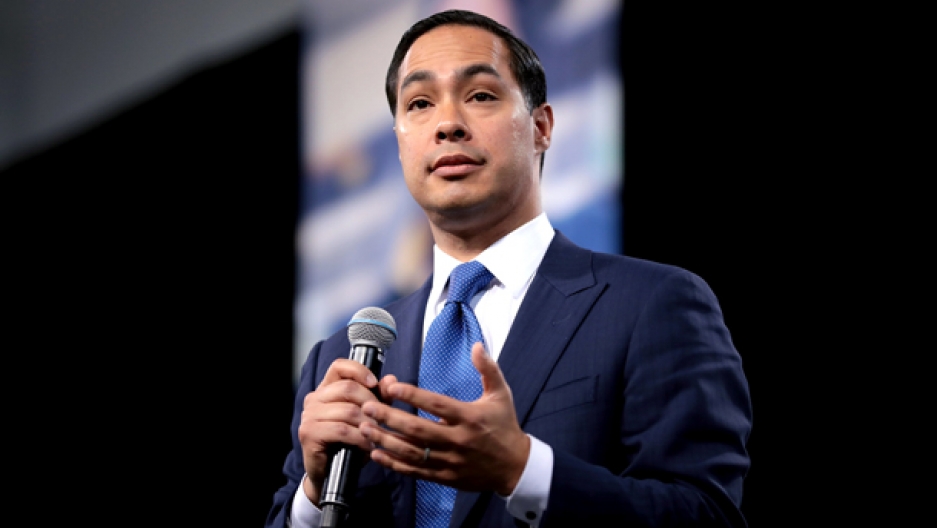 Julián Castro says if he is elected president, he will recommit the United States to the Paris Agreement on climate change and invest in renewable energy.

Julián Castro, a former mayor of San Antonio and secretary of Housing and Urban Development under President Barack Obama, is looking to become the first Hispanic president of the United States. Part of his strategy for winning is to make climate change a major theme of his campaign.

In his search for votes in the New Hampshire primary, Castro stopped by Crackskull’s Bookstore and Coffee House in Newmarket, a popular gathering place for progressives just down the road from the University of New Hampshire. During the meet-and-greet, he laid out his climate agenda and explained why he believes a green economy can be a strong, job-creating economy. He also described to the group how he was tested early on in his public service career on a controversial environmental issue.

As a member of the San Antonio City Council and a lawyer at the city’s biggest law firm, he said, he quickly found himself facing a difficult ethical challenge. A few months after the election, his law firm got a new client. The client wanted to build a golf course over the city water supply and wanted the city council to approve the deal. The city relies on an aquifer for its water, and Castro had concerns that the environmental plan was not strong enough. He feared the golf course might compromise the drinking water because golf courses use chemicals, fertilizers and pesticides to maintain their grounds.

Castro opposed the deal, as did his constituents, but under the professional rules of conduct, lawyers can't act against the interests of a client.

“So, I was stuck,” Castro says. “My constituents were saying, ‘Hey, man, are you going to represent us here? Are you gonna vote against this?’ But my livelihood — I had bought a house, I had bought a new car, my student loans were between $900 and $1,000 a month at that time — depended on me basically shutting up and doing nothing. … So, one day in January of 2002, I walked into the law firm and I quit my job. And then I went and I voted against that land deal on the city council.”

Castro says his first executive order as president would be to recommit the United States to the Paris Climate Accord. But that's the easy part, he said.

“The harder part is, I believe, that we need to invest in a big way in sustainability,” he said. “I like the concept of the Green New Deal, for instance, because I don't think that we have to choose between protecting our planet and creating jobs and opportunity.”

Castro has seen the benefits of the new energy economy in Texas, where wind and solar energy are big business, so he believes the country can do both things.

“There is no reason that China or any other country should beat the United States when it comes to actual jobs as we embrace renewable energy and we do the right thing,” he said. “And I'm absolutely committed to making those investments and going towards zero on carbon emissions.”

When asked by a young man working as a barista in the coffee shop whether he would refuse campaign money from fossil fuel companies, Castro said he would “absolutely” take that pledge. In fact, Castro has said he will not accept any money from any political action committees (PACs).

The New Hampshire voters Castro spoke with seemed to like his fresh face, his folksy — rather than fiery — style that speaks of integrity, and his brown, black and white campaign that reflects the diversity of today’s American electorate.

He has yet to raise as much money as some of the other presidential contenders, but he has enough donors and early polling results to qualify for the first televised debates in June. That means he still has a chance for his campaign to catch on.