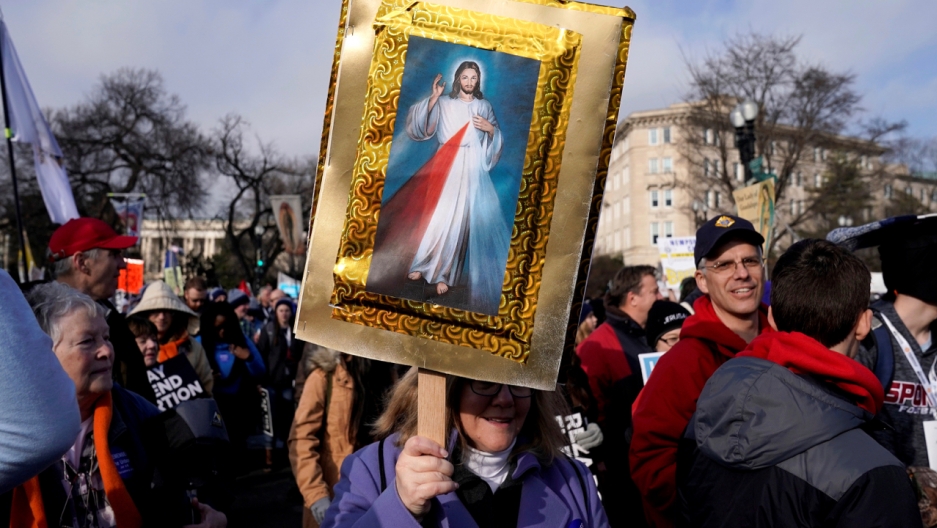 An anti-abortion marcher carries a picture of Jesus Christ during a rally at the Supreme Court during the 46th annual “March for Life” in Washington, DC, on January 18, 2019.

The Republican governor of Alabama, Kay Ivey, made it clear that religious belief was a big part of her decision to sign legislation that would ban abortion in almost all cases.

Ivey appeared to be pointing to the belief held by many conservative Christians that human life begins at conception and that abortion is wrong. Full stop.

Related: Legal abortions in Argentina remain elusive for most vulnerable

Sister Agatha Munyanyi, a Catholic missionary from Zimbabwe living at a convent in West Virginia, shares that view. Speaking to The World at the 2018 Right to Life march in Washington, DC, in January, Munyanyi said that abortion is a controversial issue in Africa, too, where she grew up.

“In my country in Zimbabwe, it’s illegal,” Munyanyi said. “You are actually sent to prison for doing that.”

“It’s good because we have no right to terminate life at any stage,” she said.

But some Christians in the US are struggling to find a place to stand along the deep political divide over abortion.

“I do believe that life begins at conception,” says Kirsten Powers, author and co-host of the Faith Angle podcast. Powers is Catholic and has always thought of herself as solidly pro-life.

But in recent years, Powers says she has come around to think about abortion differently. Now, she says she is both pro-life and pro-choice.

“I have a lot of friends who’ve had abortions, and I’ve supported them. I don’t judge them. I think it’s a difficult issue and it requires a lot of humility,” Powers says.

“We’re not, thank God, a theocracy. We are a secular, pluralistic country with a lot of people who believe a lot of different things.”

“We’re not, thank God, a theocracy," she says. "We are a secular, pluralistic country with a lot of people who believe a lot of different things.”

Powers says people with one set of deeply held beliefs should not impose those beliefs on others.

Related: Abortion is legal in Italy, but most doctors refuse to do it

In the Jewish tradition, there is a range of views on abortion. But questions surrounding this issue, such as when life begins, go way back in Jewish history.

“There’s nothing new under the sun, as we say in Judaism,” says Orthodox Rabbi Lila Kagedan, who is based at a synagogue outside of Boston, Massachusetts. “This is a conversation that has occupied the minds of rabbis, thinkers and scholars since the time of the Talmud.”

Kagedan says the Talmud, which is the primary source of Jewish law, describes three stages at the beginning of human life, starting with conception. This is the moment that the soul comes into the world.

Related: As access to abortion gets harder, women turn to an online service

“But the soul is seen as potential,” Kagedan says. “At that stage, the fetus is called maya b’alma. It’s mere matter or watery mere matter.”

The second stage begins 40 days after conception and this is when the fetus is considered to be a human being. “But the mother’s life takes precedence over the fetus’ life,” Kagedan says. “That can include abortion if there’s a threat to the mother.”

“We prioritize the personhood of the mother, in many ways, because the fetus is not yet seen as a fully formed human being."

“We prioritize the personhood of the mother, in many ways, because the fetus is not yet seen as a fully formed human being,” she says.

The third stage is critically important, Kagedan says, and this is the birth of the baby.

“The act of birth itself changes the status of the fetus from a non-person, this watery matter, to a person or a nefesh, a person with a soul.”

Kagedan says the issue of abortion is still being debated by Jewish leaders and it is not a settled matter.

“There isn’t one party line on this issue,” she says.

The same goes for Islam. Most Muslim leaders agree, however, about when life begins.

In Islam, children are seen as a blessing, but procreation is not mandatory. Contraception is permitted. Family planning is encouraged.

On abortion, some Muslim scholars come down more firmly against it. But most Islamic thinkers have concluded that there are various legitimate reasons for having an abortion, and the earlier the decision is made, the better.

“The rulings are very nuanced. They take into account the mother’s life, well-being, and other situational factors. It’s not a black or white question."

“The rulings are very nuanced. They take into account the mother’s life, well-being, and other situational factors. It’s not a black or white question,” Ibrahim says.

Muslim scholars have laid out strict prohibitions, however, for abortion after 120 days. That is based on the idea from Islamic scripture that says after four months, angels have breathed a soul into the child in the womb. Though abortion is still permitted after 120 days if the pregnancy threatens the life of the mother.

Of course, there are all sorts of complexity and contradictions in different religious traditions about when life really starts and whether abortion is right or wrong.

Hindus believe that the fetus contains a reborn soul at a very early stage and the scriptures prohibit abortion. But in India, the procedure is legal.

Buddhists from different schools of thought also believe that life begins at conception. But there is disagreement about abortion. Some Buddhist leaders would call it murder. Others, including the Dalai Lama from Tibet, emphasize that abortion is a very personal, difficult decision that comes with a unique set of circumstances.

What do medical ethicists say about when life begins?

“Human life begins when a new human organism is created that is human and not some other species, and it’s alive. ... If it were simply a question of whether or not an embryo or a fetus is a human life, then we wouldn’t have such a dispute. But that’s not what abortion debates are about.”

“Human life begins when a new human organism is created that is human and not some other species, and it’s alive,” says Josephine Johnston, director of research at the Hastings Center, an independent research institute in Garrison, New York.

But questions about when that new human life should be acknowledged and protected, Johnston says, are very different questions.

“If it were simply a question of whether or not an embryo or a fetus is a human life, then we wouldn’t have such a dispute," she says. "But that’s not what abortion debates are about.”

Johnston says there is no way of talking about the unborn in isolation. An embryo or fetus is always linked with at least one more life, and that’s the mother. “You’re always talking about the rights and interests of the pregnant person and in many cases, her family as well,” she says.

As with religious leaders, Johnston says medical ethicists come down on different sides of the abortion debate for different reasons. But when they have looked at the questions of the status of the unborn, they tend to favor a broad consensus.

“Overall, the approach is to understand the human embryo and fetuses as not like property, but also not like fully fledged persons with all of the rights and interests attending persons," she says. "So, somewhere in between.”