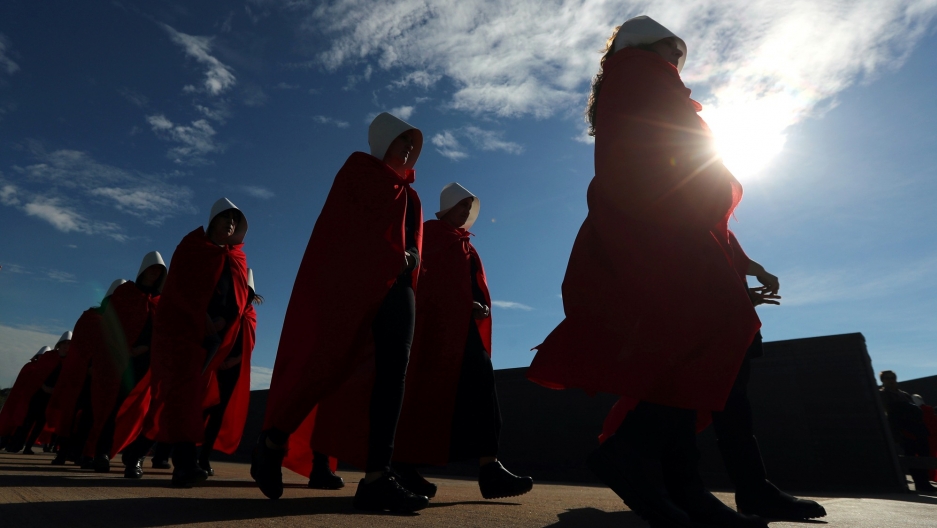 Activists dressed up as characters from "The Handmaid's Tale" take part in a demonstration in favor of legalizing abortion in Buenos Aires, Argentina, on Aug. 5, 2018.

A new symbol of women’s rights is turning up at protests from Latin America to the British Isles and across the US. The scarlet cloak and white bonnet outfit from “The Handmaid’s Tale” is being worn by women rallying for abortion rights and fighting against policies and politicians seeking to restrict those rights.

In Margaret Atwood’s 1985 dystopian novel, the striking red outfit is worn by fertile women forced into childbearing servitude. Recently, the handmaids are seen in Hulu’s Emmy-winning, critically acclaimed series based on Atwood’s book.

But now, the handmaid’s cloak has been most recently worn by protesters in Argentina where the country’s senate recently voted to reject a law that would decriminalize abortion in the first 14 weeks of pregnancy. 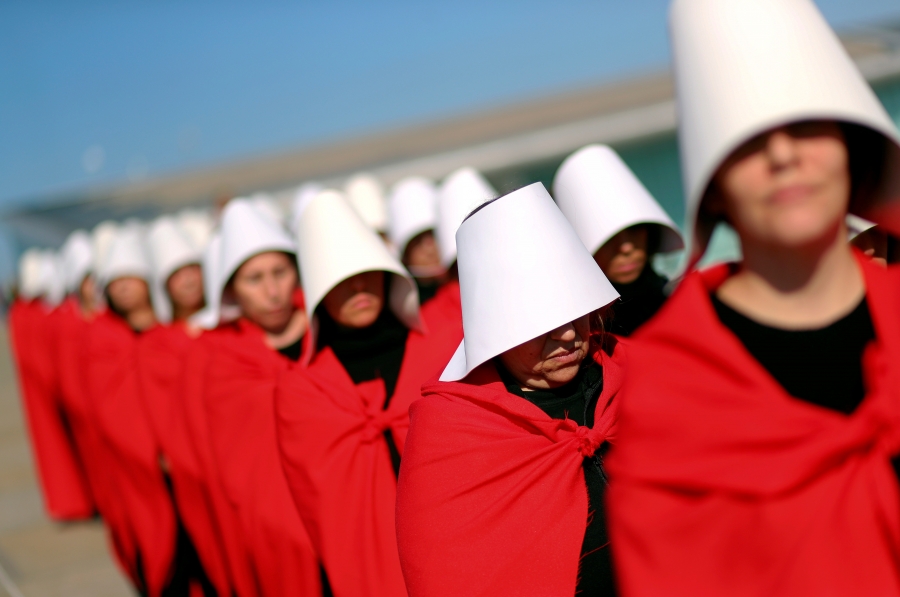 Activists take part in a demonstration in favor of legalizing abortion in Buenos Aires, Argentina.

Abortion is completely legal in only three places in Latin America. Argentina would have become the largest country in Latin America to legalize the procedure in the predominantly Catholic region.

The red cloak was seen on the streets of Dublin during demonstrations ahead of a referendum on abortion law and several protests in the US. 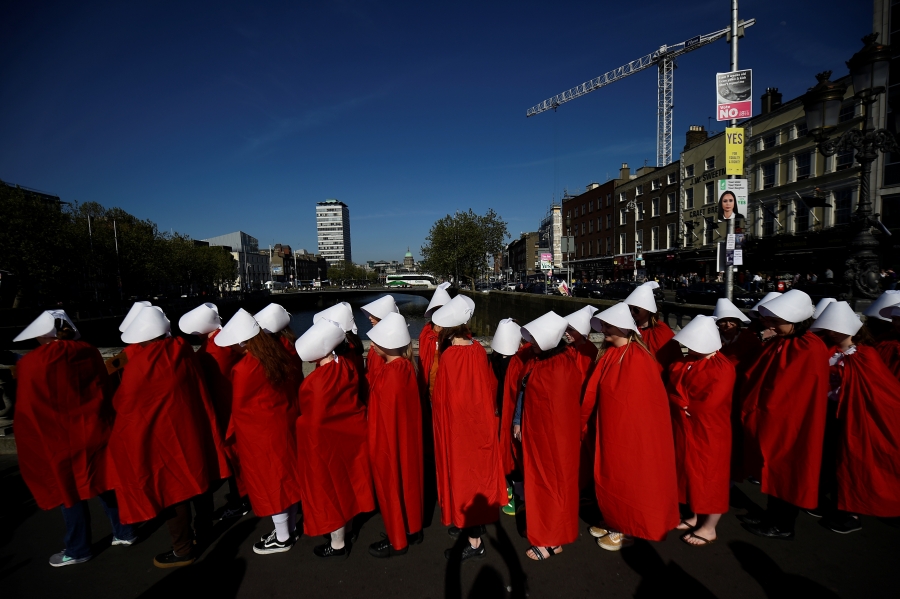 Abortion-rights activists are seen ahead of a referendum on abortion law, in Dublin, Ireland, May 2018.

Just about “everyone seeing these groups of women know what they mean in the context of the individual protest, whether it be Ireland, Argentina, or Arizona,” author Margaret Atwood told The Guardian.

She added: “In countries that prohibit birth control and reproductive health information, the state claims ownership of women’s bodies through enforced childbearing. What the costume is really asking viewers is: do we want to live in a slave state?”

Here’s a selection of photographs with the handmaid protesters. 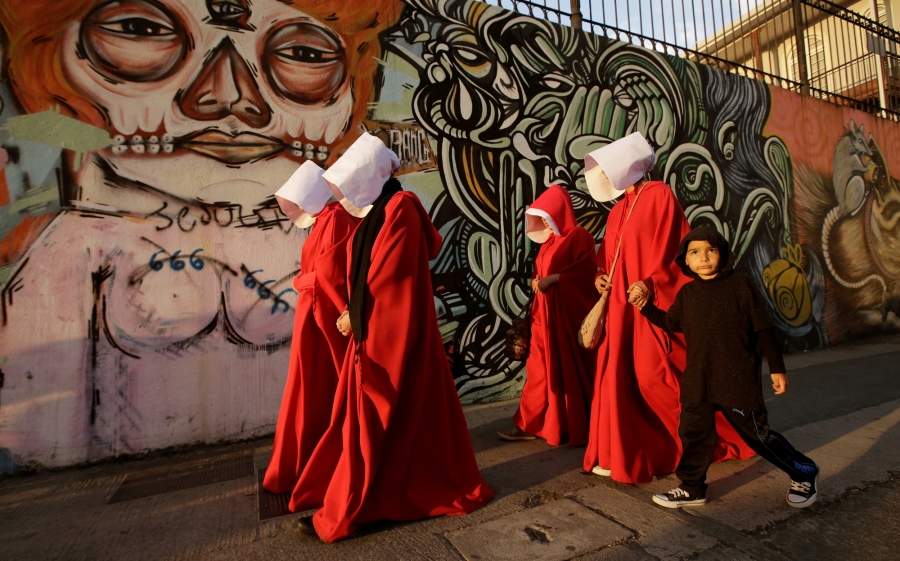 Activists dressed as handmaids take part in a demonstration against the proposed policies of the presidential candidate Fabricio Alvarado, an evangelical Christian of the National Restoration party in San Jose, Costa Rica, in March 2018. 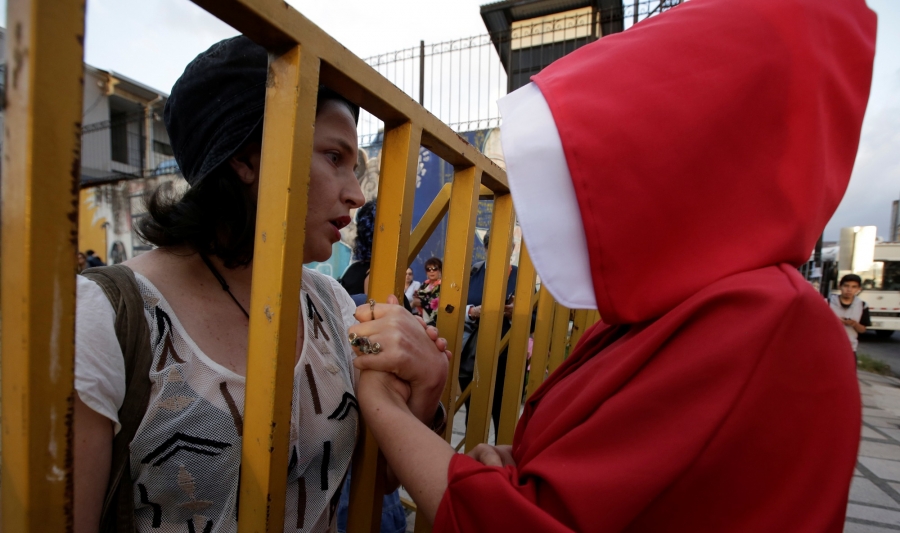 An activist takes part in a protest and vigil against femicide in San Jose, Costa Rica, in March 2018. 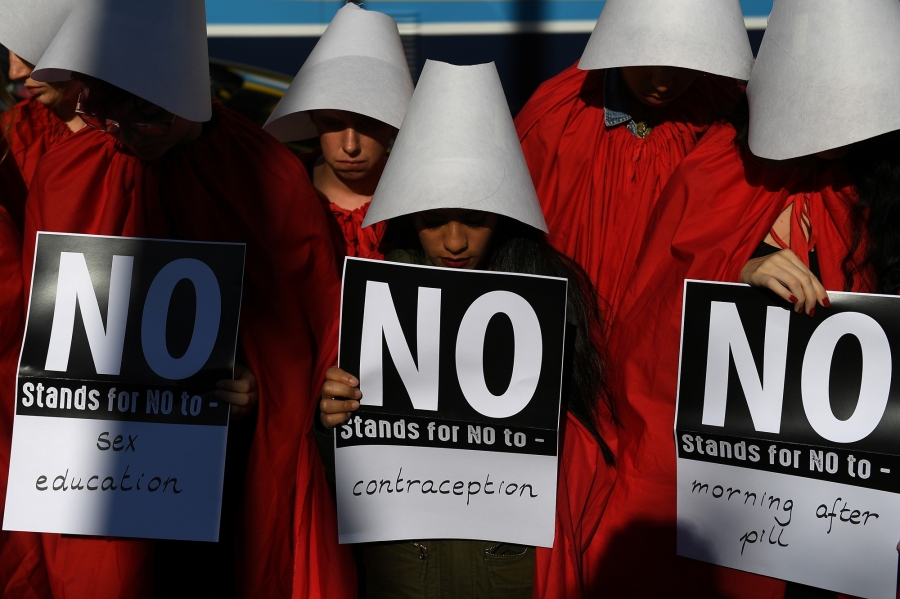 Abortion-rights activists take part in a demonstration ahead of a referendum on abortion law, in Dublin, Ireland, May 2018. 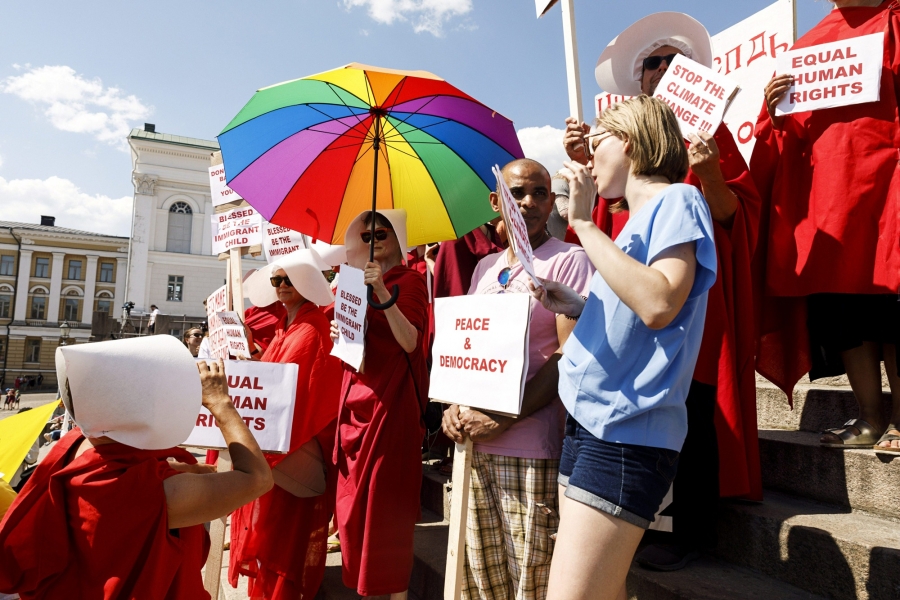 Demonstrators gather in Helsinki, Finland, before the Helsinki Summit, a meeting between President Donald Trump and Russian President Vladimir Putin, in July 2018. 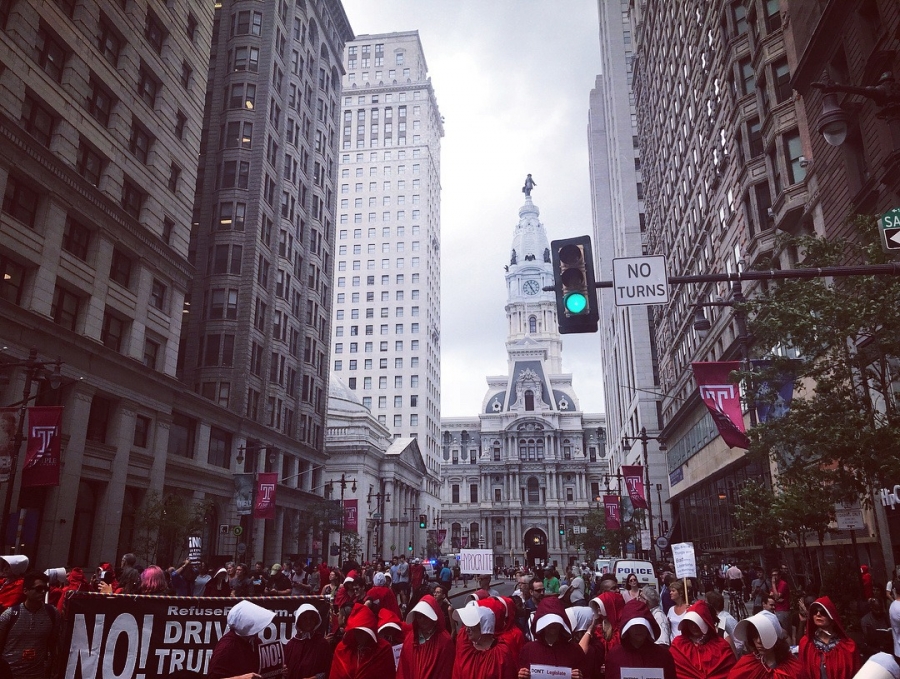 Women join a protest against Vice President Mike Pence in Philadelphia, Pennsylvania, July 2018. Pence was in the city to attend a fundraiser for Republican congressman and US Senate candidate Lou Barletta.
Credit: Samantha Pearson/obtained from social media via Reuters 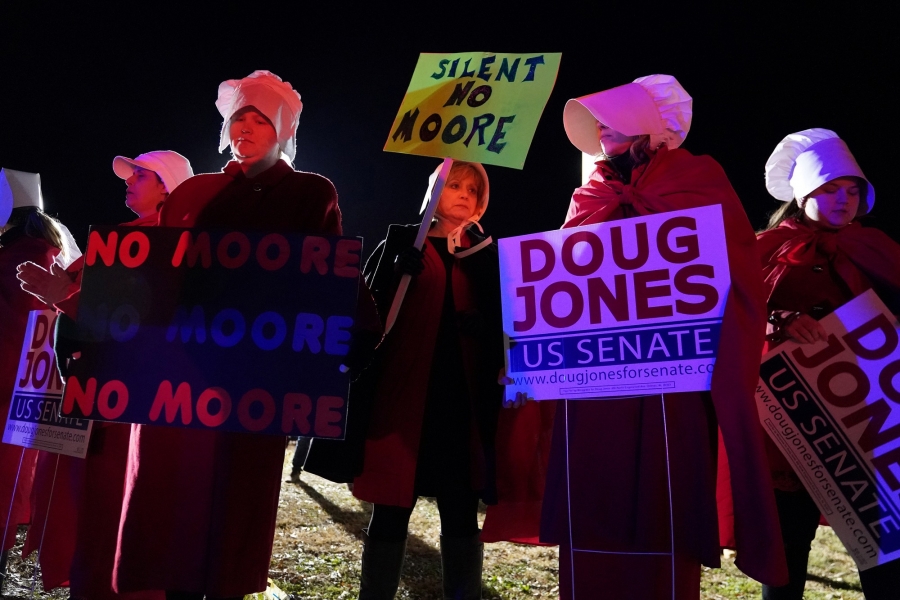 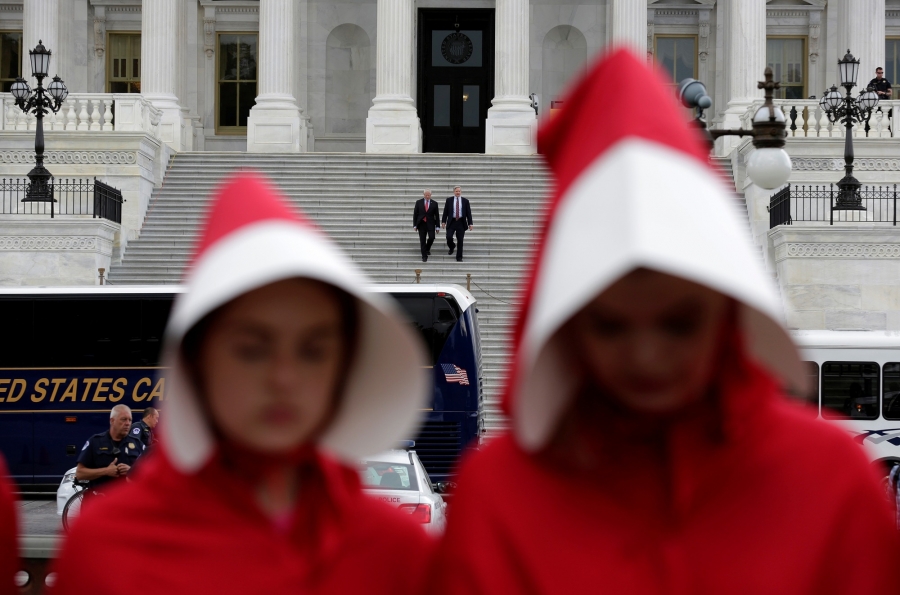 Senators Roger Wicker, a Republican from Mississippi, and John Hoeven, a Republican from North Dakota, walk down the steps of the Senate for a meeting at the White House as women dressed as handmaids demonstrate against the Senate health care bill at the US Capitol in Washington in June 2017.