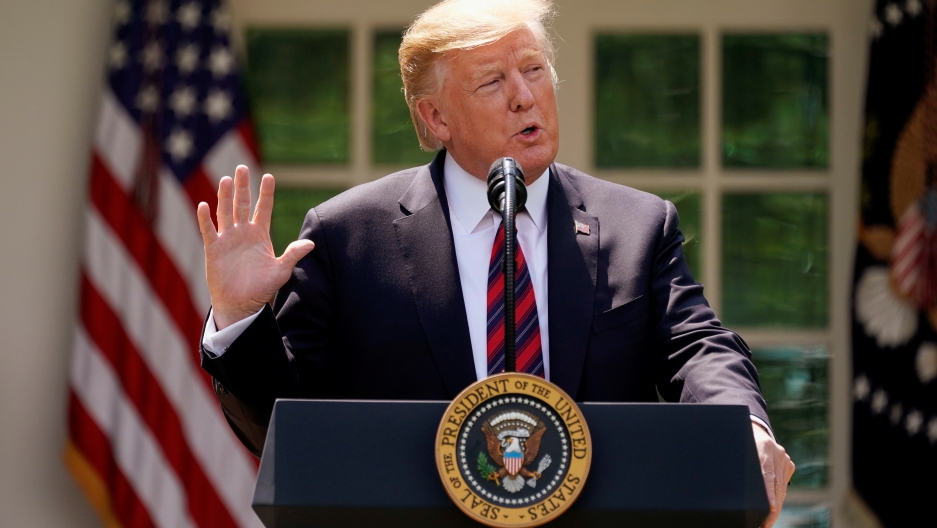 US President Donald Trump delivers remarks on immigration reform at a podium in the Rose Garden of the White House in Washington, DC, May 16, 2019

President Donald Trump announced on Thursday a new immigration proposal aimed at moving the United States’ immigration system toward one that prioritizes high-skilled workers over people with family links to the US.

His “merit-based, high-security plan” drew cool reception from political leaders on both sides of the aisle. For now, the plan is just a speech — more than anything else, it’s his immigration platform for his 2020 reelection campaign.

To get anywhere close to reality, legislation would need to be written and passed by a Congress that hasn’t passed a comprehensive immigration bill in a generation. Trump’s proposal doesn’t deal with the approximately 11 million undocumented immigrants living in the United States or Deferred Action for Childhood Arrivals beneficiaries. It also continues to push for a wall as the main way to solve the humanitarian crisis unfolding at the southern border with Mexico.

In unveiling the proposal — the brainchild of his son-in-law Jared Kushner — Trump said he wanted to model the United States’ immigration system on those of Canada and Australia.

Both countries use points-based selection systems where immigrants get points for criteria such as English language proficiency, employment experience and education levels.

Australia, for example, requires a minimum of 65 points for selection, though the threshold can reach up to 90 points for some industries. Applicants can get 20 points for superior English skills, another 20 points for holding a doctorate (versus 15 points for a Master’s degree), and up to 15 points for experience working overseas — with bonus points if they’ve ever worked in Australia.

Family-based admissions account for roughly one-quarter of immigration to both Canada and Australia, according to their respective immigration agencies.

That contrasts with the United States, where family-based admissions account for 66% of the roughly 1.1 million green cards issued annually, according to Department of Homeland Security figures. Economic-based admissions, or those where an employer may bring in overseas workers with a job offer, account for 12% of US immigration. The diversity visa, which grants legal permanent residency to 50,000 immigrants annually, accounts for 5%.

Could a “merit” or points-based system work in the US?

In theory, yes. It might even be good for the United States, economically speaking. But it would not solve the nation’s most pressing immigration problems, and it would require a fundamental shift in how the US approaches, uses and invests in its immigration system.

And that requires a lot of political will, not to mention bipartisan buy-in.

The way nations approach immigration is often rooted in their histories. Australia’s system emerged from deliberate efforts to increase its population — a vestige of the country’s post-World War II “populate or perish” rallying cry.

“I think the jump to thinking about a point system is four, five, six, seven, eight, nine steps down the path. ... You have to sort out things much earlier in terms of what your overarching policy to immigration is going to be.”

By the late 1990s, it had shifted to a skills-based model focused on bringing in immigrants who would improve the economy, said Abul Rizvi, a former deputy secretary of Australia’s department of immigration and border protection. Australia wanted to raise its birthrate amid an aging population, bring more people to less populated regions of the country, and boost support for industries such as education, mining, agriculture, and technology.

The United States, by contrast, moved to a system based on family sponsorship in 1965 with the passage of the Immigration and Nationality Act, which abolished discriminatory nationality-based immigration quotas. It allows people to bring their parents and siblings to the US — which Trump calls “chain migration.”

Transitioning to a points-based system would require a complete overhaul of US immigration admissions.

“I think the jump to thinking about a point system is four, five, six, seven, eight, nine steps down the path,” Rizvi said. “You have to sort out things much earlier in terms of what your overarching policy to immigration is going to be.”

US immigration policy under Trump is confusing, at best. Though this administration has said it wants to cut immigration, the latest proposal would maintain the same immigration levels but instead bring in a much higher percentage of high-skilled workers —  a move potentially at odds with the president’s “Buy American, Hire American” push to protect American jobs by making it harder for legal immigrants to come and stay in the US.

Related: In limbo, some families in the US with H-1B visas begin to make other plans

And while the US may admit fewer skilled immigrants in proportion to its population than Canada or Australia, that’s not to say those coming in through the existing system don’t have anything to offer.

“There is actually a lot of high skilled immigration that comes in through the family-based system. In the visa lottery program that he wants to get rid of, a large percentage of those people have advanced degrees.”

“It’s not true that just because you don't come in based on a selection criteria that looks at your skills, that you don't have them,” said Theresa Cardinal Brown, director of immigration and cross-border policy at the Bipartisan Policy Center, a Washington, DC, think tank. “There is actually a lot of high skilled immigration that comes in through the family-based system. In the visa lottery program that he wants to get rid of, a large percentage of those people have advanced degrees.”

Selecting immigrants purely on the basis of points — without considering family or local connections to the country — makes it harder for them to integrate after they arrive.

That’s why Australia and Canada both consider existing links to the country, such as whether a person studied there or has any siblings or a partner living there already. Further, their governments invest much time and money into helping immigrants integrate after they arrive and study their labor market outcomes for years afterward.

“We don't do that,” Brown said of the US. “And so one of the drawbacks of going away from the family sponsorship model is if you want the migrants to succeed you have to invest in the resources to give them the tools to succeed.”

“A points system only really works if you have an immigration system that allows you to adjust how the points are administered on a really regular basis."

Another stumbling block for the US might be its system of government, said Kate Hooper, a policy analyst with the Washington, DC-based Migration Policy Institute and co-author of a recent report on how Canada, Australia and New Zealand bring in economic migrants. A successful points-based selection system requires flexibility, she explained, which is a lot easier to come by in the parliamentary systems of Canada and Australia.

In the US, by contrast, immigration caps are set by Congress.

“A points system only really works if you have an immigration system that allows you to adjust how the points are administered on a really regular basis,” Hopper said. “Australia and Canada and New Zealand … are constantly looking at labor market needs and adjusting the points they’re assigning for different characteristics on a really regular basis. That’s a really responsive system that’s hard to replicate in the US.”

There are other differences between those countries and the US, too. For one thing, their geographies mean they don’t face the same issues as the United States in terms of its undocumented immigrant population — in Australia and New Zealand’s case, they’re surrounded by water and harder to reach, and in Canada’s, it only shares a land border with the US. Their national conversations about immigration pretty much only deal with legal, managed immigration. For another, their populations are significantly smaller.

The US would need to solve many other immigration problems before ever reaching the point that it would seriously consider Trump’s vision of a “merit-based” system.

“The point system, to me, is a piece of refinement way down the track,” Rizvi said. “If you haven't sorted out what you're trying to achieve, there's no point worrying about whether you're going to use a knife or a hammer.”

Tania Karas reported this story in part from Australia with the support of a Jefferson Fellowship from the East-West Center.