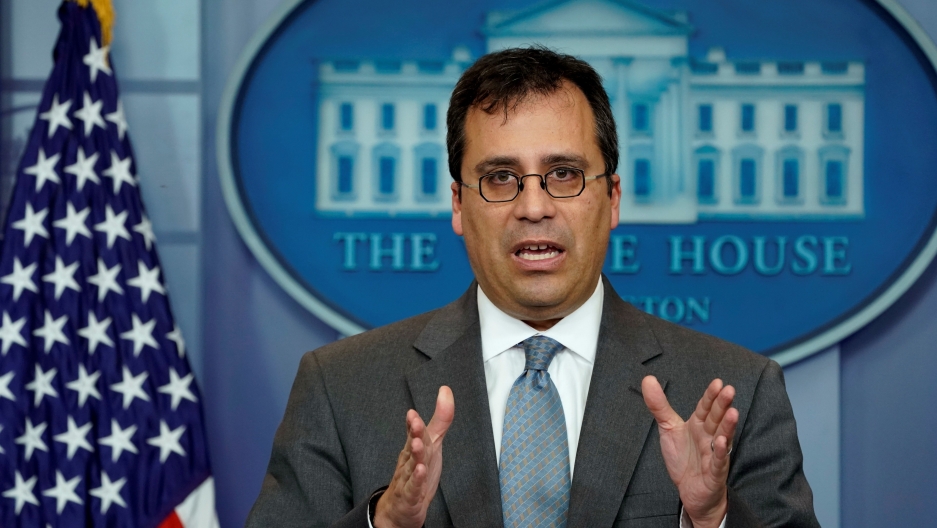 US Citizenship and Immigration Services Director L. Francis Cissna speaks at press briefing at the White House on Dec. 12, 2017. In August, 2018 he told a group that advocates for less immigration that he wants a rule to end work authorizations for spouses of employment visa holders to end.

She was 23 and not allowed to work in 2005 when she first came to the United States. Now 36, Archana Vaidyanathan is interviewing with major technology firms in Northern California to see if her expertise is still in demand.

Vaidyanathan holds an H-4 visa, given to family of those who come to the US with H-1B visas, sponsored by employers. The Department of Homeland Security filed an update in federal court on Aug. 20 that a new rule to rescind the right to work for spouses of H-1B visa holders is in its final stages of “clearance review.”

Update: Authorities said in a Sept. 21 court filing, three days after this story first ran, that the proposal to end work authorization for spouses of H1-B visa holders should take another three months.

“Well, I mean, that regulation is still being worked on, and there are — I definitely want that regulation to get out,” said L. Francis Cissna, director of US Citizenship and Immigration Services (USCIS), which administers the program. He said this in August, at an event hosted by the Center for Immigration Studies, which advocates for less immigration to the US.

“That regulation, though, is fighting for attention with a number of other regulations, some of them much bigger, probably more important, and not all of them from my own agency within DHS. But that doesn’t mean the H-4 regulation is not being worked on,” Cissna said.

In a statement to PRI, USCIS spokesperson Michael Barrs said that USCIS is continuing to review all employment-based visa programs, including the H-4, but that no decision is final until rulemaking is complete. “We will continue adjudicating all petitions, applications and requests fairly, efficiently, and effectively on a case-by-case basis to determine if they meet all standards required under applicable law, policies, and regulations,” he said.

And so, H-4 visa holders like Vaidyanathan are both creating backup plans to life and strategizing how to make the best of their current situations — because they don’t know what might pan out of these anxiety-inducing statements.

“Of course, the other side of the story is that I’m getting calls for interviews,” Vaidyanathan says. “Which tells me I’m a qualified candidate.”

Discussions on ending H-4 employment authorization started at the end of last year, when DHS first announced plans to rescind the 2015 rule that granted them. Under that rule, only H-4 visa holders whose spouses were on the path to permanent residency, after petitioning for and receiving approval for a green card, could apply.

But President Donald Trump’s “Buy American, Hire American” executive order proposed changes that lined up with arguments in a long-standing lawsuit against DHS. Save Jobs USA, an organization of former Southern California Edison workers who say they lost their jobs to H-1B workers, filed the lawsuit against DHS just before President Barack Obama’s 2015 order went into effect. John Miano, a labor attorney representing Save Jobs USA, previously told PRI the lawsuit was to prevent the loss of jobs for Americans.

Under Trump, the government is no longer defending itself in this lawsuit. DHS and Save Jobs USA have been waiting for a court decision to line up with a review of the regulation, says Sarah Pierce, an expert on employment-based immigration at the Migration Policy Institute. Before the Aug. 20 update, DHS had previously said it would rescind the work authorization in June.

Pierce says that as of Jan. 1, 2017, 22 percent of all holders of H-4s with employment authorization lived in California, according to data the Migration Policy Institute obtained under the Freedom of Information Act. In the Bay Area, where the cost of living has skyrocketed alongside the growth of the technology sector, dual-income households are common, if not essential.

For Vaidyanathan, work was not just a financial imperative. She had been a graphic designer in her home country of India, and became depressed when she moved to the US and realized that she was not allowed to work.

She started taking classes at a community college, earned a bachelor’s degree at the University of California, Irvine, and then won a scholarship that financed a graduate degree at Columbia University. In between, she had a baby, born in the US and thus a US citizen. She and her family moved from Irvine to Dallas, then to Minneapolis and New Jersey, and then to Fremont, a largely suburban city in the Bay Area. They have been on the waitlist for permanent residency since 2011.

More about the backlog: The children of H-1B visa holders are growing up — and still waiting for green cards

The timing of Obama’s employment authorization coincided with the family's California move; Vaidyanathan has been working full time as a user experience researcher for three years. It’s changed not only her outlook, but her relationship with her husband, who works as a software engineer.

“I think earlier, he felt burdened, to be able to financially manage everything alone,” she says. “But now, I think he feels like I’m an equal contributor.”

Pooja Vijayakumar is the lead researcher on a University of Tennessee study investigating the experiences of H-4 spouses. The study, which is not yet published, found that about 100,000 H-4 spouses — 90 percent of whom are Indian nationals — will lose their jobs if employment authorization is revoked. Their spouses on the H-1B visa will also face distress and financial burden, Vijayakumar says — especially in expensive regions like parts of the Bay Area, where a six-figure salary, in certain circumstances, can be considered low-income.

“You will see that a lot of these H-1B employees will move to Canada,” Vijayakumar says.

And that’s exactly what Vaidyanathan and her husband are now thinking — they are considering Canada, Europe or going back to India. Her discussions with technology companies about employment opportunities suggest they need workers like her. Studies this year from the nonpartisan National Foundation for American Policy found that US tech giants still heavily rely on H-1B skilled workers at the same time H-1B denials have increased under the Trump administration.

Vaidyanathan has also applied for her own H-1B visa through her company. But that’s more like a backup plan, she says.

“If that doesn’t go through, and if my [employment authorization] goes away, I would definitely not want to be here in this country.”

As for future beneficiaries, like current authorization holders, they are making other plans: The number of H-4 visa holders applying for their first employment authorization dropped by 75 percent this year.