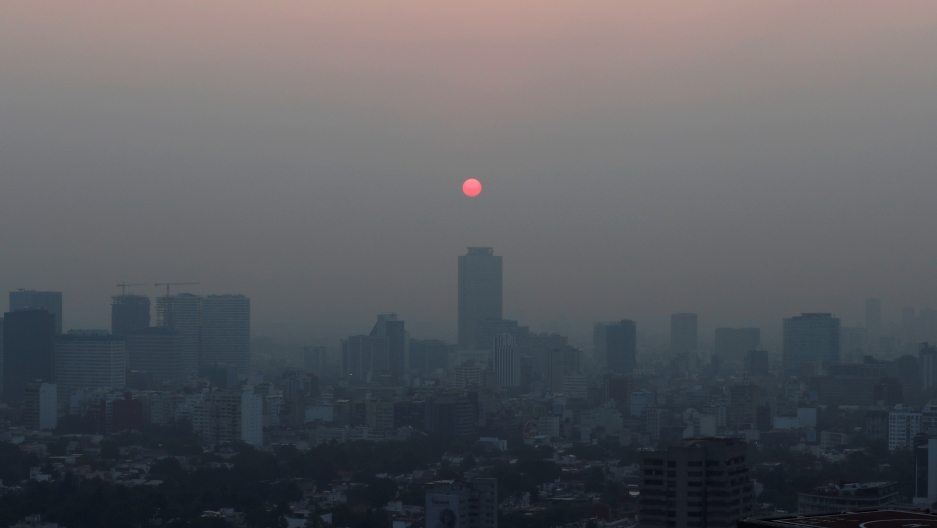 Buildings shrouded in smog are pictured as Mexico's government ordered schools in and around Mexico City to be closed on Thursday due to elevated levels of pollution, in Mexico City, Mexico, May 16, 2019.

Mexico’s government ordered schools in and around Mexico City to be closed on Thursday in an extraordinary step taken due to elevated levels of pollution in the smog-wreathed capital.

Smoke from nearby wildfires has pushed pollution to levels deemed potentially harmful to human health.

Smoke and fires in Southern Mexico are observed in this image taken by the NASA Aqua MODIS satellite on May 12, 2019.

Courtesy of NASA/Handout via Reuters

The city’s authorities declared an environmental emergency on Tuesday. They have come under pressure to act due to reduced visibility caused by smoke and ash in the air during an extended dry spell.

According to the World Air Quality Index, Mexico on Thursday was reporting levels superseding China and India. Over the past days, Mexico City air quality has been on par with that of Beijing, posting scores around 170. WAQI categorizes scores between 151 and 200 as “unhealthy,” noting, “Everyone may begin to experience health effects; members of sensitive groups may experience more serious health effects.” 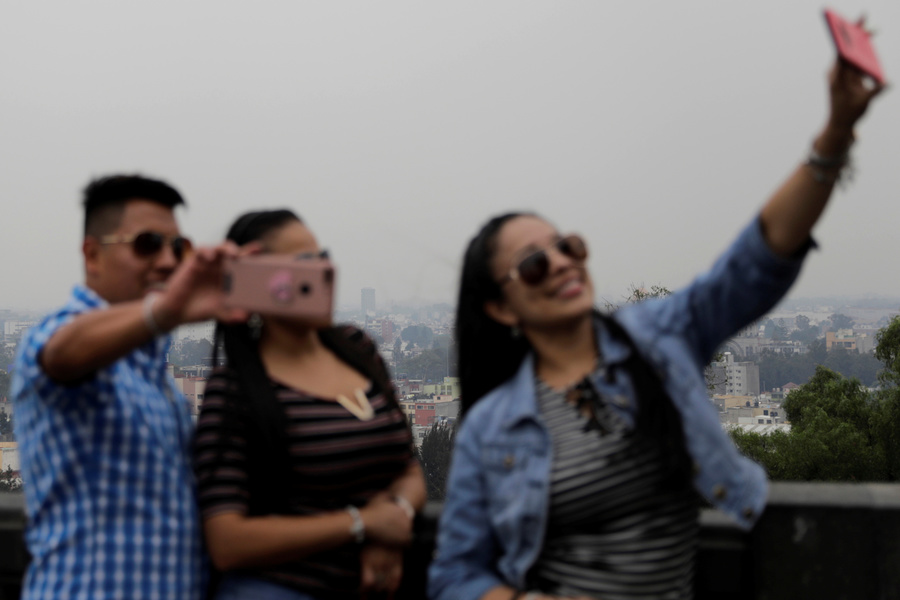 People take a selfie with the view behind during high levels of pollution in Mexico City, Mexico, May 12, 2019.

But in Aguascalientes, about 300 miles northwest of Mexico City, where one of the more than 100 wildfires in the country is burning, the WAQI index tops 800 — far beyond the 300 score cut off denoting hazardous conditions.

President Andrés Manuel López Obrador addressed the problem in a news conference on Wednesday, calling the pollution in the capital “highly regrettable.” 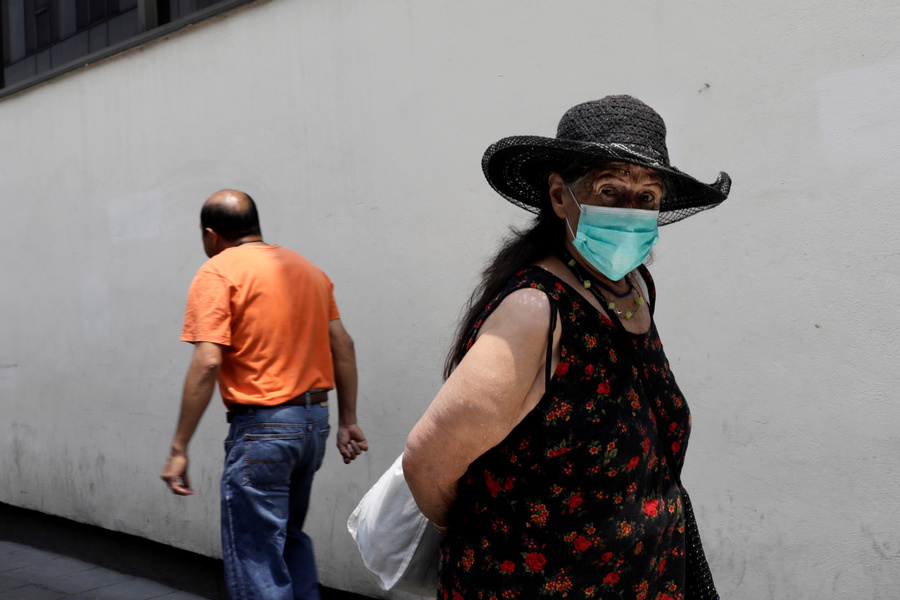 A woman wears a surgical mask after the authorities declared an environmental emergency on Tuesday for metropolitan in Mexico City, Mexico, May 15, 2019.

Some Mexico City denizens have maintained a sense of humor, even through facemasks.

Stayed outside in the poison air a touch too long and nearly faint-vomited. Bought a bunch of water in plastic bottles to stay hydrated inside. The future’s finally here! #mexicocity #ContingenciaAmbientalExtraordinaria

Mexico's capital has seen a backslide in improvements to air quality in recent years. But two decades ago, locals used to say that living in the city was like smoking two packs of cigarettes a day, The World reported in 2016. Memories of the 1980s, when the air was particularly bad, are vivid.

“We saw birds that suddenly fell down. They fell out of the sky and they were dead,” said Gabriela Alarcón, a pollution researcher at the Mexican Institute for Competitiveness, a think-tank in Mexico City. 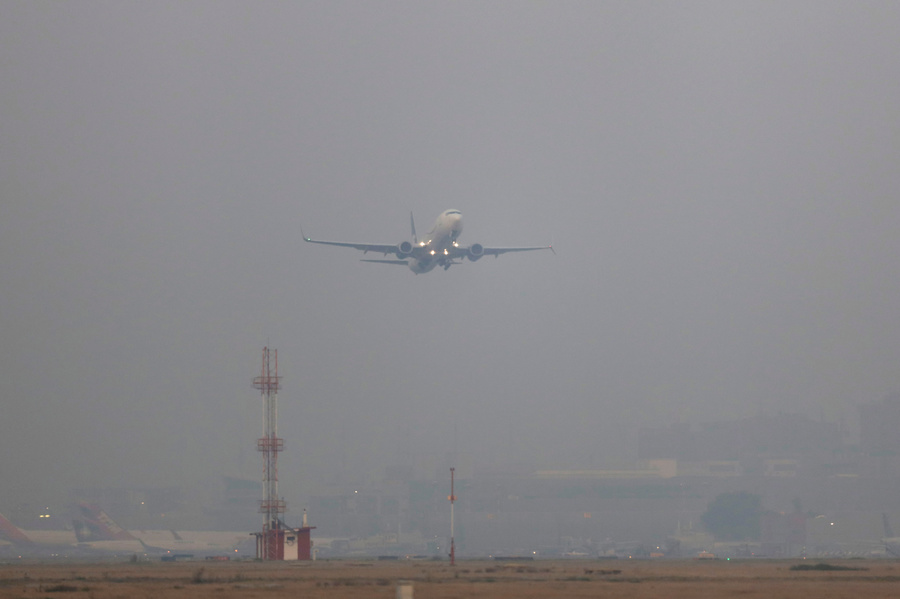 A passenger plane takes off at Mexico City's international airport as Mexico authorities declared an environmental emergency on Tuesday for metropolitan Mexico City, as smoke from nearby wildfires pushed pollution to levels deemed potentially harmful to human health, in Mexico City, Mexico, May 14, 2019.

In response, officials pushed out big refineries, banned leaded gas, and built more public transportation. The Hoy No Circula program also restricts vehicular traffic, alternating bans between days based on license plate numbers and emissions. Such efforts made a difference for a while, but have not maintained staying power.

Since the beginning of the year, Mexico City has had clean air on only nine of a total of 133 days, Mexico News Daily reported. 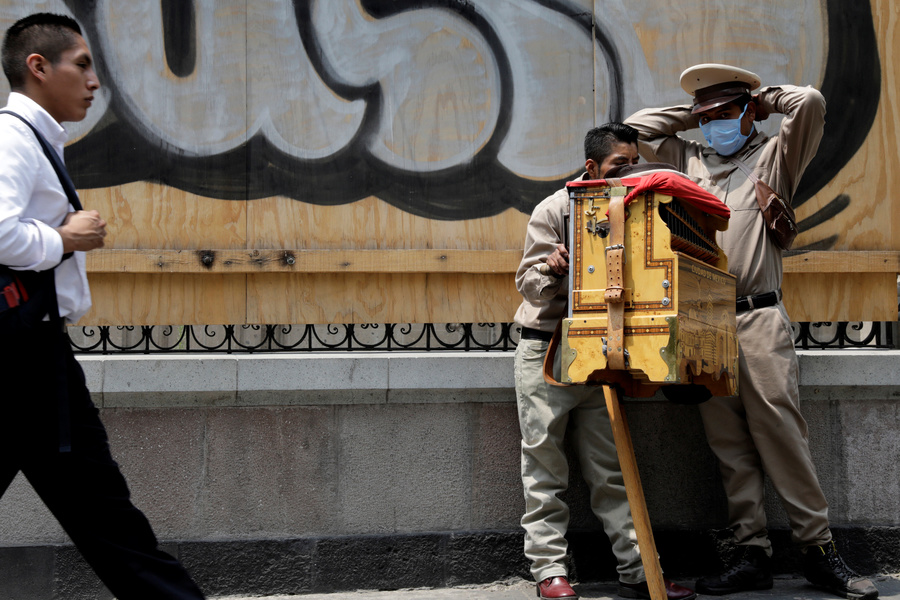 An organ grinder wears a surgical mask after the authorities declared an environmental emergency on Tuesday for metropolitan in Mexico City, Mexico, May 15, 2019.

Indra Ekmanis, Monica Campbell and Reuters contributed to this report.