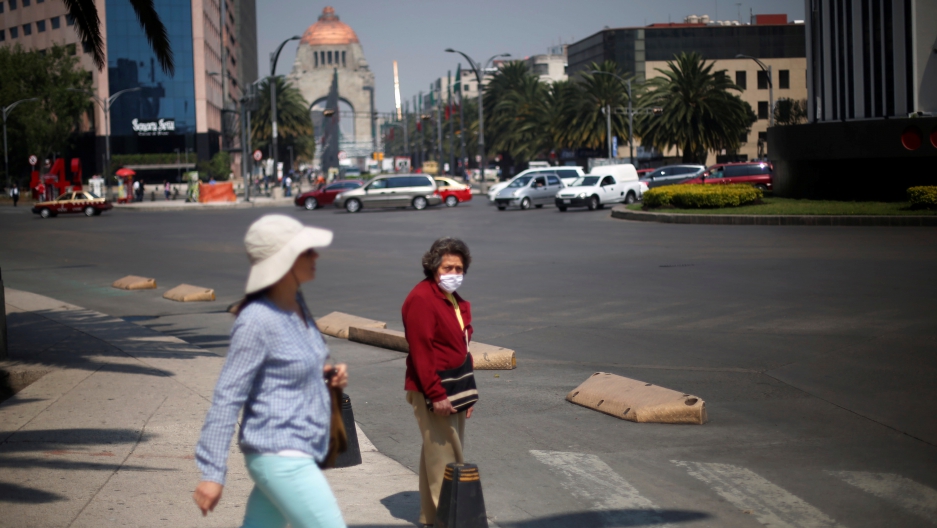 A woman wears a protective mask in Mexico City on May 5, 2016, a day when the city government imposed traffic restrictions to support anti-pollution measures.

On a bad day, you cannot see forever in Mexico City.

That's how it has been lately, ever since the city government rang the alarm bells over its air pollution, as it surpassed the recommended ozone limits set by the World Health Organization. It was the first time such alarms went off in more than a decade. The city banned cars, old and new, from roads once a week, along with other measures that will continue until June and perhaps longer.

It all raises the question: Will Mexico City risk the gains it made in the 1990s and return to its image as a pollution-choked city?

It’s a question that especially worries Catalina Guardado, who works at a nursery school in Mexico City. Like many other schools and nurseries here, it was shut down for a day in April, when ozone levels hit emergency levels. After it reopened, kids were kept indoors for days.

“We kept the windows and doors closed,” she says. The kids went stir crazy, but better that than risking their still-developing lungs.

What’s happening? Air quality has generally improved in Mexico’s capital over the last 20 years or so. Back then, locals used to say that living here was like smoking two packs of cigarettes a day. Memories are also fresh from the 1980s, when the air was particularly bad.

“We saw birds that suddenly fell down. They fell out of the sky and they were dead,” says Gabriela Alarcón, who researches pollution at the Mexican Institute for Competitiveness, a think-tank in Mexico City.

Since then, officials have pushed out big refineries, banned leaded gas, and built more public transportation. It all made a difference, for a while. But now things seem to be backsliding. By this time last year, 75 percent of the days had been considered bad air days. So far this year, it’s more than 80 percent. 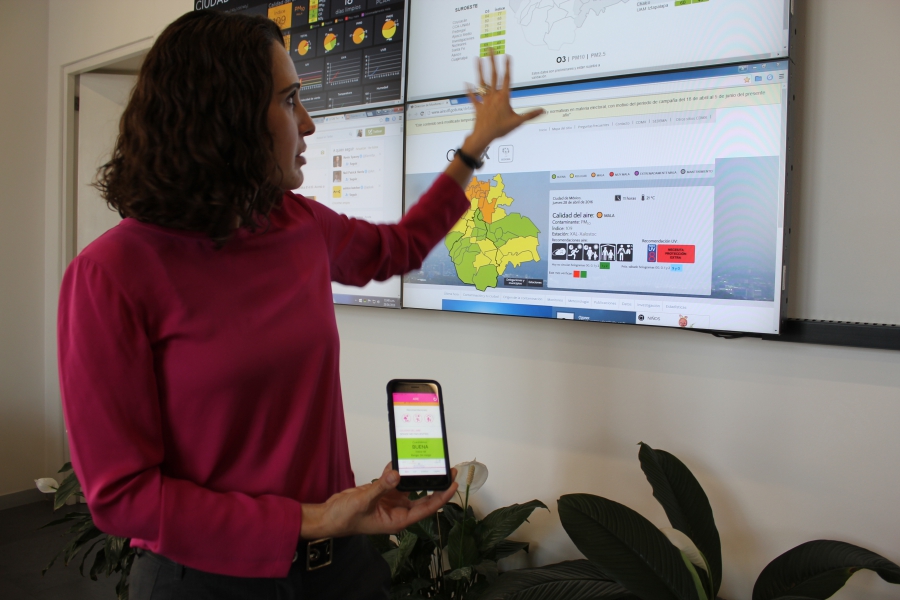 Tanya Müller García, minister of the environment for Mexico City, show her office displays that track air pollution in real time. She also show a smartphone app created by the city that lets the public monitor the city's air and receive alerts about traffic restrictions and whether to curtail outdoor activities because of air pollution.

Yet despite those improvements, Mexico City’s population continues to grow, up roughly 10 percent over the last decade, to more than 21 million. Most new residents live on the outskirts, and Alarcón says more sprawl, means “longer trips with more people driving cars.”

About 200,000 more cars are on the road every year here, according to the city. Many are new and cleaner (Mexico is a major car-making country and dealers offer consumers a raft of attractive financing options). But plenty of cars are still dirty, and smog checks can be avoided with bribes.

Alarcón also adds that many people who do not own cars rely on old, smoke-spewing buses.

She says a lot of people agree on what’s needed: “The best bet is to increase the quality and quantity of public transportation,” she says.

However, where there is cleaner and better public transportation, people pack in to use it, and the system is overwhelmed. Yet plans for new buses and subways in Mexico City are lagging. For now, the city is doubling down on a program that takes cars off the road once a week. (The ban does not apply to certain vehicles, including electric and hybrid cars, of which there are still very few in Mexico). Alarcón says that plan, known as Hoy No Circula (“No Driving Today”) is just a Band-Aid, and what’s really needed is more money and stronger political leadership.

City officials acknowledge that they’re having trouble keeping up with the air pollution problem. But they also say it needs to be put in context. “For example, China, there’s a huge difference between 100 parts per billion of ozone [in Mexico City] and 350 or 400 [in China],” says Tanya Müller García, Mexico City’s environment minister. She says Mexico City is doing better than many of the world’s megacities, and points out an important difference here from years past. “We’ve strengthened the levels at which we say we have bad air quality,” she says.

In other words, standards have tightened. Pollution alarms go off sooner here now than they used to, so what’s considered a bad air day now isn’t necessarily the same as a bad air day years ago.

That’s partly because we’ve learned a lot since the 80s about how air pollution can harm people. Someone who thinks about this — and studies what exactly fills the air here — is Michel Grutter de la Mora. He runs a large monitoring station in the southern part of the city, located at the Center of Atmospheric Studies, part of the National Autonomous University of Mexico.

On the center’s roof, where several instruments are set up, there is a 360-degree view of the city. On a clear day, you can see the Popocatépetl volcano, about 50 miles southeast. On a recent afternoon, the smog was heavy, and you could see only the volcano’s snow-covered top. 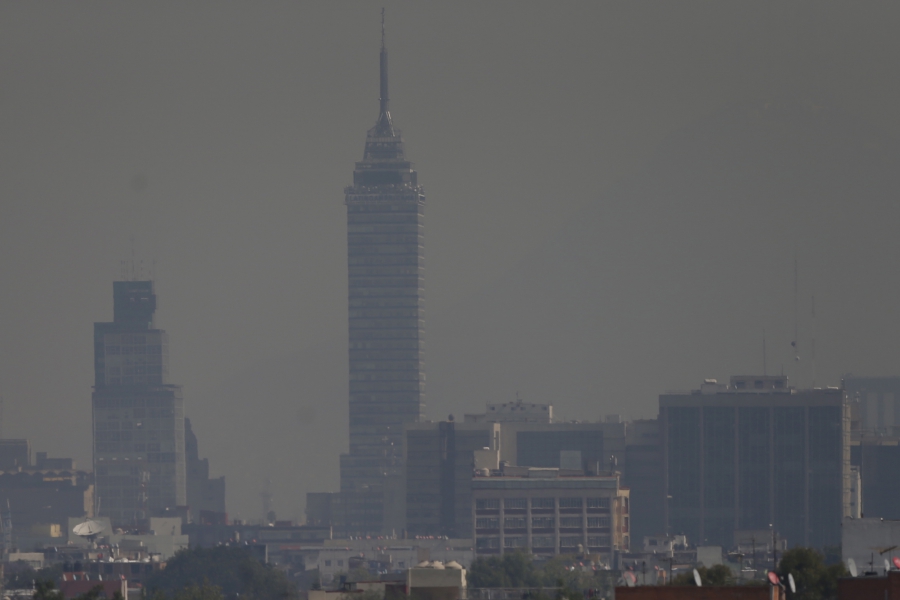 Grutter says ozone pollution can be very dangerous, but what he worries about most is something else: “The smaller particles, like benzene,” which can be carcinogenic, he says.

Small particles, or particulates, are a complex group of air pollutants that share a key feature. “They are sufficiently small that they reach our lungs and can be inserted into the blood stream,” Grutter says.

And when it comes to those smaller particles, we know now what we weren’t sure about a few decades ago.

Long-term exposure to small particles can make asthma worse, hurt kids’ cognitive and emotional development, even cause premature death. But Grutter also says Mexico City’s new air pollution crisis has an upside. He has noticed that public consciousness is up.

It’s definitely on the mind of Guardado, at the nursery school. She­­ says that when the air was particularly bad, she worried about the kids and noticed they all seemed to have flu symptoms. “There were runny noses, headaches,” she says.

But the culprit was unclear. Was it the flu or the air? If it was the air, she says, she wants more done about it, not just some cars taken off the streets until the rainy season comes and the air gets better — for a while.

Correction: An earlier version of this story quoted Michel Grutter de la Mora of the Center of Atmospheric Studies at the National Autonomous University of Mexico as saying that toluene, often a component of particulate air pollution, is carcinogenic. The US EPA, US Agency for Toxic Substances and Disease Registry, and International Agency for Research on Cancer have all determined that there's insufficient evidence to classify toluene as carcinogenic.