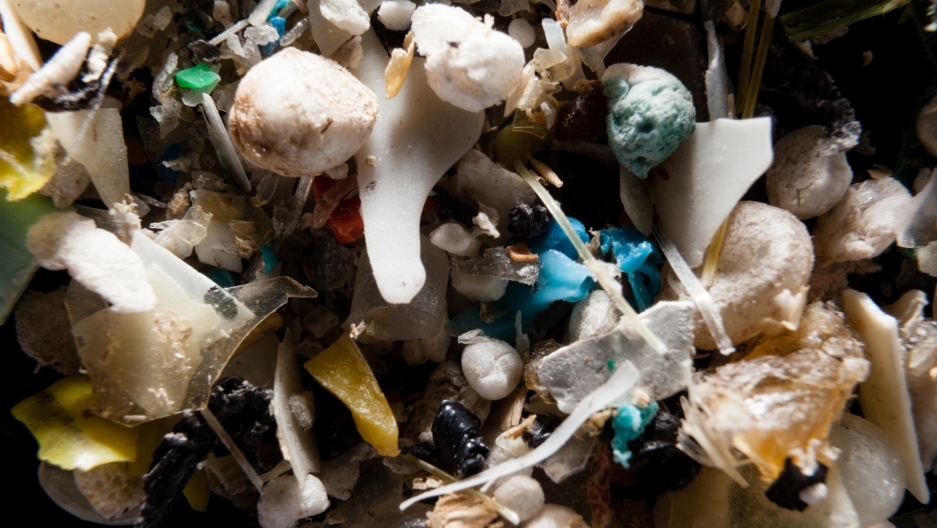 Microplastics from the Patapsco River are pictured at the laboratory of Dr. Lance Yonkos in the Department of Environmental Science and Technology at the University of Maryland in College Park, Maryland, Feb. 6, 2015. Microplastics were collected by the National Oceanic and Atmospheric Association Marine Debris Program in 2011 via a manta trawl in four tributaries feeding into the Chesapeake Bay.

News stories about plastic pollution tend to focus on the large patches of plastics in the world’s oceans, yet scientists are finding microscopic bits of plastic just about everywhere they look, including in remote, pristine environments and in the human body.

Microplastics pose an increasing risk to people and the environment in large part because they are so small and so difficult to track, says Andrea Thompson, who wrote a three-part series about microplastics for Scientific American.

In addition to the tiny bits of plastic that form when larger plastics like water bottles and bags degrade in the environment, smaller types of plastics called microfibers may pose an equally serious risk.

Related: Microplastics have even been blown into a remote corner of the Pyrenees

Microfibers are exactly what they sound like, Thompson says: fibers that slough off our clothing or from other fabrics that are already micro-sized. These fibers range in size from a few millimeters to things visible only with a microscope, as well as other types of materials called polymers, which are the chemicals that make up plastic. These are things like polyethylene, polypropylene and polystyrene.

Microplastics have become a global problem, Thompson emphasizes. In addition to oceans, scientists are now finding them in freshwater, as well, including in the Great Lakes, where scientists have measured concentrations of plastics similar to the large garbage patches, or gyres, in the oceans.

Microplastics have also been found in soil, Thompson notes. Wastewater, which is rich in nutrients, often gets applied to agricultural fields as fertilizer. Unfortunately, wastewater also seems to be rich in microfibers that come off of our clothing in the wash. These microfibers get applied to the soil, too.

Microplastics have turned up as far away as the Arctic — on Arctic sea ice and within it. “If it's there, it's pretty much probably almost everywhere on the planet,” Thompson says.

Scientists are also finding an even smaller class of materials they call nano plastics, which can be as small as a virus.

“Scientists are really only beginning to grapple with these because, while we can detect them in laboratory tests, where we kind of know what we're looking for, the technology isn't really there to find them in the environment,” Thompson explains. “Because the existing technology can't find things that small, we really don't have a good sense of how much of that [material] is out in the environment. But given that the smaller the size you look at, the higher number of particles you find, there’s a good chance that there are quite a lot of them out there, that we are only touching the tip of the iceberg with what we’ve found so far.”

“It's a really complex problem, to try and figure out how much of this is out there, where it's coming from, and how it's moving around the environment. ... That's what scientists are grappling with now.”

“It's a really complex problem, to try and figure out how much of this is out there, where it's coming from, and how it's moving around the environment,” Thompson adds. “That's what scientists are grappling with now.”

A growing body of research suggests that microplastics are carried around in the atmosphere, which would explain how they reach remote places with little human habitation. Primarily, these would be microfibers, because their shape and size naturally lend themselves to wafting through the air. You can see them if you look at a shaft of sunlight, Thompson says. The things in the air that look like particles of dust probably include microplastics and microfibers.

Photographs of whales and fish with their guts full of plastic have raised awareness of the damage plastics can do to wildlife, but what about potential damage to humans?

Related: If you're drinking tap water, you're consuming plastic pollutants

A recent study found microplastics in human stool samples — direct evidence that humans are ingesting them, Thompson says. And scientists already know that microfibers are small enough to penetrate deep into our lungs when we inhale them through the air.

While many cities are looking to ban single-use plastics, like grocery bags and straws, scientists who study the problem say these measures “won't come close to addressing the larger issue of the scale of the amount of plastic we produce,” Thompson says.

“[Bans] don't target plastic production directly, so if one city bans bags, the company that makes those bags might just shift their market somewhere else,” Thompson says. “And that market may not have as good a waste system as a city in the US. So is that really the best way to do it?”

The key, Thompson says, is to “just turn off the tap” and stop producing so much plastic.

“Right now, we can't clean it up as fast as it's going into the environment,” she says. “[We’re] playing a constant game of catch up. So, it's better to tackle the introduction and just stop new stuff from getting out there. That's going to take a dedicated look from lawmakers to figure out what [methods] are actually going to give us the most bang for our buck.”