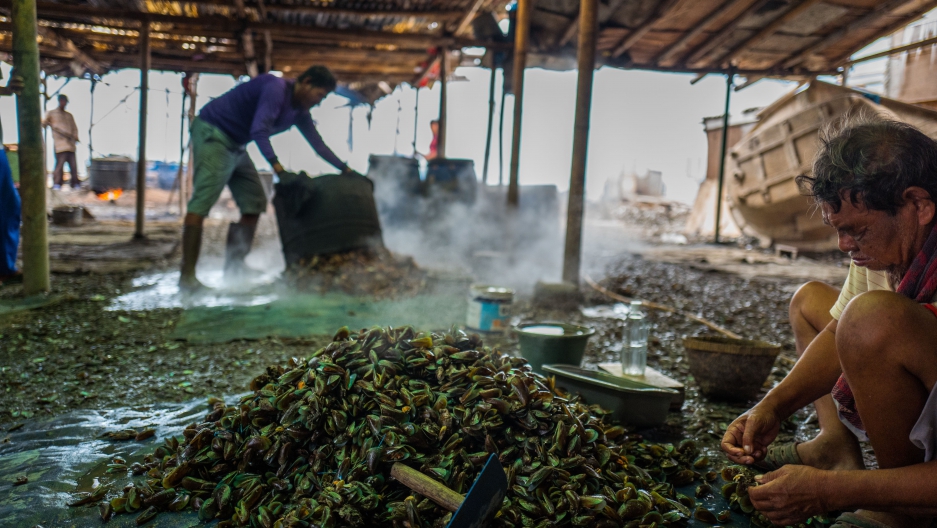 Muara Angke, Indonesia: Workers steam and shuck mussels pulled from the waters around Jakarta, Indonesia. Scientists have studied how micro plastics absorb toxins they are in proximity too and how they are then taken up into the food chain in mussels and other shellfish.

Microscopic plastic fibers are pouring out of household faucets from New York to Delhi, according to original research by Orb Media, a nonprofit digital newsroom in Washington, DC.

Working with researchers at the State University of New York and the University of Minnesota, Orb tested 159 drinking water samples from cities and towns on five continents.

Eighty-three percent of those samples, including tap water from the US Capitol complex, Environmental Protection Agency headquarters in Washington, DC, and the Trump Grill in New York, contained microscopic plastic fibers.

If synthetic fibers are in tap water, they’re also likely in foods prepared with water, such as bread, pasta, soup and baby formula, researchers say.

“This should knock us into our senses,” Muhammad Yunus, the 2006 Nobel Peace Prize laureate, said in a written statement. “We knew that this plastic is coming back to us through our food chain. Now we see it is coming back to us through our drinking water. Do we have a way out?” Yunus, the founder of Grameen Bank, plans to launch an initiative against plastic waste later this year.

A growing body of research has established the presence of microscopic plastic pollution in the world’s oceans, freshwater, soil and air.

This study is the first, however, to show plastic contamination in tap water from sources around the world, according to Orb.

Scientists say they don’t know how plastic fibers reach household taps — or, what the health implications might be. Some suspect they originate in synthetic clothing like sportswear, or in textiles like carpets and upholstery.

Experts are concerned these fibers may transfer toxins, acting as a kind of shuttle for dangerous chemicals from the freshwater environment into the human body.

In animal studies, “it became clear very early on that the plastic would release those chemicals and that actually, the conditions in the gut would facilitate really quite rapid release,” said Richard Thompson, the associate dean for research at Plymouth University.

“We have enough data from looking at wildlife and the impacts that it's having on wildlife” to be concerned, said professor Sherri Mason, a microplastics research pioneer who supervised Orb’s study. “If it's impacting them, then how do we think that it's not going to somehow impact us?”

The contamination defies geography and income: The number of fibers found in a tap water sample from a washroom sink at the Trump Grill was equal to that found in samples from Quito, Ecuador.

The US doesn’t have a safety standard for plastic in drinking water, an EPA spokeswoman said, nor are they on the agency’s Contaminant Candidate List of unregulated substances that are known to appear in tap water.

Of 33 tap water samples from across the United States, 94 percent tested positive for the presence of plastic fibers, the same average for samples collected from Beirut, Lebanon.

Mason, who chairs the department of geology and environmental science at the State University of New York at Fredonia, designed the study. Researcher Mary Kosuth performed the tests at the University of Minnesota. Kosuth will submit the study’s results for publication in a peer-reviewed journal later this year.

“Since this is the first global tap water survey of plastic pollution to have been completed, the results of this study serve as an initial glimpse at the consequences of human plastic use [and] disposal rather than a comprehensive assessment of global plastic contamination,” Kosuth wrote. “These results call for further testing within and between regions.”

Samples were collected by scientific professionals, journalists and informed volunteers following Dr. Mason’s protocols. “This research only scratches the surface, but it seems to be a very itchy one,” said Hussam Hawwa, CEO of the environmental consultancy Difaf, which collected the study’s Lebanon samples.

Experts say it’s too soon to know how plastic in tap water might compare in importance with better-known chemical and biological contaminants. “The research on human health is in its infancy,” said Lincoln Fok, an environmental scientist at the Education University of Hong Kong. 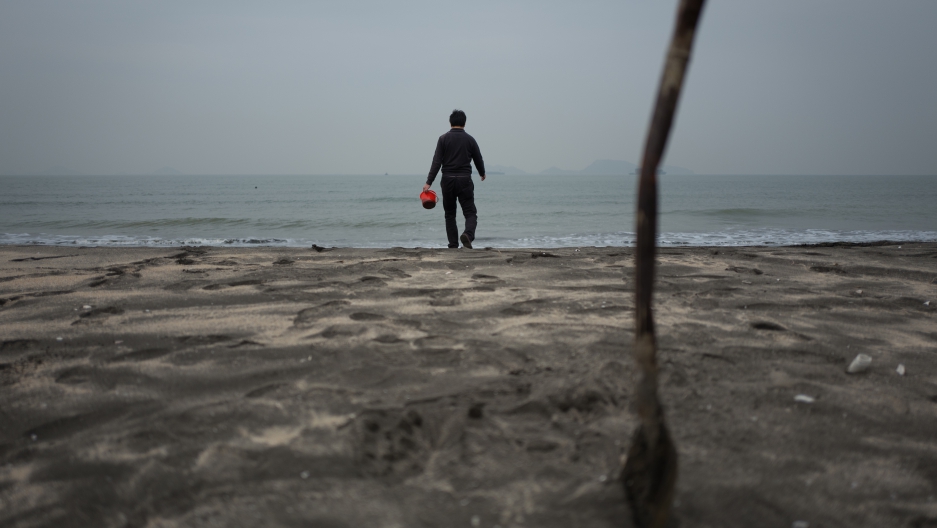 Dr. Lincoln Fok, a teacher and researcher at the Education University in Hong Kong, is pictured here. He studies microplastic pollution in Hong Kong and the South China Sea.

Orb’s research “raises more questions than it answers,” said Albert Appleton, a former New York City water commissioner.  “Does it bioaccumulate? Does it impact cell formation? Is it a vector for transmitting harmful pathogens? If it breaks down, what are its breakdown products?”

The world cranks out 300 million tons of plastic each year. More than 40 percent of that mass is used just once, sometimes for less than a minute, and discarded. But plastic persists in the environment for centuries. A recent study estimates more than 8.3 billion tons of plastic have been produced worldwide since the 1950s.

Related: Two proposals to clean up our oceans of garbage: Will either work?

Polystyrene particles less than 50 nanometers long (in light fluorescent green) have infiltrated the gastrointestinal tract, antenna, and thoracic appendages of this freshwater plankter, Daphnia magna. Plankton like these are the bedrock of the marine food chain. Research is just beginning on the accumulation of nanometer-scale pollution in wildlife. No analytical methods exist to identify nanoplastics in food. Plastic embedded in tiny plankton wind up in fish, which are eaten by bigger fish, which are eaten by us. This tiny plankter’s plastic problem is your problem, too.

But the notion of plastic-contaminated drinking water inspires confusion and denial.

“Our ongoing test results show no elevated levels of plastic and/or their breakdown constituents,” a spokeswoman for the Los Angeles water department said.

“It's bad; one hears so many things about cancer,” Mercedes Noroña, 61, said after learning a sample from her home south of Quito held plastic fibers. “Maybe I'm exaggerating, but I'm afraid of the things that come in the water.”

Many people are. A recent Gallup poll found 63 percent of Americans worried “a great deal” about polluted drinking water, the most since 2001.

“We have never found anything like that,” said James Nsereko, a fisherman on the shore of Lake Victoria in Uganda. But a 500-milliliter sample from Nsereko’s local tap contained four plastic fibers.

That number was far exceeded by the totals in some samples collected in the US. A half-liter sample of tap water from the US Capitol visitors center yielded 16 fibers, one of the highest totals, as did one from EPA headquarters. A sample from New York City Hall had 10.

There’s one confirmed source of plastic fiber pollution, and you’re probably wearing it. Synthetic garments emit up to 700,000 fibers per wash load, researchers at Plymouth University found. In the US, wastewater plants catch more than half; the rest pour into waterways. That’s 64,000 pounds of plastic microfibers a day, according to one study.

Some experts suggest these fibers are taken up by water systems in downstream communities, and piped into homes. “We're all downstream from someone,” Mason said.

Another source might be the air. A 2015 study estimated that between three and 10 tons of synthetic fibers fall onto the surface of Paris each year.

“We really think that the lakes [and other water bodies] can be contaminated by cumulative atmospheric inputs,” said Johnny Gasperi, a lecturer at University Paris-Est Créteil. “What we observed in Paris tends to demonstrate that a huge amount of fibers are present in atmospheric fallout.”

This may explain why fibers are found in remote water sources around the world. But Orb also found fibers in tap water drawn from underground sources. Are microscopic plastic fibers as small as one-tenth of a millimeter contaminating groundwater sources in places like Delhi and Jakarta? Or, are the plastic fibers getting in the water via contaminated delivery and treatment systems?

We’re left with a host of unknowns. How great is the danger if, for example, plastic fibers absorb endocrine-disrupting chemicals, which alter the hormonal systems of humans and wildlife, before being consumed with drinking water?

“We've never really considered that risk before,” said Tamara Galloway, an ecotoxicologist at the University of Exeter. 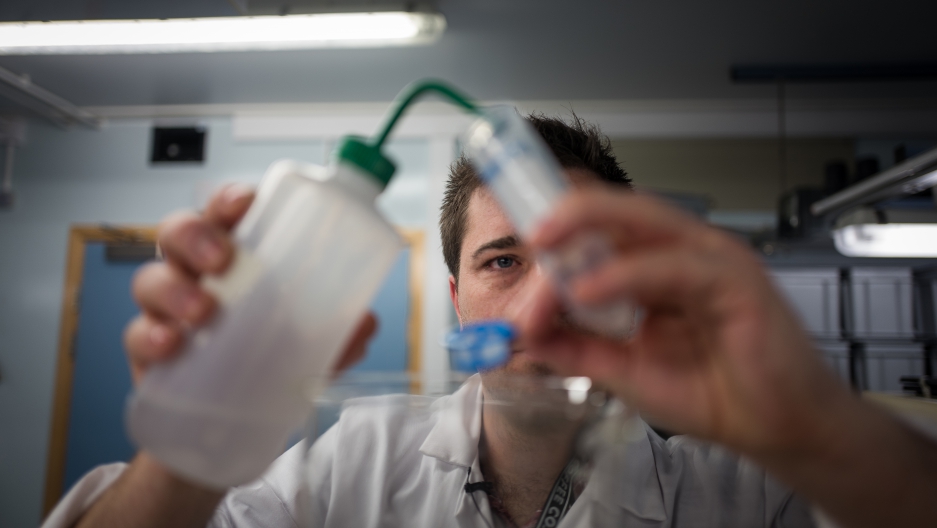 Dr. Matthew Cole, a researcher at the University of Exeter, England, works on an experiment about microplastics in zooplankton in the school's lab.

Cities are only just beginning to reckon with plastic fiber pollution and the role household laundry plays in it. Slowing the wastewater treatment process would allow for the capture of more plastic fibers, said Kartik Chandran, an environmental engineer at Columbia University. It could also increase costs.

Leading apparel brands say they are working to improve their synthetic fabrics to reduce fiber pollution in the environment.

And a new crop of filters, washing machine inserts and other products have emerged to reduce household laundry fiber emissions. Independent testing will show which of these methods is most effective.

“I didn't really think that it was.”