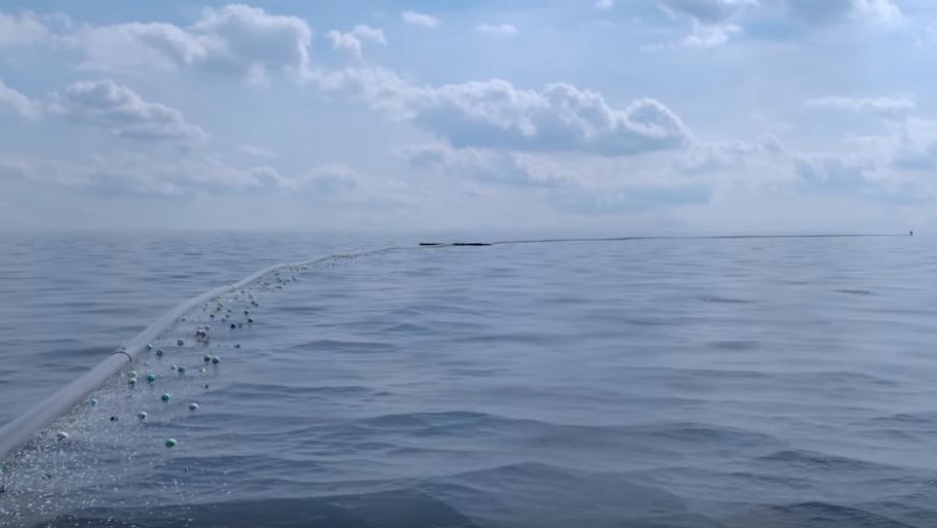 A simulation of the floating screens to be deployed by Ocean Cleanup to capture plastic trash as small as 1 centimeter and as large as discarded fishing nets.

By now, most everyone knows this dirty truth about our oceans: Tons and tons of plastic waste in the form of bottles, bags, fishing nets, Styrofoam, and a myriad other containers are routinely discarded into the sea. Marine scientists estimate that over 5 trillion pieces of plastic currently litter the oceans.

So is there any way to clean up that mess, and how feasible is it?

“In the past people have proposed to clean up these areas using boats and nets, but of course these areas are very large, many times the size of Texas, so if you were to do that it would take many thousands of years and billions of dollars to clean up just one of those areas,” says Boyan Slat, the young man behind an ambitious strategy called The Ocean Cleanup.

Slat was a teenager in the Netherlands in 2013 when he first proposed a technological solution to the problem of plastic pollution. It’s focused particularly in the region located between Hawaii and California known as the Great Pacific Garbage Patch. It’s considered the largest of five ocean garbage patches where ocean currents act like a gyre to concentrate the floating plastic debris.

“But then I thought this plastic is actually moving around, it doesn't stay in one spot. So why would you go after the plastic when the plastic can come to you?” says Slat. “So we came up with this passive system that uses very long floating screens floating around to concentrate the plastic like an artificial coastline.”

Despite much hype, Slat’s solution is still in the prototype stage. But the plan is that, within a year, the first Ocean Cleanup system will be towed out into the Pacific and will get to work. Basically, a floating U-shaped screen is weighed down and moves more slowly in the current than the floating plastic, so the trash gets snagged by the screen. Once gathered, the waste can be collected and stored more easily before it’s shipped to land for recycling.

Many questions have been raised about the viability of the Ocean Cleanup. Some critics call the elaborate environmental scheme a boondoggle. Hear The World's full interview with Boyan Slat:

For example, can the technology withstand fierce ocean storms? Slat and his team did test out floating screen technology in harsh North Sea conditions and it seemed to pass with flying colors, according to Slat. Also, what about the huge amounts of plastic litter entrapped by the floating screens? How does Slat propose to efficiently collect and retrieve vast amounts of plastic waste?

“Basically I have a fleet of cleanup systems floating around, up to 50 that we plan on deploying. Once a month, a vessel comes and basically goes from cleanup system to cleanup system like a garbage truck of the ocean. With this we basically calculated that we should be able to clean up about 50 percent of this great Pacific Garbage Patch in just five years’ time,” he says.

But the bottom line is this: Ocean Cleanup hasn’t yet been actually deployed. It’s still in development and could come online sometime in the coming year. So stay tuned.

Plastic waste pollution washed up on a Singapore beach, April 2015.

In the meantime, other marine scientists including Marcus Eriksen, founder of the 5 Gyres Institute in California, are working on an entirely different and global approach to ridding the world’s oceans of plastic litter. Eriksen believes in a prevention model and changing the systems that create the problems in the first place are the best way forward.

“That’s where a lot of the hard work is happening,” says Eriksen. “It’s far upstream trying to stop this flow of trash to sea. If you pick up what’s out there, you’re not stopping the problem continuing far into the future. You’ve got to stop the source.”

Eriksen points to what he calls a “rising tide of activism to fight plastic pollution.” Many cities around the world, for example, are installing booms in their rivers and estuaries to capture plastic trash before it washes to sea. Plastic recovery centers are starting to appear in South East Asia which Eriksen says are “getting really good at sourcing where plastic trash is coming from and separating what can be recycled and composted. Any plastic trash left over, they’re working with local companies to deal with it and to redesign excessive plastic packaging.”

That’s the kind of hard work that is required, Eriksen says, to stop the flow of plastic into the ocean. He insists, “That’s where it’s happening.”

"The detritus from shipping all these goods is overloading the waste stream, thwarting the “zero waste” goal of a... https://t.co/8qa93lVUmF

As for Slat’s big floating screens to be installed in the Pacific Ocean to be serviced by "ocean garbage trucks"?

Eriksen responds: "I’m sorry to say, but I think these downstream mitigations out in the middle of the ocean are a distraction from the work that almost all environmental organizations are focused on.”