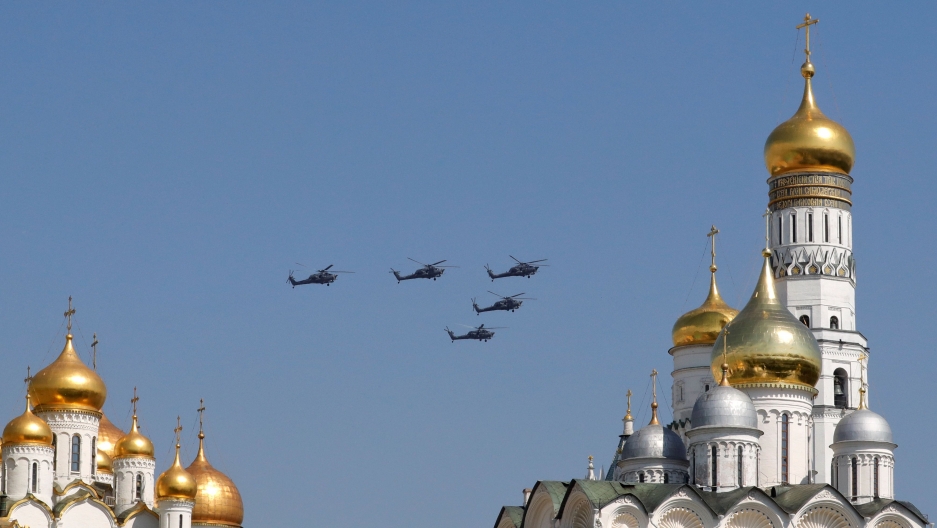 Mi-28N military helicopters fly in formation during a rehearsal for the Victory Day parade, which marks the anniversary of the victory over Nazi Germany in World War II, above the churches of the Kremlin in central Moscow, Russia, May 7, 2019.

We like to think of history as static and immutable. This happened, and then that happened, followed by something else — so our linear thinking goes.

The annual Russian tradition of commemorating the Soviet victory in World War II perfectly demonstrates how this approach to understanding history is not enough.

For the majority of Americans, the Eastern Front — its gargantuan losses, its unimaginable brutality — barely registers. Soviet involvement in World War II is not really a big part of our collective memory, or our popular culture, or our political and philosophical preoccupations.

Related: One day, there won't be any more Holocaust survivors. This museum is racing to preserve their stories.

The Cold War is to blame for that, but also the fact that the Soviet Union was, from the outset, a complex actor, in spite of being an ally. The fact that it was at the time ruled by a mass murderer, Joseph Stalin, doesn’t help. A lot of Americans simply don’t know what to think about the USSR’s role in the worst conflict in human history — and Russia’s revanchism on the world stage today doesn’t help, either.

Related: The pact between Hitler and Stalin that paved the way for World War II

I was part of the last generation born in the Soviet Union, in Soviet Ukraine, to be specific. Both my Ukrainian and Russian relatives fought in World War II. Both sides of the family suffered — it makes Russia’s modern war against Ukraine all the more grotesque for me. When people ask me for simple answers about the Soviet role in the old war, I usually tell them something like this: “The Soviets fought hard and won in spite of Stalin, not because of him.”

In modern-day Russia, my viewpoint is not particularly popular. The Stalin cult is enjoying a kind of revival under the leadership of Vladimir Putin and his “managed democracy” brand of authoritarianism.

There are various political reasons as to why retro-Stalinism is expedient for the Kremlin, but on the ground, most ordinary Russians lack trust in their local officials and their lives are characterized by extreme social inequality (a problem most Americans should be able to relate to, in this day and age). A strongman who was willing to ruthlessly purge his own officials can seem particularly appealing in this atmosphere — especially when one considers that schools and public institutions prefer to gloss over Stalin’s brutality.

Speaking of trust, and of the way history is actually mutable, today’s grand victory celebrations in Russia are not strictly about defeating Nazi Germany. We must remember that the generation that actually did the defeating is all but gone. The Kremlin, meanwhile, has no official ideology aside from “let us and our friends be corrupt in peace,” covered up with a fig leaf of reactionary conservatism.

In this sense, coming together to remember World War II is a grand, public-bonding ritual for an atomized society in which people have a hard time trusting each other (once again, the legacy of Stalin’s Terror is a major factor in this atomization). It’s not so much about triumph in a terrifying conflict anymore as it is about tradition, a way of expressing pride, even if it be a twisted “Russia has enemies everywhere and will stomp on them if necessary” kind of pride. For some people, it’s just about dressing up in 1940s-era vintage and — surprise! — having a little bit of fun.

I’ve often said that post-Soviet societies suffer from collective post-traumatic stress disorder. The number of Soviet dead in World War II is disputed, but we can all agree that it was well over 20 million, if not almost 30 million. The human mind can hardly begin to comprehend this level of loss, and behind every loss a story, a tragedy, whether recorded and remarked upon or passed unnoticed and forgotten.

No matter how much the Kremlin co-opts the legacy of World War II for its own political purposes, the underlying trauma is still there. Maybe it will die with my generation — the people who knew their grandparents, who had relationships with them, who observed the way their pain echoed through their words and actions — or maybe it will give rise to yet another, potentially horrifying political ideology, who knows.

All I really know is that displays of military hardware — as fascinating and even beautiful as it can be — is also another way of displaying scars.

Natalia Antonova is a DC-based writer and the editor of Bellingcat. She worked in Russia from 2010 until 2017.