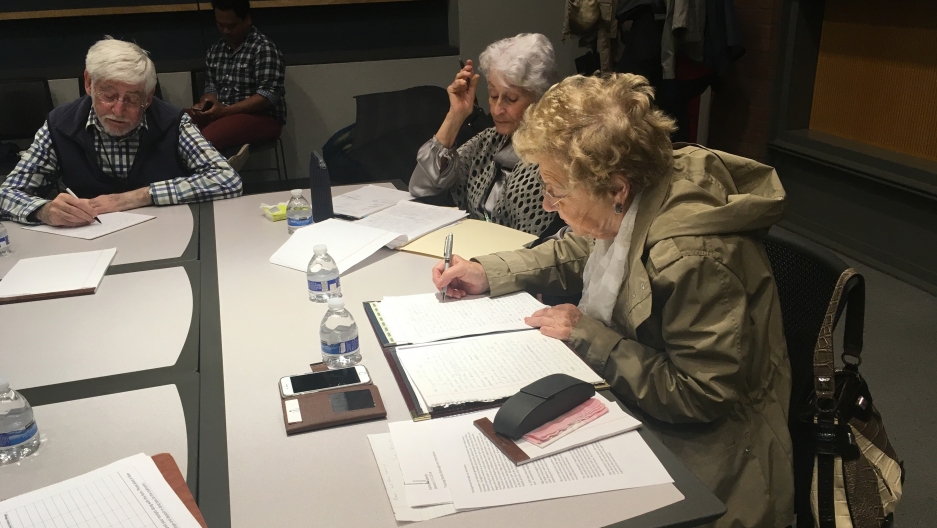 Halina Peabody, right, at a writing workshop for survivors organized by the US Holocaust Memorial Museum in Washington, DC.

Halina Litman Yasharoff Peabody remembers the events of her life during the Holocaust in remarkable detail.

She was only 6 when Russians invaded her Polish town, arrested her father and sent him to a prison camp in Siberia. The Germans arrived in 1941, setting off a string of horrors for Peabody, her mother and her baby sister: the hiding, the ghetto, the mass graves, the escape by train and the bomb that took two of her fingers.

Related: In Germany, there are growing fears of a rise in anti-Semitism

“You don’t forget those things,” she said at the United States Holocaust Memorial Museum in Washington, DC, recently. “And I’m one of the last eyewitnesses.”

Eyewitness perspectives like Peabody’s have served as invaluable educational resources for the Holocaust Museum since the institution opened near the National Mall 25 years ago. But as the number of survivors dwindles, the museum must prepare for a future without them.

Peabody is part of a team of more than 80 survivors who fill a wide variety of roles as volunteers, ranging from translating primary source documents for the collections to completing the museum’s intensive tour guide training and leading visitors through the exhibits.

Peabody has traveled from her home in Bethesda, Maryland, to the museum nearly every week for the past 15 years. Sometimes she works at the information desk in the light-filled lobby. On other days, she tells her story in front of an audience as part of the museum’s First Person event series.

It’s a well-oiled, mutually beneficial system. Like many survivors, Peabody said she feels drawn to the museum, its staff and the network of other survivors. “They are all my family,” she said after saying goodbye to a staff member with a kiss on the cheek. “Because I don’t have any, you know? They’re mine.”

The museum staff also relies on the survivors to connect with visitors in a visceral way that an exhibit alone cannot accomplish. Diane Saltzman, the museum’s director of constituency engagement, said survivors help create lasting impressions among new audiences, particularly children. Every year, she coordinates around 375 events around the country with survivors who volunteer at the museum, enabling them to travel to other communities outside of DC to share their stories.

Related: Hundreds of Israeli rabbis say they will personally hide African asylum-seekers in their homes

But time is taking its inevitable toll. Saltzman has been invited to 80th, 90th and even 100th birthday parties for aging survivors. The oldest survivor who is still volunteering is 101 years old. “It’s a challenge, from a personal perspective. These are not just people that come to work every day. They are family,” Saltzman said, echoing Peabody.

To help survivors record their personal histories, the museum runs a monthly writing workshop for them.

On a recent morning in May, as kids in brightly colored T-shirts and squeaking sneakers filed through the exhibits upstairs, a group of one to two dozen survivors assembled in a basement room and sat down around a large rectangular table. Peabody is one of the group’s regular attendees.

Related: For over 90 years, this Holocaust survivor's art has kept him alive

The instructor, Maggie Peterson, said her goal is to help the writers communicate their stories without getting bogged down in little details. “The work that we’ve done is to try to expand on the stories, because otherwise it’s very much just a timeline,” she said.

First, Peterson instructed the class to take 15 minutes to write down memories on a random subject — on that day, she’d picked the idea of matchmaking. Then, they took turns reading out loud.

“After the war, the situation was the same,” began one student.

“I was 45 when I started dating my basherte,” read another. “That’s Yiddish, or Hebrew, for ‘soulmate’ or ‘bride.’”

Most of the students learned English as a second or third language. The language barrier, combined with the scarring memories, made the act of writing difficult for many.

Thanks to the workshop, they’re now talking — and writing — about it every month. Many of the pieces from the workshop have been posted on the Holocaust Museum’s website.

Looking to the future

Across the building is the expansive office of Sara Bloomfield, who has been the museum’s director since 1999. Bloomfield has been trying to prepare for a world without survivors since the museum was in development, back in the mid-1980s.

“We do realize that 50 years from now, when we celebrate another big anniversary, the eyewitness generation will be gone,” she said.

Many of their memories already are. Despite the museum’s many successes, the Holocaust continues to fade from public consciousness. A recent survey found that 66 percent of millennials do not know that Auschwitz was a concentration camp. Eighty percent of Americans have not visited a museum about the Holocaust.

So, Bloomfield said, “keeping the lessons of the Holocaust relevant and reaching a global audience are two of our biggest challenges going forward.”

The museum plans to expand its collections, translate its website into more languages (it’s currently available in 16), launch new programs to study modern-day genocides and present special exhibitions in more countries around the world. To do all of that, Bloomfield’s team recently embarked on an ambitious fundraising push.

For her part, Halina Peabody said she has already noticed an uptick in visitors’ interest in her story. “It’s very, very popular, for some reason,” she said with a laugh. “I think we’re dying out so fast, so everyone wants to hear about it and have somebody bear witness.”

Twenty-five years ago this month, another survivor, Elie Wiesel, said those same words during his speech at the museum’s dedication ceremony on the National Mall.

As rain and wind pelted Washington, 30,000 people huddled under umbrellas, trench coats and hats to hear the Nobel Peace Prize winner talk. Wiesel, the museum’s founding chairman, stood on stage in a black coat with a stiff collar, his gray hair disheveled. He barely looked at his notes.

Wiesel died in 2016. His words are engraved on one of the museum’s granite walls, forever visible to all who choose to visit.

The United States Holocaust Memorial Museum holds a monthly workshop for survivors to encourage them to write down their stories.