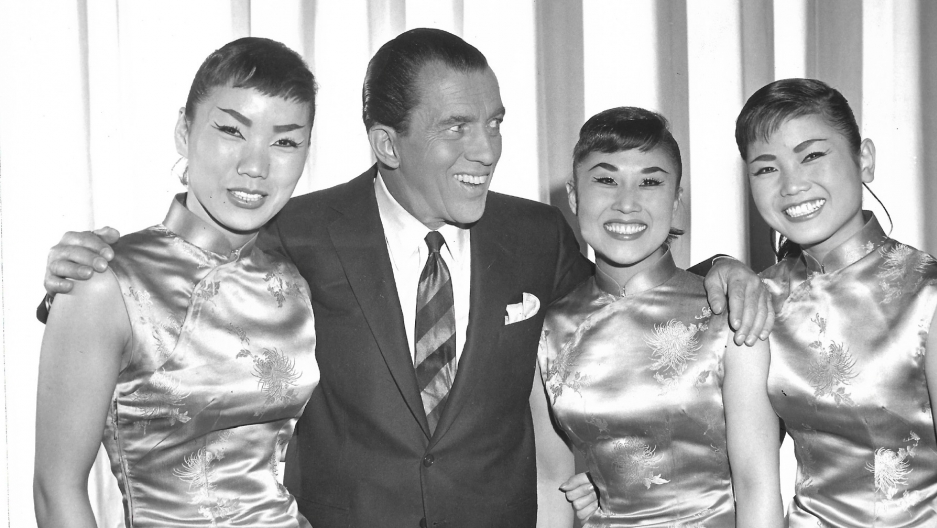 The Kim Sisters, Sue, Mia and Ai-ja (left to right), pose with Ed Sullivan backstage after one of their numerous appearances on The Ed Sullivan Show, 1961.

If you want to sing along to today's top hits, you might be belting out Korean lyrics.

Korean pop music bands like BTS and BLACKPINK have lit up US music charts and taken on the American teen scene by storm. But 60 years before this “K-pop invasion,” the Kim Sisters, a Korean girl group, landed on US shores and rocketed to stardom — singing American hits before they even learned English.

Now little known outside of Korea, it was sisters Sue (Sook-ja) and Ai-ja, along with their cousin Mia (Min-ja), who introduced American audiences to Korean popular entertainment at the height of the teenage craze for both rock n’ roll groups and soulful girl groups.

Related: How a Japanese girl-group empire is conquering Asian pop

The Kim Sisters’ musical career began in Korea during the Korean War in the 1950s. Born into a famous musical family, Sue and Ai-ja spent their early years in a large house near Seoul under the thumb of the family’s patriarch. Their father, Kim Hai-Song, was a decorated composer and set high expectations for his children's musical performance.

Kim was an outspoken anti-communist who incorporated Western styles into his musical composition. When war broke out in Korea in 1950, Kim was taken prisoner and later executed by communists from the north. This left Lee Nan-Young, the girls’ mother and the most famous singer in Korea at the time, to fend for her seven children alone.

With a handful of American music records, Lee-Nan Young molded Sue, 12, Ai-ja, 11, and adopted niece Mia, 10, into a sister act.

Musical performance spelled survival for the Kim sisters in the 1950s, as it had for their parents under Japanese colonial rule in the 1930s and '40s. During the Korean War, a military entertainment circuit linking US military “camp towns” sprang up in the war-torn country, and local performers could eke out a meager living performing for American soldiers.

With a handful of American music records, Lee molded Sue, 12, Ai-ja, 11, and adopted niece Mia, 10, into a sister act, emulating wholesome American girl groups like the Andrews Sisters and McGuire Sisters. The girls performed on the military circuit from 1953 to 1958, spending those five years rehearsing, learning instruments and improving the act.

The Kim Sisters’ energetic style and smooth vocals were a hit with American GIs. Singing for army rations like chocolate and alcohol, the girls performed a mix of American standards and styles, from folk and hillbilly to country and salsa. One of the first songs they perfected was Hoagie Carmichael’s “Ole Buttermilk Sky.” The Kim Sisters didn't speak English, so they sang their songs phonetically.

Singing for army rations like chocolate and alcohol, the girls performed a mix of American standards and styles.

Satisfying the GIs’ nostalgic yearnings for home, the Kims were encouraged by the homesick Americans, who, as Sue remembers in her biography by Sarah Gerdes, shouted “go, go, go, more, more, more!” at the young girls.

Bob McMackin first saw the girls perform on the Army circuit in 1957. An ex-GI-turned-music-promoter, McMackin became the Kim Sisters' first manager and worked to bring their act to the US.

“You’ll have to do more to stand out in the US,” Lee had insisted, said Sue in an oral history project on women in Las Vegas entertainment. 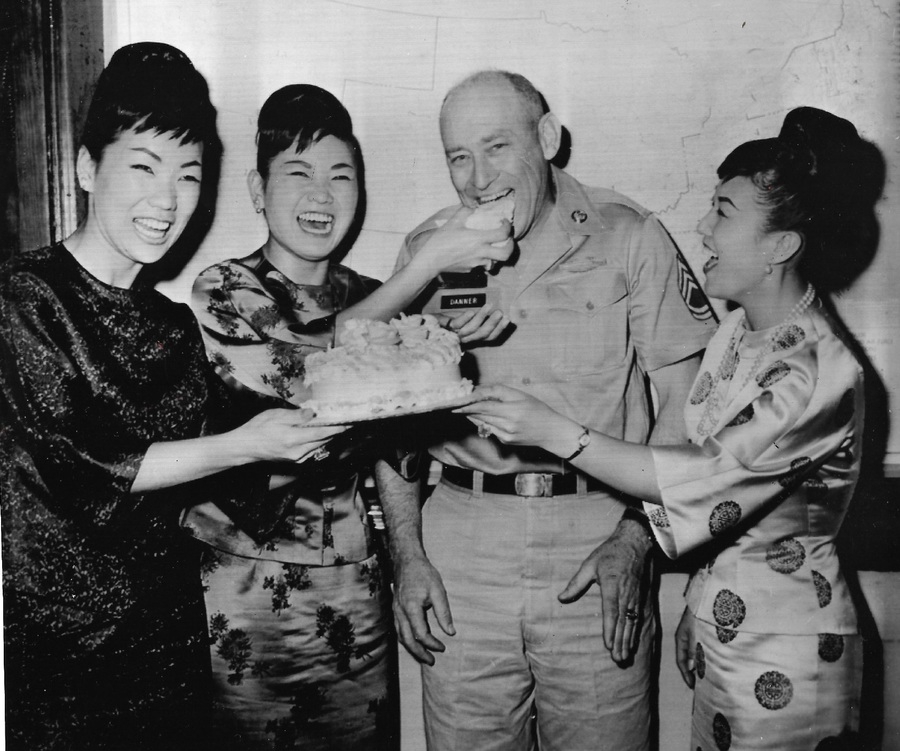 Securing visas from South Korea's newly-formed government, the Kims traveled as special “cultural ambassadors” to the US, helping to reinforce a Cold War alliance between the nations. The US had invested in rebuilding the war-torn Republic of Korea, stationing troops there to contain the spread of communism from North Korea, China and Russia. A decade after they arrived in the US, Kim Hyun-Chul, ambassador of the Republic of Korea, presented the Kim Sisters with an award honoring their contributions as goodwill ambassadors.

“Don’t come back until you are a success,” Lee told the girls just before they left their home country for the US, writes Gerdes.

But Kims' fame in the US did not come easily.

The 'face of Korea' in the US 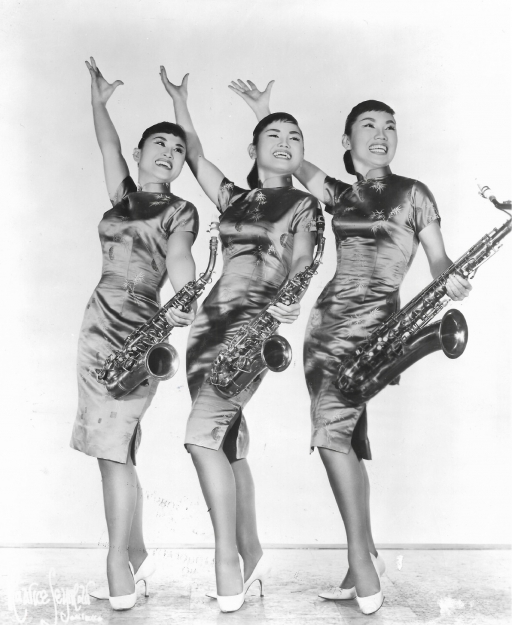 Mia, Ai-ja and Sue Kim (left to right) played numerous instruments. Here they pose with saxophones for a 1961 publicity photo.

Three months after they arrived in the US and after performing on stage in a Las Vegas show called “China Doll Revue,” in 1959 the Kim Sisters debuted on US television. Ed Sullivan, who years before had seen a short reel of the girls performing, took a strong liking to the young women and offered them a multi-year contract on his hugely popular Sunday night variety show. For their first of 22 appearances on the show, the Kims covered the McGuire Sisters’ ballad “Sincerely,” a song they had learned when they had first begun performing in Korea. During their tenure on the show, the Kims, now in their early 20s, continued to perform in Las Vegas showrooms and night clubs across the country.

Throughout the 1960s, the Kim Sisters were the “face of Korea” and seen as adopted family members to American audiences. They worked tirelessly as traveling performers and minor TV personalities on variety shows like "Hollywood Palace," "The Dinah Shore Chevy Show" and military-themed shows like "Ensign O’Toole."

In spite of their success and fame, the Kim Sisters’ stardom was constrained by America's narrow ideas about East Asia and longstanding desires for images of “exotic” East Asian women.

But in spite of their success and fame in the US, the Kim Sisters’ stardom was constrained by America's narrow ideas about East Asia and longstanding desires for images of “exotic” East Asian women. Their 1964 self-titled album, produced by Monument Records, contained a confusing mix of “Oriental” and American songs, and TV producers, like Ed Sullivan and Dinah Shore, patronized the Kims at every turn by repeatedly calling attention to their foreignness. 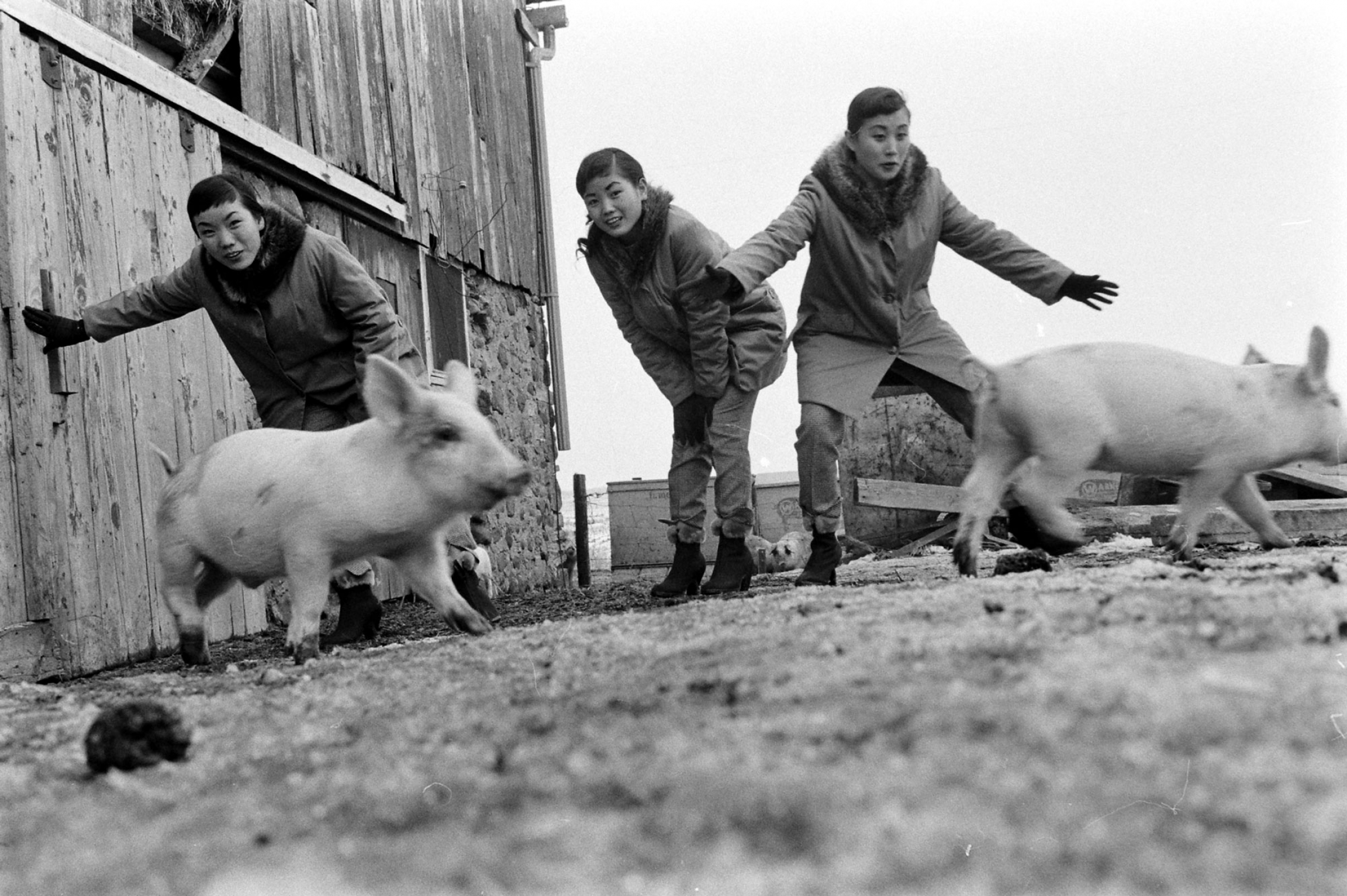 LIFE Magazine published a story on the girls’ background and journey from Korea. Photos that accompanied the story ranged from candid snapshots of the girls backstage to photos of the girls visiting a white American family on their farm in Illinois.

The Kim Sisters' second stage manager and booking agent, Tom Ball, mistreated the girls, exploiting their earnings. For years, the sisters could not travel back to Korea for fear of not being able to return to the US, though they regularly sent money home to help their large family stay afloat. Like many in Korea at the time, their family struggled tremendously in the years after the war for basic subsistence, food and clothing; they relied on the Kim Sisters' earnings for survival.

Their mother died in South Korea in 1964. But when the sisters became US citizens in 1968, they helped their four brothers immigrate to the US from Korea.

By the 1970s, with years of hard work, struggle and heartache behind them, the Kims finally began to experience musical performance as a way to connect with fans, not just as a means of survival.

Sue still performs today, mostly for benefit concerts in Las Vegas but also in Korea. Mia lives in Hungary with her husband and regularly performs in jazz clubs, but the two have not remained close. Ai-ja died of lung cancer in the 1980s. While the group is no longer together, the Kim Sisters are treasured in Korea for their achievements.

The Kim Sisters embodied K-pop before K-pop emerged as a cultural industry in the 1990s. Today, BTS and BLACKPINK are breaking music industry barriers internationally. But it was performers like the Kim Sisters who set the stage for these groups generations ago. As icons of Korean popular culture, the Kim Sisters forged a path for musical exchange between South Korea and the US and proved that a market for Korean entertainers was viable in the US.

Editor's note: Danielle Seid is an assistant professor of English at Baruch College, CUNY, where she teaches courses in feminism, literature and film.