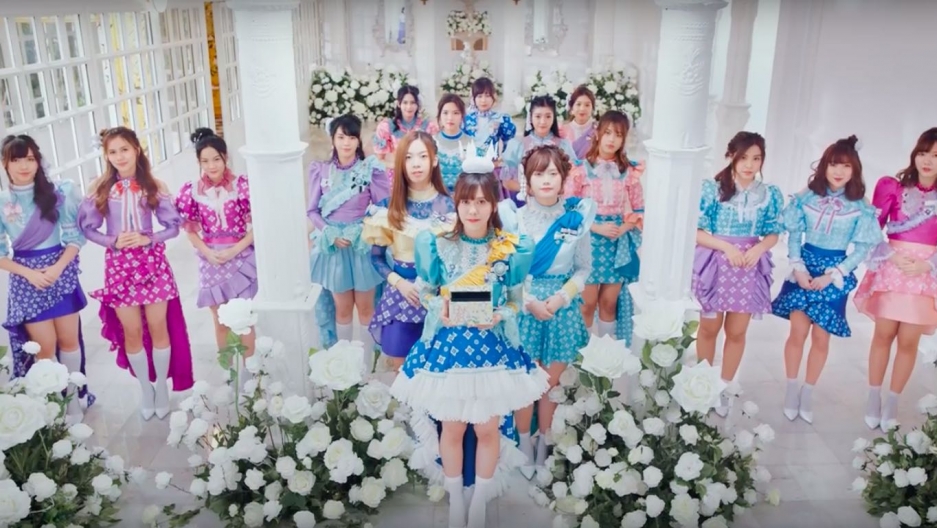 Members of BNK48, a Thai power-pop ensemble with more than 50 members. They are a satellite of the world's biggest pop group: AKB48 in Japan.

The world’s biggest pop group, literally speaking, is AKB48. This Tokyo-based power-pop ensemble typically features between 110 and 140 singers. Most are in their late teens with a smattering of 13-year-olds and women in their mid-20s.

When the group debuted in the mid-2000s, AKB48 was more easily dismissed as a novelty act. But in recent years, the group has expanded into a bona fide musical empire — one that has spread across Asia. It is now reimagining what it even means to be a pop group, borrowing elements from both “The Mickey Mouse Club” and “The Hunger Games.”

Roughly 10 years ago, as AKB48’s popularity exploded, it started spawning sister groups across Japan in cities such as Osaka. This brought the total membership to more than 300 singers. But now, the group is in the midst of an even grander feat: building up foreign satellites across Asia.

Related: As the West jeers, durian mania rises in Asia

These overseas groups — seven in total— bring the combined number of singers in the AKB48 universe to well over 500.

There’s SGO48 in Saigon, MNL48 in Manila, JKT48 in Jakarta and perhaps its most influential franchise of all: BNK48 in Bangkok. Many of these groups’ hits are simply Japanese-language AKB48 songs translated into Thai or Tagalog or Vietnamese.

“Thailand hasn’t had a really popular bubblegum group like BNK48 for a long while,” said Nutthapong Chaiwanitphon, a 40-year-old Thai author, fluent in Japanese, whose books interpret Japanese culture (including idol music) for foreigners.

“With so many singers, they can be everywhere at once. They can split up, holding a live event over here, performing on TV over there, all on the same night.”

“With so many singers” — BNK48 alone has more than 50 — “they can be everywhere at once,” he said. “They can split up, holding a live event over here, performing on TV over there, all on the same night.”

The AKB48 empire appears to have solved a puzzle that has vexed the global music industry for nearly two decades: How can musical acts profit when fans keep pirating and streaming instead of buying albums?

As in America, AKB48 and its franchise acts rely heavily on concert tickets, a commodity that can’t be streamed. However, they’ve exploited this tactic to the extreme, building dedicated theaters across Asia where these groups will perform multiple times per week — and often multiple times in one day.

Exhaustion is less of a factor when your band has 50 members instead of five. (A live show can feature just a dozen or so singers instead of the whole ensemble.)

But the massive size of these pop groups is not their most radical feature. They’re also pioneering new ways to monetize obsession, namely by charging fans for face time — and even physical contact.

Imagine Beatlemania at its mid-1960s peak, the “I Want to Hold Your Hand” era, when the Beatles’ live shows conjured screaming mania from crowds. Now, try to picture John, Paul, George and Ringo stepping offstage, asking fans to line up and then charging them money to literally hold their hands.

That’s more or less what AKB48 and its sister acts will do. They sell “handshake tickets” that are often acquired by purchasing a CD. Fans will show up to an auditorium with their tickets, choose their preferred singer, get in line and wait hours for a handshake lasting three to eight seconds. (The length of time can depend on the singer’s popularity.) 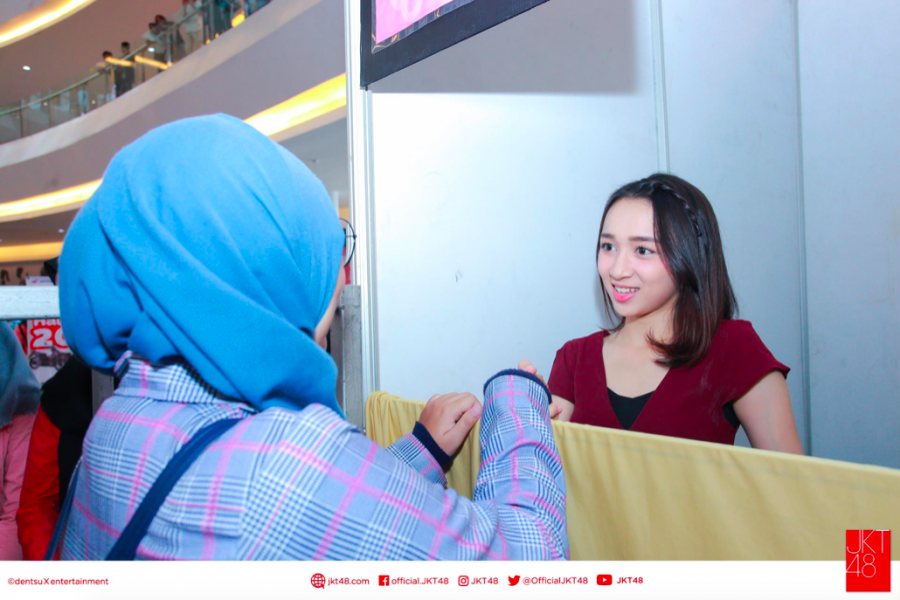 A singer in JKT48 — based in Jakarta, Indonesia — greets a fan at a "handshake event."

“Fans just want that precious moment. Some will even buy 20 CDs to get 20 tickets and just throw the CDs away. That way, they can enjoy a whole minute with their idol.”

“It’s not a business handshake. It’s actually more like hand-holding,” Nutthapong said. “Fans just want that precious moment. Some will even buy 20 CDs to get 20 tickets and just throw the CDs away. That way, they can enjoy a whole minute with their idol.”

Nutthapong, who once queued up to meet a BNK48 member, says the singer asked his name, pleaded with him to support her career and — to his astonishment — ended the encounter by saying “I love you!” in Thai.

Related: A tech startup called OMG wants to revolutionize cash for hundreds of millions of 'unbanked' people in Asia

But there is a reason that idols — especially less-popular members of satellite groups — might blurt out something provocative to secure a fan’s devotion.

Within each group in the AKB48 empire, singers must wage a never-ending internal war to amass more public adoration (and more Instagram followers) than their bandmates.

Fans of idol groups hold an unusual power over singers: the ability to chart their destiny for a fee. They get to vote in a “general election” that determines which singers will appear on the next smash single — and which will not. (Most songs max out at roughly 16 singers per track.)

Acquiring a ballot usually requires — you guessed it — purchasing a CD.

This is not a one-person, one-vote system. Nothing prevents a superfan from buying 100 CDs and submitting 100 ballots to tilt the odds in their favorite singer’s favor. The performer blessed with the most votes may end up sitting on a gilded throne, draped in a regal cloak and gripping a golden scepter, all as an adoring crowd applauds. 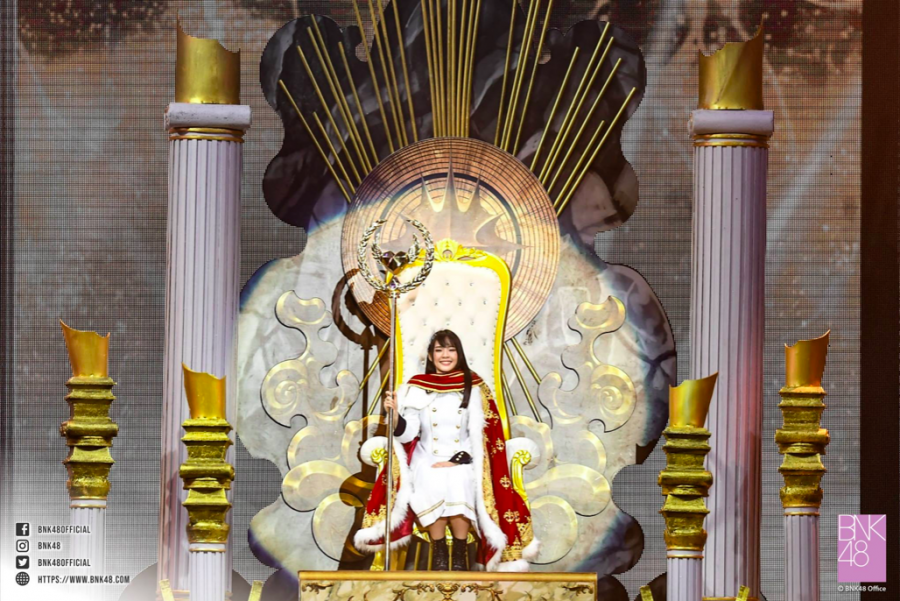 Cherprang Areekul, 22, is anointed as the most popular singer in the girl-group BNK48 at a Bangkok ceremony in early 2019.

The singer with the least number of votes may be relegated to performing in off-hours stage shows, getting mere seconds of screen time in music videos and, ultimately, so little fame that she may go unrecognized at the mall.

BNK48’s reigning singer — Cherprang Areekul, 22, now one of the most popular entertainers in Thailand, period — once described this culling process as “brutality.”

“It’s like … we have to slaughter our friends,” she said in an authorized BNK48 documentary titled “Girls Don’t Cry.” In the film, which features personal one-on-one interviews, BNK48’s less-popular singers actually cry quite a bit, largely over their sense of inadequacy — and their struggle to embody the manufactured cuteness expected of a pop idol.

“To be honest, I just don’t see myself as a super cutesy person,” said 16-year-old BNK48 member Suchaya “Jib” Saenkhot in the documentary. “Like, if you try to make me meow like a cat, I really can’t stand it.”

Each satellite in the AKB48 system is run by an office that not only manages the group’s profits but also dictates a certain code of behavior. Singers in BNK48, for example, must sign six-year contracts, allow management to control their social media accounts and abide by an unwritten prohibition against dating boys, which can shatter the fantasies of hardcore fans.

(Repeated attempts to schedule an interview with BNK48’s management team were unsuccessful.)

The exact financial practices of AKB48 groups aren’t public — and may vary by group — but Nutthapong believes singers receive a base salary along with extra compensation for appearing at live events or in advertisements. In Thailand, for example, BNK48’s image is used to promote everything from perfume to Toyotas to soy milk.

AKB48’s foreign franchises are increasingly assuming their own country-specific vibe. In the devoutly Catholic Philippines, MNL48 in Manila has created a “gospel unit.” In Muslim-majority Indonesia, JKT48 in Jakarta observes cultural norms by not using their left hands to greet fans at handshake events.

BNK48 exudes sanuk, a difficult-to-articulate Thai concept meaning “carefree fun.” None of the acts in Southeast Asia, a region that generally skews a bit more conservative than Japan, have followed their AKB48 sisters by posing in swimsuits.

The latest satellite will be MUM48 out of Mumbai, India. Though it has yet to debut, MUM48’s promoters have announced that they’re currently auditioning “girls with spark.”

All you wonderful Girls out there, get ready!!
MUM48 is here and it brings with itself an opportunity for you to chase your dreams and shine.
For further information visit https://t.co/6BR1iDNlSd@sharmarashmi20 @2795_tani @Sanjjeevk pic.twitter.com/pGWPit6pv7