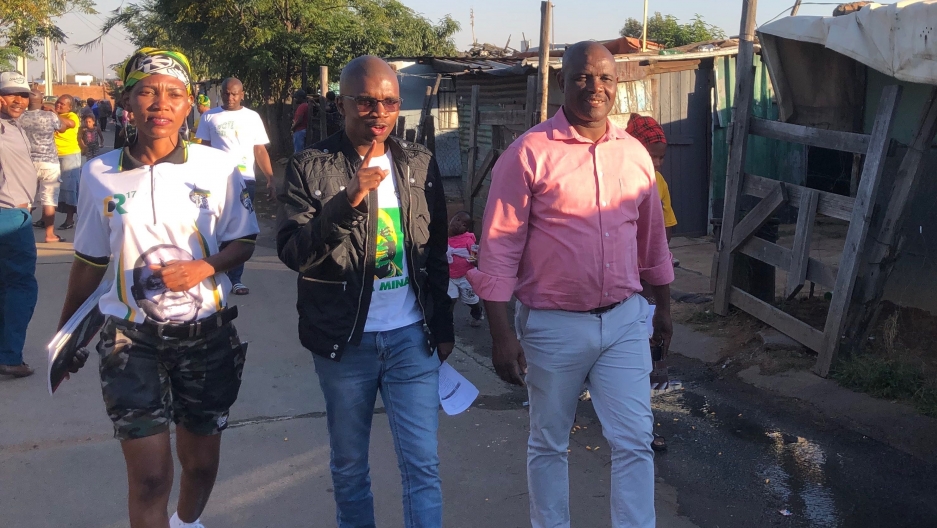 Collen Malatji, in the black jacket, is pictured with his ANC colleagues.

Collen Malatji walks down a dirt street that runs through the middle of Dukathole, a township on the outskirts of Johannesburg. It’s early evening, and workers from a nearby factory are wandering home as kids in a sports field kick a few balls around.

Malatji, 26, points out some of the problems people are facing in this old neighborhood. Not enough electricity. High unemployment. Illegal buildings. Crime.

“This is the mining belt,” he said, referring to the gold mines that sprung up around Johannesburg in the late 19th century. But most of the big mining operations that used to employ people here are gone, he says. “The people who took the gold went overseas and left us with a problem.”

Related: South African lawyer is first woman with albinism on Vogue cover: ‘The way I look is enough’

There’s a day to go before South Africa’s national elections on May 8, and Malatji, the African National Congress’ youngest parliamentary candidate, is trying to convince people in Dukathole to get to the polls and vote for the party that has governed South Africa for the past quarter of a century.

He stops a man wearing a red Coca-Cola baseball cap in the street and introduces himself. It only takes a moment before he and the man are locked in conversation about whether the governing party is doing enough about the growing problem of drug addiction among young South Africans.

Diving into intricate policy debates with strangers is not something most 20-somethings would be comfortable doing. But Malatji has been involved in ANC politics for half his young life. If elected, he’ll be the youngest member of parliament in a party that many young South Africans say is out of touch with their problems.

“There are too many old politicians in South Africa. We’re trying to change that.”

“There are too many old politicians in South Africa,” he said. “We’re trying to change that.”

Related: Survivors of sexual violence in South Africa are finally finding their voices

Almost exactly 25 years ago, South Africans voted in the country’s first free, multiracial elections on April 27, 1994, ushering in Nelson Mandela as the country’s first democratic president. The ANC, the party that Mandela led and which fought for decades against apartheid’s system of racial segregation, has been in power ever since.

But support for the party has slipped in recent years. Former President Jacob Zuma, who was in office from 2009 until 2018, was ensnared in several high-profile corruption scandals, including using taxpayer money to upgrade his personal estate and, more recently, allegedly giving a rich business family unprecedented access to government ministers and contracts.

Zuma has always denied any wrongdoing, but the economy sputtered and support for the party dropped during his tenure. The party saw its worst-ever electoral performance in municipal elections in 2016, and in an attempt to regroup before this year’s vote, the ANC leadership forced Zuma to step down last year. President Cyril Ramaphosa, a respected businessman, took his place and is now campaigning across the country, promising to reform the party and turn the country’s economy around. “Let’s Grow South Africa Together,” say ANC posters adorned with Ramaphosa’s face, which can be found all over the country.

Even if they’re frustrated with the ANC, many older South Africans can’t imagine not voting for the party that fought relentlessly for the freedom of black South Africans for most of the 20th century.

But South Africans younger than 25 — often referred to as the born-free generation — didn’t directly experience the brutality of apartheid and instead see a government that is failing to deliver on the promises of equality they were raised to expect. Today, South Africa is the most unequal society in the world, according to the World Bank. Higher education is too expensive for many students, and even if they can afford it, finding a job after college is a serious challenge. Last year, unemployment for people under 25 reached over 54%.

Malatji, who grew up in a township outside Johannesburg called Tembisa, thinks it is up to young people to fight these problems by becoming more active in the nation’s politics, and not just complain about them.

“Politics is everything. Soccer is politics. Your life is politics. You cannot be ignorant and not be part of such things that affect your life on a day to day basis. ... As young people, we must take responsibility for our own future.”

“Politics is everything. Soccer is politics. Your life is politics,” he said. “You cannot be ignorant and not be part of such things that affect your life on a day to day basis. ... As young people, we must take responsibility for our own future.”

On Friday, five days before the polls, he helped organize a jobs fair for youth at the Dukathole sports ground. Dozens of people lined up at kiosks on a grassy field where a few government programs to help match job seekers with available positions had been set up. Even South African Airways had a booth where people could learn about what it would take to work at the national carrier.

The turnout for the event was good, but some attendees were skeptical about whether or not anything would come of it. A few people said they were worried about scams where they might have to pay to get a job, which they’ve seen in other parts of the city.

“I have been looking for a job, but nothing. Nothing,” said Nobuhle Maseti, 23, who came to the job fair with her older sister, Musa Maseti. Both women and their mother, who they live with, are out of work.

“Sometimes, if we go looking for a job, they say we must pay some money, and we don’t even have that money to pay,” Musa Maseti said. “So, it’s hard to get a job.”

Opposition parties have not missed the opportunity to court young, frustrated voters, promising to deliver more jobs and run a cleaner government. The radical, left-leaning Economic Freedom Fighters, led by the controversial and charismatic Julius Malema, has been the most outspoken about the need to level the playing field between black and white South Africans — and is expected to be the only of the three major parties to increase its vote share in this week’s elections.

“The EFF is talking the truth,” said Romeo Khoza, a 26-year-old job seeker who attended the fair. He says he used to support the ANC, but he’s lost faith, and thinks that other young, unemployed voters like him have, too.

“South Africa is going down,” said his friend, Thandolhuhle Nogumbe, who is 23 and also looking for work. “Without youth, there’s no future.”

This kind of deep-seated frustration shared by many; a recent survey found nearly 70% of South Africans said the country was moving in the wrong direction, according to polling group Afrobarometer.

Even Malatji, though he chooses to work within the system, thinks the government is taking too long to resolve the gross imbalances that the democratic government inherited from apartheid.

“We need to resolve the injustices of the past, and we need to do it fast,” he said. “People are losing patience.”