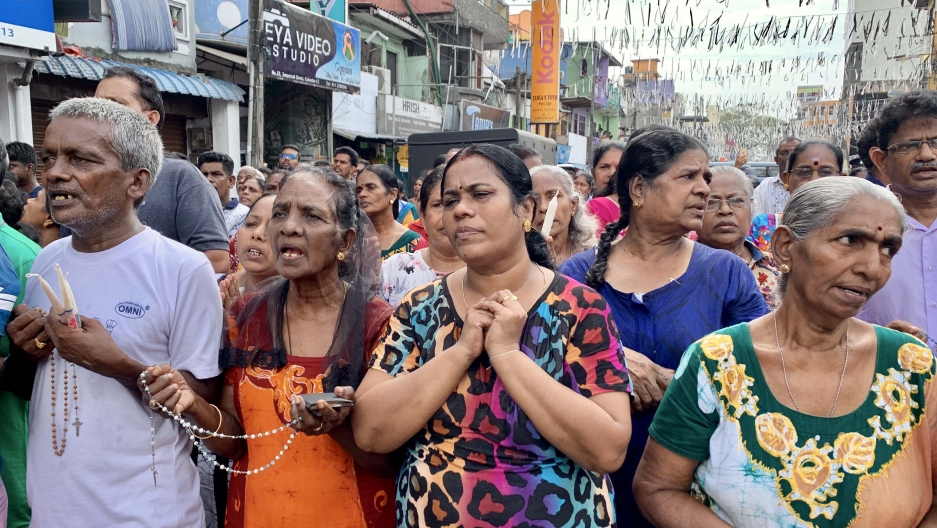 The bells tolled at 8:45 a.m. at St. Anthony's Shrine in Colombo, Sri Lanka, on Sunday. This was the same time a suicide bomber detonated explosives during Easter Mass one week before, killing and injuring worshippers. More than 250 people were killed during the attacks on hotels and churches on April 21.

Today, St. Anthony's is in ruins. The streets around it are strung up with white memorial banners. The police and army have set up barricades and checkpoints to search anyone who tries to come close to the church.

Sri Lankan security officials have warned that Islamist militants behind Easter Sunday's suicide bombings are planning more attacks and could be dressed in uniform, as the archbishop of Colombo complained about insufficient security around churches. 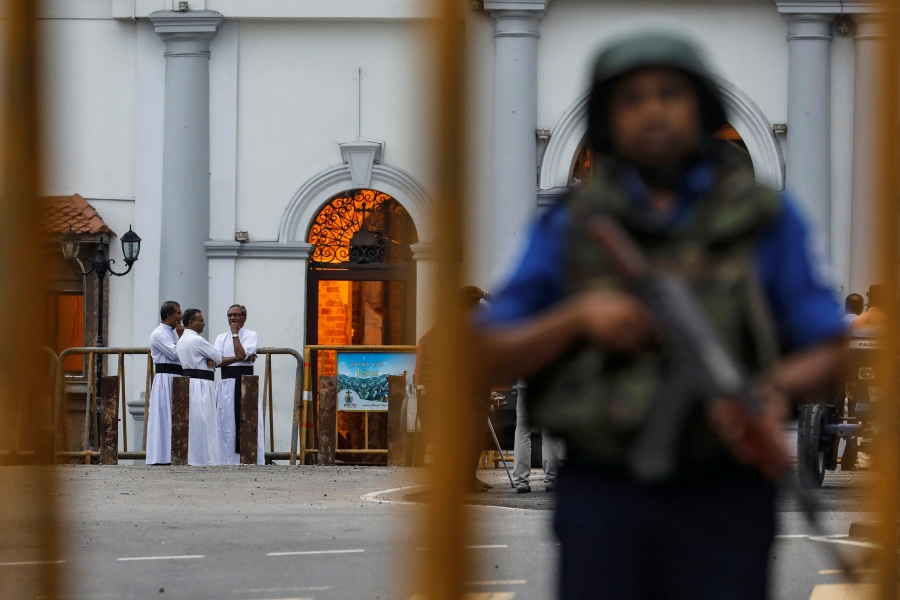 Priests are seen in the background as a security personnel stands guard in front of St Anthony's Shrine days after a string of suicide bomb attacks across the island on Easter Sunday, in Colombo, Sri Lanka, April 29, 2019.

"There could be another wave of attacks," the head of the police ministerial security division said in a letter to lawmakers and other officials seen by Reuters on Monday.

The militants were targeting five locations for attacks on Sunday just passed or on Monday, security sources said.

Behind strips of yellow police tape, a crowd prayed outside St. Anthony's. Many held candles and rosaries, wiping away tears.

Darshika Fernando was in the crowd with her mother, Marina Fernando.

"She can't bear the pain," Fernando said of her mother. "She is 50. From the day she [was] born, she lives here, so she grew up in this church."

Darshika Fernando said people of different faiths have always been able to get along in her neighborhood. "In this church, in this community area, we have Hindu temple, mosque, everything, Buddhist temple. So, usually, we live together here. We don't have separate regions, and we live together here."

Darshika Fernando says she's inspired by the words of the Catholic Archbishop of Colombo, Malcolm Ranjith, who has urged Sri Lankans not to blame one another for the attacks. "That no one is responsible for this,” Darshika Fernando said. “We can't blame anyone for this kind of situation."

But Ranjith has said that security had not been sufficiently stepped up around churches.

“We are not satisfied with the security arrangements and urge authorities to ensure our safety," he told reporters.

Priests are seen in the background as a security personnel stands guard in front of St Anthony's Shrine days after a string of suicide bomb attacks across the island on Easter Sunday, in Colombo, Sri Lanka, April 29, 2019.

There have been explosions throughout the week. Sometimes, it was the army blowing up an unattended package or motorcycle. On Friday night, on the east coast of Sri Lanka, three bombers set off explosives during a firefight with police. Fifteen people died, including six children. In another raid that same night, police found a massive cache of more bombs and a black ISIS flag. Police say the discovery averted a potentially disastrous attack, but it also highlighted the ongoing threat in the country.

Politicians are calling for hard-line measures to crack down on extremism, including banning the groups that pledge allegiance to ISIS and carried out the attacks, freezing bank accounts linked to terrorists organizations, and seeking the death penalty for terrorists. They have also implemented a controversial ban on Muslim women wearing face veils.

There were concerns within the Muslim community that the ban could fuel tensions in the multiethnic nation. But government officials said it would help security forces identify people as a hunt for any remaining attackers and their support network continues across the Indian Ocean island, which was gripped by civil war for decades until 2009. 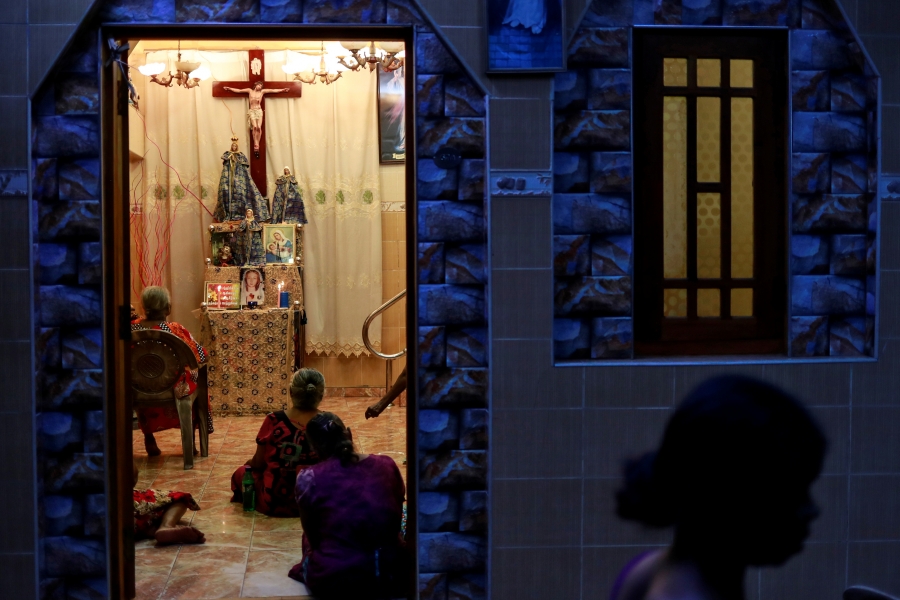 Residents pray in a prayer house near St. Anthony's Shrine days after a string of suicide bomb attacks across the island on Easter Sunday, in Colombo, Sri Lanka, April 29, 2019.

As parliament debates and adopts measures, Sri Lankans are trying to move forward.

"We have started renovating the church again after the destruction,” said Rev. Jude Fernando (no relation to Darshika Fernando and her mother, Marina Fernando), the parish priest at St. Anthony's.

Politicians and religious leaders are straining to prevent the kind of retributive violence that has marred interfaith relations in recent years.

"The Buddhist monks were here to keep the solidarity at this moment of grief as one week has passed. They were here to show their concern, so we appreciate their presence here."

"The Buddhist monks were here to keep the solidarity at this moment of grief as one week has passed," Rev. Fernando said. "They were here to show their concern, so we appreciate their presence here."

In Sunday's memorial, he spoke of countering hate speech and bigotry with a message of coexistence and unity. "I think we need to work hard for peace and harmony. What is lost we need to bring back."

Inside St. Anthony's, the Sri Lankan Navy is helping out with the cleanup, lugging bags of rubble and washing blood from the walls.

And parishioners like Darshika Fernando and her mother are looking forward to returning.

"We want to go inside the church again. That's the thing. And we want to pray for the souls which we have lost."