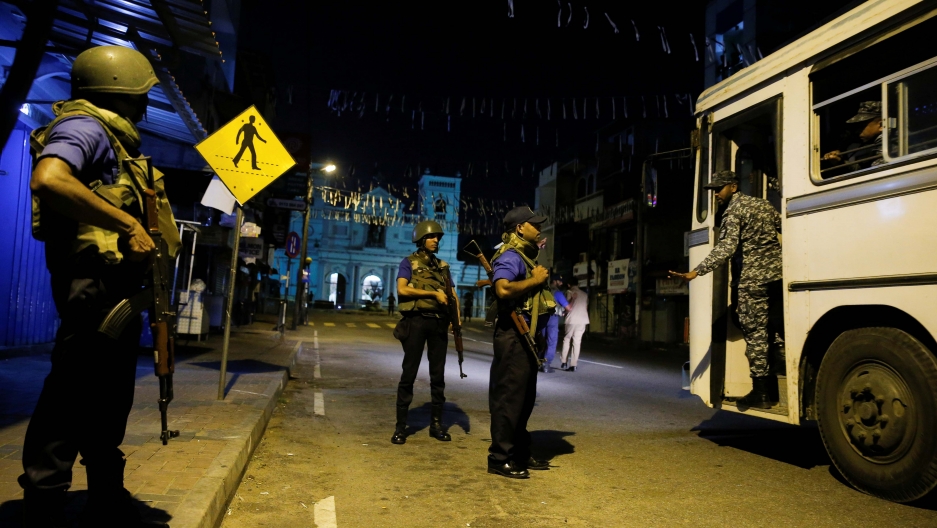 Security forces stand guard at St. Antony shrine days after a string of suicide bomb attacks on churches and luxury hotels across the island on Easter Sunday, in Colombo, Sri Lanka, April 24, 2019.

A picture has emerged of a group of nine, well-educated, homegrown suicide bombers in the Easter Sunday attacks in Sri Lanka. Two were brothers, sons of a wealthy spice trader and pillar of the business community, a source close to the family said.

ISIS has claimed responsibility for the attacks, and authorities have focused their investigations on international links to two domestic Islamist groups — National Thawheed Jama'ut and Jammiyathul Millathu Ibrahim — that they believe carried out the attacks. The government said there were nine suicide bombers, eight of whom had been identified. One was a woman.

"Most of the bombers are well-educated, come from economically strong families. Some of them went abroad for studies," Sri Lanka's junior defense minister, Ruwan Wijewardene, told a news conference. "One of them we know went to the UK, then went to Australia for a law degree."

The relative weath of the suspects and their family ties have drawn attention, but are part of a trend in extremist jihadi groups. Mia Bloom, an expert on extremism at Georgia State University, spoke with The World about the attacks in Sri Lanka and broader patterns in terrorist movements.

"One of the standard operating procedures for the jihadi groups is to use members of the same family."

Mia Bloom: One of the standard operating procedures for the jihadi groups is to use members of the same family. We had the Tsarnaev brothers in Boston. We had the Kouachi brothers in France. In the Dubrovka Theater attacked by the Chechen [rebels] in 2002, there were 19 suicide bombers and there were as many as 11 sets of siblings. So, the sibling connection is a hallmark not just of terrorist groups in general, but it is particularly embraced by these jihadi groups. They do that for a variety of reasons, but one is to maintain operational secrecy. They know that the brothers are not going to rat out on his brother or sister, but also they're not going to change their mind at the last minute and thereby disappoint their sibling.

Marco Werman: What about the apparent affluence of these suspected attackers — did that surprise you?

"While we tend to associate the ills of poverty as maybe one of the reasons for radicalization, in fact ... we often see people not only who are disproportionately educated, but also quite wealthy."

You may be familiar with the late Alan Krueger who was an economics professor at Princeton University. In 2002, Krueger co-authored a piece showing how there was a reverse or an inverse relationship between poverty and terrorism. While we tend to associate the ills of poverty as maybe one of the reasons for radicalization, in fact, if you look at the 9/11 bombers or if you look at terrorists in general, we often see people not only who are disproportionately educated, but also quite wealthy. So, it shouldn't surprise people. The other part of it is the 32 Sri Lankans who joined ISIS — many were doctors or engineers. And the last bit of information is there's a fantastic book by Diego Gambetta [and Steffen Hertog] called "Engineers of Jihad," which shows that the jihadi groups disproportionately attract educated people in the hard sciences.

It's still not clear if the bombers were actually ISIS or just inspired by ISIS. What do you think the evidence points to?

I've spent the last 3 1/2 years studying ISIS propaganda. We collect the propaganda every single day. There are certain kinds of markings and branding on ISIS propaganda videos that show that it's definitely ISIS directed. ISIS was very slow to claim the attack compared, to say, the attack in Bangladesh or the attack against the Iranian parliament in those attacks — which were directed — the attackers had GoPro cameras on, and you could watch the attack in real time and ISIS was disseminating this. This was slower. And so, I can feel fairly confident it was ISIS inspired. This also is one of the things that ISIS discussed as it was losing its territorial caliphate. It has been preparing the expansion, this notion of inspiring, you know, jihadis around the world. It's one of the reasons why they post how-to videos — not just how to build a bomb, but in a stabbing, where to stab on a person's body, that's going to cause the most damage. And of course, as the caliphate territorially has declined, they have increased their desire to project their power throughout the world.

What do you think the highly organized nature of the attacks in Sri Lanka tells us about this group? I mean, multiple cities several different targets?

In order to have a coordinated attack of this sophistication, you need more than a handful of days. I was a little circumspect about blaming Christchurch because the first warnings came to the Sri Lankan government from the NIA in India, their intelligence agency, April 4 and Christchurch happened March 15; you need more than 2 1/2 weeks to plan an operation of this scale. My suspicion is that the attacks were originally planned against Buddhist targets. There had been some sectarian violence against the Muslim communities in late 2018 because there had been defacings of Buddhist statues that led to rioting against the Muslim communities in Sri Lanka. But then after Christchurch, it was switched. Instead of going to a Buddhist temple, they send them to a church and then they coordinate it for maximum carnage the morning of Easter.

So, the suspected attackers in Sri Lanka (because of what we know now) probably had resources, right? They had money. How does that change the narrative of planning this coordinated attack?

"But we also know from 9/11 that the most expensive elements of 9/11 were the airplane tickets."

Well, if the individual bombers themselves come from families with means, they don't necessarily need to have money coming from outside. I think that's going to be one of the things that the Sri Lankan security services are going to have to look at. Were they self-funded because they were coming from wealthy families? Or did they get some startup money from abroad? But we also know from 9/11 that the most expensive elements of 9/11 were the airplane tickets. The bombs themselves are not necessarily expensive to fabricate, especially if you have access to the explosive materials. One of the things that has been suggested is that because Sri Lanka has a long history with suicide bombing with the Tamil Tigers that maybe this technology or know-how was fairly widespread.

Do you think Islamic extremism and far-right extremism are starting to feed off each other?

I mean, it is really interesting to see the overlap, but I also think that there's a call-and-response, because the moment you have an extreme, right-wing [terrorist group] conduct an operation which will incentivize jihadis to conduct an operation which then justifies the extreme, right wing's xenophobia, hatred of refugees or hatred of Muslims, I call that outbidding. It just goes back and forth and keeps ramping up with every iteration and these echo chambers are really feeding off of one another.