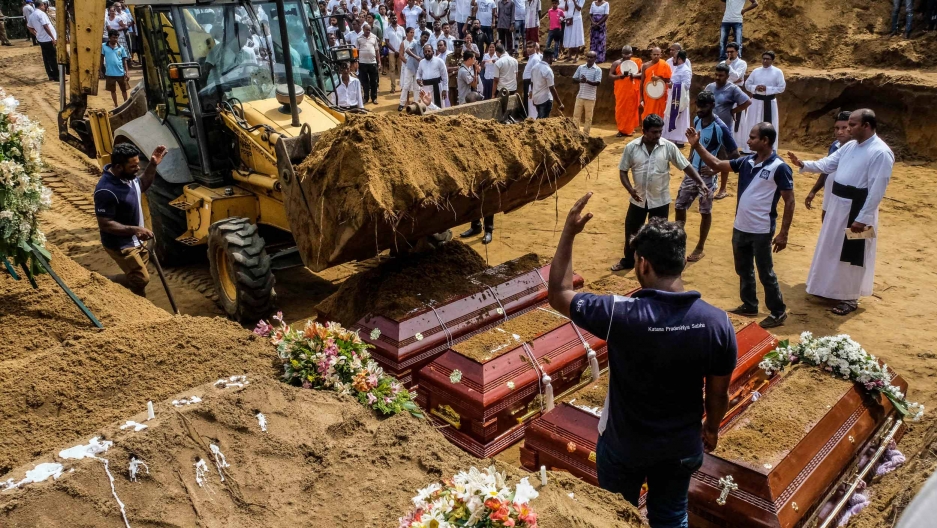 The village of Katuwapitiya prepares mass graves in the wake of the Easter bombing that killed 100 inside St. Sebastian church.

In the village of Katuwapitiya on the island of Sri Lanka, everyone knows each other. Villagers worshipped together at St. Sebastian church.

And on Easter Sunday, more than 100 of them died together.

Pradeep Thushantha holds a photograph of his family. They’re sitting on the steps in front of the altar at St. Sebastian church, which was attacked by a suicide bomber on Sunday. The photograph is a few years old. It was taken on the day his youngest son was baptized. 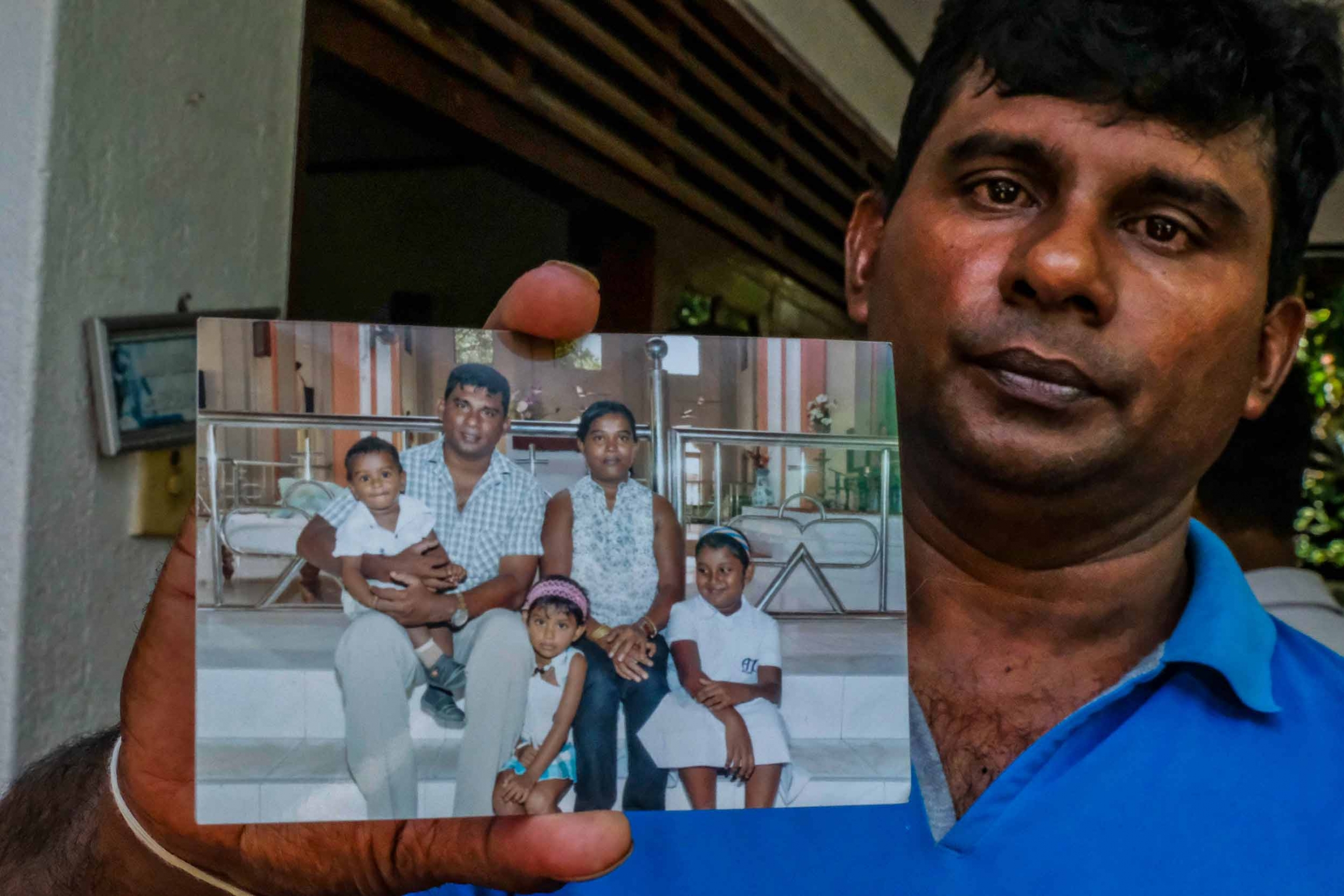 Pradeep Thushantha holds a photograph of his family on the steps of the St. Sebastian church. His entire family was killed during the Easter bombing at the church on Sunday.

The church is just a few minutes walk from their home. Last Sunday morning, Pradeep’s three children and his wife went to mass.

On Tuesday, they laid in open caskets in his living room.

Tuesday is a national day of mourning in Sri Lanka after coordinated attacks on Sunday killed more than 321 and wounded more than 500. 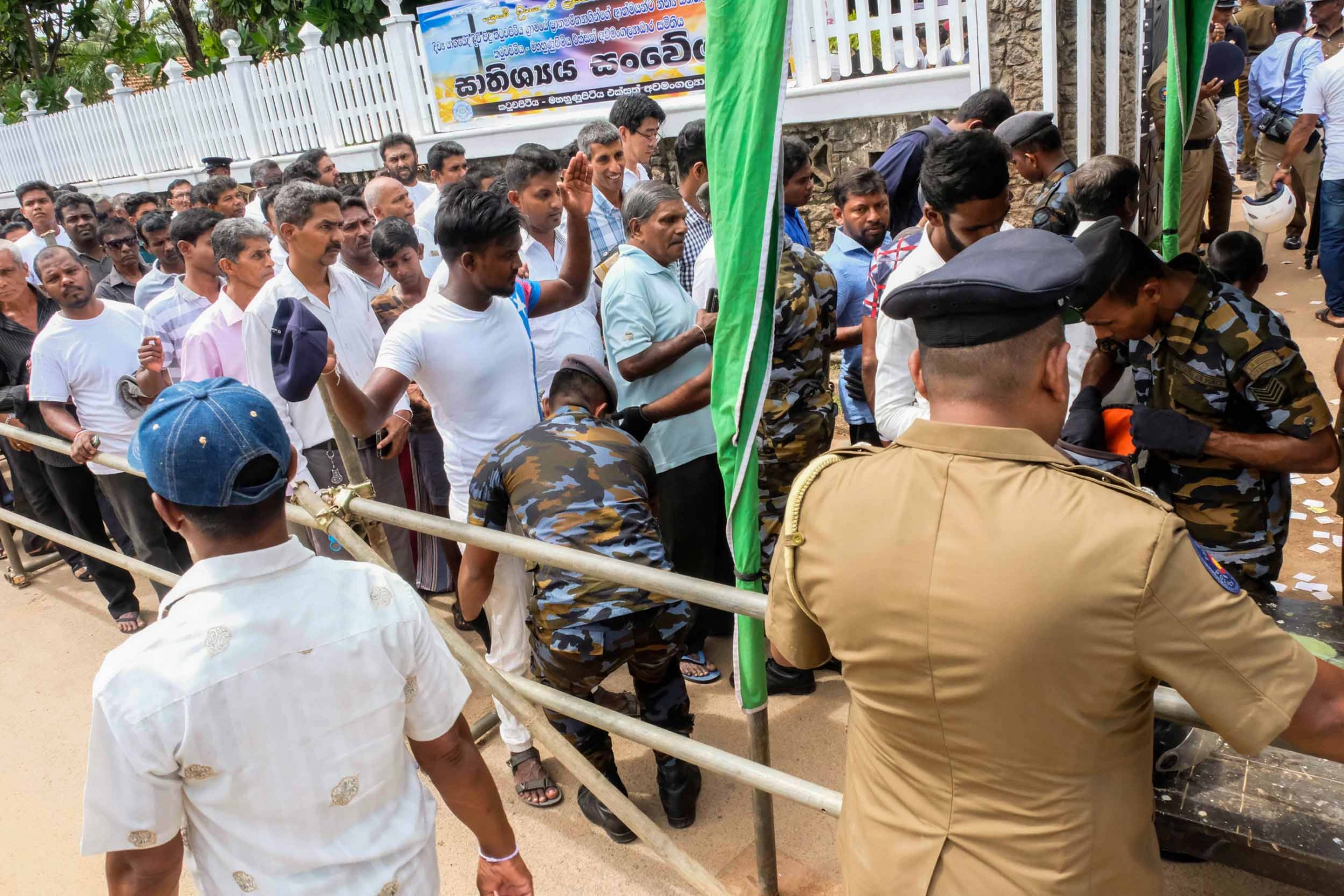 Mourners wait to be screened by security before attending a mass funeral in Katuwapitiya.

In a statement, ISIS named what it said were the seven who carried out the attacks. It gave no further evidence to support its claim of responsibility.

The church of St. Sebastian is scarred by shrapnel, the pews are shattered and the windows are blown out. But behind the church, under an improvised tent, hundreds of people gathered for a mass.

At the cemetery down the road, a pair of bulldozers have dug a large pit for the mass burial. About 30 victims of the bombings will be buried here on Tuesday. 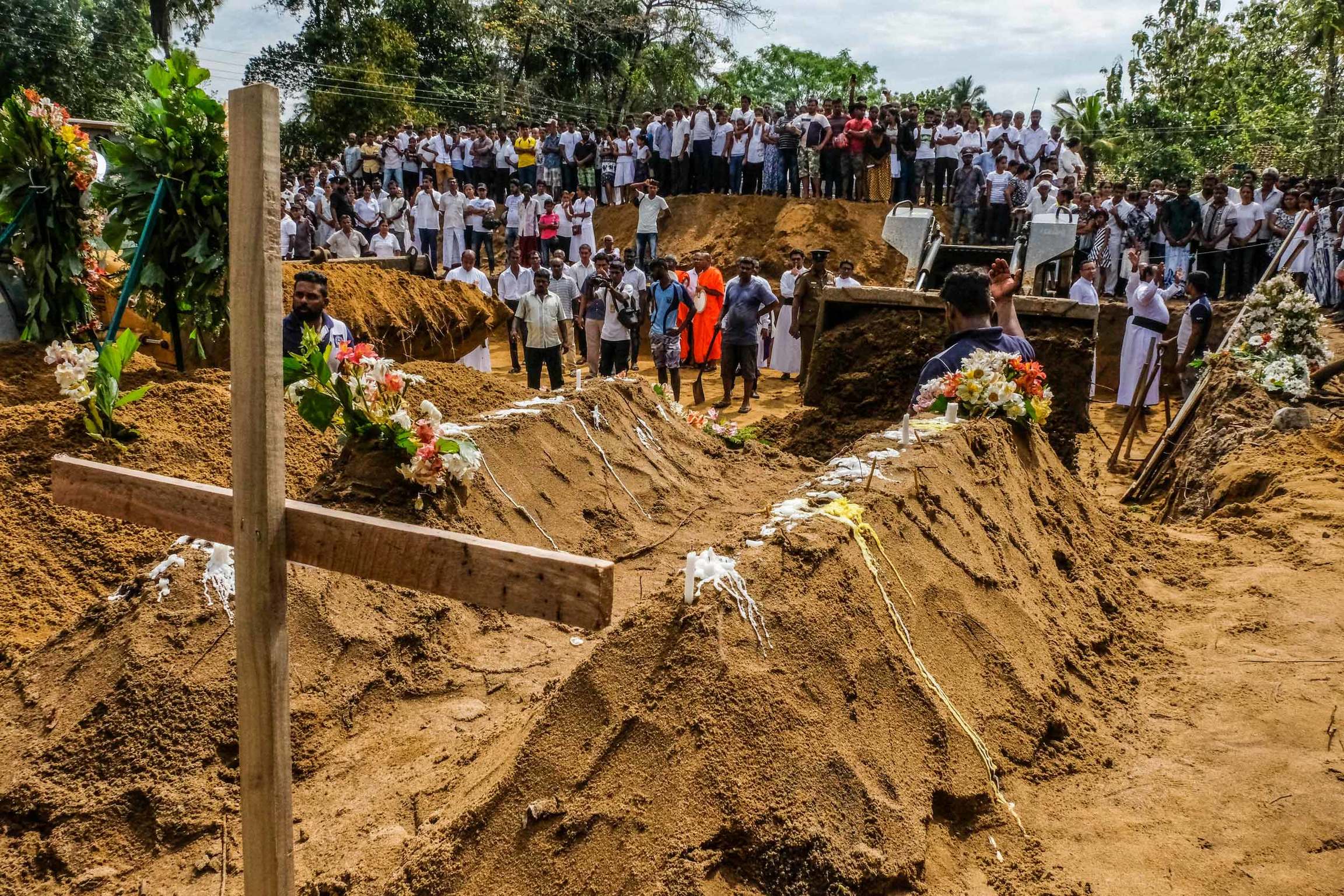 Crowds of mourners watch as people are buried behind the St. Sebastian church in the village of Katuwapitiya, Sri Lanka.

The house next to Thushantha’s belongs to his wife’s brother. He died too, along with his two children.

His wife, Kumari, was the only survivor. She was injured in the blast and spent three days in the hospital. She came home for the first time since the bombing to her family in caskets in her home. 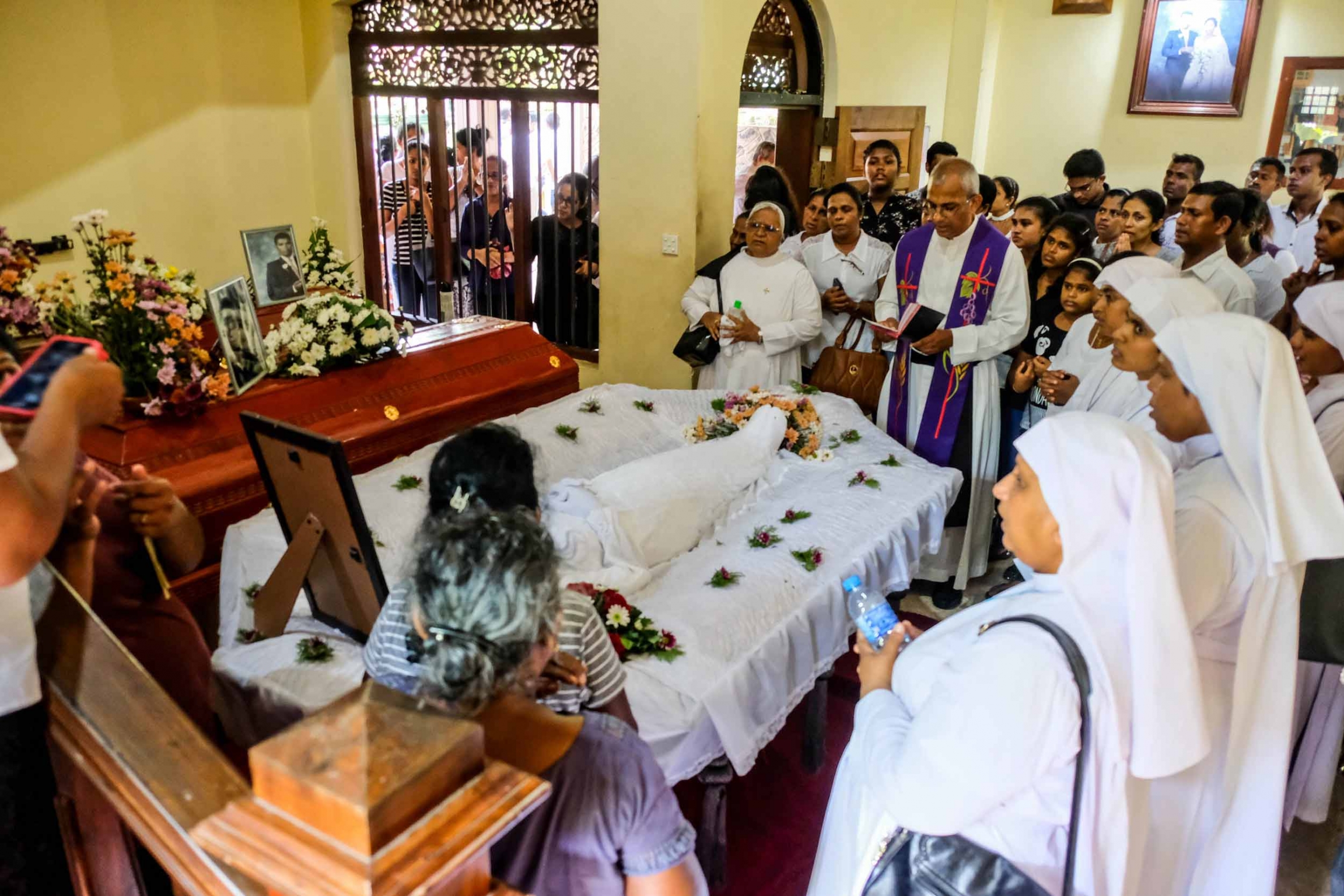 Father George Fernando prays over the caskets of 19-year-old Sajini, her 15-year-old brother, Vimukti, and their father, Dulip.

Crowds of people from the village came to pay their respects. 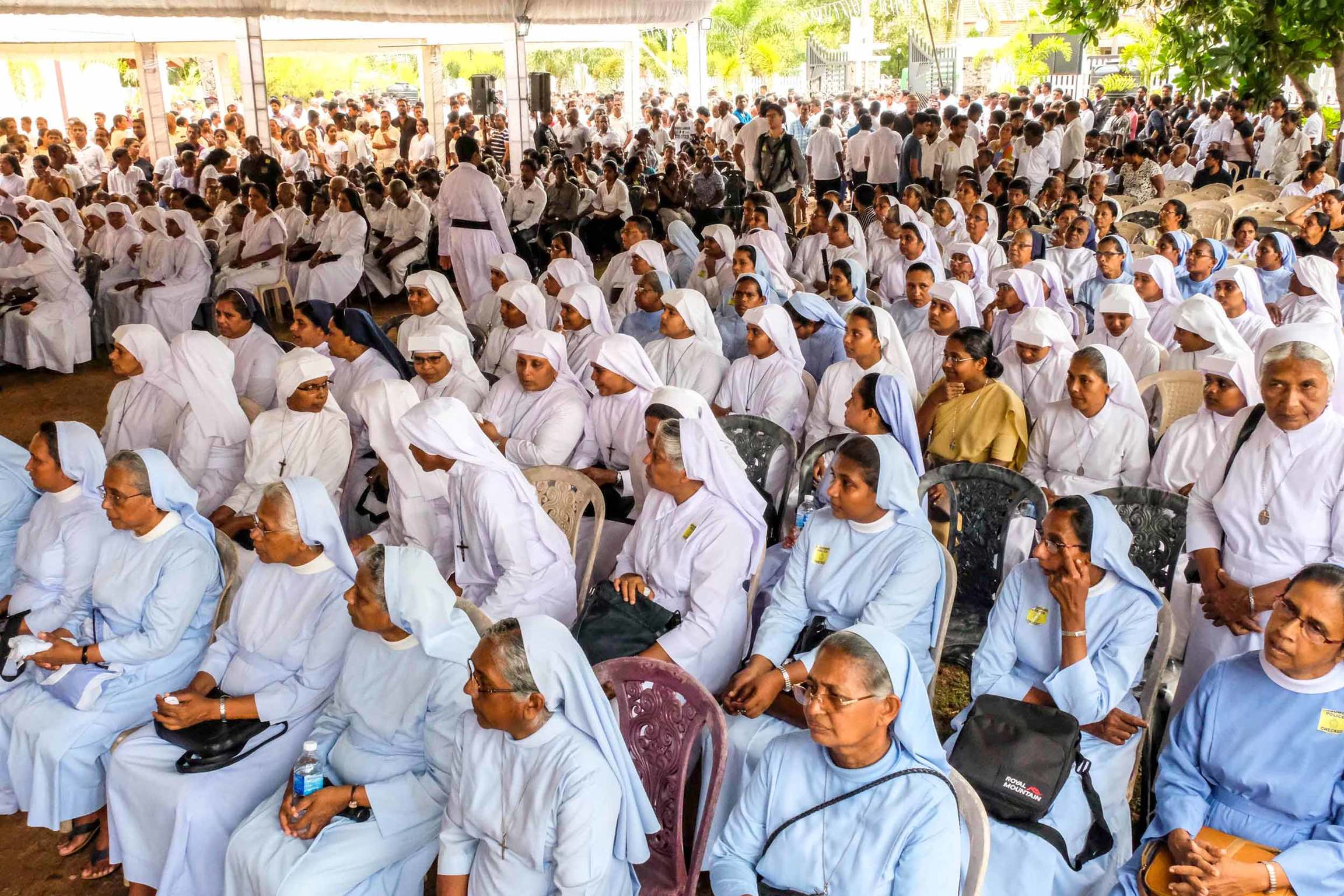 Mourners gathered under a large tent behind the destroyed church for mass funerals.

They prayed and sang.

And together, a village in grief said goodbye to dozens of people in a single day. 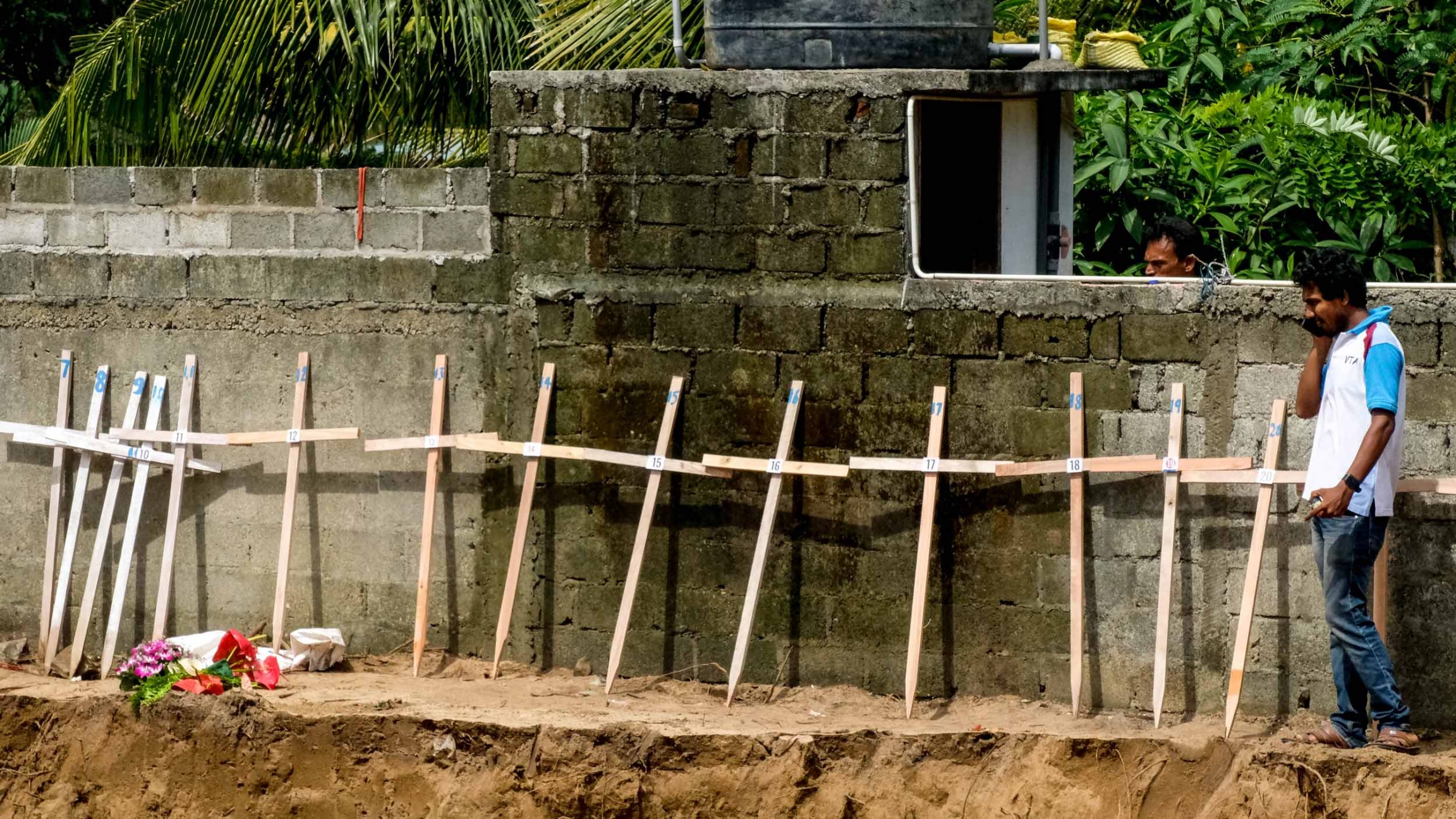 Simple wooden crosses are laid out in a line in a cemetery near St. Sebastian church, where more than 100 worshippers were killed during Sunday's Easter bombings in Sri Lanka.