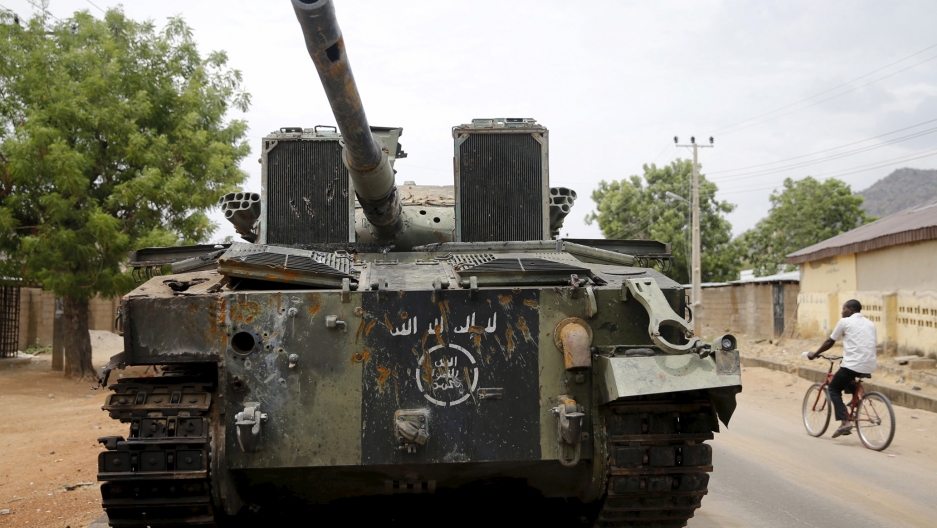 An armored tank is seen abandoned along a road in Bazza town, after the Nigerian military recaptured it from Boko Haram, in Adamawa state, May 10, 2015.

Last November, when Boko Haram militants raided an army base in Metele, a village in northeastern Nigeria’s Borno state, the deaths of dozens of soldiers sent shockwaves across the country. The nation thought it was winning the war against Boko Haram and Islamic State West Africa province, its splinter group.

In the run-up to national elections, critics blamed incumbent President Muhammadu Buhari — elected on a promise to put an end to Boko Haram — for the attack. He and his government downplayed the carnage and warned against “fake news” being spread by extremists.

Politicians rowed over reasons for the attack, citing weak strategy and underpaid, ill-equipped troops. But the debate largely missed an aspect of the raid — one of several that month in Nigeria’s restive northeast — that posed a further threat to security.

Terror groups often make off with weapons belonging to peacekeeping missions and militaries, and a new report released this week tries to measure the scope of the problem.

Each time Boko Haram and ISWAP overpowered a military base, they seized caches of assault rifles and hundreds or thousands of rounds of ammunition they could use in later strikes, fuelling their bloody rebellions.

After Metele, ISWAP gloated about carting away four tanks among other vehicles. The militants replace the striped flags with Boko Haram’s black-and-white logo. Such hauls raised the group’s prowess, as well as its firepower.

The problem extends beyond Nigeria, said Eric Berman, director of the Small Arms Survey, a research group that released an 81-page study into guns, bullets and other gear ending up in the wrong hands.

The forces — mainly African troops but also European and US militaries — who tackle insurgents in Somalia, the Democratic Republic of Congo, Sudan, Mali and other hotspots have, at various times, lost Kalashnikovs and mortars to the very groups they were sent to fight.

The problem of lost weapons is old, but the quantity lost is greater than many force commanders appreciate, Berman said. This can lead to longer wars with more chaos and bloodshed. 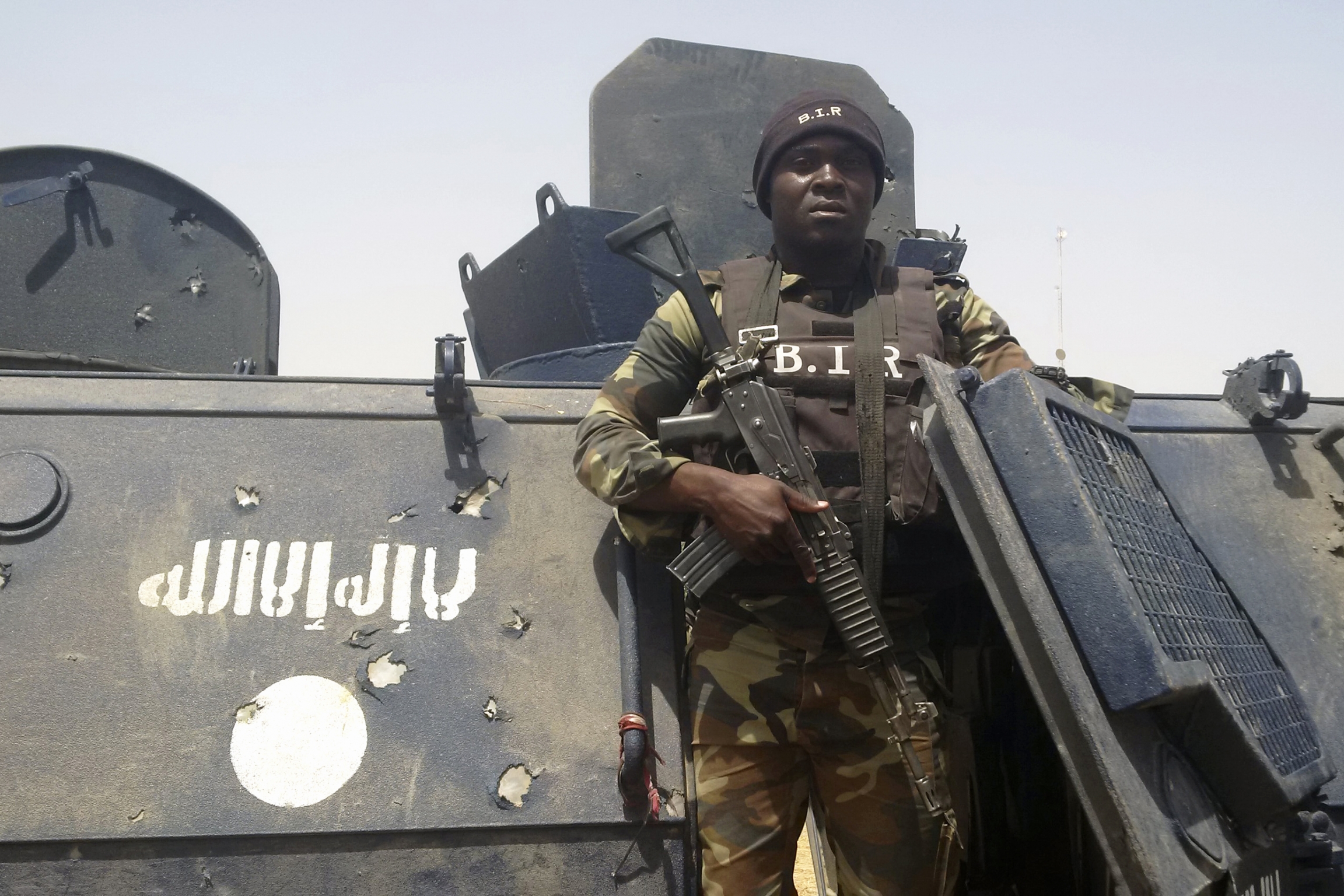 A Cameroonian soldier stands on a Nigerian armored vehicle used by Boko Haram insurgents to attack a Cameroon army patrol near Waza, Feb. 17, 2015.

It’s not just in Africa that these arms are falling into the hands of insurgents. NATO units deployed in Afghanistan have lost fights — and weapons — to the Taliban, the report says. A European Union mission to Libya lost almost 100 small arms and some 40,000 rounds of ammunition to thieves at Tripoli airport in 2014.

“[Counterinsurgency missions] are coming under attack and they’re losing a lot of lives — and weaponry. The armed groups are becoming stronger as a result of the lethal material they claim from peacekeepers who are ostensibly there to defeat them.”

“They’re coming under attack and they’re losing a lot of lives — and weaponry. The armed groups are becoming stronger as a result of the lethal material they claim from peacekeepers who are ostensibly there to defeat them.”

In some cases, entire battalions are overrun, like in Boko Haram’s rout of a military base and 700 troops in Jilli, in Yobe state, in July 2018. In others, rebels hit patrols of a dozen soldiers and make off after loading up with guns and ammo.

Weapons airdrops to resupply peacekeepers can fall into the wrong hands. Convoys are prone to raids. Underpaid soldiers from morale-sapped units have been known to make cash trading guns on the side, Berman said.

The true scale of the problem is unknown — top brass typically keep quiet about missing field artillery. At the very least, “crates and crates” of thousands of weapons and millions of rounds of ammunition have been lost to the bad guys, Berman said.

There are also reports of sniper rifles, field artillery and armored vehicles going astray. Particularly desirable among insurgents are “technicals,” regular civilian off-road trucks that have been fitted with machine guns, rocket launchers or other hardware.

"When a peacekeeping base gets overrun, the raid and its death toll is the headline. ... But somebody also needs to track how many guns, rocket-propelled grenades, ammunition rounds, vehicles, uniforms and IDs are seized and used in subsequent attacks."

"When a peacekeeping base gets overrun, the raid and its death toll is the headline,” said Paul Williams, an expert on security threats at George Washington University.

“But somebody also needs to track how many guns, rocket-propelled grenades, ammunition rounds, vehicles, uniforms and IDs are seized and used in subsequent attacks."

Berman laments little progress since the early 1990s, when Charles Taylor, leader of the National Patriotic Front of Liberia militia, used guns and vehicles swiped from West African peacekeepers in a civil war that claimed more than 150,000 lives.

“A generation later, one would hope we were much better prepared to deal with these environments. But we’ve seen few gains and armed groups continue to secure a lot of material from peacekeepers,” Berman said.

He is particularly vexed by northeast Nigeria, where Boko Haram’s decade-long revolt has spilled across the country’s borders and killed between 27,000-37,530 people and forced some 2 million more from their homes.

ISWAP split from Boko Haram in 2016 and is trying to carve out its own caliphate, with ties to the recently-defeated group in Syria. It is fighting a multinational task force, comprised of troops from Nigeria, Niger, Chad and Cameroon.

A rash of strikes by both groups this past year has been “game-changers” in the conflict, Berman said. The thousands of weapons and hundreds of thousands of rounds of ammunition they have seized will be killing and maiming for some time yet.

Morale is a key factor too: Underpaid troops are more likely to scarper during raids, according to Berman.

Nigerian troops complain about commanders pocketing some of their salaries, not having enough to eat and of Boko Haram fighters having a better kit. “I’m taking a knife to a gunfight,” one soldier told Reuters.

Similar problems exist across the continent, where al-Shabaab rebels have refined the art of getting guns off peacekeepers in Somalia.

Related: As al-Shabab expands, they attract vulnerable youth across all faiths

In June 2015, Burundian troops lost a comparable cache of more than 100 assault rifles, 20 machine guns, anti-tank weapons and mortars when the al-Qaeda-linked fighters attacked them in Leego, southwestern Somalia.

“Al-Shabaab are planned and deliberate. They launch suicide car attacks on Kenyan, Ugandan or Burundian forces at dawn. They’ll recover weapons and use them in future attacks. ... But they’ll sell between a quarter and a half of their haul to businessmen and give that money to their troops as bonuses to boost morale. It’s a big problem that doesn’t get enough attention.” 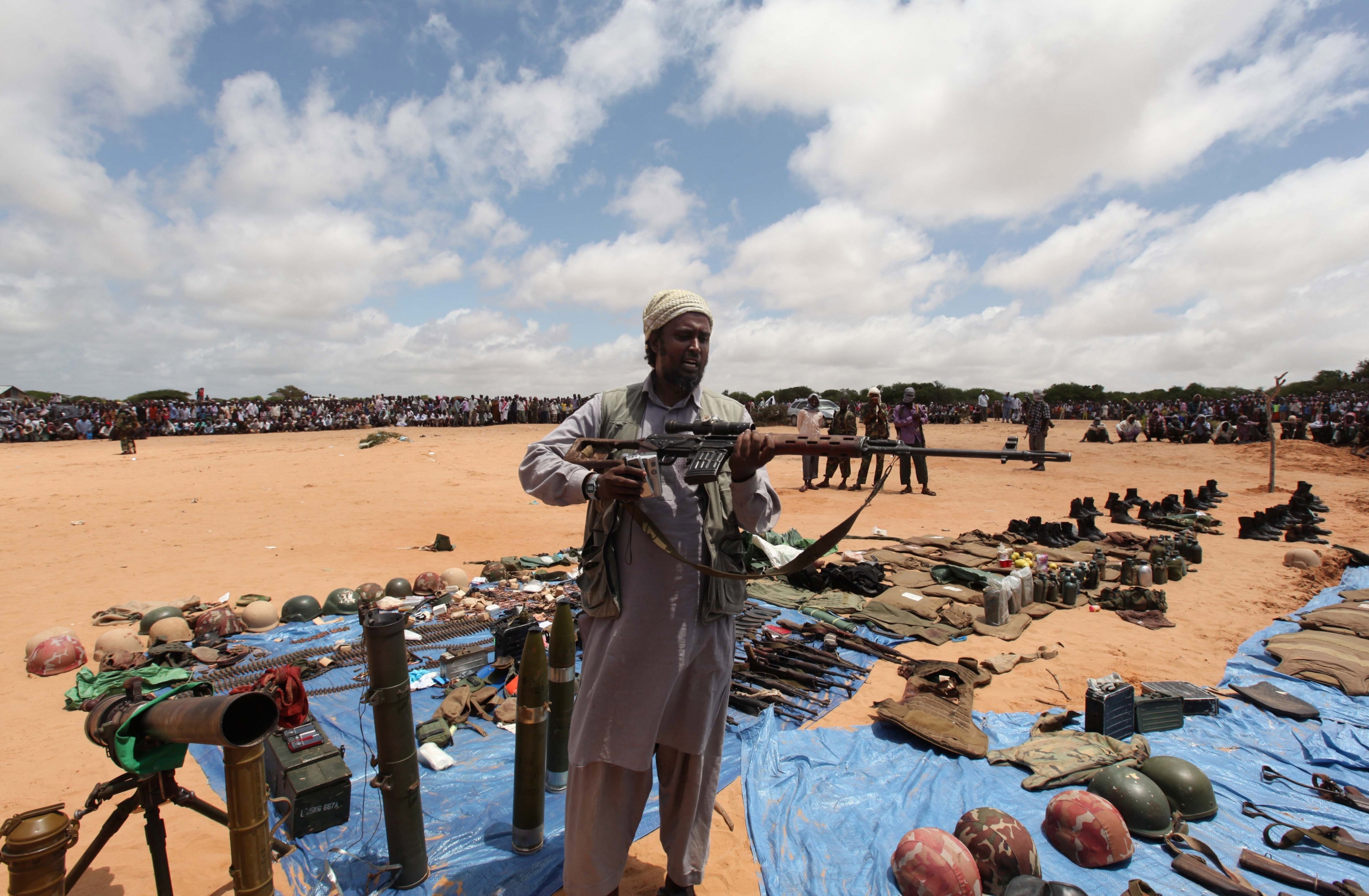 Al-Shabaab spokesman Sheik Ali Mohamud Rage stands among weapons believed to be recovered from Burundian peacekeepers from the African Union suspected to have been killed during fighting in Somalia's capital Mogadishu, Oct. 21, 2011.

“Al-Shabaab are planned and deliberate. They launch suicide car attacks on Kenyan, Ugandan or Burundian forces at dawn. They’ll recover weapons and use them in future attacks,” said Abdi Noor Mohamed, an independent Horn of Africa security consultant.

“But they’ll sell between a quarter and a half of their haul to businessmen and give that money to their troops as bonuses to boost morale. It’s a big problem that doesn’t get enough attention.”

According to Berman and others, it’s a tough nut to crack. In life-or-death battles with insurgents, peacekeepers are already motivated to defend their bases — as well as their lives and their arms caches — when enemies strike.

“Preventing unexpected battle losses is almost impossible for peace operations. ... But they must do more to ensure that arms and ammunition are not diverted or lost through other means, such as abandonment, illicit transfers, corruption and poor management of recovered material.”

“Preventing unexpected battle losses is almost impossible for peace operations,”  Williams said. “But they must do more to ensure that arms and ammunition are not diverted or lost through other means, such as abandonment, illicit transfers, corruption and poor management of recovered material.”

There is no magic bullet to halt insurgencies, Berman added. During civil wars, there is often no shortage of guns and other gear circulating on the black market, and governments have been known to arm the rebels next door.