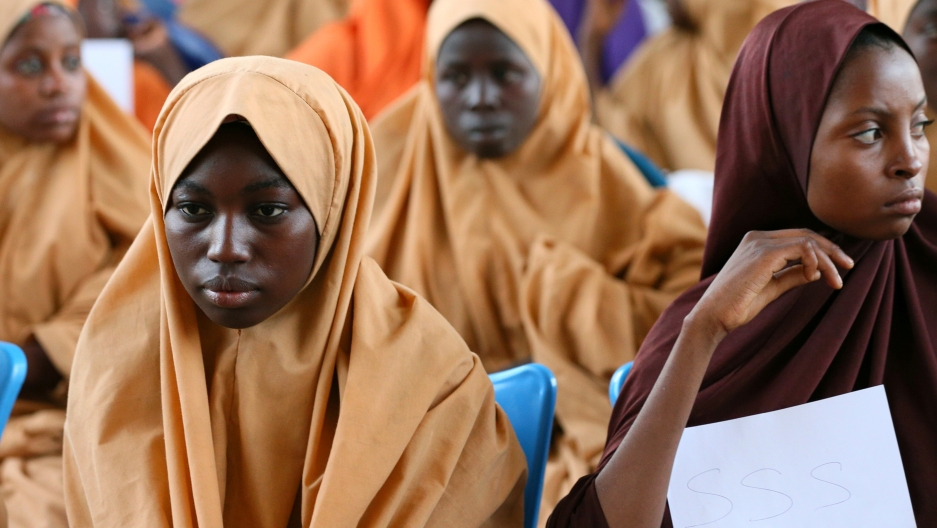 Some of the newly released Dapchi schoolgirls wait to board a plane at the air force base in Maiduguri.

Boko Haram has released nearly all of the 110 schoolgirls they kidnapped in Nigeria last month.

Early Wednesday morning, militants drove several trucks full of students into the town of Dapchi, where they had originally abducted the girls while posing as soldiers.

Nigerian officials have confirmed that 101 girls have returned home, and say it’s the result of the government’s back-channel negotiations, not the payment of a ransom.

By coincidence, there was another group in Dapchi who witnessed the girls coming home — parents of the Chibok girls. Back in 2014, over 200 school girls from the town of Chibok were abducted by Boko Haram, capturing international attention and inspiring the online campaign #BringBackOurGirls.

“The Chibok parents had scheduled to go to Dapchi on a condolence visit,” says writer Adaobi Tricia Nwaubani. The Chibok parents wanted to encourage the families of the newly abducted girls and advise them about how to deal with everything from stress, to dealing with the government and advocacy in international media.

“Lo and behold, they wake up at 7 a.m. only to find that the entire town is running around and everybody’s excited and shouting,” says Nwaubani.

It was a bittersweet experience for some of the Chibok parents watching families reunite in Dapchi.

“One of them told me she wept and wept and wept watching other parents be reunited with their daughters after one month of being in captivity,” says Nwaubani. “Her daughter’s been away for almost four years, and she has no idea of the fate of her daughter.”

You can listen to the The World’s full interview with writer Adaobi Tricia Nwaubani above.