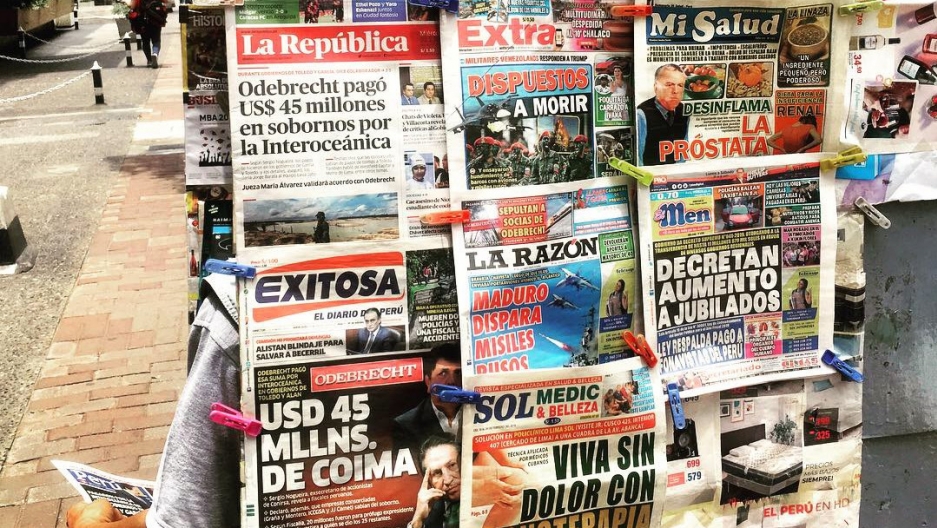 A newspaper kiosk in Lima, Peru’s Miraflores district shows some of the dailies up for sale. Tabloids have a long history in the country's media markets.

When reporters arrived at the home of former Peruvian President Alan García on Wednesday, they thought they were witnessing a van taking him to jail on corruption charges. But that vehicle was actually headed to the hospital. García shot himself before he could be taken into custody; he later died in hospital.

Those facts then entered the vortex that is Peru’s media landscape — and Peru has a complicated news culture that trafficked in fake news long before the term was popularized by Donald Trump.

Peruvian news editor Nelly Luna says the day Alan García died, the “serious media” went to work finding the facts. She says the serious media consist of a handful of Peruvian newspapers, a national broadcast network and Luna’s online investigative site, Ojo Público. The “other media,” she says — the tabloids, TV, and social media sites that traffic in rumors also went to work.

“There’s audio circulating on WhatsApp where an anonymous voice was saying that the ex-president wasn’t dead, that it was all part of a ploy for him to escape justice,” Luna says.

She says that since the former president’s death, there’s been a flood of unverified death-bed photos, doctored audio and rumors published on social media and in tabloids.

The story is a perfect storm for a society that has spent decades dealing with the fallout of a government effort to spread misinformation and sow chaos.

The rise of Peruvian tabloids

It started in the early 1990s when President Alberto Fujimori called for a new constitution and had the military dissolve Congress. He and his intelligence chief, Vladimir Montesinos, then began a campaign to force the media to support him too.

Juan Luis Nugent, a contributor to El Comercio — which many consider Lima’s most trusted newspaper — says from one week to the next, new tabloids created by President Fujimori would appear on stands. Most had bright designs, women in bathing suits, limited articles written in local slang and headlines attacking his opponents. Audiences could no longer tell what was true and what was propaganda. News literacy plummeted. 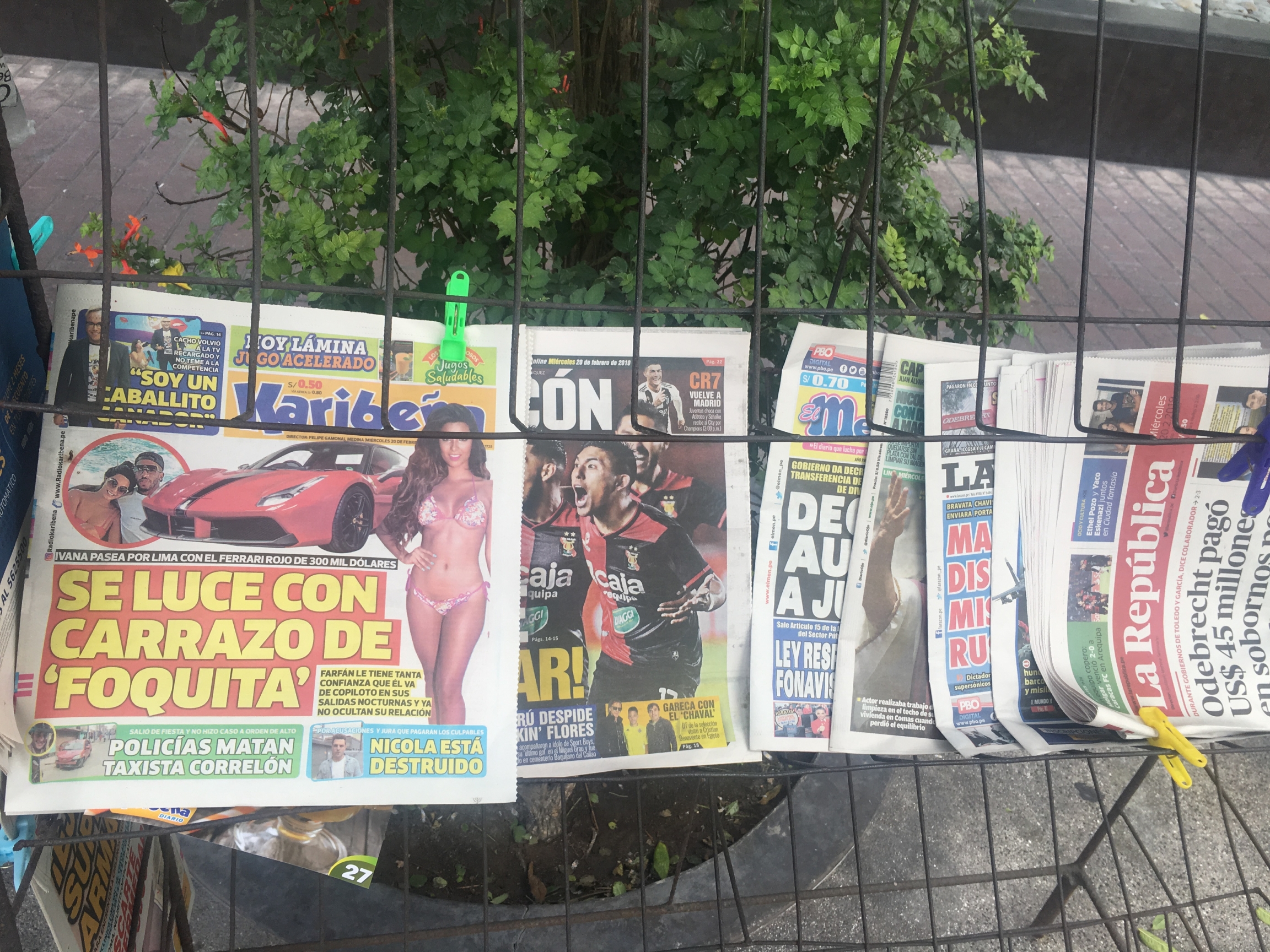 “There's an entire generation of people whose standards for the quality of the information and news they get are really low,” says Nugent. “The bar is so low that it's really really easy to spread lies.”

Nugent says many reporters and prominent news commentators were paid off or threatened into aiding President Fujimori’s fake news campaign. When Fujimori fled to Japan in 2000, those journalists and commentators kept their jobs or went to work for other outlets.

“So, there was actually no punishment and people saw that. People saw that the guy who was spreading lies years ago has his own TV show. So people think maybe he's good,” Nugent adds.

Some Peruvians are still confused as to what to believe. And some have given up on believing anything or anyone, including people like José Mendoza and his sister Graciela, who run a newsstand in Lima’s busy Miraflores district.

On a weekday morning, the pair are huddled in their metal kiosk which is draped with colorful newspapers. Most of the front pages are covered in photos of the last four Peruvian presidents, including García, who was embroiled in a corruption case involving a Brazilian construction company.

“All the recent presidents are rotten,” says José Mendoza.

But Mendoza’s frustration isn’t just with Peruvian politicians. It’s with the very newspapers he sells. He says he doesn’t believe the media anymore.

Mendoza says Peruvians “are so manipulated, the whole country’s been manipulated by newspapers and TV stations.”

Lima-based anthropologist Raúl Castro stands next to the Mendozas’ kiosk, listening intently to their commentary. His research is on the impact of tabloids on Peruvian society. A current project of his is categorizing the tabloid papers the Mendozas sell based on credibility.

He tells Castro he doesn’t believe a word he’s saying. “The information you gave about newspapers ... is wrong, wrong,” Mendoza says, peeking his head around the corner of the stand. His sister Graciela nods in agreement.

“They want everything to burn, no?” he says. “They’re saying that nobody tells the truth anymore.”

The day before former President García killed himself, he gave an interview with the national radio and television network RPP. The reporter asked him if he thought this interview could be his last because of a pending arrest on corruption charges.

García said it wouldn’t be his last and that his name would be cleared. 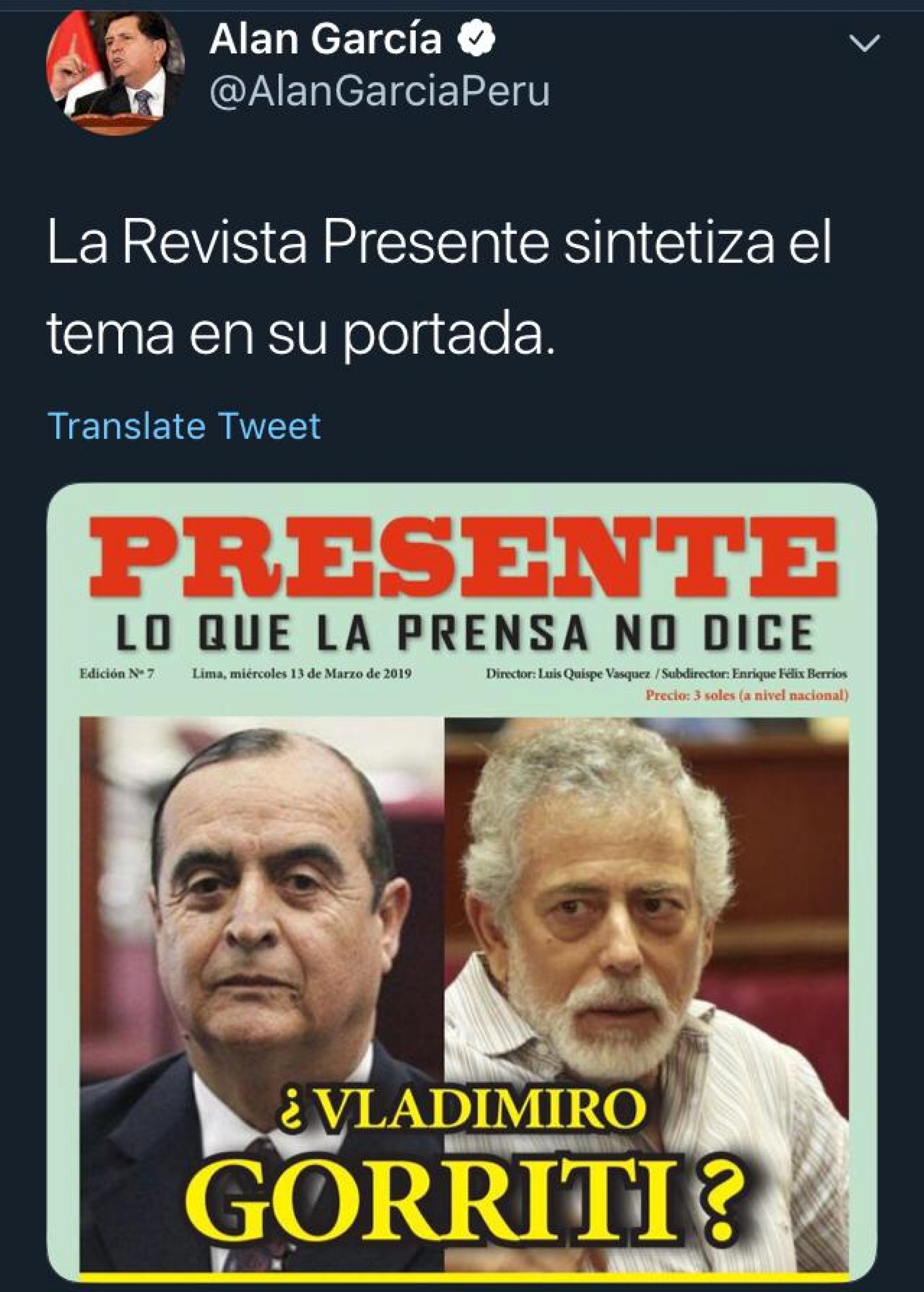 “Every big political story represents a different journalistic challenge,” she says. "But what just happened is the kind of thing we never would have imagined, not even in the worst-case scenario.”

It’s now up to Peruvian media to chase the facts and make sure the public hears the truth. The real truth.